With Chicago Fire of Major League Soccer squaring off against USL Championship side Saint Louis FC in the 2019 Fourth Round, it’s as good a time as any to look back at the rich Open Cup histories of these two great cities.
Jonah FontelaJune 9 2019
Open Cup

Chicago and Saint Louis have stamped their mark on the 106-year history of the Lamar Hunt U.S. Open Cup. Join ussoccer.com for a look back at some of the cities’ most memorable Cup moments with the men who made them happen as our guides.

Willy Roy’s voice goes up when talk turns to the Open Cup of 1965. “Oh yeah, Sure. I remember it!” he says, sitting up a little higher in his chair. His accent is somewhere between Treuberg, Germany and the City of Chicago, where he emigrated in 1950 and has called home ever since. “I remember the two free-kick goals I scored – I can still see them the same way in my mind – and getting together after the games. Even though we lost the Final, it wasn’t the end of the world.” 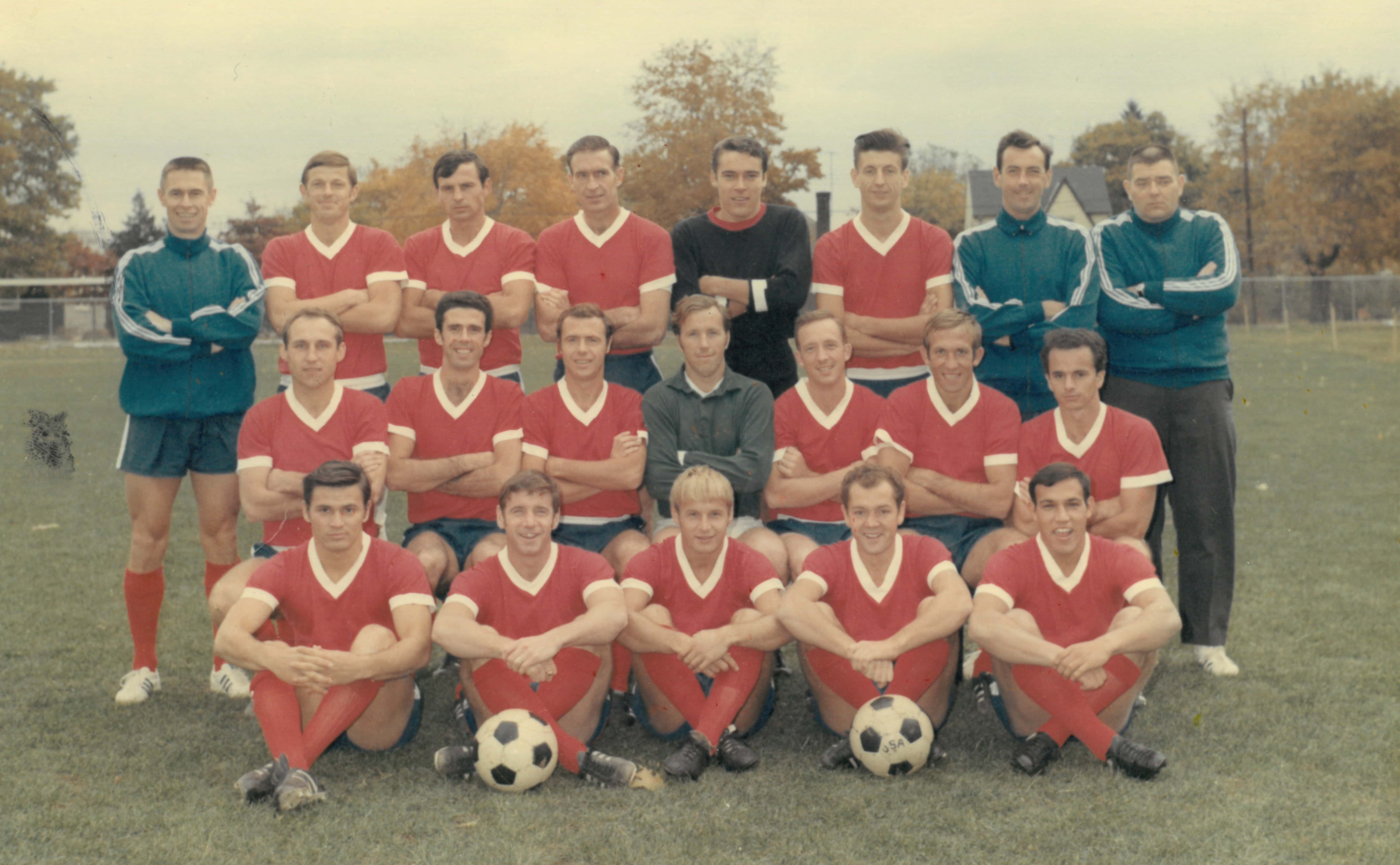 Willy Roy with a smile – middle row & second from right

Roy, now 76, tells it like it is. Like many of his era. His nose has swollen wide across his face to mark the years and he still has a devilish sense of humor. He doesn’t move as quick as he used to, but his eyes light up when he talks of the old days. “I needed money, you know spending money,” he said, surrounded by three of his grandchildren, wearing a sweatshirt bearing a logo of the Chicago Sting, the NASL team where he won titles as a player and coach in the 1970s and 80s. “When I found out that you had a chance to make some extra money if you played well, I joined up and soon had a chance, as a very young man, to play for a U.S. National Championship.”

The team was Hansa, a top club in Chicago’s National Soccer League and the championship was the 1965 National Challenge Cup (now known as the Lamar Hunt U.S. Open Cup). Far from the glitz of today – the soccer-specific stadiums and lucrative sponsorship deals – American soccer was a patchwork of ethnic leagues and workaday semi-pros. “It was a day out for the people,” said Roy, a striker once, and among the very best American players of his generation. “There wasn’t much to do in those days but all the ethnic clubs had their own clubhouse. We had the St. Pauli Bar and we really looked forward to practices on Tuesday and Thursdays and the games on Sunday. After the games, we went to the clubhouse. It was all a part of it.” 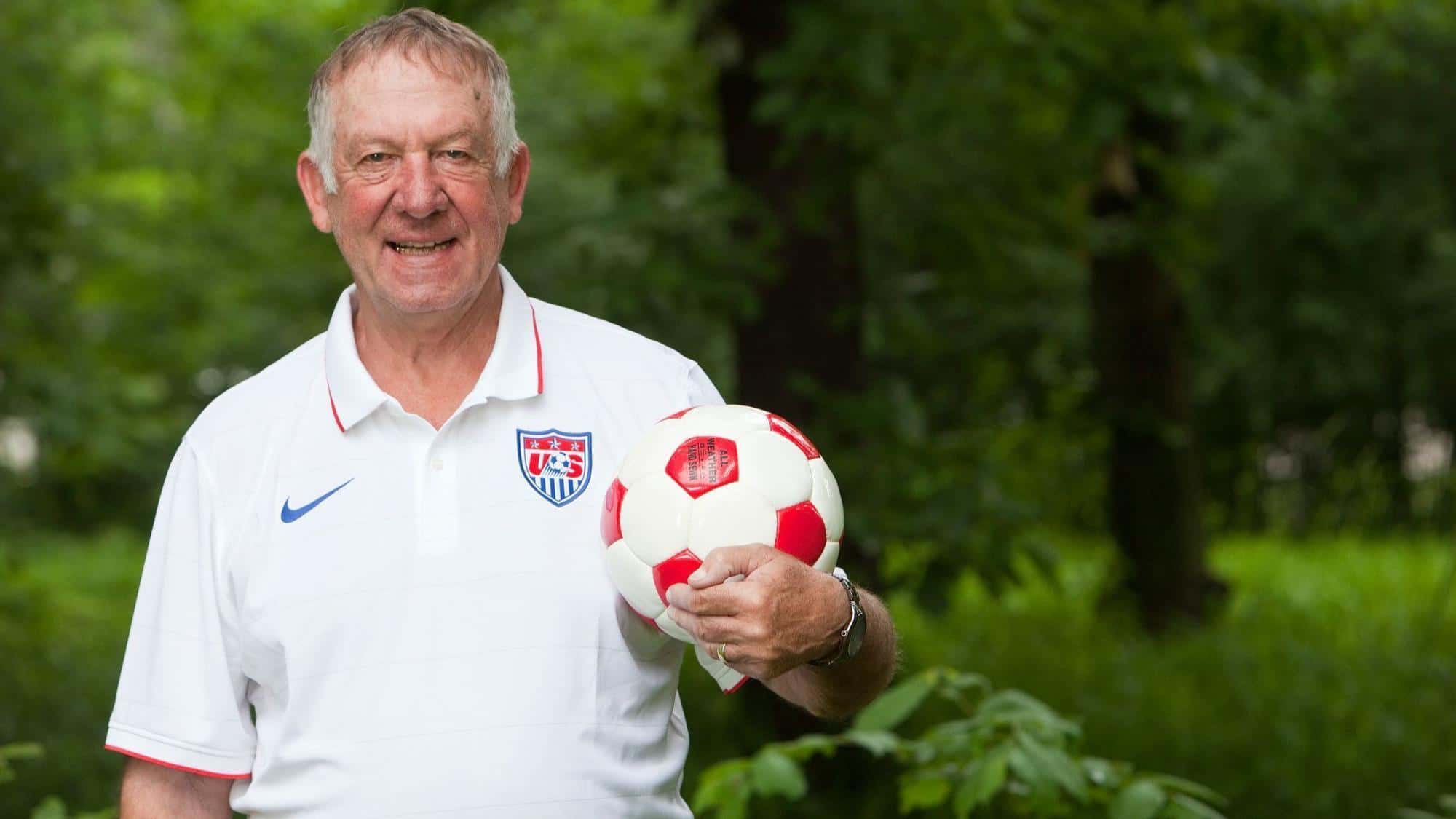 The 1965 Open Cup Final was meant to be a one-game affair at the Metropolitan Oval in Queens, New York – hallowed ground in the history of American soccer. “We had them at 1-0 and time was really running out,” said Roy, remembering his swirling free-kick from 20 yards that put Hansa up a goal on a New York Ukrainians side led by the outstanding Walter Smotolocha. “Then they got a corner-kick really late, maybe 30 seconds to go, they scored and that meant we had to play another game.”

The replay was set for Hanson Stadium on Fullerton Ave in Chicago, a smooth playing surface of all fresh-cut grass. It was paradise compared to the “bumpy, mostly dirt playing surface” Roy described back at the Met Oval. The day’s attendance in Chicago was tallied at 5,000. “That was totally unheard of in those days,” Roy said. “It was incredible to have a crowd like that.” 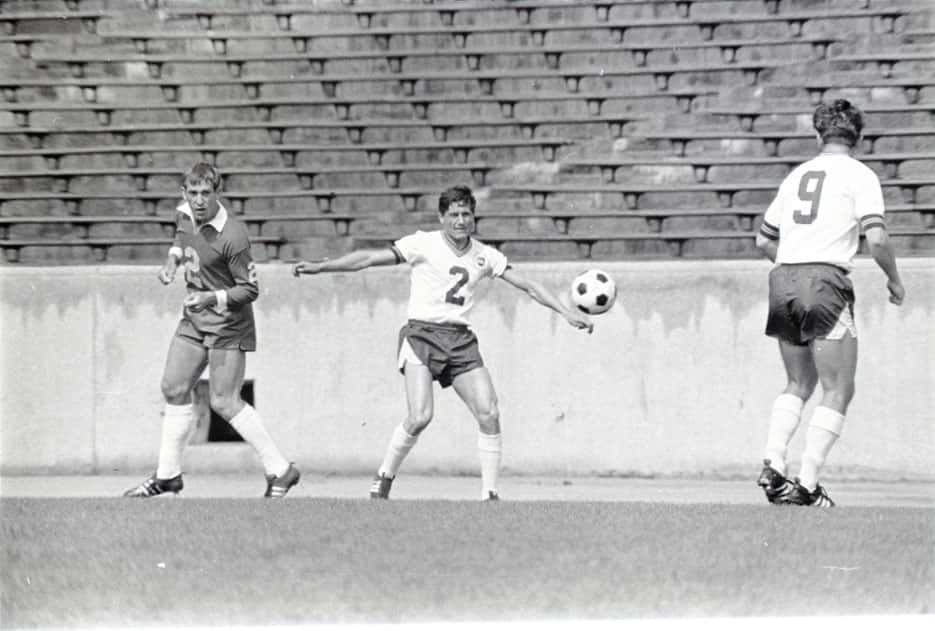 Roy in the dark shirt in action for Chicago Spurs

The replay followed the pattern of the first leg and Roy’s elegant free-kick was equalized late to force extra-time. “We lost our sweeper,” Roy said with a tilt of his head, remembering how the Final ended 4-1 for the team from New York after a deluge of goals in a lopsided extra-time period. “He had a bad concussion and we lost him for the overtime period. That made a big difference.”

While Roy and his Hansa came up short, the Windy City’s had her share of Open Cup glories. Chicago Sparta won a pair of titles in 1938 and ’40. Chicago Viking won theirs in 1946, the first Open Cup Final following the end of World War II. The Chicago Falcons followed up in 1953. More recently, AAC Eagles lifted the trophy in 1990 and Chicago Fire, of Major League Soccer’s slick and fully professional modern-day, dominated in the late 1990s and early 2000s, winning four crowns for the city.

For Roy, it’s the little things he remembers best. He’s not hung up on losing his only Final. The mugs of beer after the game were cold. His two free-kicks sailed past the keeper just so. And the way it felt to score a goal, that never goes away. “I just loved scoring and punishing goalkeepers,” said Roy, who went on to represent the United States 20 times in the 1960s and 70s and became the first American to score in Mexico’s Azteca Stadium. “I was happy when they had to pick the ball out of the back of the net.”

Leave Chicago and drive about 300 miles southwest and you’ll end up in Saint Louis, Missouri. The city made a huge impact on the history of the Open Cup, beginning in 1920 when St. Louis Ben Miller shocked Fore River Rovers of Quincy, Massachusetts. In all, the city can claim 12 Open Cup titles – spread among seven teams and nearly 100 years. Only teams from California, New York and Pennsylvania have more Open Cups than Missouri and that’s all thanks to Saint Louis and its decade-strong romance with the game of soccer.

Through the 1920s and 30s, the City’s teams began to flex their muscles. Teams like Stix Baer & Fuller, Vesper Buick, Scullin Steel, Central Breweries, St. Louis Shamrocks and Simpkins-Ford dominated with Open Cup titles and multiple appearances in Finals. There was no denying that Saint Louis had grown into an American soccer power. And those teams all paved the way for Saint Louis Kutis SC in the 1950s. 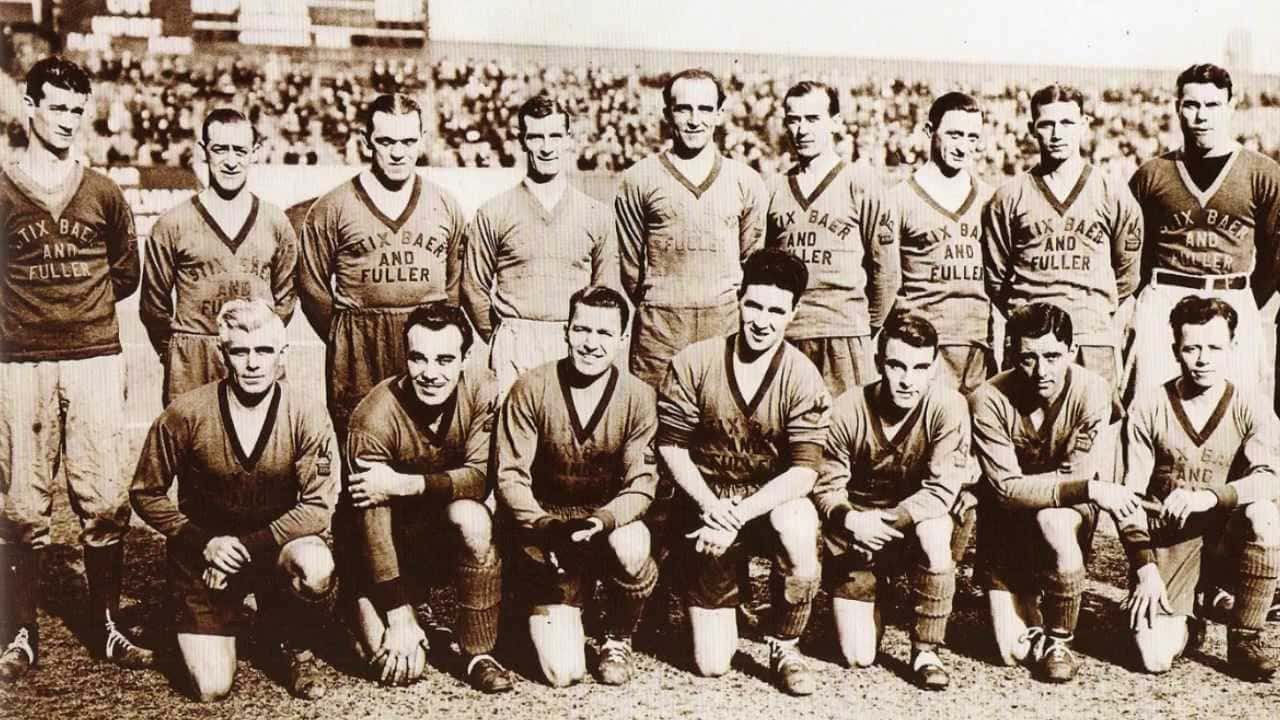 A famous name in the Open Cup – Stix Baer & Fuller

“When we started out we were known as the Saint Louis Raiders,” remembered Bill Eppy, 87, a former midfielder who won the Open Cup with Kutis in 1957. He grew up watching the tail end of the Saint Louis Soccer League’s heroes at Sportsman Park. “In those days you worked a job and played soccer on the side. You didn’t get paid, but you might get a nice Christmas present when the holidays rolled around.”

In the early 1950s, when Eppy joined up, a new sponsor came on board. Tom Kutis, who operated a Saint Louis Funeral parlor, gave the club his name and an American soccer legend was born. The club won seven straight National Amateur Cups in that decade and collected a pair of Open Cups over a 50-year history

Eppy was a no-nonsense defensive midfielder and he missed out on Kutis’ 1954 loss in the Open Cup Final to the NY Americans because he was bouncing from base to base doing his military service. But, he came back and played a critical role in the 1957 side that demolished New York Hakoah 6-1 over two legs in the Open Cup Final series. 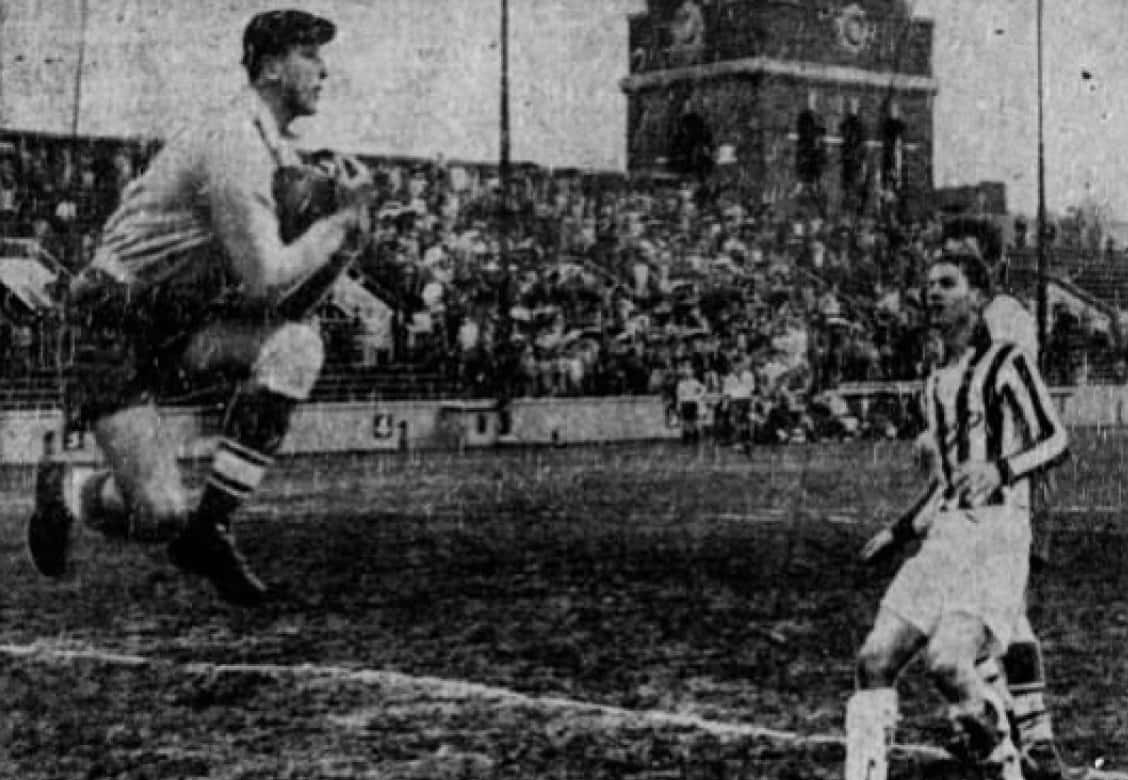 Kutis in the Semifinal of their Cup-winning 1957 run

“It wasn’t much of a party for the team from New York,” said Eppy, who made his living as a machinist for the South Side Machine Works while doing his part in Kutis’ seven consecutive Amateur Cup titles in the 1950s. “I remember they didn’t really have a chance in the game. It probably wasn’t the most exciting Final ever played.”

Eppy has a knack for understatement. He doesn’t make a big deal of the fact that his Kutis side was so good in 1957 that the U.S. Soccer Federation simply signed them all on the spot to represent the USA in World Cup qualifying. All they had to do was change their shirts.

What he remembers best are the differences from then to today. “The game’s so different,” he said. “I see guys today passing the ball around their own penalty area. The last thing I wanted to do was jack around with the ball near my own goal. You make a bad pass back there and it’s Good Night Irene, so I’d just get it the hell out of there. If I played around with the ball back there, back then, I would have heard it from Harry.” 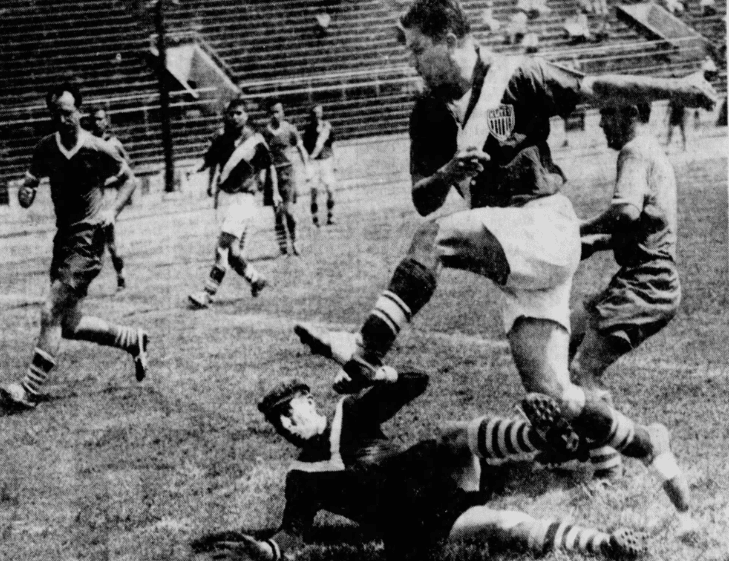 Bob Rooney in action for the 1957 Open Cup winners Kutis

That Harry is one Harry Keough, legend of the American game and a teammate of Eppy’s in that outstanding Kutis team of 1957. Such was the quality of soccer coming out of Saint Louis at the time, five members of the Starting XI of the USA’s 1950 World Cup team – the one that famously beat the English – came from their local league. The likes of hero goalkeeper Frank Borghi, Captain Harry Keough, enforcer Charlie ‘Gloves’ Columbo, Gino Pariani and Frank ‘Pee-Wee’ Wallace all hailed from Saint Louis.

“Back then we played with four attacking players and we had some really good forwards,” Eppy remembers, not laboring much on the celebrations and the lifting of the Cup or the one-sided 6-1 scoreline in the 1957 Final. “Harry [Keough] ran the whole show and we had it set up so that we scored a lot of goals.”

A man of precious little ego, humble and quiet, Eppy prefers to rattle off the names of his teammates. “Ruben Mendoza, he was some player. We had “Butch” Cook. God knows what his real first name was. And there was Harry of course and Looby and Herman Weckie,” he pondered the names from the old days, his voice drifting back. “I don’t remember lifting the trophy, but I can bet you it’s back there in Kutis’ funeral parlor with all the rest.”

“My dad isn’t the kind of guy who talks too much about his achievements,” said 57-year-old Joe Eppy, one of Bill’s six kids and, just for good measure, an Open Cup Champion with Kutis in 1986.

“He [Bill Eppy] was there at the Saint Louis Soccer Park [the venue hosted six straight Open Cup Final Fours from 1984 to 1989] when we won it in 86 and he came down on the field after it was over,” said Joe Eppy, who followed in his father’s footsteps capturing elusive Open Cup glories. “He didn’t say much except to congratulate me and say we had a good team and that we did a fine job. But thinking back, it was a pretty amazing thing to climb the same mountain he did.” 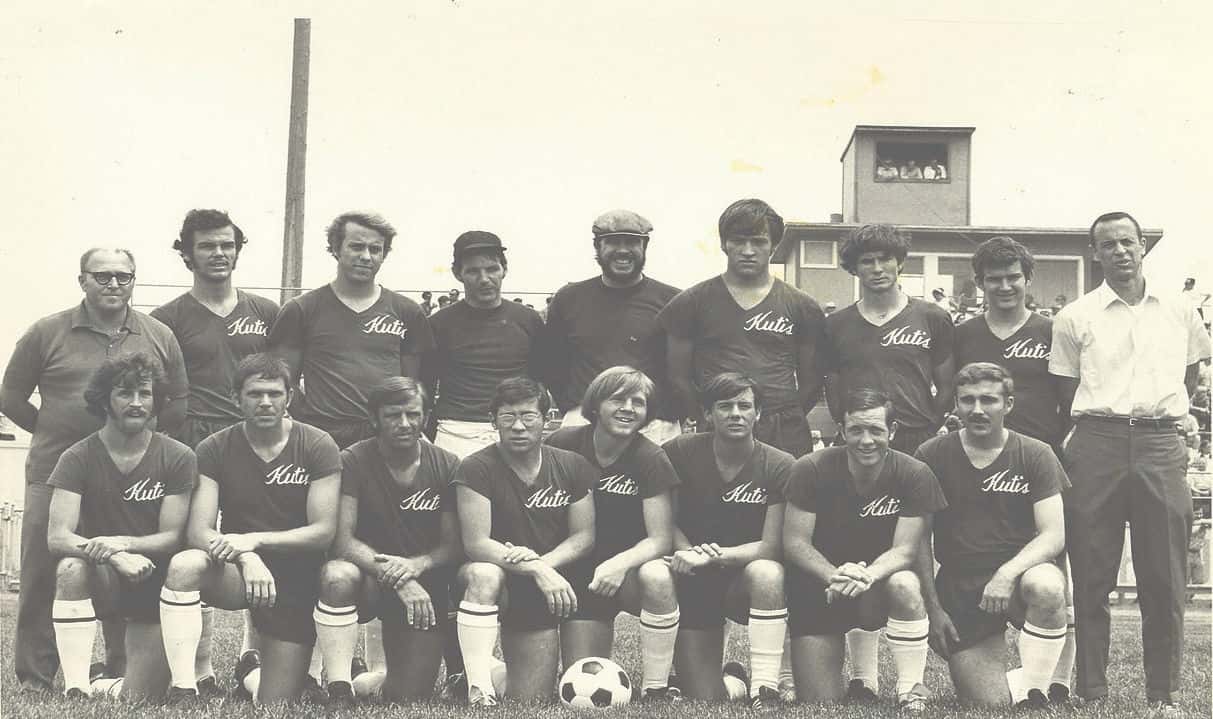 The 1986 Open Cup trophy still sits on proud display in the late Sam Kutis’ funeral parlor – operated now by his own kids and grandkids. “It’s there. The Cup with the game ball stuck inside it,” said Joe Eppy. It’s not far from where trinkets of his own dad’s glory days still sit in pride, behind glass and taken out only for a respectful dusting now and then. “It’s kind of weird. Someone will die and I’ll get a call from someone telling me ‘Hey I saw your picture and the old trophies.’”

Joe Eppy doesn’t remember a wild celebration after the 1986 win over San Pedro’s Yugolsavs. “We played two games in two days and we were pretty gassed. Plus it was a Sunday and we all had work the next day,” he said, remembering back to that special moment the same as his dad did 30 years earlier. “But I think I remember going into work with a hangover on Monday. I think a lot of us did.”