Coach Simon Elliott is drawing on his past as an Open Cup-winning midfielder ahead of his Sacramento Republic’s Fourth Round date with his one-time club San Jose Earthquakes.
Frank Dell’ApaJune 10 2019
Open Cup

Simon Elliott wasn’t the most glamorous player, but that didn’t discourage top coaches from seeking him out. It started with Bobby Clark, who coached Elliott with the New Zealand national team, then brought him to Stanford University. After that, Elliott played for John Kerr and Steve Nicol at the old Boston Bulldogs, Sigi Schmid (LA Galaxy) and MLS Cup winners Frank Yallop and Robin Fraser among others.

It stands to reason, with that type of early influence, that Elliott would make a successful coach himself someday. And the record is bearing him out as Elliott has guided the Sacramento Republic to a 29W-14L-10D mark in the space of two seasons. The Republic stands in sixth place in the USL Western Conference and has advanced to a Fourth-Round Lamar Hunt U.S. Open Cup meeting with one of Elliott’s former teams, the San Jose Earthquakes, after dramatic wins over Reno 1868 and Fresno FC. 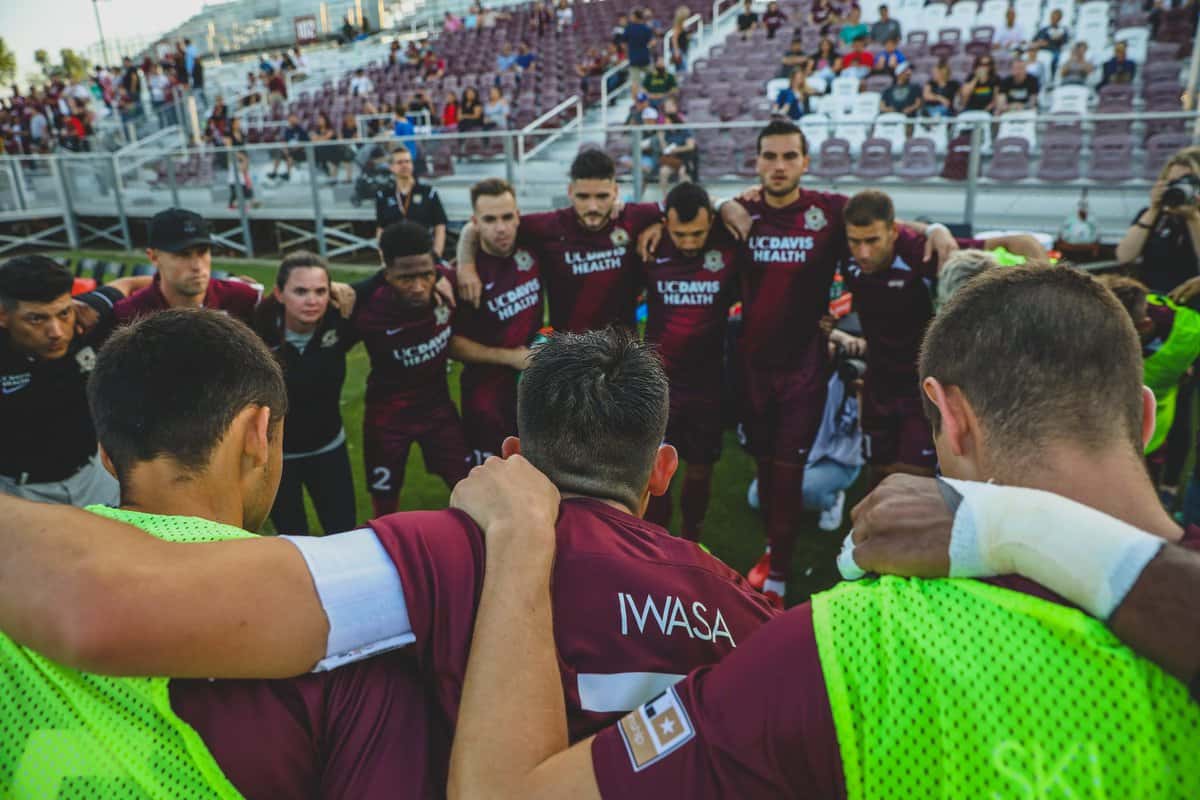 “The rules were different then, and you could only have three foreigners in the team,” Elliott, 44, said of his start in Major League Soccer in 1999. “New Zealanders are not the go-to choice of foreigners here – anywhere, really. They want high-profile guys from strong soccer countries. But if you want to do it bad enough you find a way.”

Elliott was not selected in the 1999 MLS SuperDraft. So Kerr and Nicol, who were player-coaches with the Bulldogs, brought Elliott to play for the USISL team in Framingham, Massachusetts. Elliott would play three games for the team and might have stayed longer, but Sigi Schmid was hired by the Galaxy on April 22, 1999 and Elliott’s was one of his first names he put down on his wish-list. 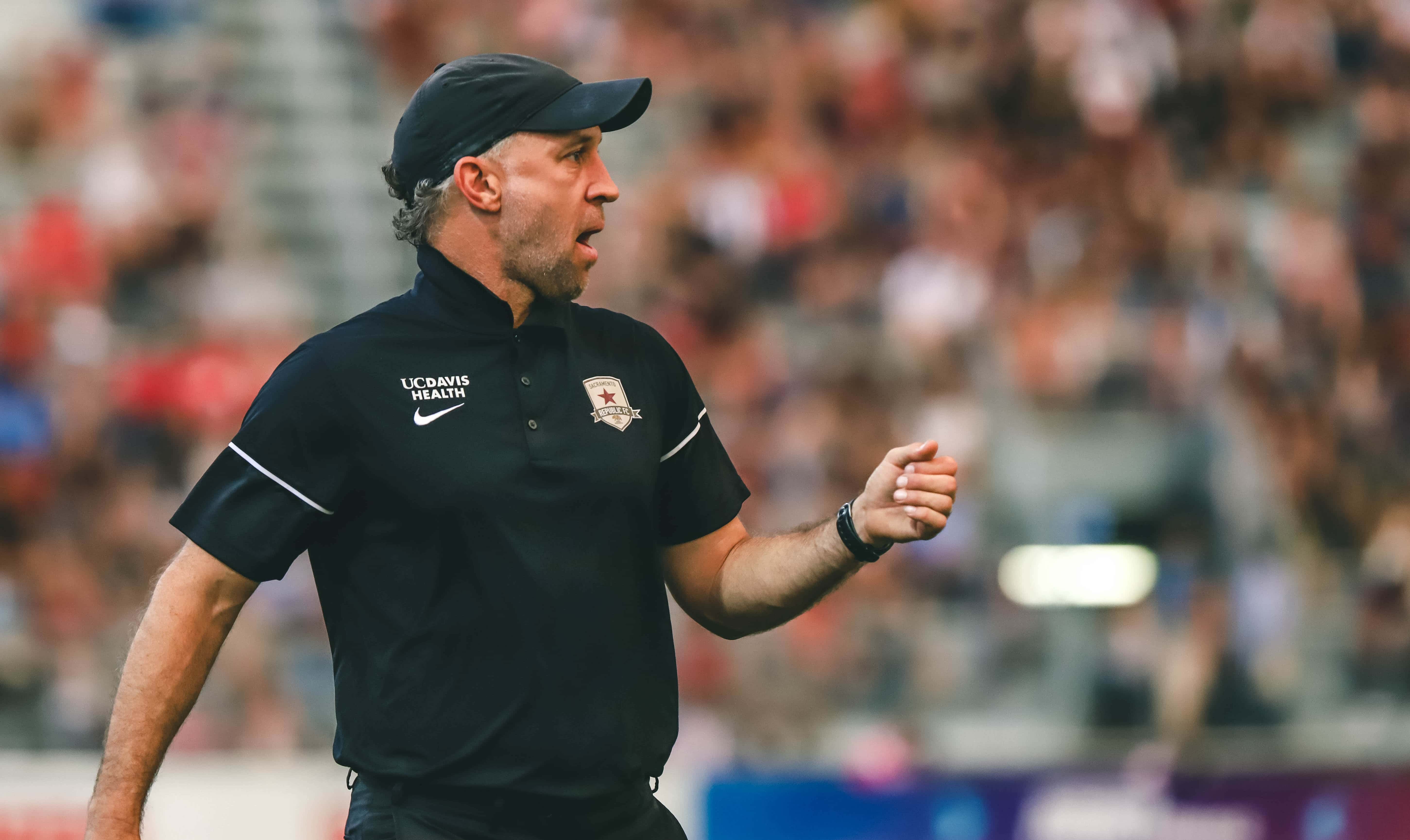 Schmid would go on to become MLS’ winningest coach, and his first trophy would be the 2001 U.S. Open Cup, with Elliott anchoring the midfield. “We had a good team in those days,” Elliott said. “We had lost in the Final the year before and I hardly remember details of the game but it’s a fun competition. We played at Fullerton and I remember the photo of the team with [Phil] Anschutz.”

Anschutz, one of MLS’ most reclusive investors, shed his shyness as the Galaxy took a 2-1 golden goal victory over the New England Revolution at Titan Stadium on Oct. 27, 2001. He raced out of the press box, pulled out a victory cigar, and joined the Galaxy in an on-field celebration as the team overcame the frustration of a third MLS Cup Final defeat the previous week. “It meant an awful lot to us and it meant a lot to him,” Elliott recalled. “He was a big supporter of the Galaxy and the league and, obviously, he still is. It’s pretty cool how much it means to folks.”

The Galaxy appeared on the way to another defeat in the ’01 final as the Revolution’s Wolde Harris opened the scoring in the 30th minute. But with the Galaxy pushing for an equalizer, the Revolution’s Andy Williams missed an open net after pulling Kevin Hartman out of position. Ezra Hendrickson equalized for the Galaxy, curling a cross into the far corner of the goal over Jose Carlos Fernandez in the 69th minute. Schmid added aging veteran Alexi Lalas as an extra striker as the Galaxy went into extra-time with a numerical advantage (Jay Heaps had been red-carded for the Revs in the 88th minute), and Danny Califf headed in a 92nd-minute decider. 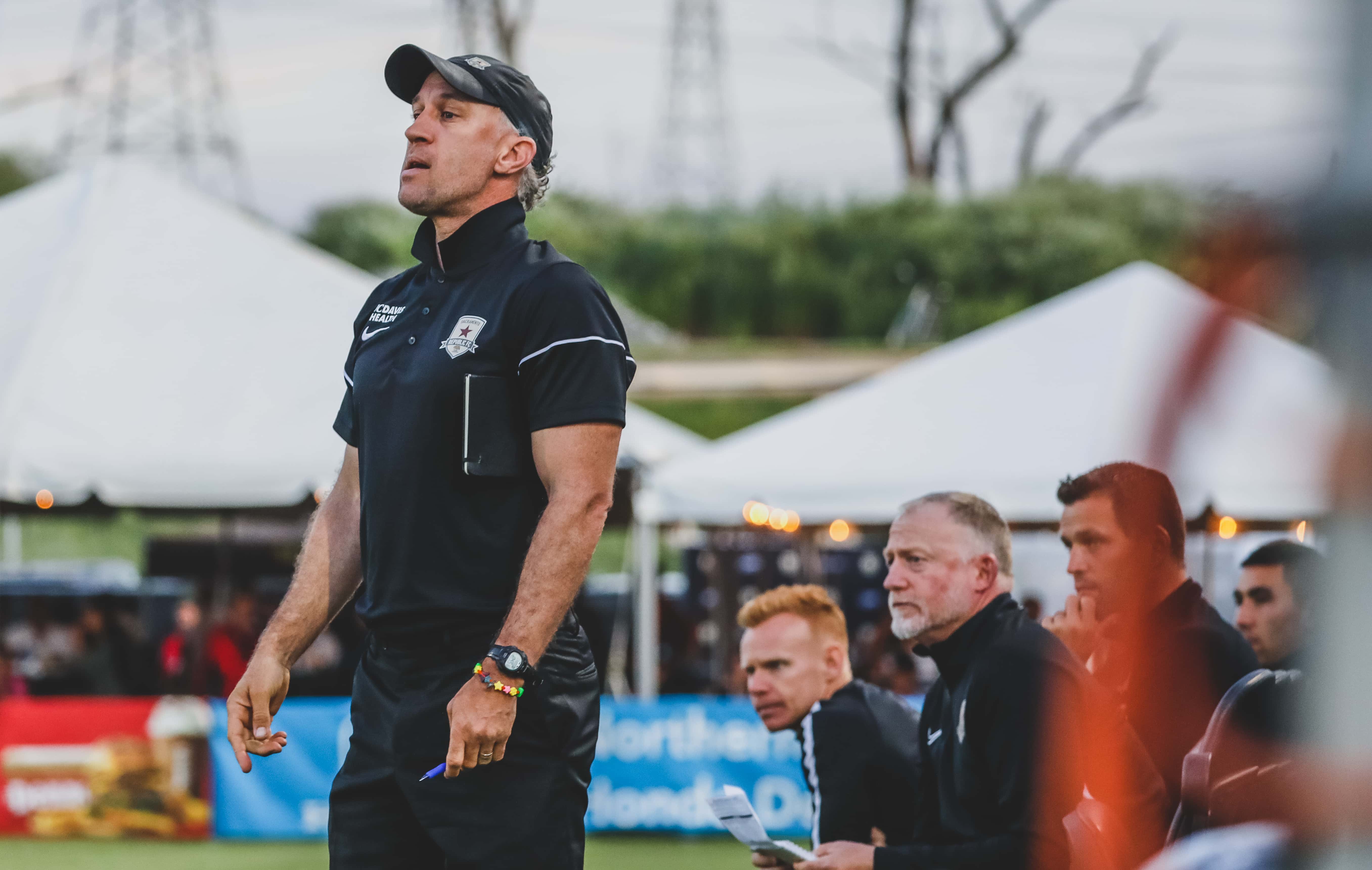 The Galaxy lineup that day included two other current coaches whose teams are alive in the 2019 edition of the U.S. Open Cup: Paul Caligiuri (Orange County FC) and Ezra ‘E.Z.’ Hendrickson, now an assistant with the Galaxy.

The ’01 final filled Titan Stadium with an attendance of 4,195. The crowd likely would have been greater had the Final been awarded to the Revolution, who’d planned to stage the match at Foxboro Stadium. But Anschutz hungered for a championship, regardless of the size of the crowd, and successfully lobbied for the Galaxy to host the Final instead. A year later, the Galaxy defeated the Revolution, again in extra time, for the MLS Cup before 61,316 at Gillette Stadium.

A finish for the books! 🗣📚@SacRepublicFC takes down @FFCFoxes in a back-and-forth battle on the LAST touch of the match!

“Sigi was a motivating guy, he loved the game and worked very hard to make his teams competitive and hard to play against,” Elliott said. “When he was at UCLA and I was at Stanford we played each other and that’s how he knew me. He had a number of guys from UCLA, and guys like Mauricio Cienfuegos were already there, and he drafted some younger guys to complement them. He was starting his MLS career and he had vast experience, so he knew exactly what he was doing, so he let guys get after it in training and the team coalesced that way.”

Elliott played for the Columbus Crew’s 2004 Supporters Shield-winners under Greg Andrulis and moved to England and Fulham under Chris Coleman in 2006. Elliott’s stay with the Whites ended because of injury before he could compete in an FA Cup match.

“It’s great, highly competitive, and it’s perform or you’re done,” Elliott said of the Premier League. “Pretty simple. It’s real clinical over there. It is intense, incredibly fast-paced and that’s why people watch it around the world. It was a valuable experience in a lot of ways. I probably learned more from the bad stuff – I tore my Achilles and it was a real grind.” 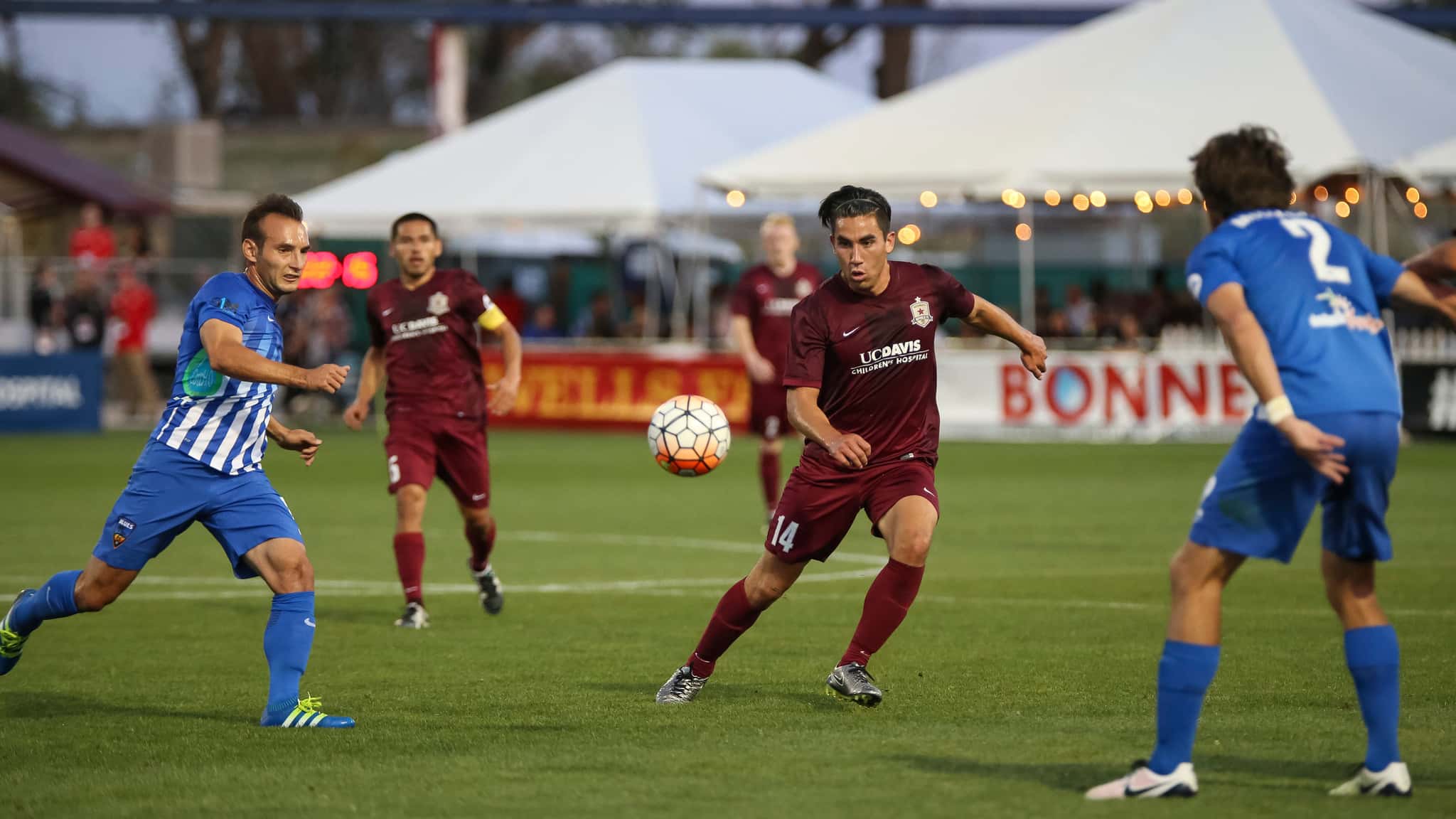 Elliott recovered to join the San Jose Earthquakes under Yallop’s direction, made three starts in the 2010 FIFA World Cup with New Zealand and concluded his MLS career with Chivas USA. Elliott worked as technical director of Chivas USA and with the Republic Academy teams before being named head coach in Sacramento last season after the departure of Paul Buckle.

With the Republic, Elliott has tapped into his Stanford connections for Drew Skundrich and Sam Werner, who combined on the deciding goal in a 1-0 victory over Reno in a rainstorm in the Second Round of this year’s Open Cup. In the Republic’s 1-0 extra time victory over the USL Championship side from Fresno, Stefano Bonomo, another Bay Area product, headed in on the final touch of the match.

“I think we have a good team, good potential,” Elliott said “Our performances haven’t been there. We have to be more consistent and we have to be correctly tuned in to compete at the top. Playing an MLS team is a challenge. We’re certainly the underdogs, being a USL team. Everyone talks about the one-off game and you never know.”