With unforgettable memories of helping the New England Revolution win their first Open Cup in 2007, Michael Parkhurst is eager to do the same with new club and defending MLS champs Atlanta United ahead of a Semifinal tilt with Orlando City.
Frank Dell’ApaJuly 30 2019
Open Cup

It would be understandable if Atlanta United captain Michael Parkhust were looking ahead in the 2019 Lamar Hunt U.S. Open Cup. He wouldn’t be the only one eagerly anticipating a Final at Mercedes-Benz Stadium, which could attract a record-shattering crowd for the 106-year-old competition.

Atlanta United broke attendance records last season, with 73,019 (69,004 turnstile count) arriving for the MLS Cup final, a 2-0 victory over the Portland Timbers. The teams could be matched againt in the 2019 Open Cup Final, scheduled for August 27. If so, attendance will likely surpass the listed 41,012 (32,347 turnstile count) crowd that arrived for the Open Cup Round of 16 match at Mercedes-Benz last year and broke all previous attendance records for the tournament.

But, first, United must get past a tricky Semifinal showdown with Orlando City SC. “We’re two games away,” Parkhurst, 25 times capped for the U.S. National Team, told usopencup.com. “And we play an Orlando team that’s been up and down a little bit, but they are tough to play and they’re on a good run in this tournament. We have a rivalry with them and it’s going to be an intense game. But we know if we get by them we host the Final. And no matter who we play in the Final we like our chances.” 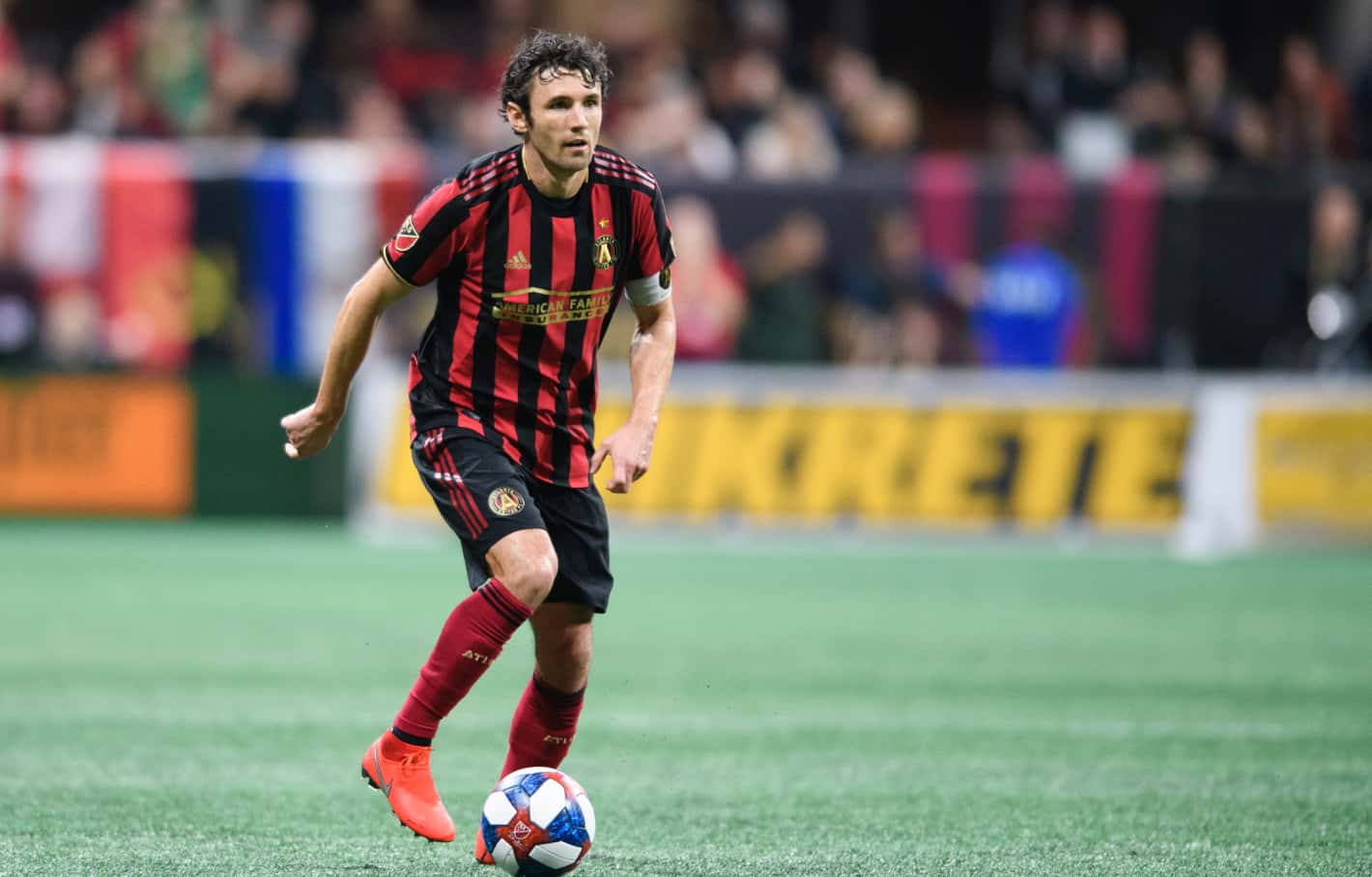 Parkhurst in action with Atlanta United
Atlanta United needed just two seasons to conquer Major League Soccer. But the U.S. Open Cup has been difficult for the Red & Black. They made it to the Round of 16 in their first two seasons, eliminated following a 3-2 result at Miami United [then of the second-tier NASL] in 2017 and a 1-0 loss to the Chicago Fire at home last year.

Going for the Cup

This year, Atlanta United have swept past the Charleston Battery (a 3-1 extra time victory after the initial match in South Carolina was postponed), the Columbus Crew (a 3-2 away win) and St. Louis FC (a 2-0 home victory).

“You have to win five games to win the trophy, so we wanted to get after it,” said Parkhurst, a steadying force in the Atlanta United defense. “We hadn’t gotten past the Round of 16 in our first two seasons and now we have the championship in sight. We understand what it takes to win in playoff games and the Semis are basically a playoff game, one and done. We’re confident but not overconfident.” 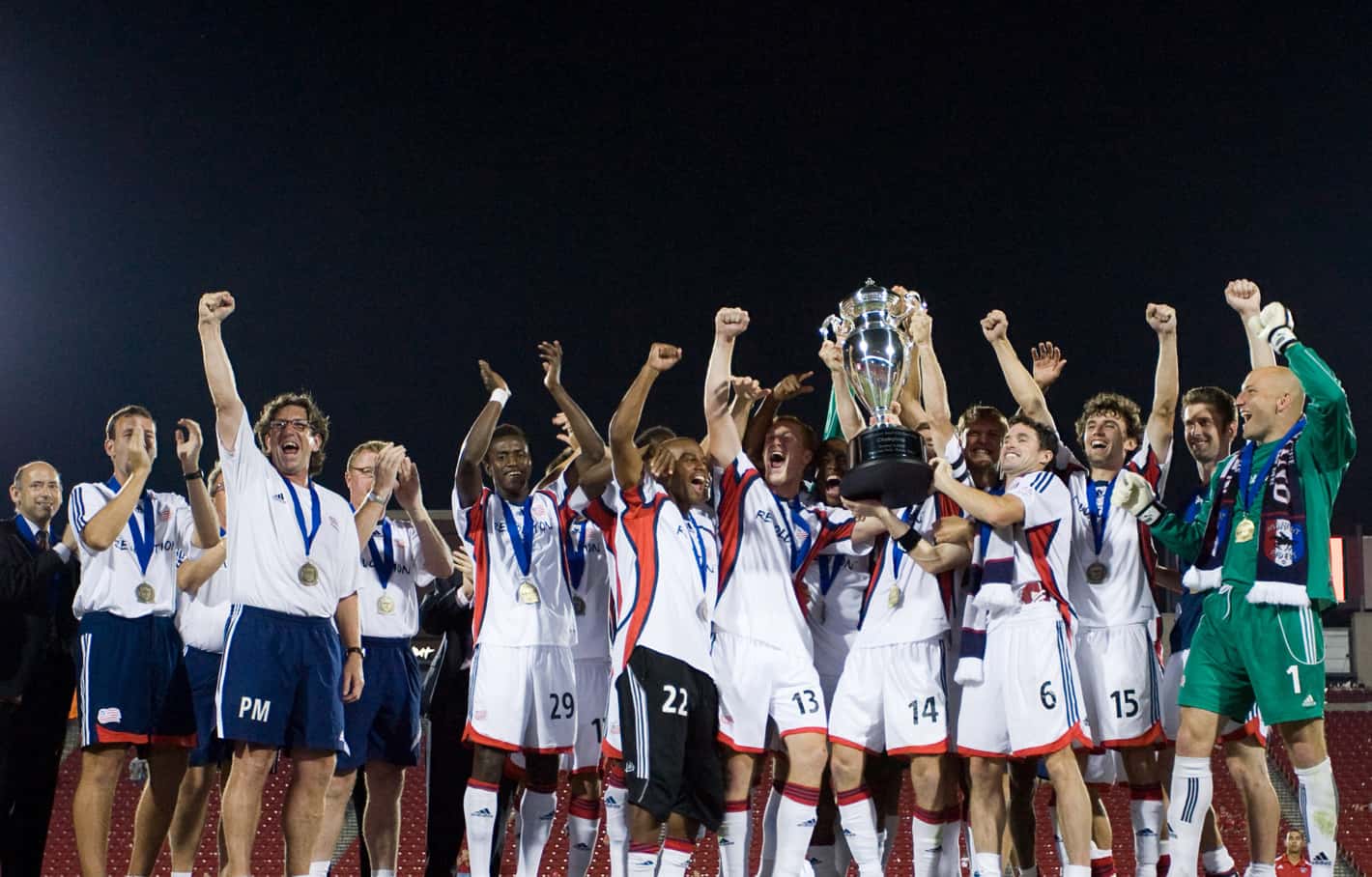 Parkhurst raising the Open Cup with the Revolution in 2007
Parkhurst has been there before. He and his Atlanta teammate Jeff Larentowicz won the 2007 Open Cup with the New England Revolution, taking a 3-2 victory over FC Dallas. That would be the Revolution’s only trophy out of six Finals (four MLS Cups, two USOCs) from 2001-07.
“To be part of a club that won the first trophy in team history was fun,” said Parkhurst, who was also named MLS’ Defender of the Year in 2007. “Back then, under Stevie [Nicol] we approached the Open Cup differently. We rotated heavily in the tournament, but in the Semis and the Final, we played more first team guys and stuff. Once you get on a run in the tournament it’s always special. It brings the team together and you have a good time. You’re fighting for the trophy and the Revs had lost a few Finals before that. And just to be there and have it in the locker room showed we can win trophies, we’re champions, we’re not a cursed team forever. That was big, for the older guys, especially, who had been in the Finals before.”

In that 2007 decider, the Revolution returned to then Pizza Hut Park, where they lost in the 2005 and ’06 MLS Cup finals. This time, New England got off to a 2-1 halftime lead. Goals by Pat Noonan and Taylor Twellman countered Dallas’ Arturo Alvarez strike. Wells Thompson upped the advantage to 3-1 in the 57th minute and the Revolution held on after Abe Thompson cut the deficit, seconds after coming on in the 64th minute for the final 3-2 scoreline.

“When you make runs like that there are unsung heroes,” Parkhurst remembered. “In the Final, Wells Thompson scoring a goal – he’s not a guy you look back and remember for scoring a lot. But he helped deliver the first trophy and we were all happy for him, a great guy and hard worker. It sticks out when somebody young on the team steps up big.”
Actually, Parkhurst was the Revolution’s youngest starter in the 2007 USOC Final. But he performed more like a seasoned veteran than a 22-year-old in his third professional season. Parkhurst’s positioning and savvy were key to the Revolution’s 3-5-2 alignment, flanked by Jay Heaps and Trinidadian international Avery John on the back line. During the 2007 season, Parkhurst committed a total of five fouls, and was cautioned only once – in the first game of the playoffs. 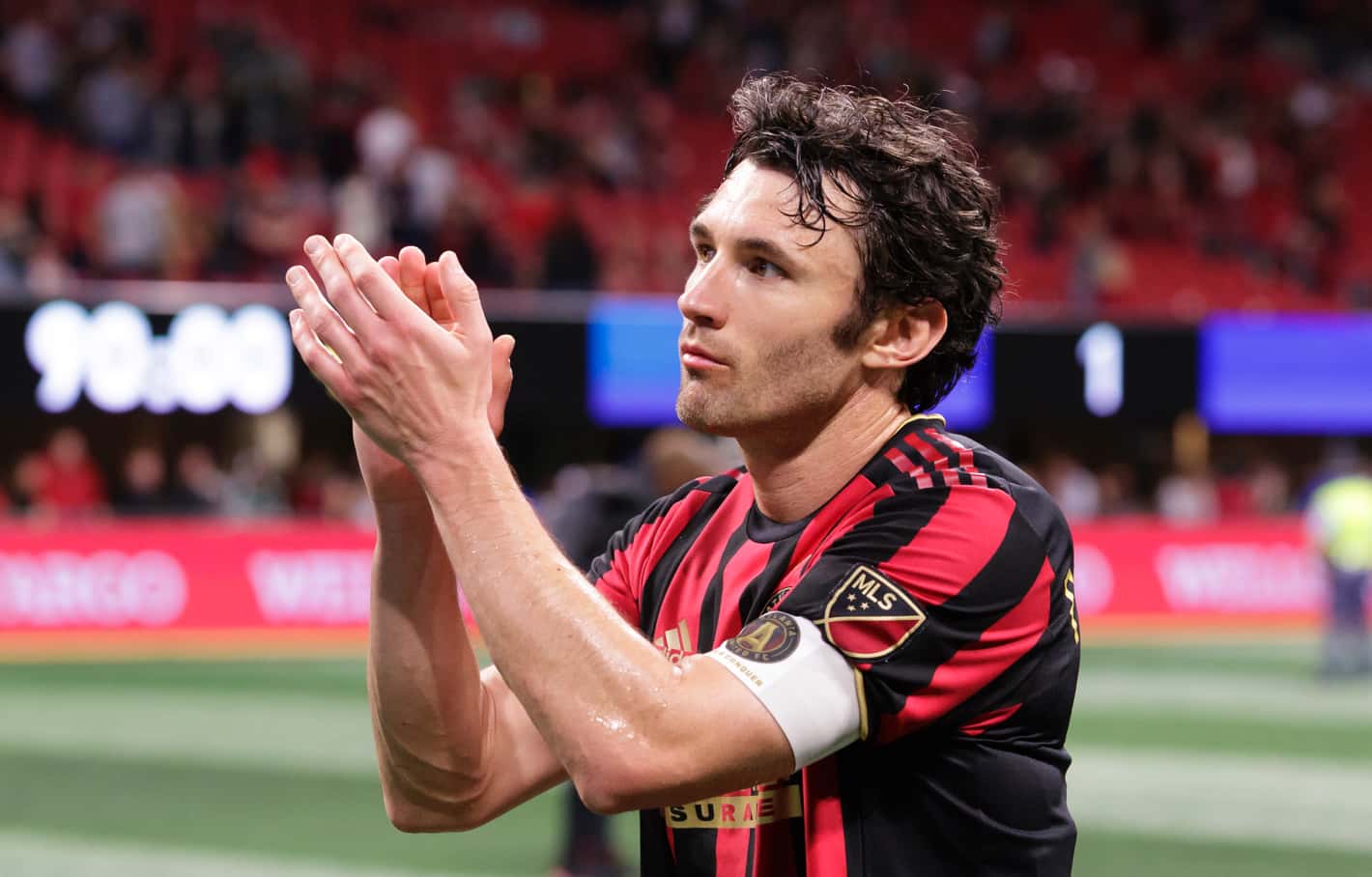 Parkhurst brings experience and a level head to a youthful Atlanta United
Now 35, Parkhurst remains a paragon of efficiency, expert at defusing attacks before they get started, and also guiding younger defenders such as Miles Robinson in the ways of the professional game. Parkhurst set the tone in the MLS Cup Final last season, poking away a Timbers’ clearance and finding Josef Martinez for the opening goal.
This season, Parkhurst has mostly played outside back, returning to the position he briefly converted to with Nordsjaelland’s Danish Cup champions in 2010 and ’11. “We’ve been a little more inconsistent,” Parkhurst admitted. “Last year by this time, it was us and the Red Bulls going back and forth for first place and we mostly stayed up there the rest of the season. This year, we started slower. There was Champions League and a coaching change, personnel change, as well. We fought through that and we’re more confident now.”

Driven on by a Famous Foxborough First

Parkhurst grew up in Cranston, R.I., about from 40 miles from New England’s headquarters in Foxborough, Massachusetts. Parkhurst was eight-years-old when he was converted to a defensive role under the coaching of Stacey DeCastro at Bayside United. When the Revolution played their inaugural home game, a 12-year-old Parkhurst was in the stands at Foxboro Stadium. Nine years later, Parkhurst joined the Revolution as a first-round SuperDraft choice, earning a starting role on MLS’ Opening Day in 2005.

Parkhurst, who re-signed with United before the season, has ruled out a return to his original MLS team. “When my time’s up I’ll probably be playing here,” he said.
But he retains strong memories of his 2007 Open Cup success with the Revolution to this day, drawing motivation from lifting the trophy in the away locker room in Dallas. “We were the first and that makes it more special,” Parkhurst said of winning the Open Cup. “There will be, I’m sure, a second and third, but it was fun and special. And we have the same opportunity here to be the first to win it. We could potentially hold both trophies for a little bit, at least, and possibly longer.”
Tags
Open Cup
2019 US Open Cup