Ozzie Alonso is a legend of the U.S. Open Cup’s modern era and he’s hoping to add a fifth title in Minnesota to the four he won in Seattle with the Sounders.
Jonah FontelaJuly 29 2019
Open Cup

“Winning trophies is winning trophies,” announced Osvaldo Ozzie Alonso, the holding midfielder toiling in the background at free-scoring Minnesota United on the eve of their first Lamar Hunt U.S. Open Cup Semifinal. “This club has never been to a Semifinal before, and I want to transmit my spirit and my memories of what it takes and what it means.”

While the game against the Portland Timbers on August 7 in Saint Paul will be Minnesota United’s first time in the Last Four, it’s Alonso’s seventh. And during his time with the Seattle Sounders, he won more than he lost. Over ten seasons in Washington State, he won an MLS Cup, one Supporters Shield and an astonishing four U.S. Open Cups. Known both as the Corazon de los Sounders and the Honey Badger for his harrying holding work in the middle of the park, he knows what it takes to get his hands on silverware. Alonso lifts the U.S. Open Cup with Seattle in 2009 – photo Brad Smith/ISI
“I have a special feeling for this Cup,” Alonso told usopencup.com, remembering back to 2008 and his first year playing in the States. At the second-tier Charleston Battery, he made history by reaching the Final (the last time a non MLS team managed the feat). It was only a few months after he defected from Cuba while on international duty at the 2007 Gold Cup. He slipped away from his minders at a Wal-Mart, asked the first Spanish speaker he found to borrow his phone and boarded a Miami-bound Greyhound bus with just 700 dollars in his pocket. “It was tough. I had no English. No family. Nothing. I was on my own,” said Alonso, who was just 21 at the time. “But I had soccer, so I tried to improve and play the best I could. I didn’t have anything else, but I was grateful for the game.

Alonso was the Battery’s top player in that historic run to the 2008 Final. He started all six games and scored a pair of goals. “He was impossible not to notice,” said Mike Anhaeuser, coach of the Charleston Battery eleven years ago and still to this day. “He was the driving force for us that year and he was one of five or six guys who just had a pure winning mentality. And look what he ended up doing…”


Alonso ended up becoming a genuine legend in Major League Soccer. In his ten years with the Sounders, he was named to the league’s All-Star Team four times and its Best Eleven once. His battle and scrap in the midfield kept the ball up for Seattle’s array of excellent attackers and he was every inch the thumping heart of a franchise that won five trophies in seven years. You could argue that in a team with such icons as Clint Dempsey, Obafemi Martens, Fredy Montero, DeAndre Yedlin and Chad Marshall, it was Alonso who was the club’s most important player since their arrival in MLS in 2009.

Alonso with the captain’s armband for Minnesota against New Mexico United
“We have seen many great players at our club, but none have had as much influence as Osvaldo Alonso,” Sounders head coach Brian Schmetzer said upon his skipper’s departure last year. “His drive and determination to win was evident from the first day of training, his first game.”

Alonso scored a late goal in the 2011 U.S. Open Cup Final to seal a win over Chicago Fire and he battled his way through to the trophy in 2009, 2010 and 2014 as well. But his most precious memory of the Cup he is now inextricably linked with came in 2009, his (and Seattle’s) first year in MLS. “I had a bad taste from the loss [with the Battery] in the Final in 2008 to D.C. United,” said Alonso, now 33, who wore the captain’s armband in Minnesota United’s 6-1 come-from-behind rout of New Mexico United in the 2019 Quarterfinal. “It felt like revenge for that loss the year before. It was a special feeling, and I remember it even today if I close my eyes.”

But Alonso, a pragmatist and a glutton for trophies, knows better than anyone that those days are long in the past. What’s important now is the job ahead in Saint Paul.

Darwin Quintero (five goals in three Open Cup games) and Angelo Rodriguez (four goals in three Open Cup games) are lighting up the scoring charts and indulging in elaborate celebrations as Minnesota United continue a scoring tear in their first Open Cup run of any consequence (13 goals in three games as a team so far in the 2019 Cup). And all the while, Alonso quietly goes about his business of keeping the ball where his teammates in attack can put it in the net. It’s a job he’s mastered in his decade in Major League Soccer. 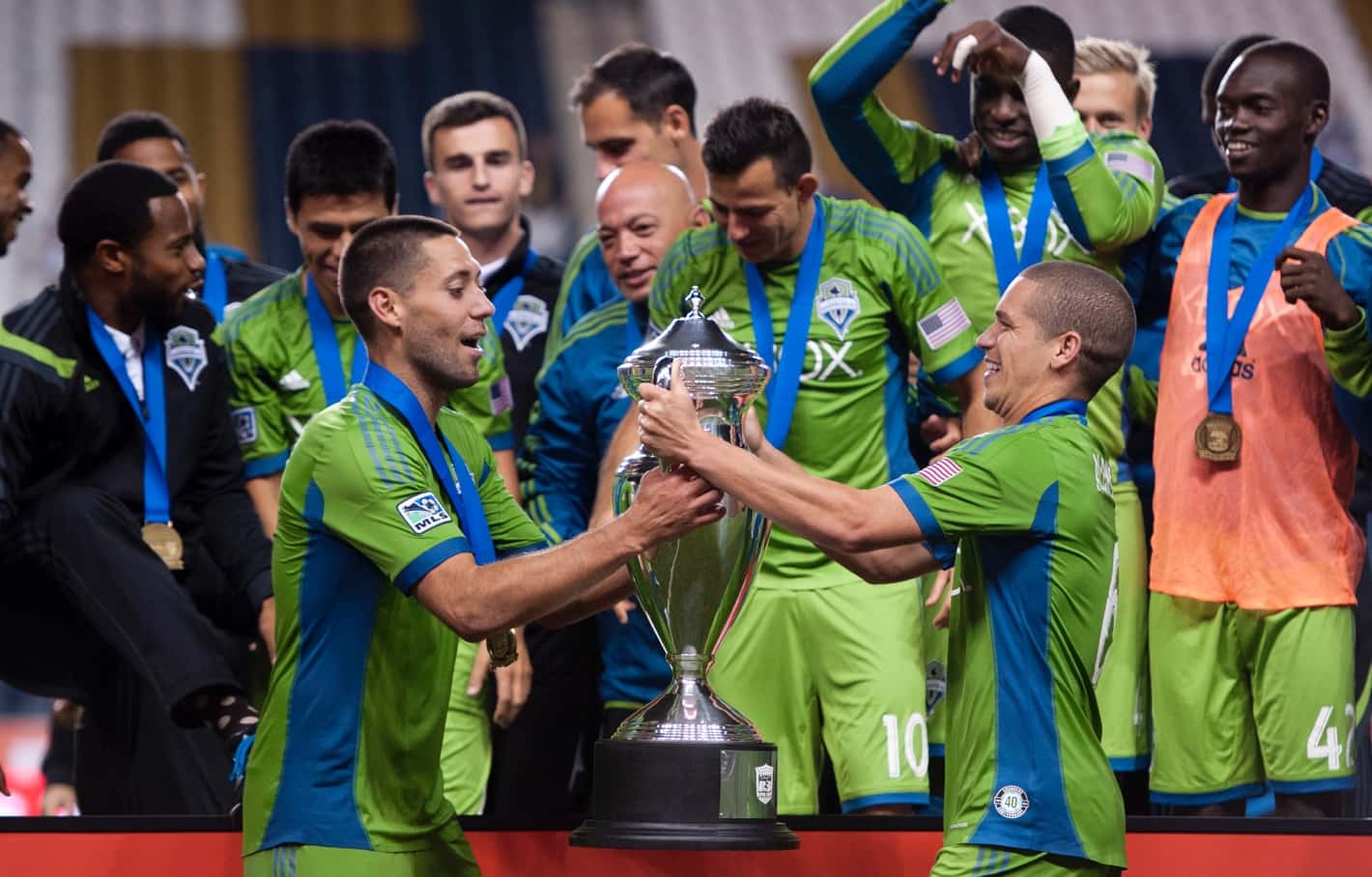 Alonso and Clint Dempsey with another Open Cup for Seattle
“It’s not always easy doing what I do,” said Alonso, whose new club has already knocked out both of the last two years’ Open Cup champs (Sporting KC and Houston Dynamo). It’s my job to connect defenders to the attackers. Sometimes it’s hard and you have to battle. But I’m always happy to do the dirty work. It’s my job. You don’t always get the goals or the assists, but I’m here to support my teammates and get the ball up there where Darwin and Angelo can get the goals. Because goals win games and goals win trophies.”


Another Cup in Minnesota?

There’s that word again. Trophy. In his Cuban accent, from his hometown of San Cristobal in a country he can no longer return to, Alonso says the word in a hush. He says it as if it’s sacred. “I’ve won four Open Cup trophies and all of them are special to me,” said the midfielder who credits former Sounders Coach, the late Sigi Schmid, for helping foster a love and appreciation of the 106-year-old tournament. “Here in Minnesota, the club hasn’t won a trophy yet, and we’re one win away from being able to fight for one. This is what I want for this club. This is why I’m here. I want to bring one here, for me, for my teammates and for the fans. For everybody.”

The fans in the Twin Cities have been coming out in droves to support their first-time Semifinalists at the state-of-the-art Allianz Field, the newest soccer-specific wonder on the American scene. It’s a long way from where Alonso came up watching his dad play in Cuba and first feeling that desire to win and sacrifice to get better. “People are coming out to the games and you know you’re doing something right,” the midfielder said ahead of Minnesota United’s third home game of the 2019 Open Cup. “We want to keep doing things for them so they keep supporting us. That’s the way it works. When everyone’s working for everyone, you got a chance to win something.”

There’s a little extra steel in Alonso’s voice toward the end of the conversation. Asked about the energy of late-stage Open Cup games, he gets serious. “You’re too close to hold anything back now,” said the captain and Open Cup legend, who’s inspiring big crowds and driving toward trophies like he did for a full decade farther west in Seattle. “You have to be hungry to make it happen because no one’s giving it to you. There’s no tomorrow, so don’t leave anything behind.”