Fans of the 106-year-old Lamar Hunt U.S. Open Cup live by its magic moments. And the Quarterfinal Round of the 2019 competition tossed up a fair few of those on Wednesday, July 10. Join usopencup.com for a look back at eight moments of note from the four games in which a pair of underdog dreams were dashed, Orlando City’s fans moved a purple wall for their boys and Minnesota United continued their hedonistic scoring form.

False Dawn for New Mexico
It felt like fate. Or destiny. It seemed written, pre-ordained somehow, when Santi Moar’s strike from the edge of the box put minnows New Mexico United into an early lead over Minnesota United in Saint Paul. In their fifth game on the road, this club – such for only five months – would keep breathing. Keep dreaming. And they’d drag us along with them, making us dream too. Five games – all on the road – and still alive in their first Open Cup. The joy of their traveling fans – yellow and hundreds strong in the corner – was our joy too when that goal hit the net. Their dream was ours. But it only lasted a full three minutes. Morning came. The real dawn. Minnesota – dynamic and mean and for real this year – pulled level. Then they went ahead. In 20 minutes, they were up 4-1. By the end, the scoreboard read 6-1. It was only a dream. Oh, but what a dream.

Minnesota’s Got the Goals
Sometimes goals just come. Hard as they are to find when luck’s out, can’t they just tumble like rain from a stormy night when things are going right? With six against the underdogs from Albuquerque, Minnesota United have 13 now in the space of three games. Darwin Quintero, more wizard than the scientist his given name suggests, has five all to himself. His partner in crime and fellow Colombian, Angelo Rodriguez, has four (including a hat-trick against the New Mexicans). Jan Gregus, Ethan Finlay, Miguel Ibarra and young Mason Toye are all in on the act too. They’ve never failed to score fewer than three in this electrifying 2019 Cup run – a first of any consequence in the club’s history. Careful, though, you soaring Loons – for as easily as they tumble in during the good times, goals dry up too. Against a gritty Portland Timbers in the Semis, you’ll have a stingy wall before you. Gio Savarese’s men just held Carlos Vela and LAFC goalless in Downtown LA – and they look like the kind happy to rain on a parade. 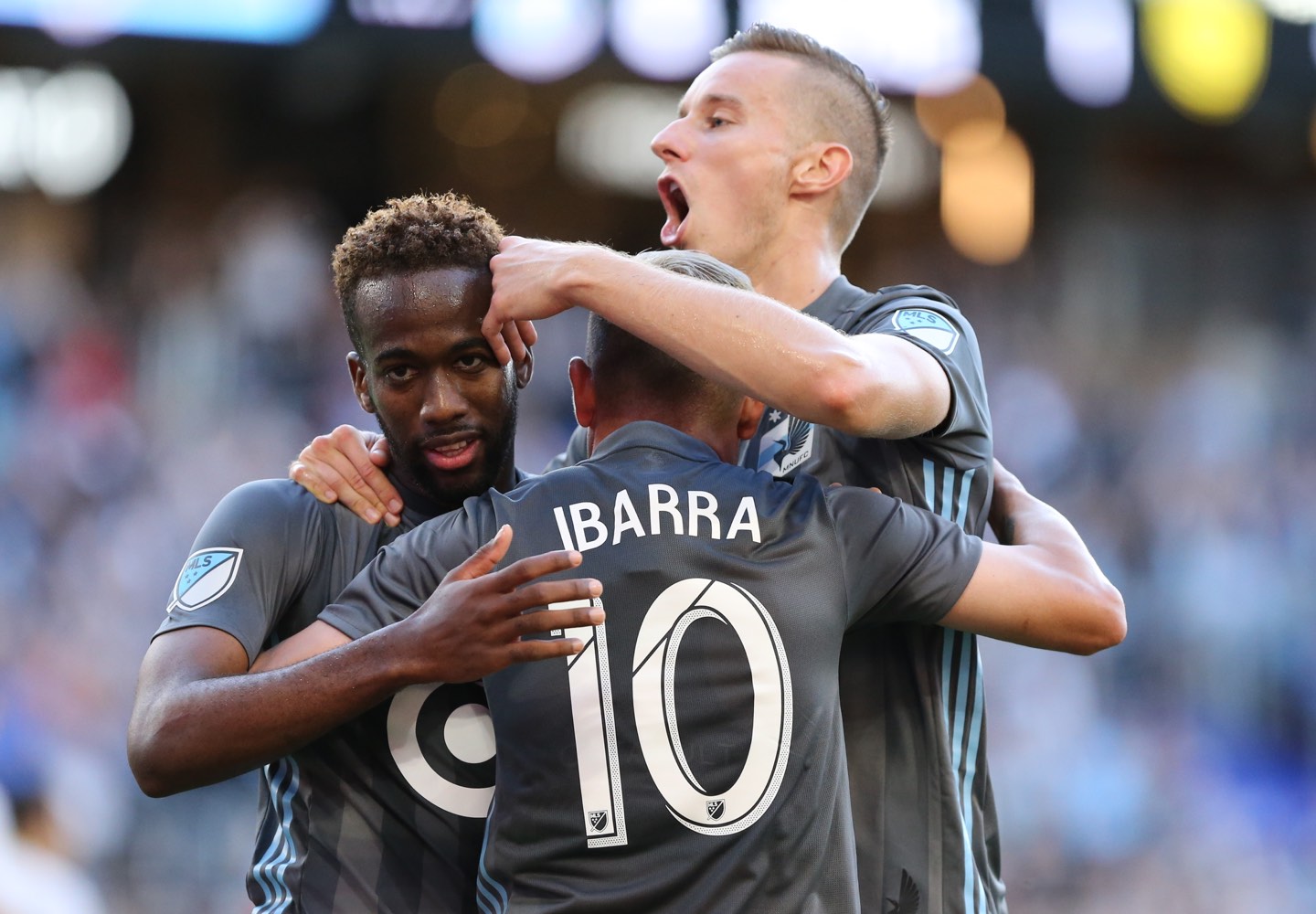 Darwin Quintero has five goals in three games for MNUFC

Black Eye for Bob Bradley
The former U.S. National Team boss twice won the Open Cup in his days with Chicago Fire. He speaks of the old tournament with affection, almost reverence, remembering back into its rough-and-tumble semipro days of the 1980s. He let it be known that his high-flying LAFC would be giving it a right good go this year after falling short in the Semifinals last time out. But his side – loaded with sumptuous talent like Diego Rossi and Vela and little Latif Blessing – were second-best at home against a Timbers team steeped in the rugged spirit of coach Gio Saverese (who played in his college days with NY’s venerable Greek Americans in those old Open Cups devoid of glitz and Hollywood glamour). Gio wasn’t there on the night – he had to fly to Italy last-minute to visit his ailing father – but his sprit was all around the Banc of California Stadium. It was there in the fight and grind of the Portland players. Near the end of a testy affair, a collision on the touchline, sent the ball flying at high velocity out of bounds. It hit Bradley – bald and professorial and planning a late flurry – in his right eye. By the time the final whistle went, it had swollen. This morning one fears it has fully blackened. 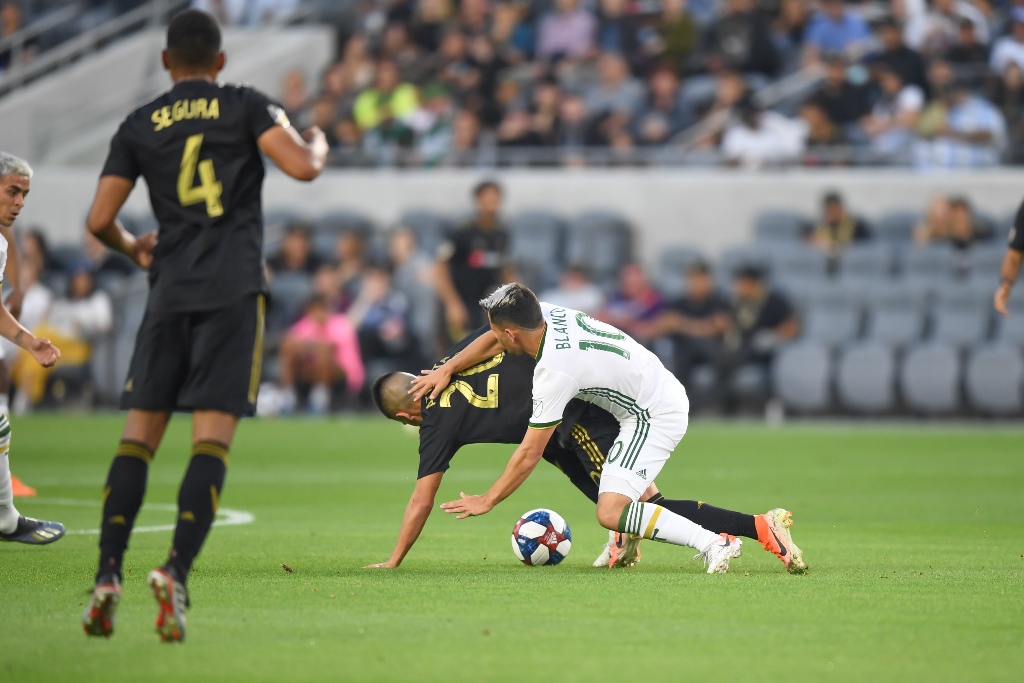 Things got heated (again) between LAFC and Portland Timbers

Ever Seen a Wall Move?
The sides couldn’t be separated in Central Florida. Home team Orlando City and visitors New York City FC were deadlocked at 1-1 after 120 minutes. NYCFC’s captain won the toss and chose to shoot toward the goal with nothing behind it but empty purple seats (and a smattering of traveling New York fans in the corner). It didn’t sit well with the home fans manning the Wall at the other end. A thin stream of them began running through the concourse toward the opposite end of Exploria Stadium. Soon the stream turned into a roaring rush. By the time Orlando’s Adam Grinwis saved NYCFC’s first kick, the seats behind the goal were a wriggling sea of home fans. Security personnel, practical in the face of greater and more determined numbers, threw their hands up and let the seats fill. Grinwis grew bigger than Brad Stuver. He made two saves and was absorbed into the torrent of purple that had materialized, like magic, behind him.

Grinwis for the Win
His smile said it all. Adam Grinwis of Ada, Michigan is a back-up goalkeeper. A No2. He’s made a handful (literally) of MLS appearances and, at 27, he’s not setting records or fending off all-star team invites. But as a former Michigan Buck, he’s got Open Cup in his veins. Tapped by Orlando coach James O’Connor as his Cup keeper for 2019, Grinwis has been heroic. And his smile when he saved the crucial kick from Maxime Chanot was as pure a thing as you’ll ever see on a soccer field. As pure as the joyous scenes behind his goal – and the gratitude shown to the redhead who saved the day. It was as pure as the affection – uncontrolled and uncontrollable – of his teammates, stars like Sacha Kljestan and Dom Dwyer, who rubbed the keeper’s head like a lucky rabbit’s foot. 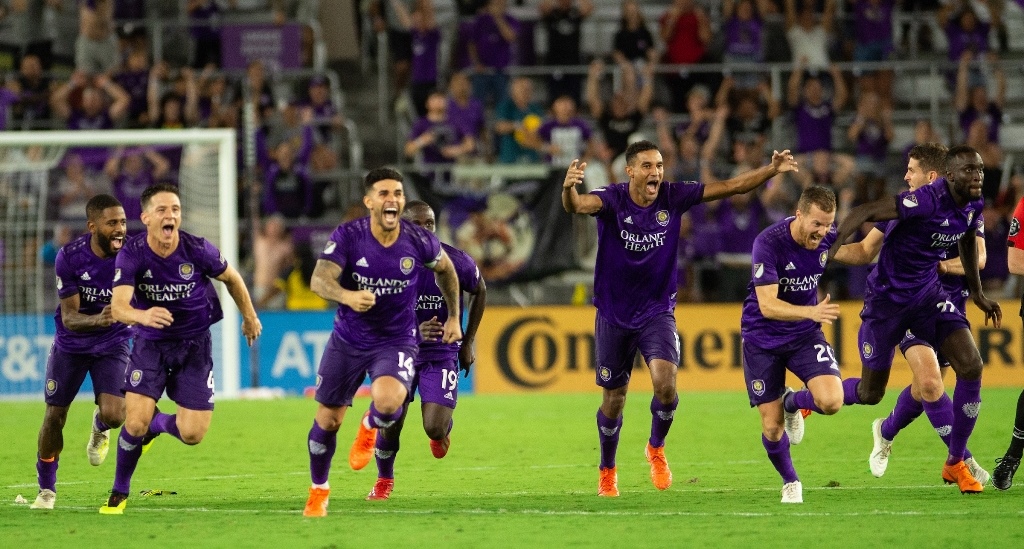 The last Charge of Sam Fink
Saint Louis FC’s captain Sam Fink is a throwback to the old days when the city ruled the Open Cup with a combination of commitment and determination – and just enough skill sprinkled in. The old-fashioned center back led his men through wins over Chicago Fire and scored a dramatic decider in the Round of 16 against FC Cincinnati. But some worried he’d be swallowed whole against 2018 MLS MVP Josef Martinez in the Quarterfinal. They feared he’d be eaten alive and left just a skeleton on the pitch after the Venezuelan sensation finished feasting. But it didn’t go that way. Saint Louis were level at the half. Fink kept Martinez quiet enough and the 2018 MLS champs had fits keeping hold of Fink on set-pieces. He worried them. It was Sam Fink, on his last charge of a charmed 2019 Open Cup, who put the fear again into the favorites. Atlanta United won 2-0 in the end. It was a just score. But Saint Louis and their captain won something too – the respect of MLS’ best. And that of anyone watching.


A New Champion Guaranteed
We knew it going into the Quarterfinal round, but it bears repeating. 2019 will see a new Open Cup winner. A new name will be etched on the base of the Dewar Cup, kept safe and swaddled behind glass in Frisco, Texas at the National Soccer Hall of Fame. The trophy is 106 years old and its base grows like a living tree trunk every year with all the names of those winners going back a century and more. Only one question remains: Whose name will be carved there beside modern Cup giants like the Seattle Sounders or Sporting KC? Or those from the inky past like Stix, Baer & Fuller or Morgan Strasser? The LA Maccabees or the Philly Ukrainians? Orlando City, have you the nerve? How about you Portland? You men from the Rose City seem to have an extra bit of steel about you this year. Atlanta? Will that army of fans push you to a trophy to put right next to the MLS Cup from last year? Or Minnesota, in your fancy new pleasure palace up in Saint Paul, is it to be your day? The fun’s in the finding out. 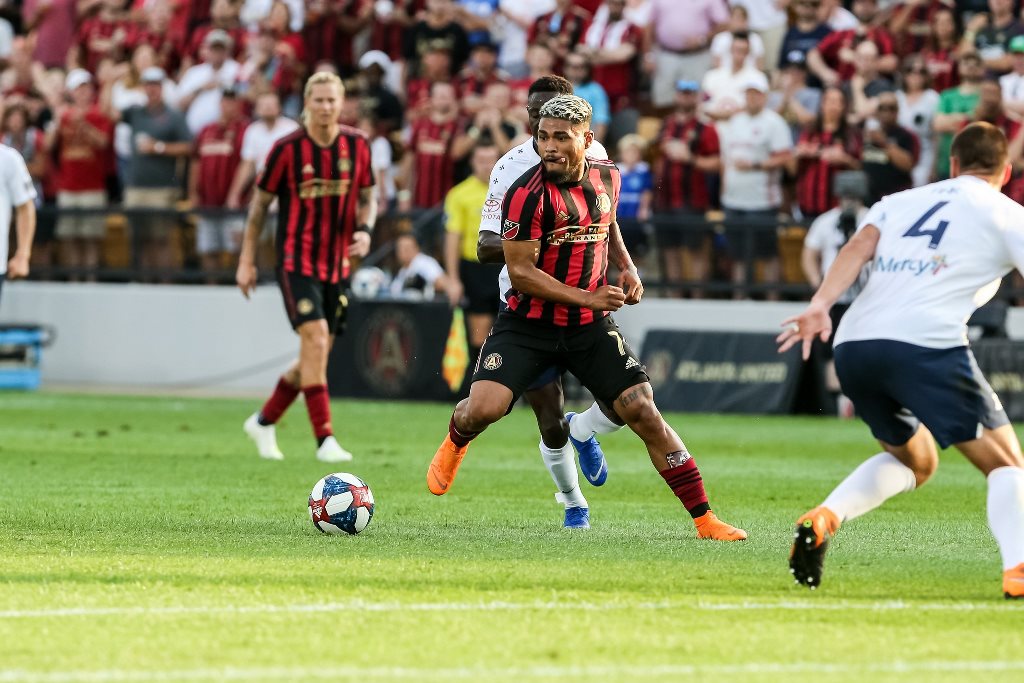 A Fond Farewell
There’s a melancholy to the Quarterfinal stage – so often the last stop for underdogs who’ve captured our hearts. This year is no exception. We’d be wrong not to spare a thought for those clubs that took their leave of us. With every rise, a fall – this is the Open Cup after all. There’s no winner without a loser. No draws here. Nothing to share. So, first we say goodbye to our second-division dreamers. New Mexico United and Saint Louis FC, you’re a part of this now and when they speak of this 2019 edition your ears will ring and your chest can swell with pride. New York City FC, you came up short again. Not since 1991 – and the part-time heroes known as the Brooklyn Italians – has a side from the Big Apple lifted the Cup. Out on that other coast, we thought it might just be your year LAFC. But that’s how the cookie crumbles. Just five games to a title, you hear some of the MLS big-timers say about this old Cup. Has something so close ever been so far?