Atlanta United & the Making of History

On August 27, 2019, Atlanta United lifted the Open Cup for the first time, pairing the long history of American soccer together with the club’s brave, modern face.
Jonah FontelaAugust 29 2019
Open Cup

There was magic to the ceremony. It started in that old familiar way. Captain takes the trophy from a man in a suit. Captain holds the trophy low and builds tension. Trophy goes up. The crowd bellows. Players bounce. Pyrotechnics fire and smoke billows. But on this night, the 27th of August 2019 during the 106th crowning of a U.S. Open Cup champion, the smoke didn’t drift off and up and away into the ether. It hung around the winners in their black and red stripes. It wrapped up the Atlanta United players – champions again but Open Cup champions for a first time – like a cloak. Maybe it was the closed roof on the dome of Mercedes-Benz Stadium. But it all looked like something out of a movie.

“I’ve said it before, but this is a club that wants to win things. We want nights like this,” said goalkeeper Brad Guzan, the can of Bud Light in his polar-bear paw as small as a thimble. There were 35,709 people in the stadium, a record crowd for an Open Cup Final. “This is the kind of feeling that never gets old – playing for these fans and lifting a trophy up in front of them and pushed on by them the whole way. These are the kinds of nights you live for as a player. This is exactly where you want to be.”

The Magic in Georgia

The U.S. international, 34, has won much in his career. Gold Cups, MLS Cups – individual awards and All-Star bids. Still Guzan knows how special what’s happening in Atlanta, Georgia right here and right now. It’s hard to imagine there was no Atlanta United in 2016 and that what’s happened since – the record 70k crowds and the capturing of MLS Cup (2018) and now the Open Cup (2019) – isn’t just a crazy dream.

“My move to this club has been something so special for me,” said winger Justin Meram, who set up the second goal in the 2-1 win over Minnesota United. Born near Detroit, he’s an Iraq international and his last season, at Orlando City, was pretty close to a nightmare. Lack of form and rough treatment from some corners of the fanbase in Florida left him miserable. “Words can’t describe what it’s like to play for these fans week in and week out,” he said, waving an arm across the stadium. “It’s just too big a feeling to put it into words. It doesn’t matter how many are here on the day, they’re going to shout and scream and push us to the end.

“We hung in there. The red card [for Leandro Gonzalez Pirez in the 74th minute] was a tough one for us. But we dug deep and did what we had to do. We find a way to get the job done especially at home in front of these amazing fans,” added Meram, moved by the moment and taking his time to get the words out right. “With the quality these guys have, you’re never really out of a game. They just dig so deep and find a way. We’re never scared of the moment.”

And up she goes | 🏆#USOC2019 @ATLUTD pic.twitter.com/IDNnrHHAAJ

This 2019 Open Cup is Meram’s first trophy as a professional, despite his eight years in the league – first with Columbus Crew where he was beloved for his one-on-one wizardry and keen vision. It’s a long way from Yavapai Junior College in the rodeo country of Prescott, Arizona where he ended up playing by chance after the top college teams weren’t interested in him out of high school. “It’s an incredible feeling,” said the son of Iraqi immigrants fresh from lifting the oldest prize in American soccer. He moved on to wander the pitch, giving and getting the occasional hug, his young family beside him minding his fresh-printed championship t-shirt and baseball cap.

The Wisdom of Larentowicz

Jeff Larentowicz is an old campaigner. A solid citizen. A veteran. Long ago, in 2005, when he started his professional career with the New England Revolution, he was on the league’s minimum salary of $30,000. He’s a graduate of Brown University – a school more likely to send Masters of the Universe and Great Thinkers out into the world than journeymen to MLS’ fields. This 2019 Open Cup is his second (to go along with a pair of MLS tittles). A sturdy defender with a wily old head, he quietly soaked in the night after lifting up the trophy again. “It feels different lifting this trophy now than it did when I was younger because, for one, there’s a lot more people here tonight!” said Larentowicz, holding his daughter’s hand on the pitch and looking out over the post-game scene with wise eyes. At 36, he might not have many days like this left. Hell, it’s likely to be his last. 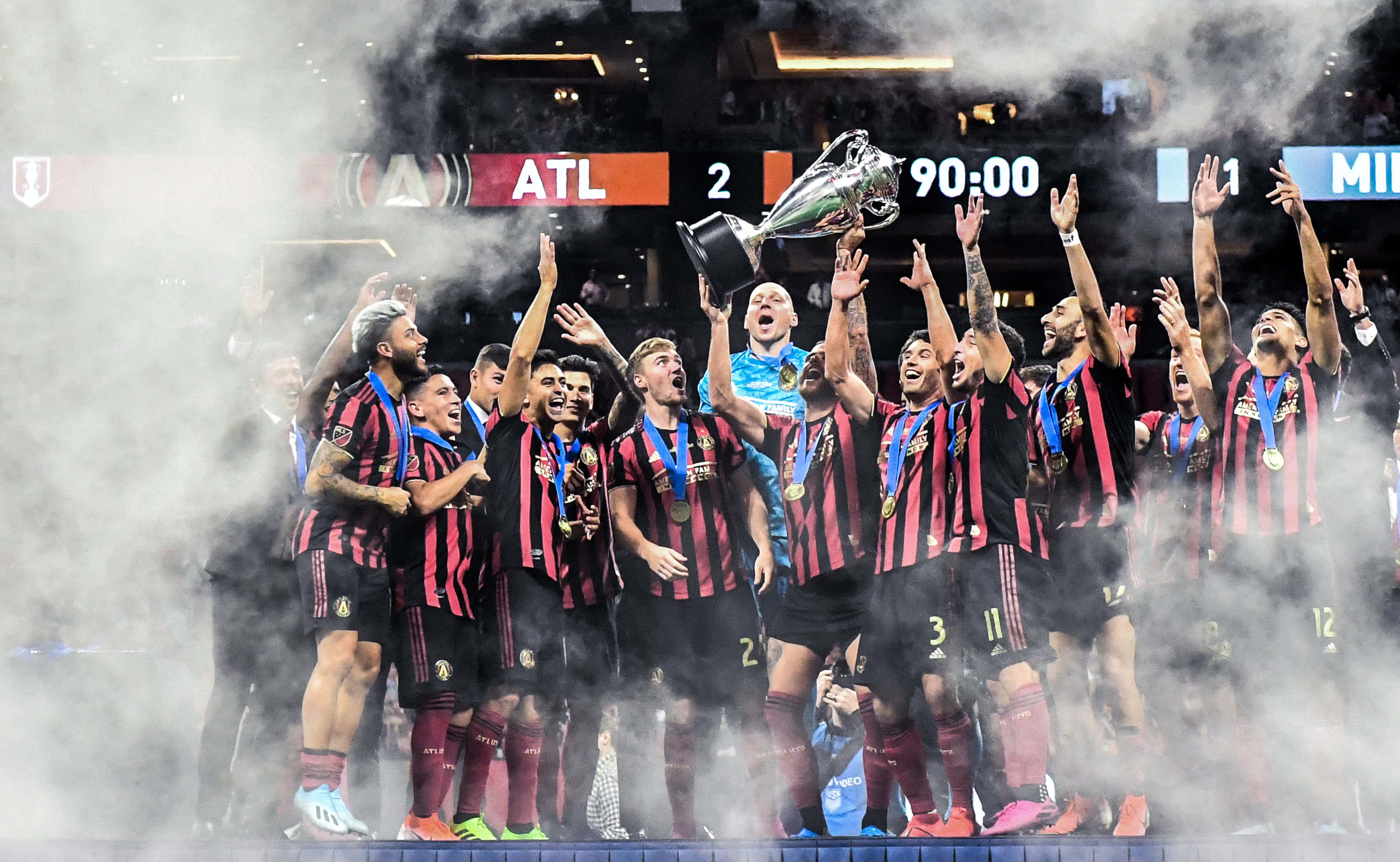 Atlanta United raise the Cup among the smoke

“It feels great. To get a final at home is a nice feeling. But I think we’re a squad. It’s difficult to win the Open Cup, but we did it with everybody, which is really what you need to do,” said the man always looking to pass on praise. “This is just a kind of team that doesn’t rattle. They’re [Minnesota United] a really good team but it’s just tough to come in here and beat us. We proved that tonight. But I’ll admit that they put a lot of pressure on us. We did well to hold up to it.”

Larentowicz isn’t the kind of guy not to note the opponents’ fight on the night – which was formidable. Minnesota United, who were also playing their first Open Cup Final, pushed Atlanta all the way in the second half. But there just wasn’t enough in the tank to overturn an early two-goal deficit.

If you squinted hard enough, you could see into the past out on that pitch where the winners embraced and the losers scowled at their silver medals. There’s Manny Lagos – an MLS champion from 1998 and now Sporting Director with Minnesota United – and Carlos Bocanegra, the Atlanta United Technical Director and Vice President who was twice an MLS Cup winner and stalwart with the U.S. National Team. There’s a continuum to the Open Cup and it goes all the way back, unbroken, to 1914.

A Trophy in Pieces

The Open Cup Trophy had a rough night. It must be said. Shortly after it got to the locker-room, with plastic sheets draping the floor and walls, the trophy somehow ended up in three pieces. But in the spirit of the night, there was only more to share. Michael Parkhurst had the lid, Guzan a supporting rod and Julian Gressel the body – it was now a true cup and in went a sticky mix of champagne and beer. Thankfully, the original Open Cup trophy – the Dewar Cup – is safe behind glass back in the National Soccer Hall of Fame in Frisco, Texas. Soon it will be taken out (carefully with white gloves) and the name Atlanta United FC will be engraved onto its base, alongside the old ghosts like 1914 winner Brooklyn Field Club and Morgan Strasser and Maccabi LA and Bethlehem Steel and the Fall River Marskmen – a full and fair accounting of American soccer history.

It’s always startling how quickly a stadium can go silent. Later that same night, the confetti was swept away and the Open Cup finery pulled off the walls and terraces up in the stands of the Benz. The champagne mixed with suds and spun down the drain, and the players were on their way off home for some rest before the push to the MLS playoffs. But somewhere in those halls and walls will remain the residue, the smoke of that special night when the flashy face of 2019’s American professional soccer – with its domes and tifos and lung-busting crowds – converged with the oldest prize around.