Ebobisse’s Star on the Rise in Rose City

Portland Timbers striker Jeremy Ebobisse is wise beyond his years and taking nothing for granted in a run to the 2019 U.S. Open Cup’s Last Four.
Jonah FontelaAugust 1 2019
Open Cup
It’s still a fresh memory for Jeremy Ebobisse. A split second. A heavy touch. Michael Parkhurst, smelling blood, pounced to strip the ball. Soon Josef Martinez was one-on-one, around the Timbers keeper and the ball was in the net. All the young Portland striker could do was watch on, in agonizing slow motion, and rue his error while the crowd of 73,000 shook Atlanta United’s Mercedes-Benz Stadium to its foundations.

“It was an unfortunate event – my turnover led to a goal,” said the 22-year-old about the first goal in a 2-0 loss to Atlanta United in last year’s MLS Cup decider. “I didn’t really absorb the size of the crowd up until they scored and in that moment I really felt the size of it – by far the biggest crowd I’ve ever played in front of. I felt out of the game. I was just absorbing all the jubilation of the fans. It wasn’t a great time to be feeling that, but I had to acknowledge that we had a real showcase on our hands.”


From the Bench to MLS Cup

Ebobisse first broke into Gio Savarese’s starting XI in the run-up to last year’s playoffs. He proved a crucial piece of the puzzle that ended with Portland playing in that one-off MLS Cup Final last December in Georgia. “I kind of got lost in the moment of it because I was just so surprised to be a part of the starting XI,” said Ebobisse, as whip-smart off the field as he is sharp in opposition penalty areas. “You have to believe in yourself to be a player at this level, but I was getting thrown in when we were still jostling for a playoff spot and it was a little surreal looking back on it and considering how the year had started [Ebobisse played just eight minutes of Portland’s first 26 games of 2018]. I’ll admit, I let some of those moments get to me – it was just a lack of experience. But I feel bigger for having gone through that trial by fire. I feel more ready now.” 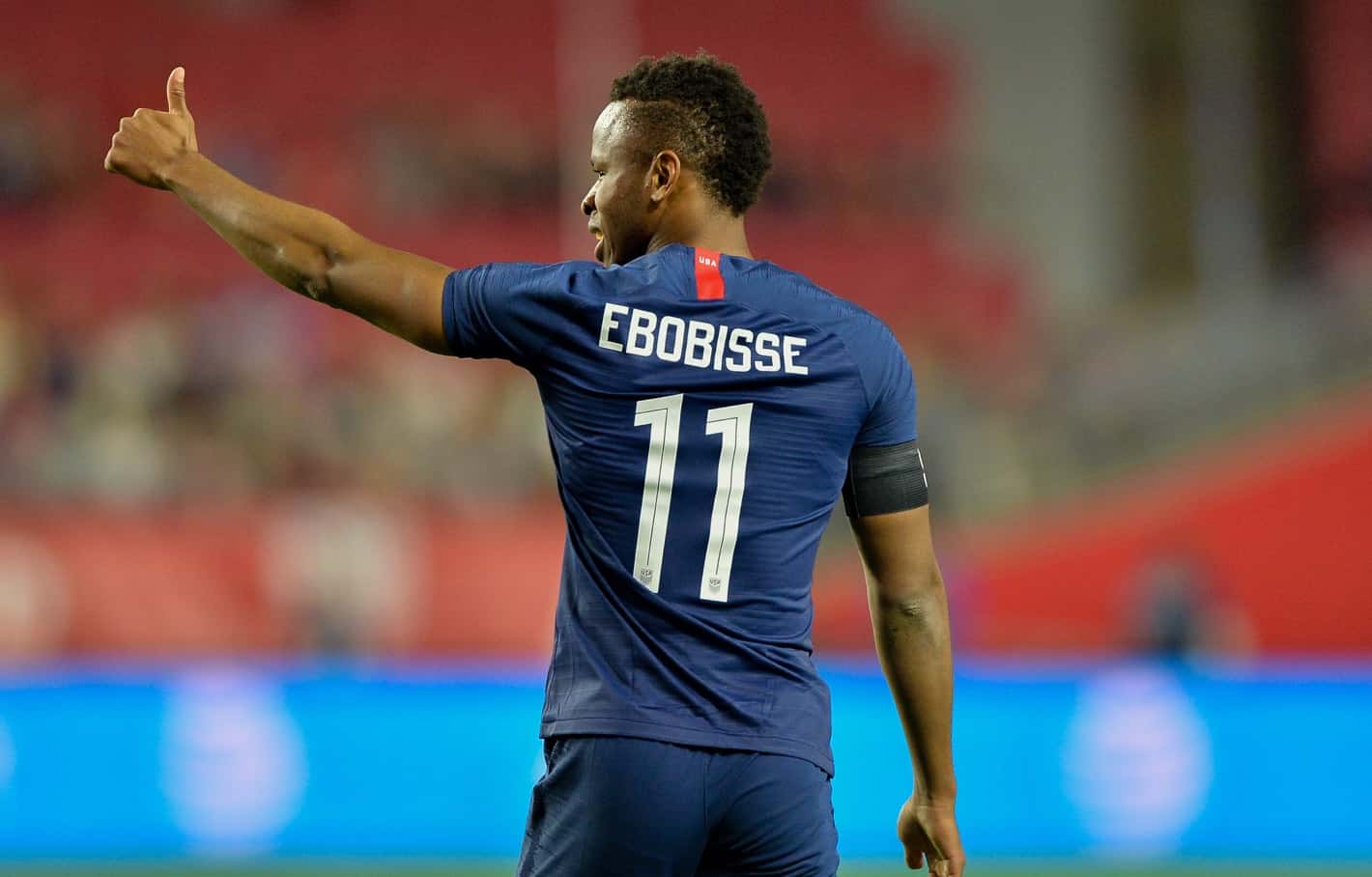 Ebobisse in his first cap for the U.S. Senior Team against Panama

In this year’s Lamar Hunt U.S. Open Cup, Ebobisse has been outstanding. He’s building on the strides he made last year, and learning from the hard moments. It was a rough opening to the season for the Timbers, who had to play their first 14 games on the road because their Providence Park was being upgraded. “It was a solid two and a half months on the road and you just can’t see the end of the tunnel. Pressure builds when that first win doesn’t come,” said Ebobisse looking back on his team’s six-game winless streak to start the year. “Each game starts to feel more important than it is. Relationships among teammates get tested. Things get tense and exaggerated. Over the course of a season every team will go through things like that, but we got it all at once and very early.”

On to the Semifinals for @TimbersFC‼️

With a victory vs. @LAFC, @TimbersFC is set to take on @MNUFC in the next round!👊#USOC2019 | 📺 Highlights pic.twitter.com/GgFKJyqs9H

A first 2019 Open Cup win against Northwest archrivals Seattle Sounders (2-1) coincided with Portland’s return home and a return to form. “We starting putting teams to the sword in June – and getting positive results in July,” added the striker, who lined up in the next Open Cup win – a 4-0 Quarterfinal rout of LA Galaxy – and has developed a keen understanding with veteran teammates like Diegos Valeri and Chara and Brian Fernandez in the frontline. “We need to believe in ourselves if we’re going to win it all.”

LAFC to the Sword

While climbing the MLS’s Western Conference table from dead last to their current perch of seventh, the Timbers’ best showing in the Cup came in the last round. It was a classic team performance against a much-fancied LAFC side that embodied the “unity of spirit” and “grit” that Ebobisse points to as the Timbers’ defining characteristic. “We executed our game plan perfectly,” said Ebobisse, who scored an 84th-minute winner in the 1-0 victory. It was his 8th goal of 2019 in all competitions. “We capitalized on the break and we also kept the ball and frustrated LAFC by keeping the score at zero-zero. When the home team are favorites, the longer it stays at zeros the antsier they get. People didn’t think we’d win that game, but we’ve gone to a lot of tough places in the last two years and come away with wins.” 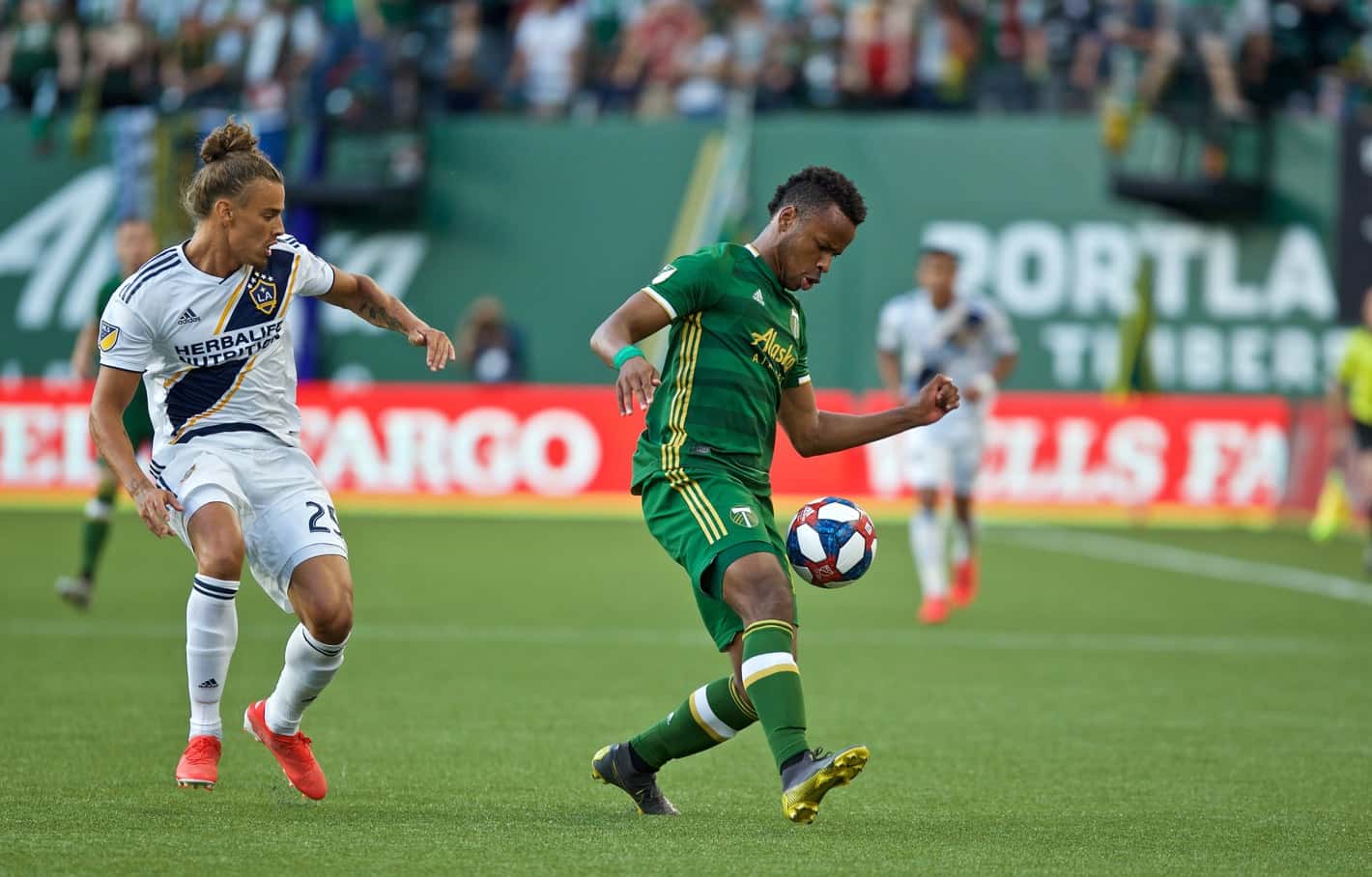 Ebobisse in action with the Timbers – photo Craig Mitchell

Ebobisse likes to talk and he has a lot to say. Those two things aren’t always a package deal. Born in Paris, France, where his Cameroonian father and his Malagasay mother attended engineering school, he came to the States at the age of two when his father’s job with the World Bank landed him in D.C.. He excelled on the soccer field early but also in the classroom at Walter Johnson High School in Bethesda – consistently among the top secondary schools in the nation. When it came time for college, he could have written his own ticket. He chose to spend a year and a half (two seasons) at Duke because: “The administration and the coaches knew I wanted to go pro as soon as I could,” said the striker, who earned his first cap with the senior U.S. Men’s National Team in January, a start against Panama. “They were open to me being able to come back at a later date and finish my degree – and that was important to me.”

Portland boss Savarese is no coddler and it wasn’t Ebobisse’s silver tongue or high IQ that got him into the Timbers’ starting XI. “Gio’s a passionate guy,” said Ebobisse, about the coach known for fostering an intense sense of competition in his teams. “He infuses a lot of energy into every game – but it’s controlled and guided energy.” Savarese’s appreciation for his young striker’s work ethic is well known: “He always wants to improve and be more influential in the team,” said the coach. “He had that work ethic from the beginning, even in the moments that were difficult.” 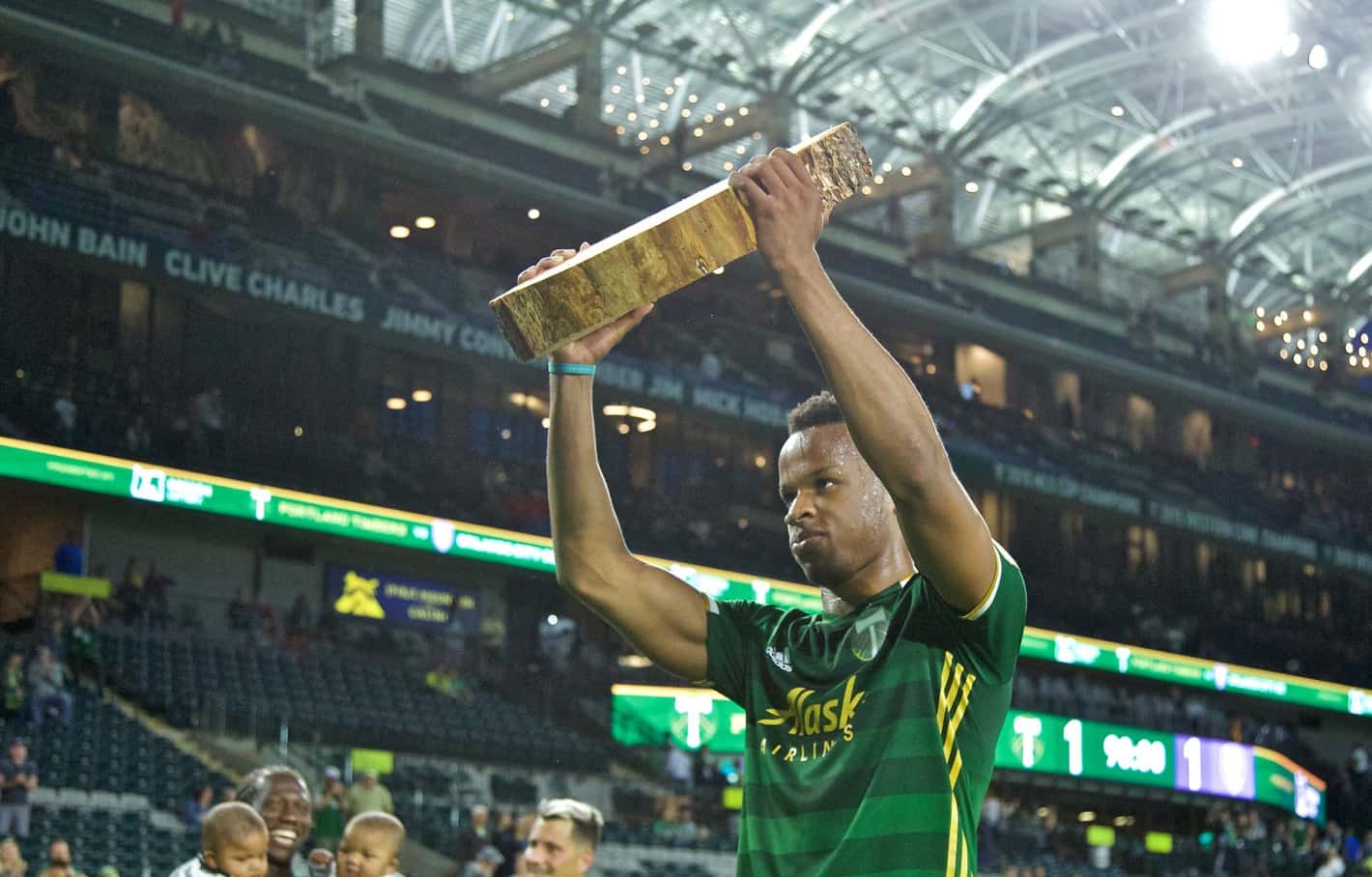 Minnesota in the Way

Up next in the Open Cup for Savarese, Ebobisse and the Timbers is a Semifinal date on the road with Minnesota United, who have been on fire in the 2019 edition of the 106-year-old tournament with 13 goals in the space of just three games (five of them from the outstanding Darwin Quintero). “People take a lot of shots at Minnesota United,” said Ebobisse, who will be up against two former teammates from his D.C.-area youth club Olney Rangers in MNUFC’s Chase Gasper and Carter Manley. “People are always questioning whether they [Minnesota United] have a winning mentality. They’ve responded in a big way this year and you take them for granted at your own risk. It will be a challenge, but we’ll look at the film and have the right amount of respect. Not too much respect – but we won’t be caught off guard.”
He’s not looking past Minnesota United. That much is clear. But there’s something on the horizon. A second chance perhaps? A win for the Timbers in Minnesota and a win for Atlanta United in their Semifinal in Orlando would set a rematch of last year’s MLS Cup Final – and it would be played once again at a likely-packed Mercedes-Benz Stadium. It’s not lost on the young Ebobisse who’s constantly trying to improve through adversity and take absolutely nothing for granted on or off the field. 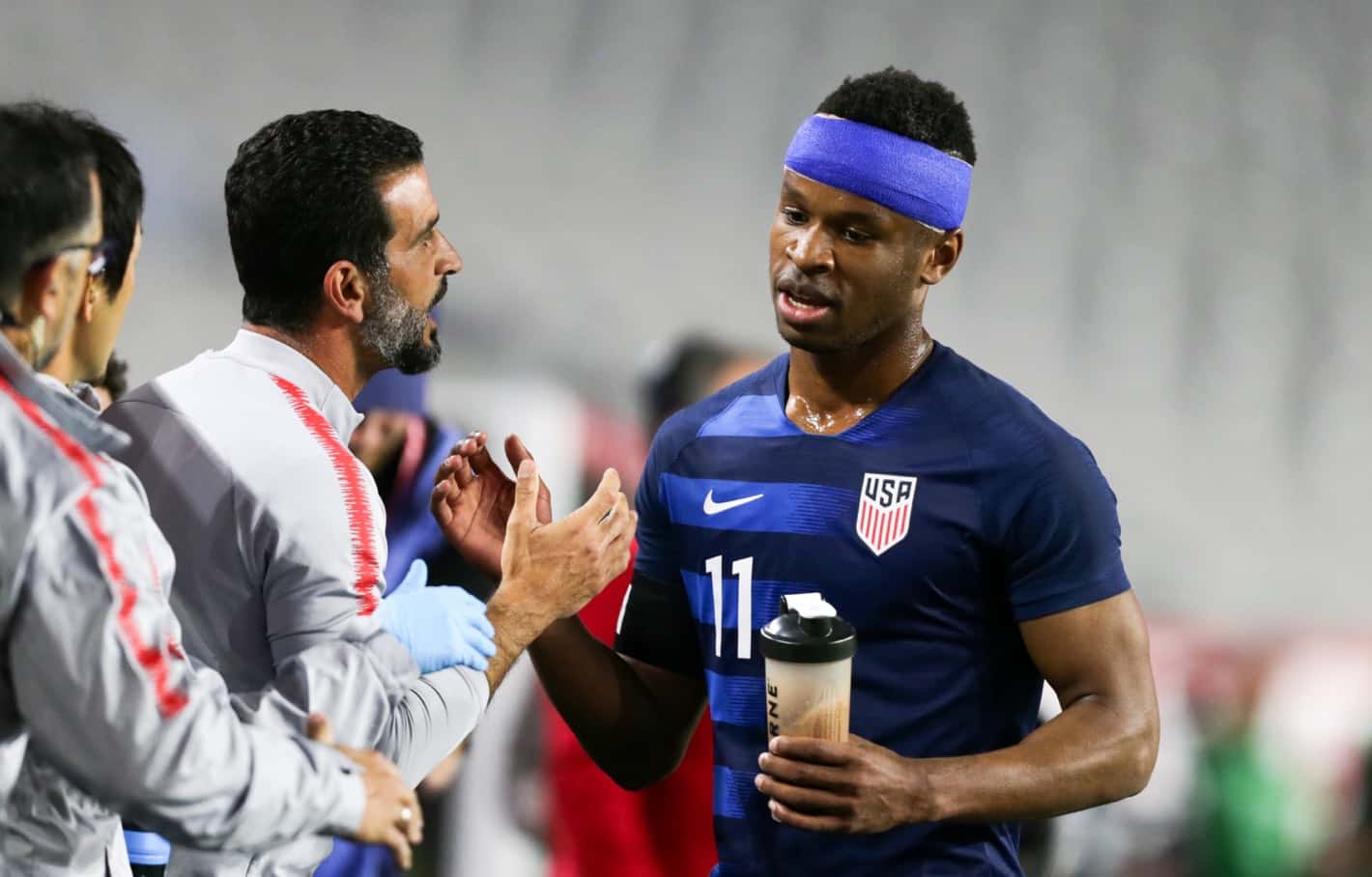 Ebobisse in action for the U.S.
“The idea of that – of facing Atlanta United in consecutive Finals in such a short time is something that, if we can make it happen, would be special,” said the striker, sensing, with the right kind of wind, a shot at redemption. “I know I want to rewrite the story in whatever way I can. I didn’t represent myself in the way I felt I could have last year. I put a lot of pressure on myself and if we were to get there again, and that Final happened again in the Open Cup, I’d want to take care of that side-story of making amends.”
Tags
Open Cup
2019 US Open Cup