He may not always grab the headlines, but veteran Jeff Larentowicz has won MLS and Open Cups – and now he’s eager to hold them both at the same time with Atlanta United.
Frank Dell’ApaAugust 27 2019
Open Cup

Jeff Larentowicz could not have imagined the level of Atlanta United’s support when the club joined MLS in 2017. But after two-plus seasons of sellouts and success, the veteran midfielder knows what to expect when the Five Stripes meet Minnesota United in the Lamar Hunt U.S. Open Cup Final at Mercedes-Benz Stadium on Tuesday (7:45 p.m. ET; ESPN+).

“People in Atlanta are hungry for this club,” Larentowicz said this week. “If we’re playing for a trophy, they’re going to come out.”

Larentowicz, 36, has experienced the highs and lows of the game, lining up for five teams from the East Coast to the West, and points in between since starting his career in 2005. He’s won titles with three teams: New England Revolution (2007 U.S. Open Cup and ’08 North American SuperLiga, along with Atlanta teammate Michael Parkhurst), Colorado Rapids (2010 MLS Cup), and Atlanta (last year’s MLS Cup). 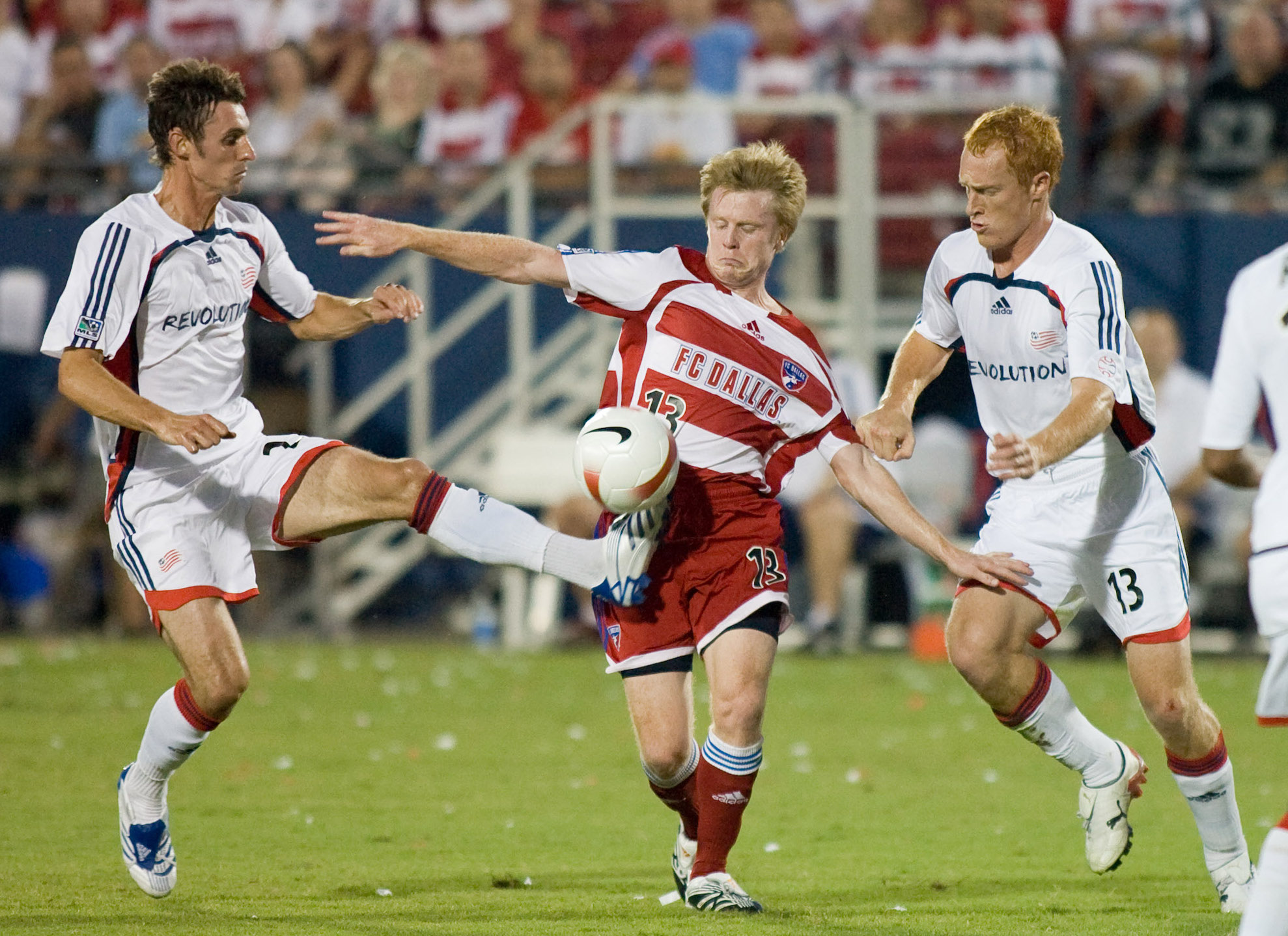 Larentowicz (right) for the Revs in the 2007 Open Cup Final.

Nothing could have prepared Larentowicz for Atlanta.

“It is a phenomenon,” Larentowicz told usopencup.com. “People ask me, ‘what is it? Why do you do so well down there?’ It was a perfect storm, so many different elements. It was a new team, a new franchise. But the [Terminus] Legion had been around and when it was announced, they had been watching it and this was their opportunity to be a part of it. Management brought in good players, they marketed it, there was a hunger for it bubbling below the surface. Everyone believes in the owner. Then you win a few games and everyone starts asking, ‘Have you been to a United game?’”

Capturing the ATL’s Imagination
“People are so engaged – they know the players, they know tactics, they know the opposition,” Larentowicz went on, describing the Atlanta United cultural phenomenon in detail. They are fully engaged and that’s what’s so exciting about it. You want to play for them.”

By now, a significant part of the Atlanta population has witnessed United matches – attendance surpassed 1 million last year, climaxing with a crowd of 73,019 for last year’s MLS Cup final.

But the Open Cup, despite being 106 years old, is relatively new to the area. Most of United’s Cup games are contested at Kennesaw State University. The only Open Cup game played at Mercedes-Benz Stadium attracted a crowd of 41,012 for a Round of 16 match last year – and that still stands as the highest-ever attendance for the tournament.

“The Open Cup, it’s difficult for teams to fully commit to it, that’s been the history of the tournament in the league,” Larentowicz admitted. “That we’re in the Final shows the commitment and the strength of our team. The players realize the goal of the club is to win trophies. From day one, the coaches said it and the players bought into it.

“We obviously started pretty poorly this year. A lot of focus was on [Concacaf] Champions League at the beginning and that didn’t come together,” Larentowicz said.  “The transition back into the league was tougher for us. It took us a while to come together and find our footing under a new staff [new coach Frank de Boer replaced the popular Tata Martino at the start of the season when he left to coach Mexico’s national team], but we’re all comfortable now.”

A 3-2 win over Club America in the inaugural Campeones Cup before a crowd of 40,128 provided a warm-up for the Open Cup Final. Larentowicz captained the team and converted the second goal with a worldie from outside the penalty area against the Aguilas of Mexico City.

Set-Piece Specialist
Though Larentowicz has mostly been expected to be a ball-winner and distributor, he also provides a threat from distance in the run of play and off set pieces – he is tied with Javi Morales for second behind Sebastian Giovinco on the MLS career list with nine goals from free kicks.

“Growing up, I had always been an attacking player,” Larentowicz said. “Nothing beats scoring goals. I’ve practiced for a long time, taking a lot of free kicks, shots from outside the box. You get the opportunity and you go for it. If you can be a threat and consistent with your shooting, if you’re a danger from one place on the field, it opens up other spaces. You can be a threat even if you don’t do it often. That’s exactly it. If someone shows they’re able to shoot from range and distance, it creates space.”

Despite ranking sixth in all-time MLS minutes (fourth among field players), Larentowicz has kept a relatively low profile during a 15-year career. He’s respected for his command of the midfield and it is no coincidence he has performed for some of the league’s most successful coaches – Bruce Arena, Tata Martino, Steve Nicol, Oscar Pareja, Gary Smith and Frank Yallop. 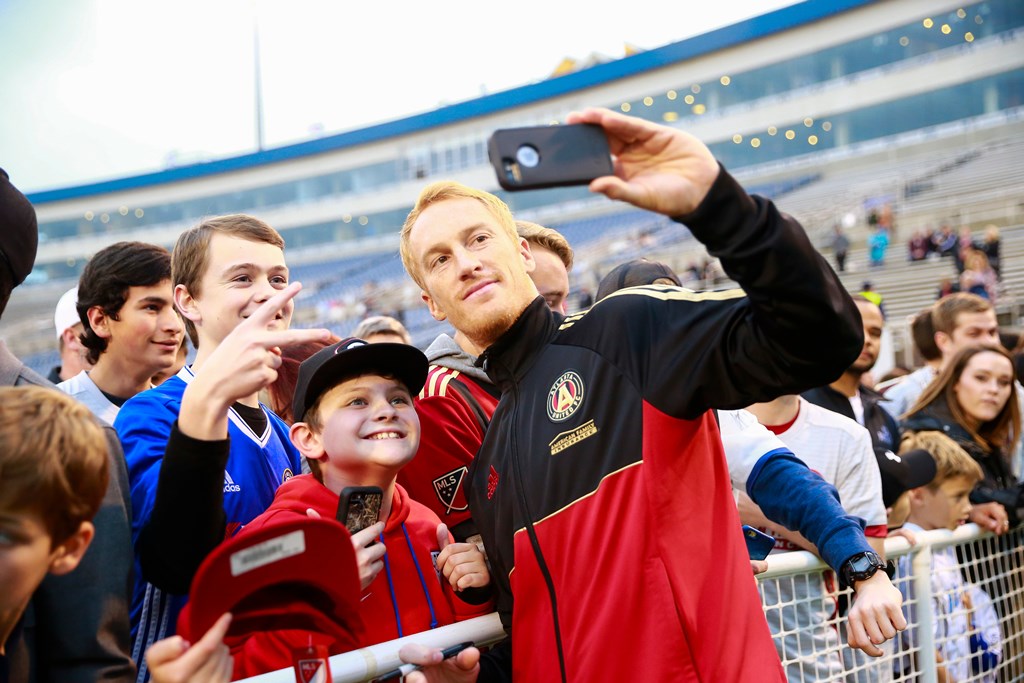 Larentowicz has come a long way from his low-pay early days.

But Larentowicz had to overcome long odds to succeed, going from Brown University to the Revolution, who selected him in the fourth round of the 2005 MLS Supplemental Draft.

Larentowicz signed a developmental contract and played one minute as a 90th-minute substitute in his first season. Early in the 2006 season, he worked his way into the starting lineup, earning a contract at the then full-time minimum salary ($30,000).

He developed his game pairing with two of the league’s most accomplished central midfielders – Shalrie Joseph (Revolution) and Pablo Mastroeni (Rapids) – and is now combining with Darlington Nagbe and Eric Remedi the same way.

Low Pay – Big Payoff
When the Revolution captured the ’07 Open Cup, they were victorious without Joseph, serving a suspension after being red-carded in a 2-1 extra time victory over the second-tier Carolina RailHawks in the Semifinals. At the time, Larentowicz and Andy Dorman were among the lowest-paid starters in the league, but they drove the Revolution midfield in a 3-2 win over FC Dallas in the final at then Pizza Hut Park.

“That was important for the Revs,” Larentowicz recalled. “They had lost some MLS Cup finals, we lost a couple while I was there. And to be in another final, somewhat ironically in Dallas [site of the 2005 and ’06 MLS Cup finals], we exorcised some demons. The Revs had had opportunities to win but hadn’t up until that point. I remember it was a Wednesday night in Dallas in late summer, it was hot and we won the game with sort of a mixed lineup. It was important for the club to win a trophy and for the players to bring it home.” 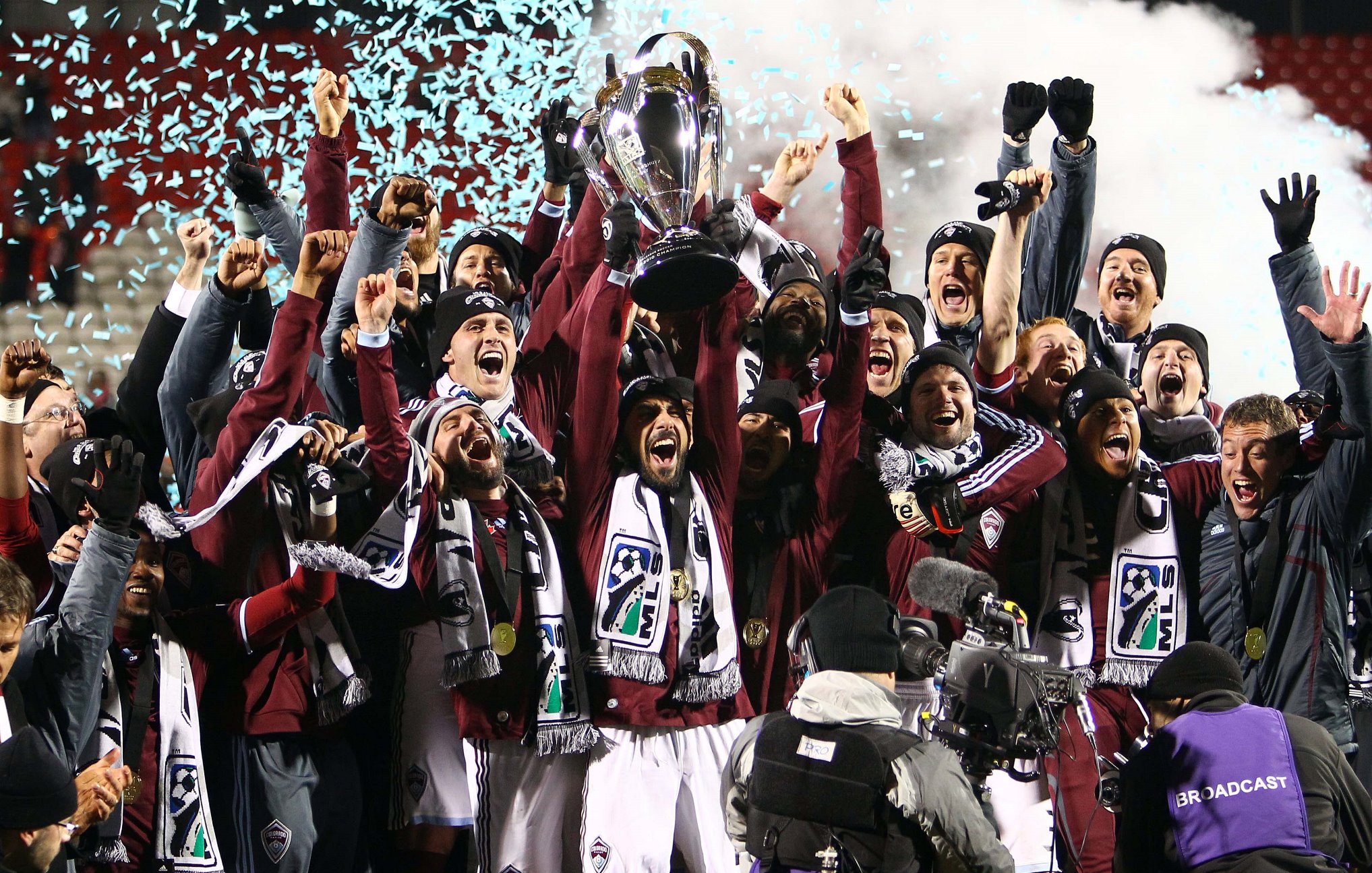 Larentowicz (right, middle) celebrates MLS Cup with the Rapids in 2010.

By 2009, Larentowicz had played five seasons at minimum salary and below. Despite not having leverage (this was before MLS free agency), Larentowicz refused the Revolution’s contract offer, and he was traded to the Rapids, earning a raise to $150,000 annually. Six years later, Larentowicz would become part of the league’s first group of free agents.

“Leaving New England wasn’t easy,” Larentowicz admitted. “I played there five years and we had been through a lot. I was going to Colorado and I had friends who played there and they were saying, ‘Dude, I don’t know, it’s going to be tough.’ But it was a fresh perspective, new players, and we complemented each other. I went from playing with Shalrie [Joseph], maybe the top, all-time best player in MLS, to Pablo [Mastroeni], so that was great for me. We pulled it together. We didn’t have any [Designated Players], we were just a standard MLS group. We fought for each other and worked hard and that went a long way in the league at that time. We were lucky some teams got bounced out and we won – we beat San Jose in the final of the Eastern Conference. In the final, David Ferreira was MVP and he scored the first goal, but we bounced back.”

On the Edge of History
Larentowicz did not win another title until coming to Atlanta, but now is on the verge of holding the MLS Cup and Open Cup titles simultaneously. 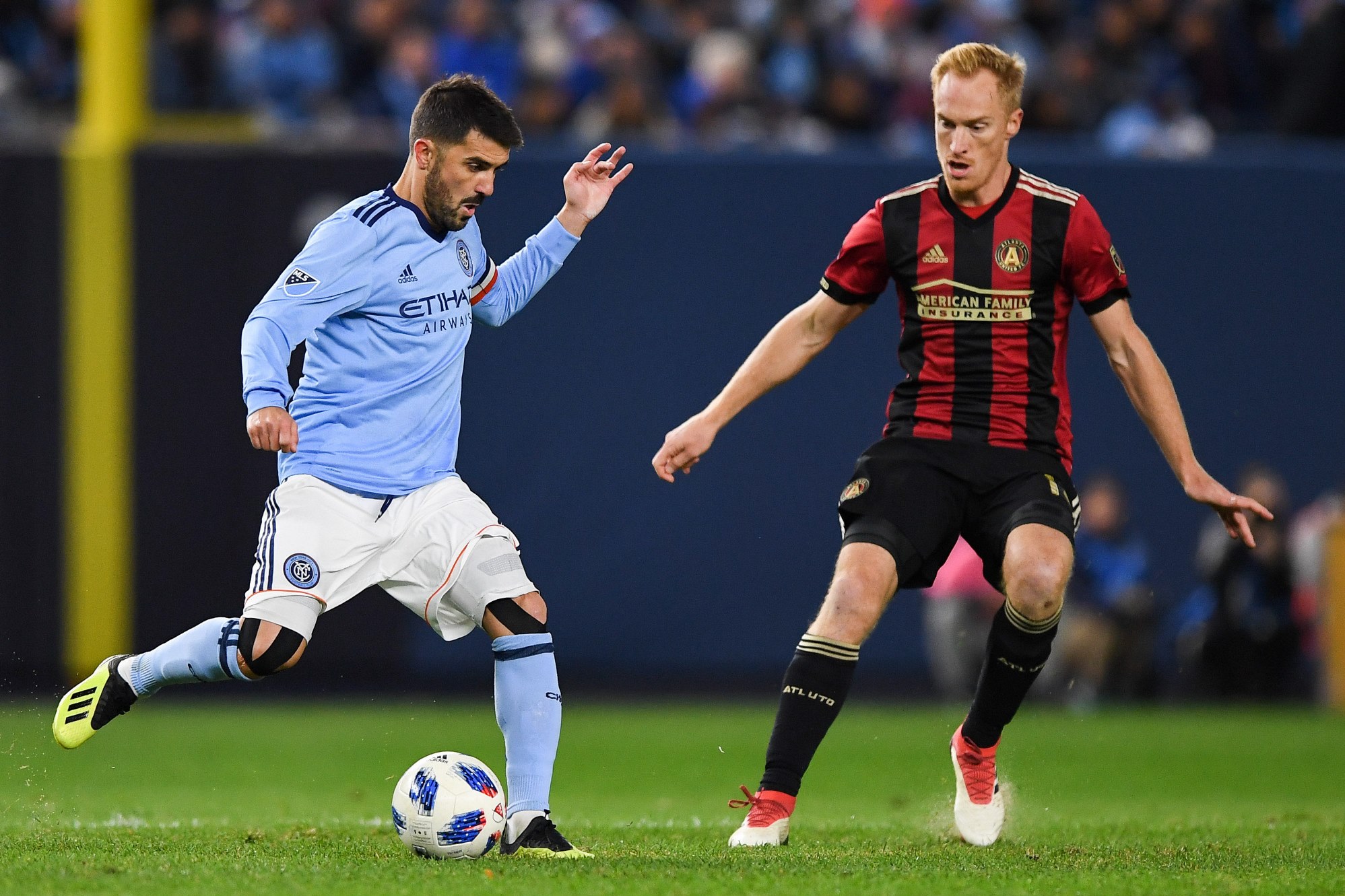 “With all the players from overseas, I was coming in thinking this is going to be hard and we’ll have to be patient,” Larentowicz said of Atlanta’s first season. “But the coaches said we need to win every game, whether on the road or at home. We got bounced out of the playoffs our first year, and it was unexpected, but it gave us a taste of American playoffs – you can be out before know it.

“Our second year, we learned from our mistakes and went out and dominated and got some amazing performances from players, and a coach that put it all together. From day one of 2018, Tata Martino’s goal was to make us a very versatile team, tactically. We played a couple formations with tactical goals in them, so when we went out on the field and teams prepared for us, we switched it up and kept them off balance. I’ve never been on a team that did it so well. It was hard to scout us.”

In the 2018 MLS Cup final, United took a 2-0 win over the Portland Timbers, Larentowicz joining Parkhurst, who set up the opening goal, on a three-man back line.

Larentowicz might be Atlanta’s oldest player, but he retains his youthful enthusiasm.

“I play because I enjoy it,” Larentowicz said, on the verge of another Cup. “Making $10,000 my first year shows you’re doing it for the enjoyment. And, now, it still shows I’m enjoying it. I still want to win and help the team and Tuesday will be our chance.”