The Great Eight Tournament Wrap: A First Crown for Atlanta in a Cup for the Ages

The 2019 Open Cup had something for everyone – from underdogs to a dominant Atlanta United lifting the trophy for a first time.
Jonah FontelaAugust 28 2019
Open Cup

Fans of the 106-year-old Lamar Hunt U.S. Open Cup live by its magic moments. And the whole of the 2019 competition tossed up a good few of those between May and late August. Join usopencup.com for a look back at eight moments of note from the First Round to the Grand Final at the Mercedes-Benz Stadium, where reigning MLS holders Atlanta United were crowned champions for the first time in front of a record crowd. There were underdogs and heartbreak, Soldiers and dreamers too. It’s the Open Cup after all, so really, we had it all.

Atlanta United are gluttons for trophies. Now they’ll have to find room in their bulging cabinet for the oldest prize in American soccer (their first time winning the Open Cup) to go beside their 2018 MLS Cup and their recently won Campeones Cup. The 5-Stripes were worthy winners on the final night of competition, edging Minnesota United 2-1 despite going down a man in the second-half of a game that broke the record for largest attendance at an Open Cup Final (35,709). Among the champagne and beer in the home locker-room after the game at the Mercedes Benz Stadium, it’s no secret that the winning team broke the Cup into three separate parts. Ah well, these things do happen and it ain’t a party ‘til something gets broken… 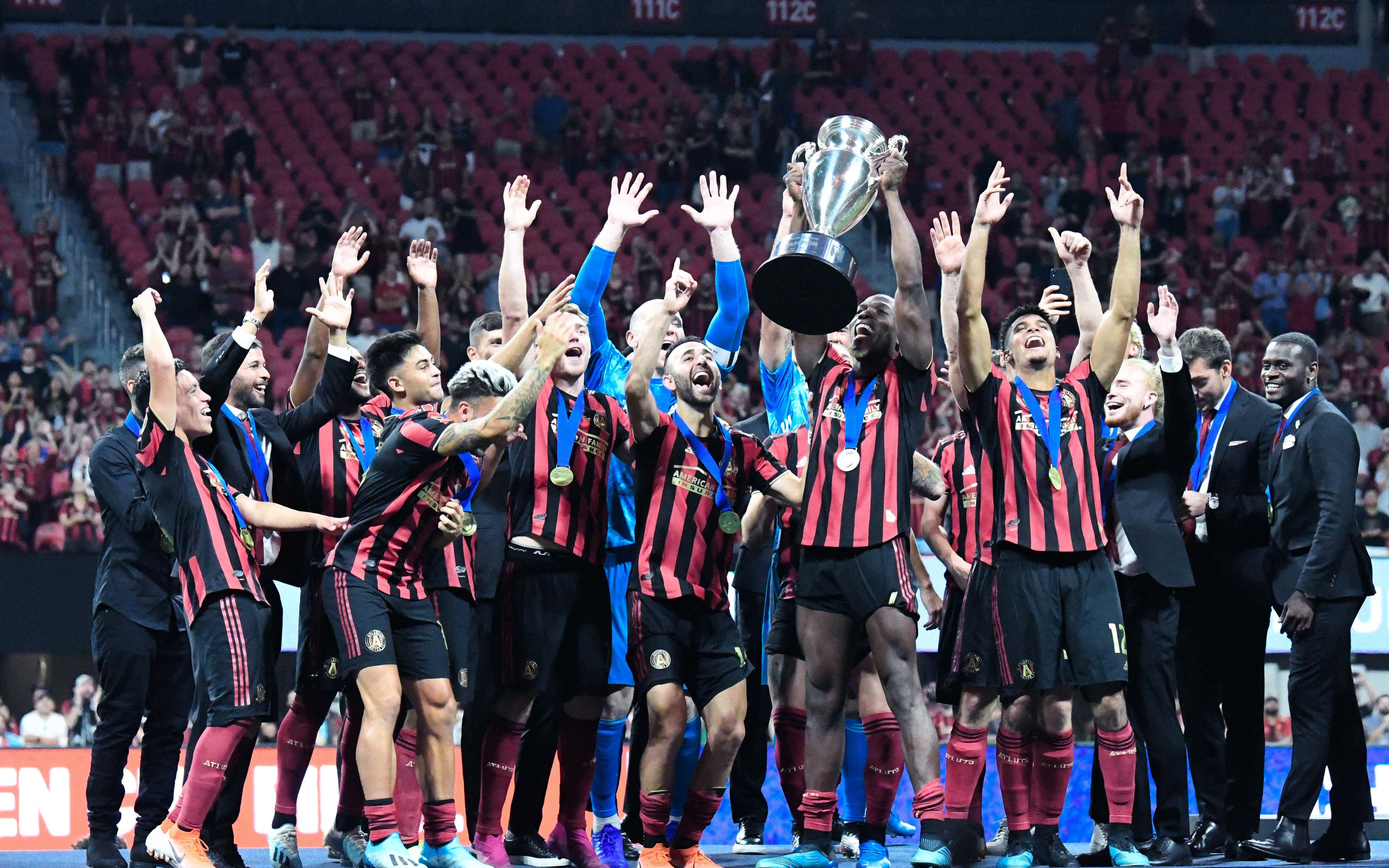 Up goes the Cup – in Atlanta, Georgia

Minnesota’s Got the Goals

Sometimes goals just come. Hard as they are to find when luck’s out, can’t they just tumble like rain from a stormy night when things are going right? With one in the 2-1 loss in the Final against Atlanta, Minnesota United finish with 16 in the space of just five games. Darwin Quintero, more wizard than the scientist his given name suggests, had six all to himself to finish with the Golden Boot. His partner in crime and fellow Colombian, Angelo Rodriguez, had five (including a hat-trick against New Mexico United in the Quarterfinal). Jan Gregus, Ethan Finlay, Miguel Ibarra, Robin Lod and young Mason Toye all got in on the act too. The Loons never failed to score fewer than three on any day in this electrifying 2019 Cup run – until the ill-fated Final that is.

We think of Open Cup legends in black and white – stained sepia-toned photos of Billy Gonsalves found in dank cellars in Fall River, Mass. We think of the heroes of the old Bethlehem Steel and Morgan Strasser. Our minds turn to the Ukrainians in Philadelphia in the 1960s or the Maccabees of the early 1980s, their socks bunched around their ankles like tired animals. Sometimes it’s hard to see the heroes in your midst – among you in the right here and now. Ozzie Alonso is one. The Minnesota United holding midfielder who seems to be everywhere on the pitch – even at the ripe age of 33 – played in his seventh Open Cup Final on Tuesday. He was the heart and soul of a Seattle Sounders team that won the Cup four times in the decade he was there. “This tournament means a lot to me,” said the man who defected from his native Cuba to chase a soccer dream in America and holds a Modern-Era record for appearances in the Open Cup Final. “From when I was just here and no one knew me at all and I didn’t know what would happen, the Open Cup was part of me.”

What of a Wall?

It’s a partition, right? A barrier? Something in the way. We often hear appeals to tear down walls, to build bridges instead. But the Timbers’ North End at Providence Park and Orlando City’s Wall, Minnesota’s Wonderwall and Atlanta United’s North Side are bridges. Built as steep as building codes allow and set in behind one goal, they’re a home where capos – cheerleaders facing away from the game – urge noise and enthusiasm. They stir the soup until it boils. The fans stand on those Walls – all as one and lost in the same goal. Flags fly and songs are sung. Those Walls make the home goalkeeper grow a little bigger when he’s at their end. And the visiting one shrinks just a little bit. No one on those Walls is sitting on the fence. And sure, they’re noisy and beery. They can get rough and the chatter isn’t always fit for Sunday School, but these Walls are more than just a smattering of seats each one exchanged for a certain number of dollars. They’re wide-open spaces – filled only with potential – and oh how we saw them come to life in this 2019 U.S. Open Cup. 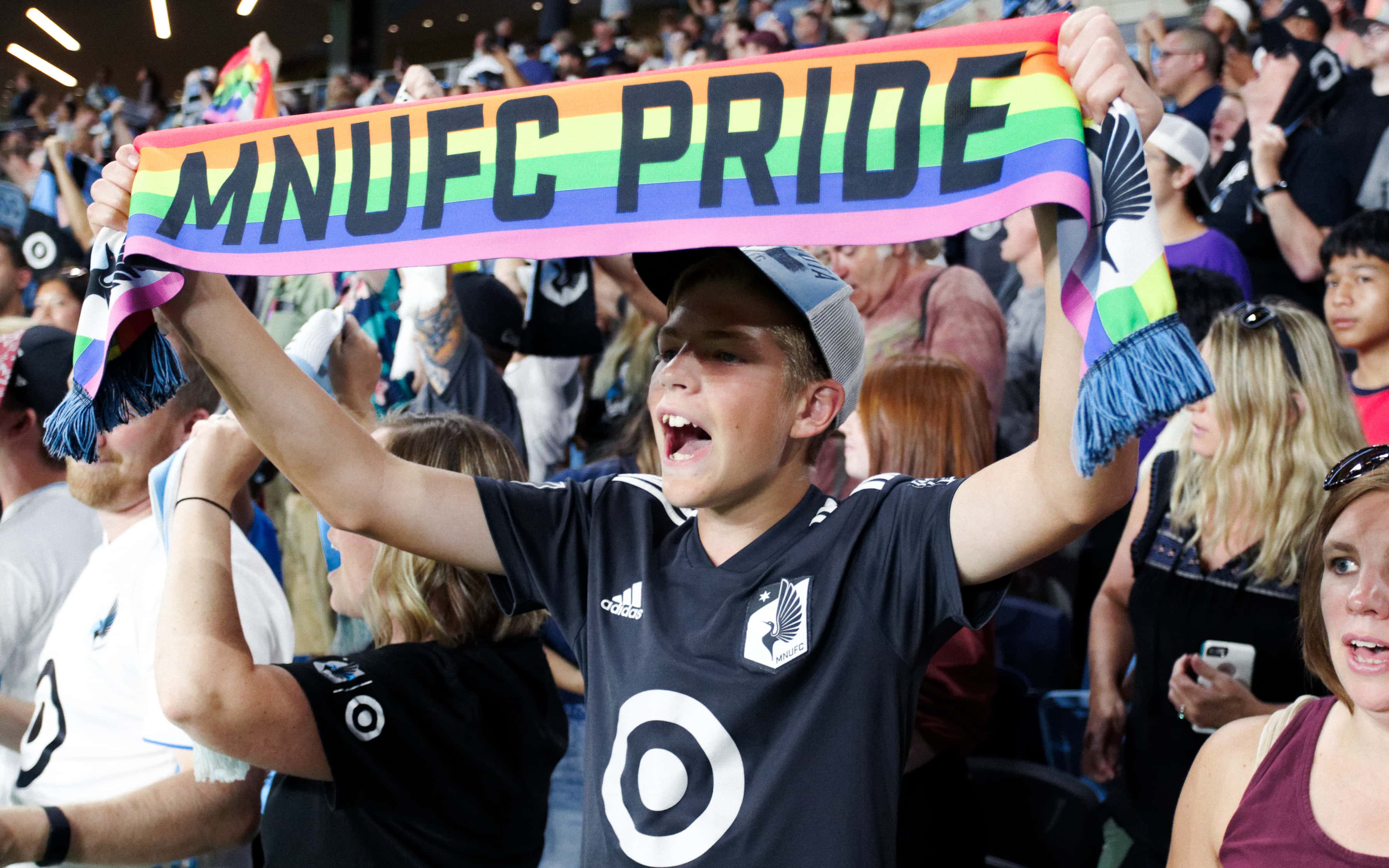 It wasn’t possible. It must have been a dream. The whole thing. It was a nightmare back-pass for Charlotte Independence defender Hassan Ndam, who laid the ball into the loose space between himself and his keeper. It was a dream-come-true for Valentin Sabella, who raced onto the gift, around the ‘keeper and slotted home. There were just two minutes left in extra-time of the Second Round game. The score was 2-2 now and penalties loomed. “What is happening?!” ESPN+ analyst Bobby Warshaw shouted in wonder and despair and disbelief. What was happening was the essence of the Open Cup. Florida’s amateur Soccer Soldiers, down a man for many minutes, were on their way to beating their second pro team in the 2019 tournament and capturing our imagination with their cheek and style and guts. “This makes no sense!” Warshaw, who knew the Open Cup as a player, screamed as the Soccer Soldiers moved on against all logic and heavy odds. He sounded almost resigned by the end. “This is the Open Cup,” he conceded, his voice withered from the excitement. It is indeed. It is indeed.

Eventually, the Soccer Soldiers had to lay down their arms – losing out to North Carolina FC in the Third Round. But that Sabella, just out of high school, was so good against the Independence that they signed him on a pro contract. Go find a more Open Cup anecdote. We’ll wait…

The Cupset – It is Written

There is romance. Always. There are dreams worth dreaming. Little David can win. He’s got a rock and an arm and there are soft spots in the giant’s armor. There’s one every year. An amateur team, maybe two, that find something they didn’t know was there. They scale walls. Their goalkeepers grow to fill the whole of the goal. Their strikers find holes where they aren’t. Last year it was NTX Rayados, before that Christos FC of Baltimore in 2017. Before that someone else and all the way back as far as you want to look at the 106-year-old Open Cup. This year, we had Orange County FC. Their smiles are ancient. Their heroics, biblical. Their run to the Fourth Round, and a date with LA Galaxy which they eventually lost, was as thrilling and joyful as it was pre-ordained. 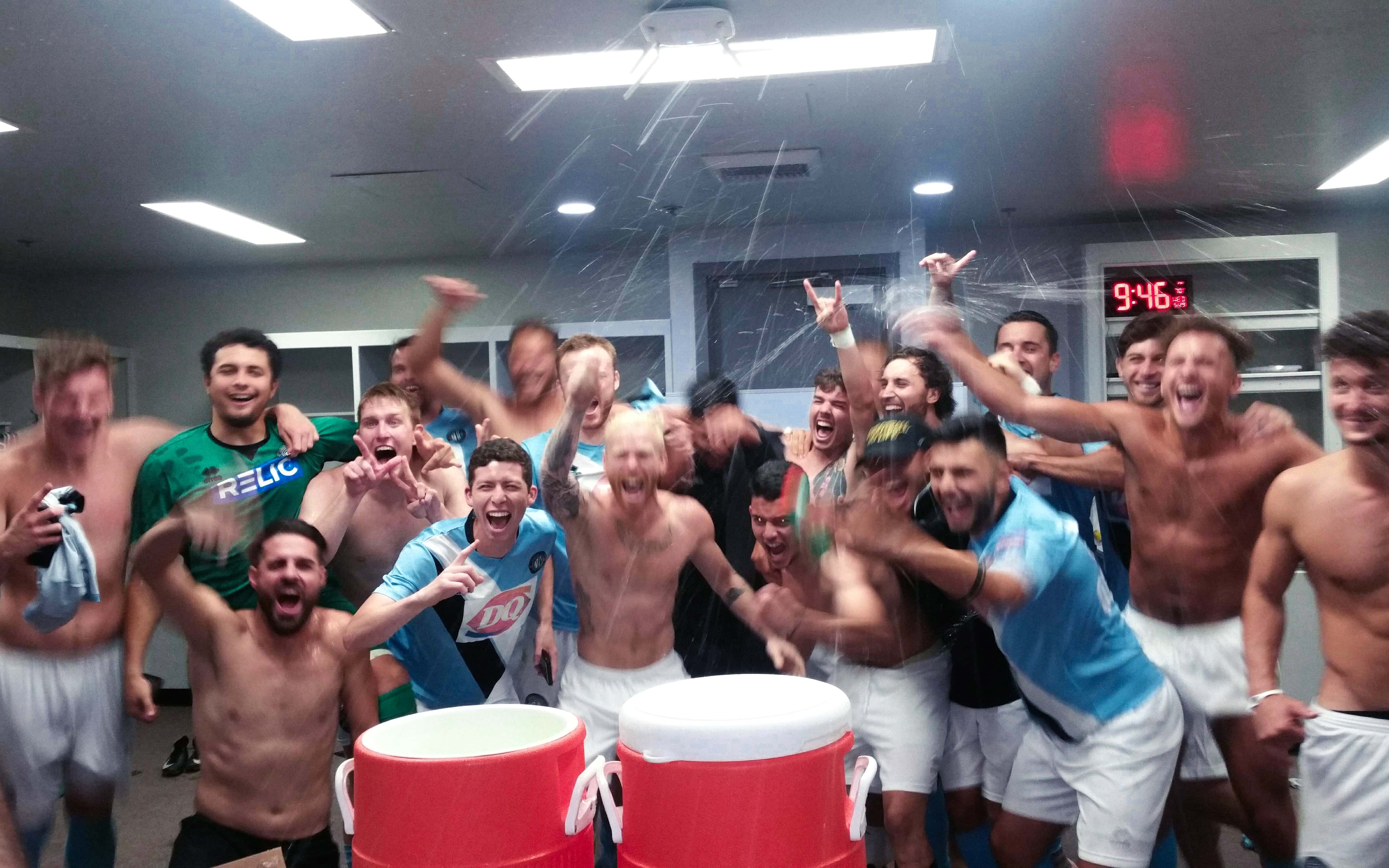 Orange County FC flew the flag for the amateur underdogs

What Happened in Vegas…

There was something in the air in North Vegas. In that old ballpark near the Strip. Eric Wynalda, coach of the all-pro Las Vegas Lights, on one side. Paul Caligiuri, his old roommate with the U.S. National Team, was on the other, in charge of the amateur men from Orange County. The first goal, from Cody Shelton, started the whispers. Upset. Cupset. Whatever you’ll call the miracle. Then another fell. It was a tragi-comic own-goal. The Lights, a man down, clawed back. They tied it near the end. But it was already over and they didn’t know it. The sling was spinning, making a whistle in the air, and the stone had been flung. Blake Frischknecht looks awkward, but he’s a killer. He’s a King, like old David was. He turned up at the back post unnoticed – no small feat for a young man well over six feet and built like an ox. He volleyed home. 3-2 with only moments remaining! Cue the celebrations, the thick romantic scribbles. And another! This one from Oscar Flores who tiptoed into the Lights goal, and the giant was down. Goliath wasn’t getting up. The OCFC players hardly knew where to turn in celebration. Their fists in the air and their wide smiles seemed to ask a question in a long-gone language. Goliath who? 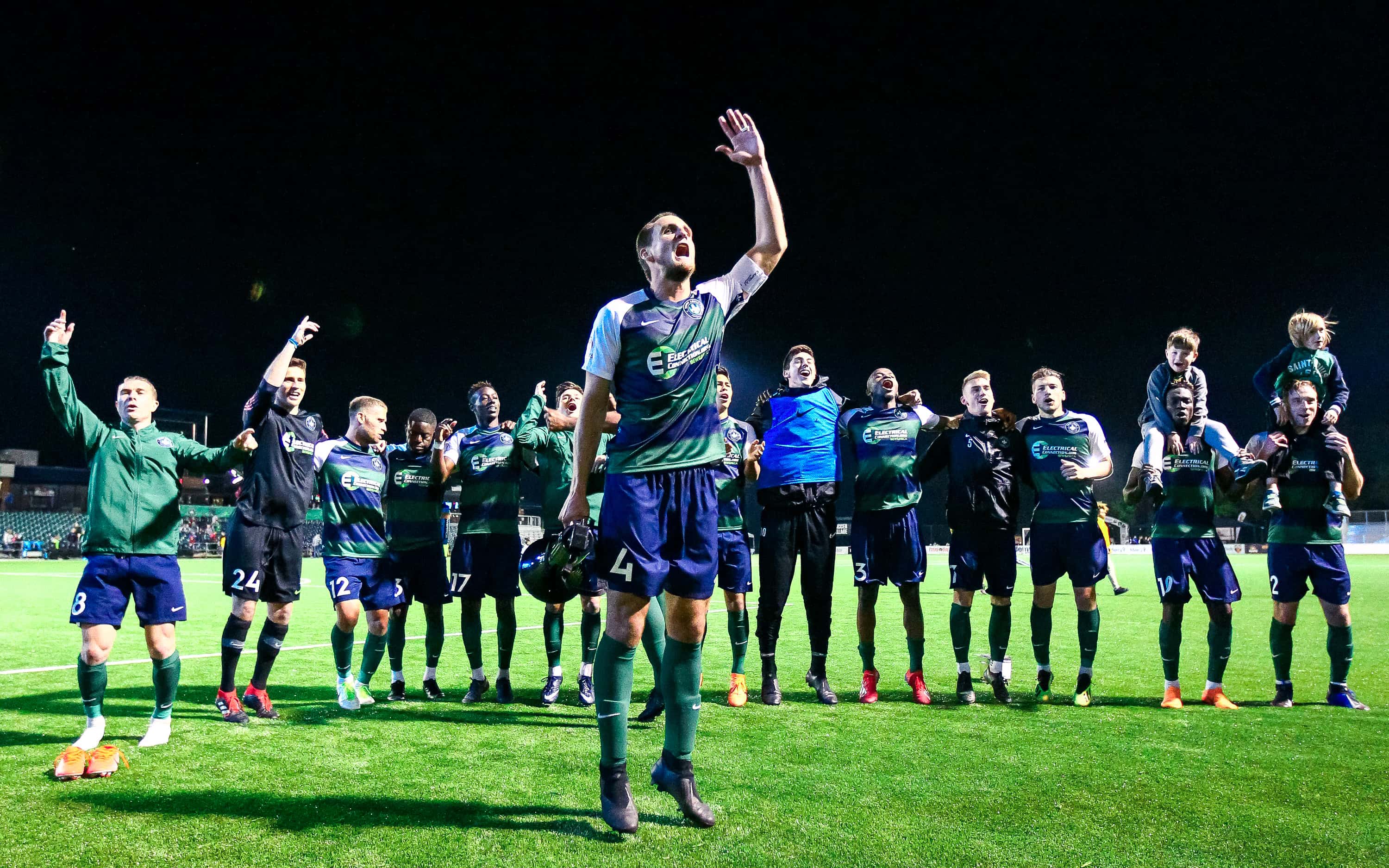 There are those moments. They happen every year in this old Cup. And it’s not just the amateurs but the second-tier pros too. Underdogs force their way in and send their so-called betters home with a lesson about what you can (and can’t) take for granted. New Mexico United, from out-of-the-way Albuquerque, won a fourth game on the road – and their second against an MLS opponent – when they traveled all the way to the campus of Southern Methodist University to see what 2016 champs FC Dallas were made of. A man named Sam Hamilton, center-back and an unlikely scorer, won the day. His second-half strike after a goalmouth scramble has his name alive in Open Cup lore henceforth. It was another Sam, Captain Sam Fink of Saint Louis FC, who sealed the deal in Fenton, Missouri in that same round. A native of the city, and another humble center-back, he climbed highest at the back post to head home and topple MLS’s FC Cincinnati. That goal, the roar and the exuberance and the flying beer in the stands, go down in the loose record of unexpected and happy surprises in a tournament that breathes them like air.