CARIACICA, Brazil (Oct. 27, 2019) – The U.S. Under-17 Men’s National Team fell 4-1 to Senegal in its opening Group D match at the 2019 FIFA U-17 World Cup. Heading home the joint-fastest USA goal at a FIFA U-17 World Cup, Gianluca Busio opened the scoring in just the third minute, before Senegal found an equalizer before halftime and closed things out with three second-half goals.

Going out on the front foot, the USA took the lead early on as Joe Scally comfortably collected the ball in space on the right and served a picture-perfect cross for Busio who powered home the opener just three minutes into the match. The goal gave the Raphael Wicky’s side a dream start at the tournament, also tying the USA record for earliest at the U-17 World Cup first set by Brian Kelly during a quarterfinal tie with Qatar at the 1991 edition in Italy.

Senegal commanded more control after the first quarter hour, as Issaga Kane forced a diving stop out of USA goalkeeper Damian Las in the 20th minute. Diallo Samba also broke free on the right before misfiring his effort past the post.

Just as it seemed the USA would take the lead into halftime, Senegal equalized through Souleymane Faye in the third minute of first-half stoppage time. Faye fired the tying goal past Las just moments after referee Istvan Kovacs utilized the video assistant referee to confirm that the Senegal striker’s 43rd minute yellow card would stand, with the VAR process allowing additional time to be added on to the first half.

The USA nearly restored its lead 10 minutes after the break. Starting with a short goal kick from Las, Wicky’s side connected a number of passes out of the back before breaking lines and leading to Busio’s effort in the box being nodded out for a corner kick. On the take, Gio Reyna sent a swerving ball to the near post which found Tayvon Gray. His initial volley was saved off the line by Birame Diaw, the Senegal defender advancing to turn away the rebound effort as well.

After that scare, Senegal came back to force two big saves out of Las, first turning away Aliou Balde’s well-taken hit off a free kick in the 67th minute before standing tall to hold on to Samba Diallo’s header in the 70th minute.

Senegal found the advantage two minutes later, when Ba quickly sent a ball over the top for Souleymane Faye who saw his initial attempt saved by Las, before Aliou Balde buried the rebound. With the USA pushing forward, Senegal made it 3-1 just two minutes later as Amete Faye deposited a deflected ball at the back post.

The USA’s hopes of gaining a point out of the match were dashed when Gray was shown a red card after fouling Souleymane Faye as the last man back in the 87th minute. With the following free kick about 20 yards out, Senegal closed the scoring as Pape Sarr fired a free kick into the top right corner.

Up Next: The U-17 MNT remains in Cariacica for is second Group D match where it will look to bounce back against Japan on Wed., Oct. 30. Kickoff from Estádio Kléber Andrade is set for 7 p.m. ET and the match can be seen live on FS2 and UNIVERSO.

USA – Gianluca Busio (Joe Scally), 3rd minute: It took the USA no time to get on the scoreboard. After the team’s first foray forward, the U.S. continued pressing with right back Joe Scally finding space on the flank. The New York City FC product swung in a pinpoint cross which saw Gianluca Busio make a late run into the box before rising between two Senegal defenders to power a snap header past ‘keeper Ousmane Ba. USA 1, SEN 0

SEN – Souleymane Faye (unassisted), 45+3 minute: Stoppage time crept past the originally allotted two minutes when Istvan Kovacs took additional time for video assistant referee review of a foul committed by Faye moments earlier. After Faye’s stoppage time yellow card was confirmed, Senegal goalkeeper Ousmane Ba pumped one more effort forward and the ball fell for Faye who hit a hopeful effort from the top of the area that beat Las inside the left post just before the break. USA 1, SEN 1

SEN – Aliou Balde (unassisted), 72nd minute: Senegal pulled ahead after the USA was caught out in transition following a free kick. Ousmane Ba cleverly collected the ball and alertly started a counter with a long drop kick into space for Souleymane Faye. The goal scorer broke into the box unchallenged, but saw his initial effort well saved by Las. The rebound bounced into the path of the substitute Balde, who finished into the empty net. USA 1, SEN 2

SEN – Amete Faye (unassisted), 76th minute: Down a goal, the USA began pushing more numbers forward, but was caught out again. Souleymane Faye was fed towards the end line in the area, before centering a low pass which Las got a paw to before Amete Faye buried it at the right post. USA 1, SEN 3

USA – Damian Las, 20th minute: After the USA had difficulty clearing the ball, Pape Sarr pounced and took an initial hit from outside the area that pinged into the box. There, Issaga Kane’s follow up forced Las into a diving stop to turn the ball around the right post and out for a corner kick.

SEN – Birame Diaw, 55th minute: The USA earned a corner kick after a great build-up out of the back led to Busio’s effort in the box being nodded away. On the ensuing take, Gio Reyna sent a great ball to the near post for Tayvon Gray, who connected with a mid-air volley. The ball squirted past Ousmane Ba but was saved by Diaw who was stationed right on the line. The rebound came back for Gray, but Diaw advanced a few steps to make the second block before it was cleared.

USA – Damian Las, 67th minute: Senegal earned a dangerous free kick after Scally was whistled for a foul outside the box on the right. Pape Sarr played a short ball to his right for Aliou Balde, whose first-time effort was met well by Las who parried the ball out for a corner kick at the near post. 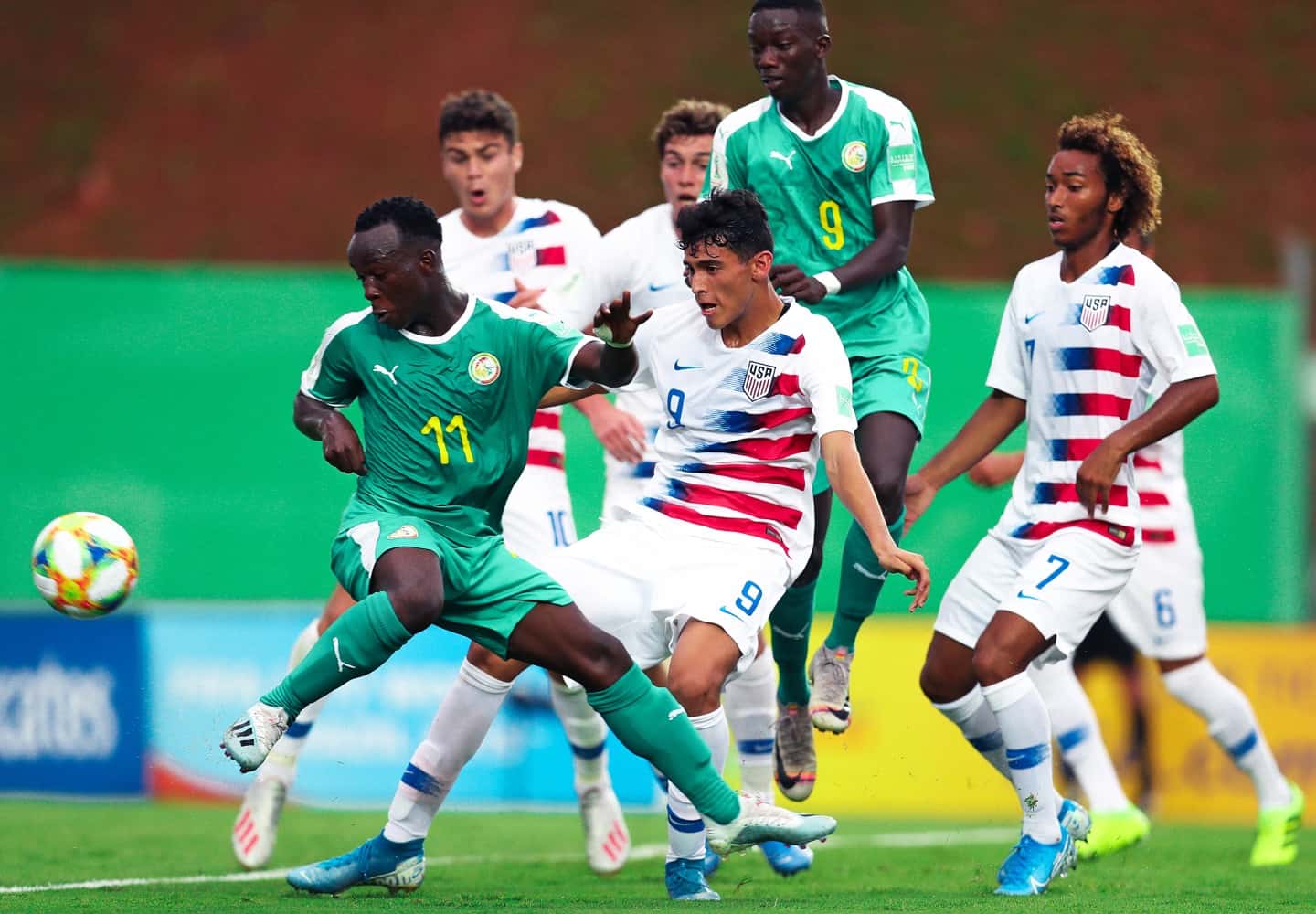 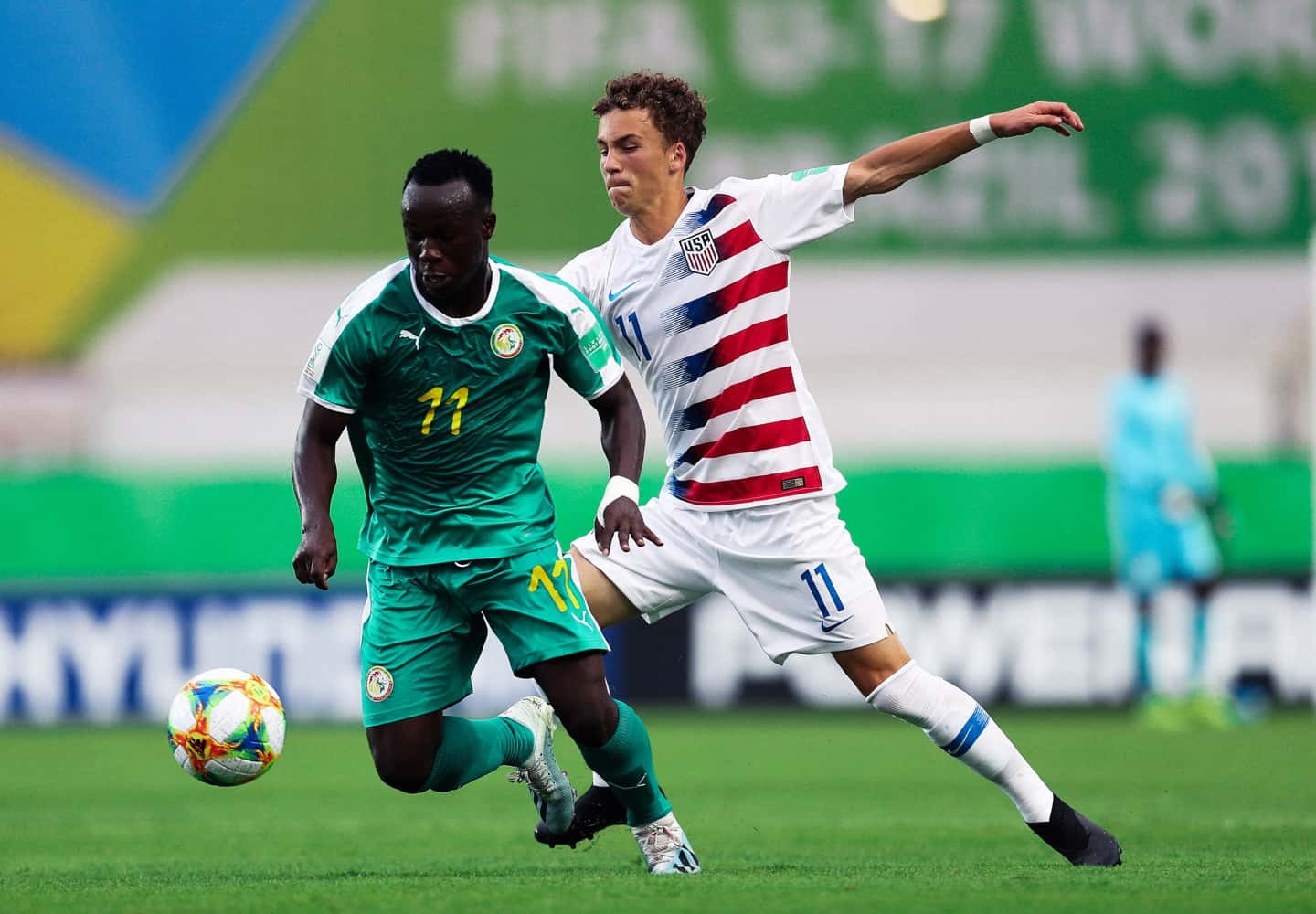