The lack of a professional, semipro, or even an amateur soccer club in Denton, Texas, left Sam Garza – once among the country’s top prospects – and motivated fanatic Damon Gochneaur with precious few options. After seeking their soccer outlets elsewhere, the two have returned home and joined forces to help guide the Denton Diablos, a team that was nothing more than a distant dream a year ago, into existence and the 2020 Lamar Hunt U.S. Open Cup.

Growing up, Garza didn’t let the lack of soccer opportunities in Denton, his small hometown of under 150,000 inhabitants on the northern edge of Dallas-Fort Worth, slow him down. He traveled to the nearby youth hotbed of Dallas to play for big-city powerhouses the Dallas Comets and Solar Soccer Club. In 2008, the year he graduated from Edward S. Marcus High and was named the top high school player in the country, Garza was called up to the U.S. U-20 Men’s National Team.

Hard Luck for a Hometown Hero

Unfortunately for Garza, a torn ACL kept him out of the 2009 U-20 World Cup in Egypt, a tournament that showcased such American up-and-comers as Brek Shea, Mix Diskerud and two-time MLS Defender of the Year Ike Opara, who lifted the U.S. Open Cup in 2017 with Sporting Kansas City.

Despite the injury setback, Garza was destined for bigger things in the American game. He was on everyone’s radar. Leaving the college scene early, Garza was selected sixth overall in the 2012 MLS SuperDraft by the San Jose Earthquakes and joined a glittering list of previous Generation Adidas draftees that includes DaMarcus Beasley, Clint Dempsey and Jozy Altidore. 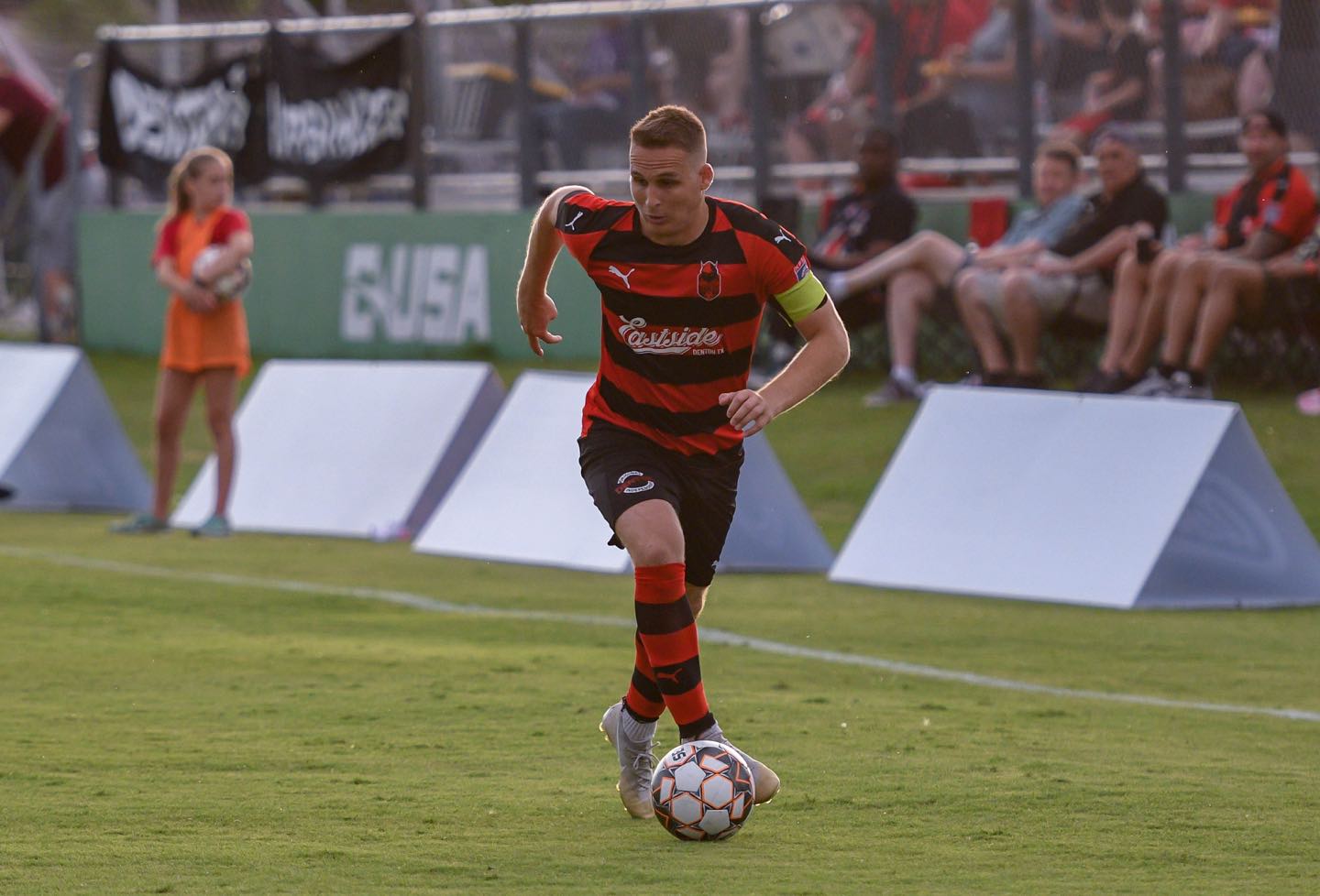 Following his stint with the Quakes, Garza played in the second-tier United Soccer League (now the USL Championship) for Arizona United SC (renamed Phoenix Rising FC in 2017) and Seattle Sounders 2 after attracting the attentions of five-time Open Cup winning coach and National Soccer Hall of Famer Sigi Schmid. But a series of injuries, including a second ligament tear in his knee, seemed to spell the beginning of the end for the once-promising Garza. Suffering burnout and not enjoying the game the way he used to, Garza, still in his twenties, announced his retirement from professional soccer and returned to the Denton area in 2018.

At around the same time of Garza’s return, Damon Gochneaur, a soccer fanatic who never left the area, often dreamed of starting a team in town. Without a club to support, he drove to Fort Worth to cheer on the Fort Worth Vaqueros who, in 2014, joined the National Premier Soccer League (NPSL), a nationwide amateur league in the fourth tier of American soccer.

Close enough to scratch his itch, Gochneaur still pined for a team to call his own in Denton. And his dream came true in 2018 when he met with Vaqueros’ owner Michael Hitchcock at East Side Denton to enjoy a few fingers of Texas whiskey and talk soccer. The two became fast friends and Hitchcock, Vice President of LA Galaxy and President/General Manager of FC Dallas during his time in Major League Soccer, hopped on board with Gochneaur’s vision to bring a club to Denton. He saw the passion and the potential. And just like that, eight months later, the two friends turned co-owners and introduced Denton Diablos FC. 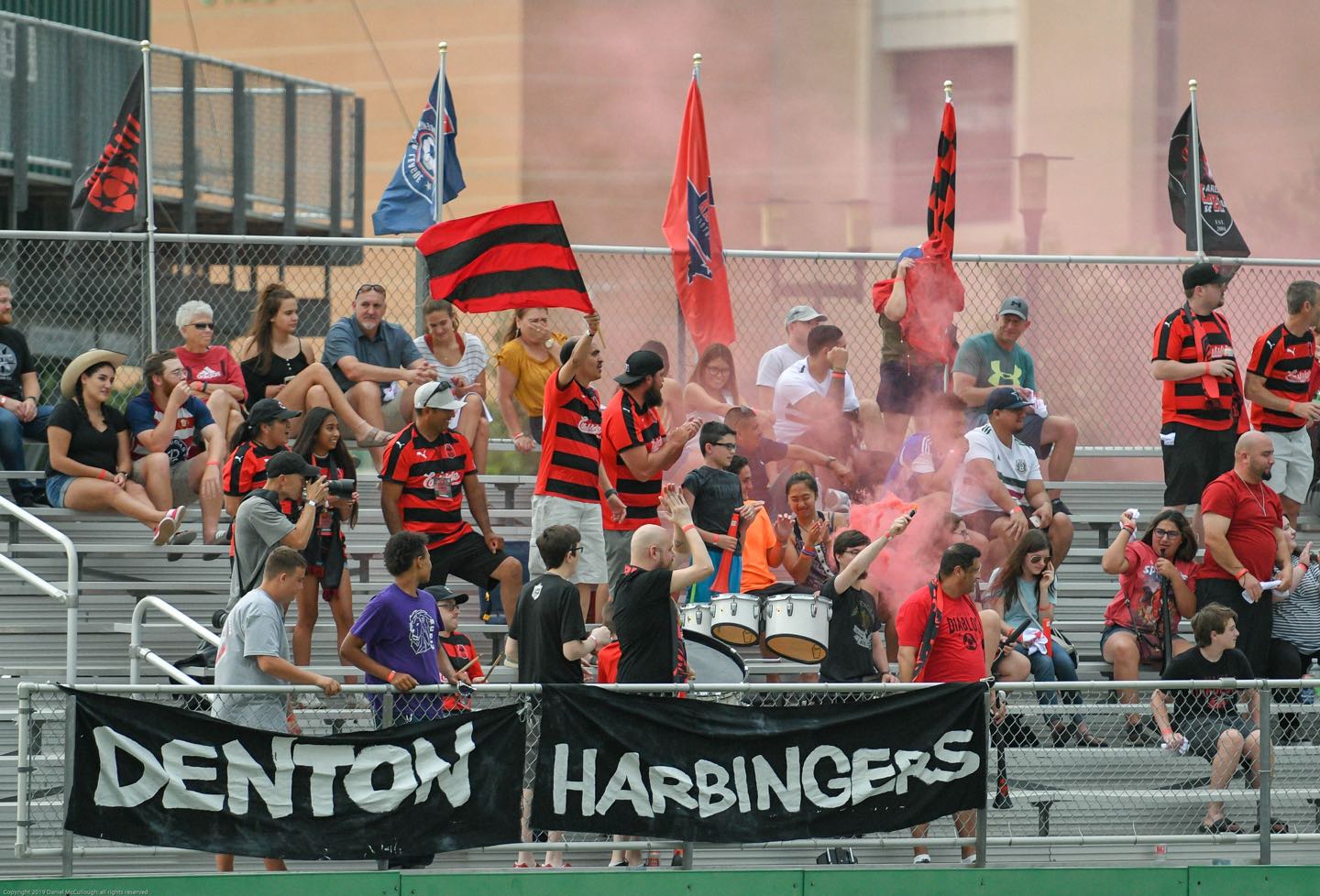 The first order of business for Gochneaur, 40, was to find a coach. He didn’t have to look far. While visiting his former high school, Edward S. Marcus (the same place where Sam Garza was twice crowned a state champion) Gochneaur was introduced to Chad Rakestraw, the 36-year-old head coach of the men’s varsity soccer team. After a few conversations, Gochneaur knew he had found the right man to help turn his vision from idle bar room chatter to on-field product.

“There are some special aspects of coaching a team from the town you are from,” remarked Rakestraw, who’s been involved in coaching in the Denton area for 14 years and showed Garza the ropes when he returned to town to begin his own coaching career. “I’m just trying to gather the best players and quickly establish unity with a group to go and win."

The first player Rakestraw called to join the Diablos? No surprise. It was Garza. He didn’t have to look far as the two shared the bench as head and assistant coach of the local high school powerhouse.

It took some convincing by Rakestraw as Garza truly believed his playing days were finished. But lucky for Rakestraw, and Gochneaur too, Garza was convinced that there might just be something special brewing in Denton. “For me, it was awesome to be part of a locker room again,” said Garza, who played alongside current U.S. Men’s National Team players Aaron Long and Cristian Roldan during his time in Seattle. “To be able to lead the younger guys and help them grow and develop as players has been a ton of fun.”

Garza, now 30, hasn't given up on coaching either. Although he sometimes fills in as Rakestraw’s assistant for the Diablos, his focus is on his role as head coach of the men’s varsity soccer team at his alma mater Edward S. Marcus High School. “Coaching has given me a passion for soccer that I never really knew I had,” noted Garza, who coaches FC Dallas and USMNT star Paxton Pomykal’s younger brother, Porter, in a Marcus HS side currently enjoying an undefeated season with a 10-0-1 record. “It has been super rewarding and I love it.”

The Start of Something Good

With the help of Garza and a few more local signings, the Diablos joined the NPSL in May of 2019, kicking off an instant rivalry with the nearby Vaqueros. And it didn’t take long for the men from Denton to get their feet under them.

Garza finished with a team-high in goals and assists and was named the team’s Most Valuable Player in an inaugural season that saw the Diablos finish second in the Lonestar Conference. Aside from their standout, hometown star, the Diablos are a team full of young, up-and-coming talents in the Denton area combined with a group of no-nonsense, nine-to-five strivers. Besides local college players, the team is made up of teachers and accountants too. The goalkeeper for most of the 2019 season, Estevan Vasquez, works as a construction worker.

“Our player pool is still coming together,” admitted Gochneaur, who was thrilled to see the club take root in the area and an independent supporters group, calling themselves The Harbingers, take the team to their hearts. “These aren’t guys that can be dedicated every day of the week to soccer.” 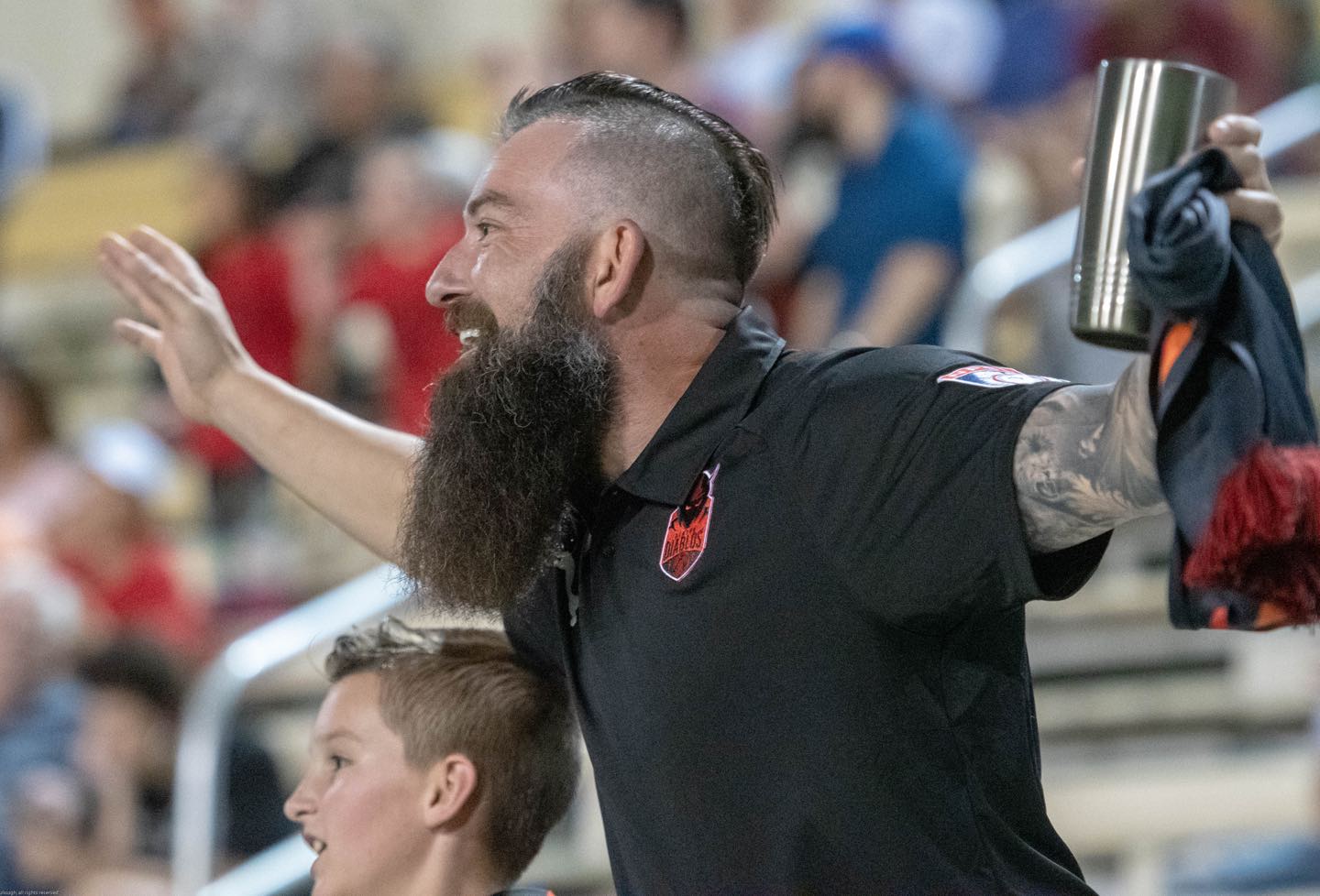 Damon Gochneaur was the vision behind the Diablos

Since their inaugural match, Gochneaur and the Diablos have not lost sight of the club’s roots. East Side Denton, the very same bar where Gochneaur and Hitchcock initially met, serves as the club’s sponsor and venue for front office meetings every Wednesday evening. “While this is a club with professional goals, the Diablos has to be fun and something we like doing,” added Gochneaur. “Nobody wants to get together to go over spreadsheets. Nobody wants to get together to go over accounting details. All of that is easier if we are sitting with a cocktail in our hand at East Side Denton.”

After going through the 2020 Open Cup application process, the Diablos were hoping for the best in late January when the First Round games were announced to the public. For Denton, it was all good news. The Diablos earned a berth in the 107th edition of U.S. Soccer’s National Championship – the oldest soccer tournament in the country – and they would be hosting too.

Some news is worth climbing the ladder at the bar.

It’s confirmed! Your @DentonDiablos will be competing in the 2020 #USOpenCup


For Garza, an old hand with experience at the top of the game, it won’t be his first Open Cup rodeo. During his rookie season with the Earthquakes, Garza scored two goals in a 2-1 come-from-behind victory over the Fort Lauderdale Strikers in the Third Round of the Open Cup. That same year, Garza helped the Earthquakes lift the 2012 Supporters' Shield – awarded annually to the team with the best record in MLS. His experience, and his silverware, will act as inspiration for his current workaday teammates. 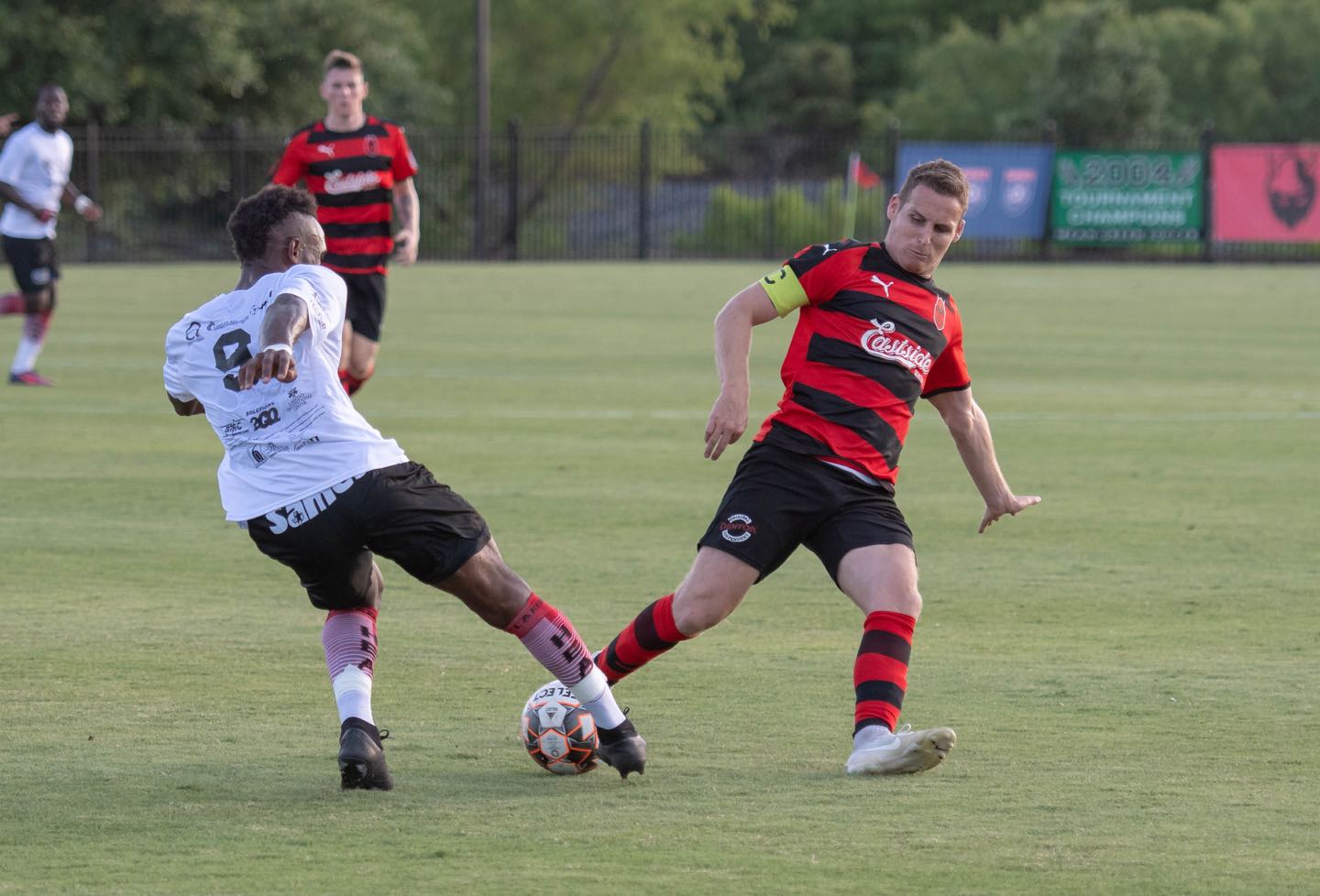 Although overjoyed about hosting their first-ever Open Cup game, the Diablos have their work cut out in the First Round when they meet NTX Rayados, an amateur team with a rich history in the state of Texas, who are playing in the Open Cup for a ninth consecutive year. The two Texas clubs are set to face off on March 25 at the University of North Texas Soccer Stadium (8 p.m. ET / 7:00 CT; ESPN+).

“The U.S. Open Cup is the pinnacle for us and the greatest opportunity that exists for our players to go out and showcase themselves,” said Gochneaur, who believes that qualifying for the Open Cup validates the positive direction of the young club he helped will into existence. “The tournament is a sacred part of American history and the soccer culture of the United States. Just qualifying is a bucket list opportunity and a dream come true.”