The Aces of Atlantic City are looking toward their first Lamar Hunt U.S. Open Cup game with a plan in place for long-term success and community inclusiveness.
Amadi ThiamMarch 6 2020
Open Cup

Atlantic City Football Club, heading into their third season in the National Premier Soccer League (NPSL), are trying to build the kind of foundation that lasts. In a city that skews toward hit-big or hit-the-skids, the young club’s founders prefer a horizon that connects, extends and reaches far into a long-haul future. And everyone at ACFC – from the big-vision owners to the players doing the heavy lifting on the pitch – see the 2020 Lamar Hunt U.S. Open Cup as a potential step closer to that shining, shimmering future.

“This is a huge opportunity for us; this is that any-given-day people talk about,” said 24-year-old midfielder Noah Blodget, returning to the side for his third season. “Since we started [in 2018] qualifying for the Open Cup has been a priority. It’s a chance to put ourselves and our club on the map.”

When people think of Atlantic City, New Jersey, the boardwalk likely springs to mind.  Those throbbing bulbs on the big casinos like the Tropicana (local sponsor of ACFC), the beachfront property soaked in the Atlantic’s heavy mists and all the seasonal fun on offer. A city of just 40,000, AC draws nearly 30 million tourists every year. An extremely diverse city, the majority of its residents are people of color. And that’s more than just a footnote for the club’s organizers.

For club owner Andrew Weilgus, the city’s demographics are key to the team’s identity. “If you’re serious about growing the game, you need to appeal to everyone and there’s a strong focus on becoming the team for all of these different kinds of people,” he insisted in a conversation with usopencup.com. For fans like Christine Cupo, this philosophy is one of the major reasons she supports the club. “In 2017, the emergence of Atlantic City FC added another dimension to life and the reinvigoration of AC as a whole. I’m excited to see how they evolve having something to be proud of and call their own.”

Offering an eclectic fanbase a quality match-day experience in a region that was crying out for it seemed like a no-brainer to Weilgus. And he sees the club’s participation in the nation’s oldest soccer competition, the 107-year old U.S. Open Cup, as another step in the right direction. 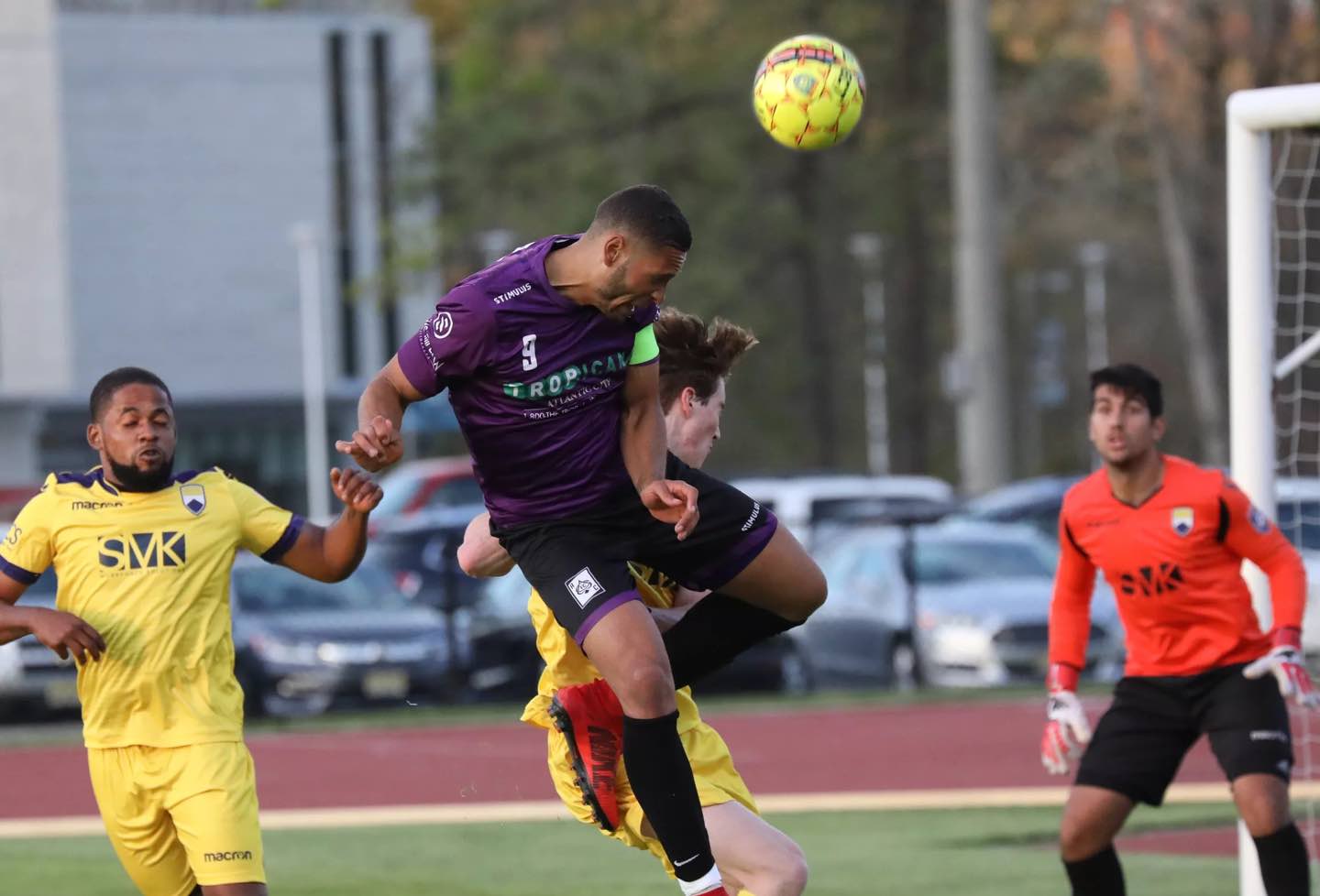 Atlantic City in action on the shore (Photo courtesy of BrotherlyGame.com)

As a semi-professional team with limited resources, surely that’s easier said than done. But Atlantic City FC take their task seriously. “We’re focused on building our own house,” explained Weilgus. “I believe the focus has to be on community: what can I do for soccer in my community? How can I help it grow in my community? How can we develop players, get them seen, get them scholarships, find them pathways into the sport whether as players or as people?”

Last year’s team, which started strong with a rout of West Chester United, went on to finish first in the NPSL’s Keystone Conference. The breakdown of players in the team, according to Blodget, was a broad cross-section of talent and experience. “We’ve had about five or six guys who have experience in MLS or USL,” said the player, who’s pursuing his coaching badges while working at the soccer shop he patronized as a kid: Angelo’s Soccer Corner in Berwyn, PA. “Maybe eight are out of the DI and D2 college system and some of the guys are also playing overseas at some points in the year. The rest are a bunch of local guys still playing in college.”


Vision from Top to Bottom

In order to properly oversee the off-field organizational structure that Weilgus finds so important, he brought in a young, forward-thinking general manager in David Goldstein. “I signed up for this because I’m extremely passionate about building a club the right way from essentially a blank slate,” Goldstein beamed, clearly proud of the direction the club is heading in. “It’s my philosophy that if you do things the right way, you can create a club that competes at a high level. It doesn’t happen overnight, but we want to be the voice of the people who are actually from here. In terms of our mentality, we are a soccer team for the people of Atlantic City.”

Blodget, comfortable in many positions on the field, believes the owners’ big ideas and ambitious plans trickle down to the players in the locker room. “The ethos and the long view that Nick and Drew are taking really pervades things,” he said. “The guys who’ve been here a while have really bought into the idea of being a part of something built from the ground up. I mean that’s what you want as a player.” 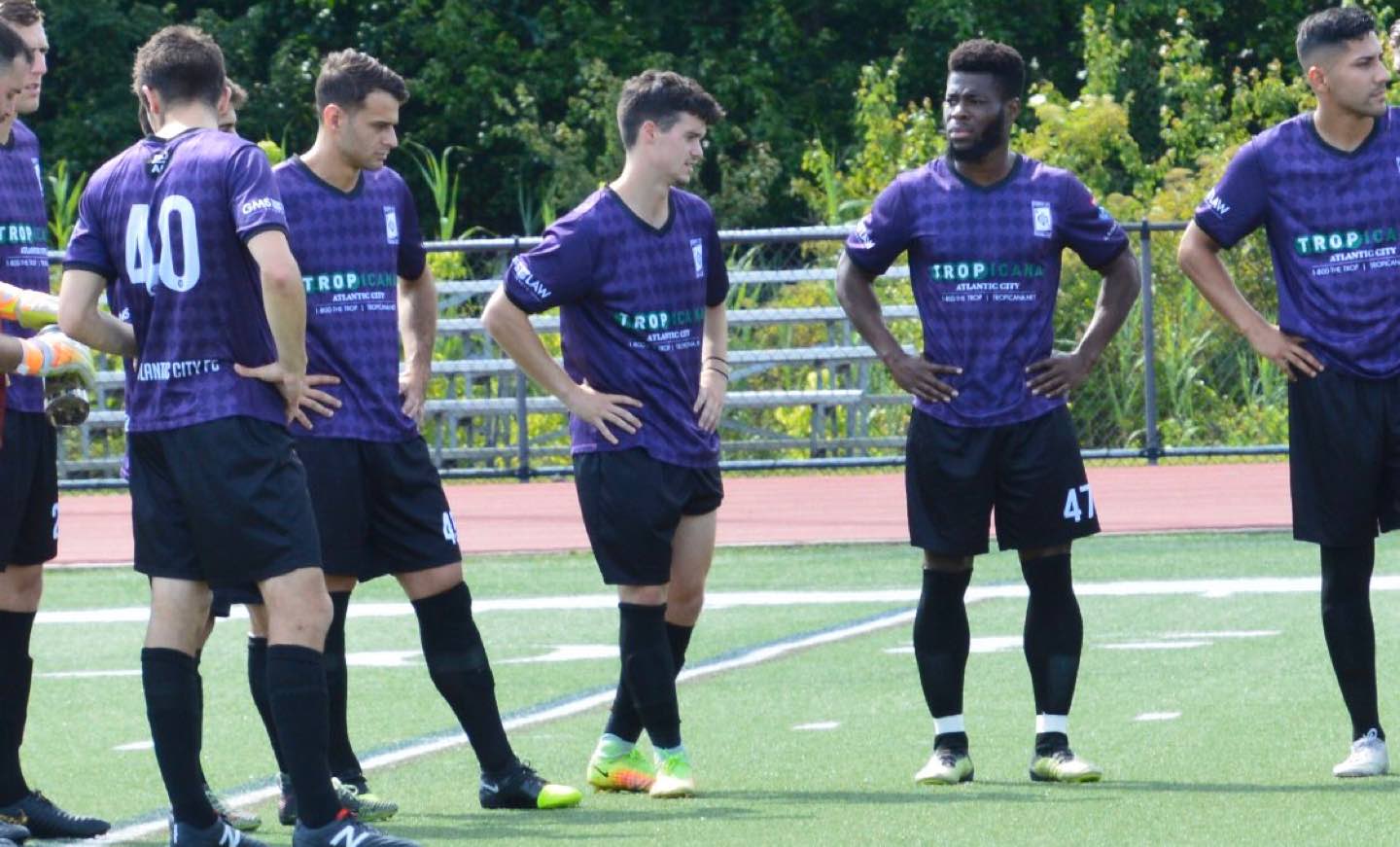 The Aces play Newtown Pride of Connecticut in the First Round (Photo courtesy of BrotherlyGame.com)

Atlantic City FC host 2019 National Amateur Champions Newtown Pride FC in the Open Cup First Round in late March, and there’s a sense that this is a major milestone in the Jersey club’s development. “I think it’s an indication that we’re doing the right things and that our process is working,” Goldstein added ahead of the game with the Connecticut side, based near Danbury, and the cream of the crop in the Connecticut Soccer League (CSL). “It’s not a box to check off, it’s a result of us going about things the right way. To be able to qualify for a national tournament and have the prospect of playing against professional teams is an honor but it’s also something we take seriously.”

No one has a better understanding of ACFC’s chances, and what they can bring to the tournament, than head coach James Galanis. He’s the former Technical Director of the New Jersey Olympic Development Program (ODP) and former head coach of Women’s Professional Soccer’s Atlanta Beat. Now President of New Jersey’s Universal Soccer Academy, Galanis is a renowned player development specialist and has for years been a private trainer and mentor for local superstar Carli Lloyd, a FIFA World Cup winner with the U.S. Women’s National Team. With an eye for talent and how to get the best out of developing players, he is uniquely positioned to manage a team in the Open Cup.


One Game – One Chance

“It’s exciting times for Atlantic City FC,” insisted Galanis, originally from Australia. “Cup competitions have a long history of surprises and we hope we can add to the list of teams that has made these types of competitions intriguing. We know we’re going up against a quality opponent that’s been playing together for years but we have our own strengths.”

“Cup games can get dicey,” said Blodget, who’s been through the tournament before with regional amateur powers West Chester Predators and the Ocean City Nor’Easters, just down the coast and across the Delaware Bay. “The games get weird and there’s a lot of psychology. Anxiety level comes in. There’s no replays. No reverse leg. No draws. It’s all right now. And you have to make that work for you.”

Atlantic City FC will certainly need to play to their strengths, as the Open Cup is notorious for big upsets and surprise scorelines. Despite the daunting nature of cup competitions, Galanis seems ready, eager even, to host Newtown Pride FC. “We have assembled a team of veterans, potential future MLS players and some of the top youth prospects from the area,” the coach said. “It's going to be an exciting night for everyone.”

For Weilgus, Goldstein, Blodget and Galanis, the fixture against Newtown Pride FC at Rowan University Soccer Stadium in Glassboro, N.J. (7 p.m. ET, March 25; ESPN+) offers a chance to assess the progress Atlantic City FC have made in just these few short years. They’ll have an excellent opportunity to provide their fans with a glimpse into the kind of high-level competitions they hope to be the norm in years to come. Above all, they’ll want to show that they can hold their own. “We’re an ambitious club,” concluded Goldstein. “And we see this for what it is: a massive opportunity.”