Unsung Hero: Chris Armas and His Contributions to the USMNT

In November 1998, Chris Armas recalls finding himself in international limbo, waiting patiently in his hotel room in Palo Alto, Calif. for word that he had been cleared to play for the U.S. Men’s National Team.

Then came a mysterious phone call.

"You owe me your first born," a voice on the other side said.

Armas didn't know who the caller was.

"Is this the front desk? Who is this?" he replied.

"This is Sunil Gualti," the voice said. "Welcome to U.S. Soccer."

A stunned and happy Armas almost fell over when he heard the news from someone who would become U.S. Soccer president someday.

Perhaps not the most traditional way to discover you can play for your national team, but Armas finally reached one of his goals. Several days later on Nov. 6, the best American defensive midfielder of his generation made his international debut in Bruce Arena's first game as USMNT head coach in a scoreless draw with Australia in San Jose, Calif. 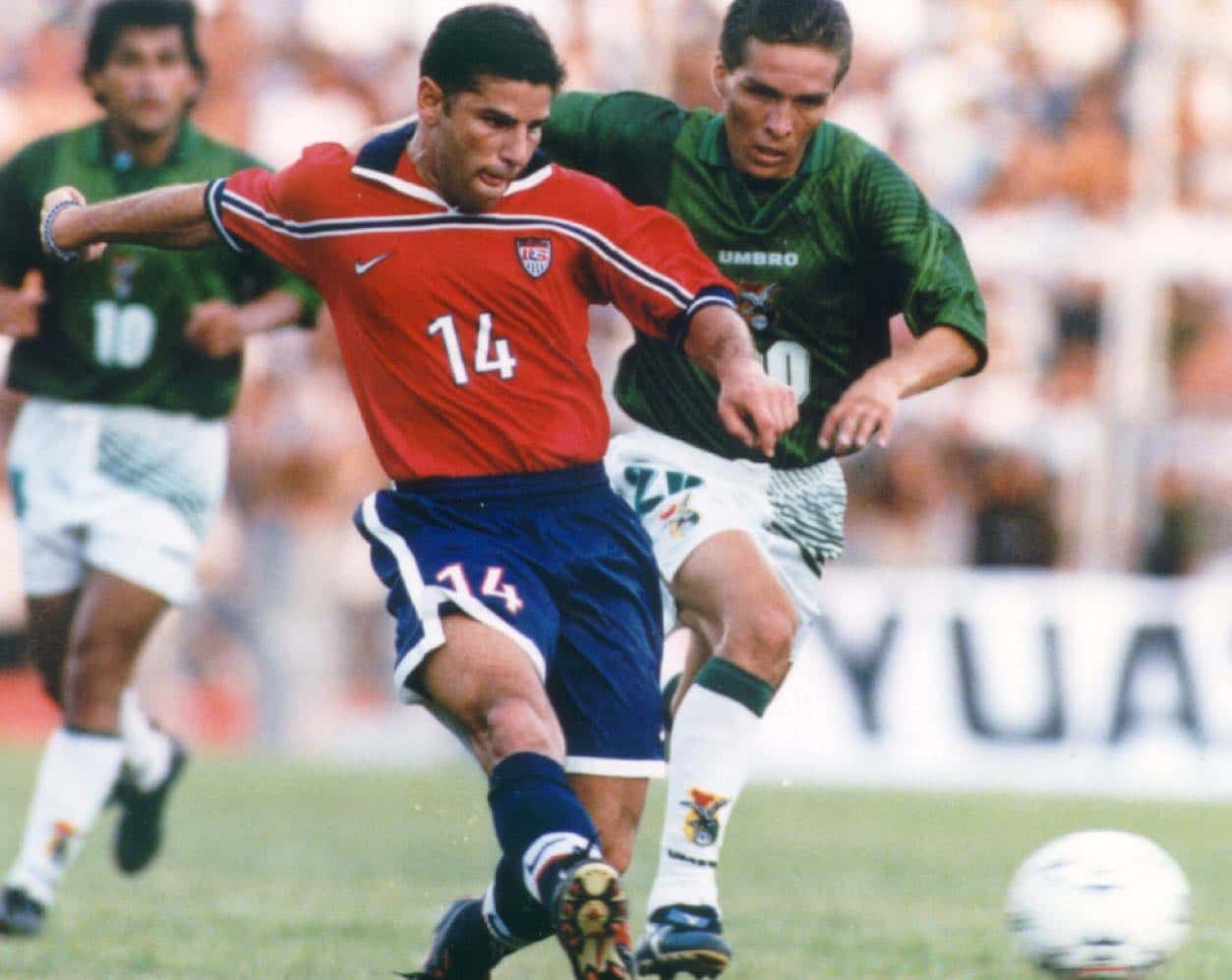 Chris Armas made his second USMNT appearance in a 0-0 draw with Bolivia on Jan. 25, 1999 in Santz Cruz, Bolivia

At the time, it was thought because he had played in five Caribbean Cup games for Puerto Rico in 1993-94, Armas could not play for another national team. That is, until Concacaf ruled that he could because those matches were not recognized by FIFA and thus considered friendlies.

Armas, 47, went on to wear the USA uniform 66 times. During that period, he became a tenacious force to be reckoned with, shutting down the best creative midfielders in Major League Soccer starring for the Chicago Fire.

Things were moving fast. It was club ball, national team, club to country non-stop over the course of eight years. I was in a certain mode, a mentality that I was coming and going back and forth. There was no real offseason. It was always important to play well, and you were looking forward to that e-mail that would come from U.S. Soccer: 'Hey, congratulations, you were named to the 23-man roster'.
Chris Armas

Some players are born defensive midfielders. Some are made. You might say Armas was a combination of both. At Adelphi University, Armas was a box-to-box midfielder, standing out on both sides of the ball. While his role slowly changed with the Long Island Rough Riders (U.S. Interregional Soccer League) and LA Galaxy (Major League Soccer) - he began to stay back more while his central midfield partner went on the attack - he did set up the winning goal in the 1995 USISL final and scored in a losing effort in the 1996 MLS Cup.

"I did a lot of defensive work in there, naturally because that was my quality in terms of covering ground, covering up passing lanes, winning second balls, taking time and space away from the opposition," Armas said.

After two years with the Galaxy, the Fire acquired Armas in 1998, which became a special season as the expansion side won MLS Cup and the U.S. Open Cup in a span of five days.

"That was a magical year for the Chicago Fire, and it was an incredible year for me because I was part of a team that won the double," Armas said. "I got my first cap with the national team. Bob Bradley [head coach] really had a lot of belief in me and gave me an opportunity that really helped me grow and get exposed to the national team." 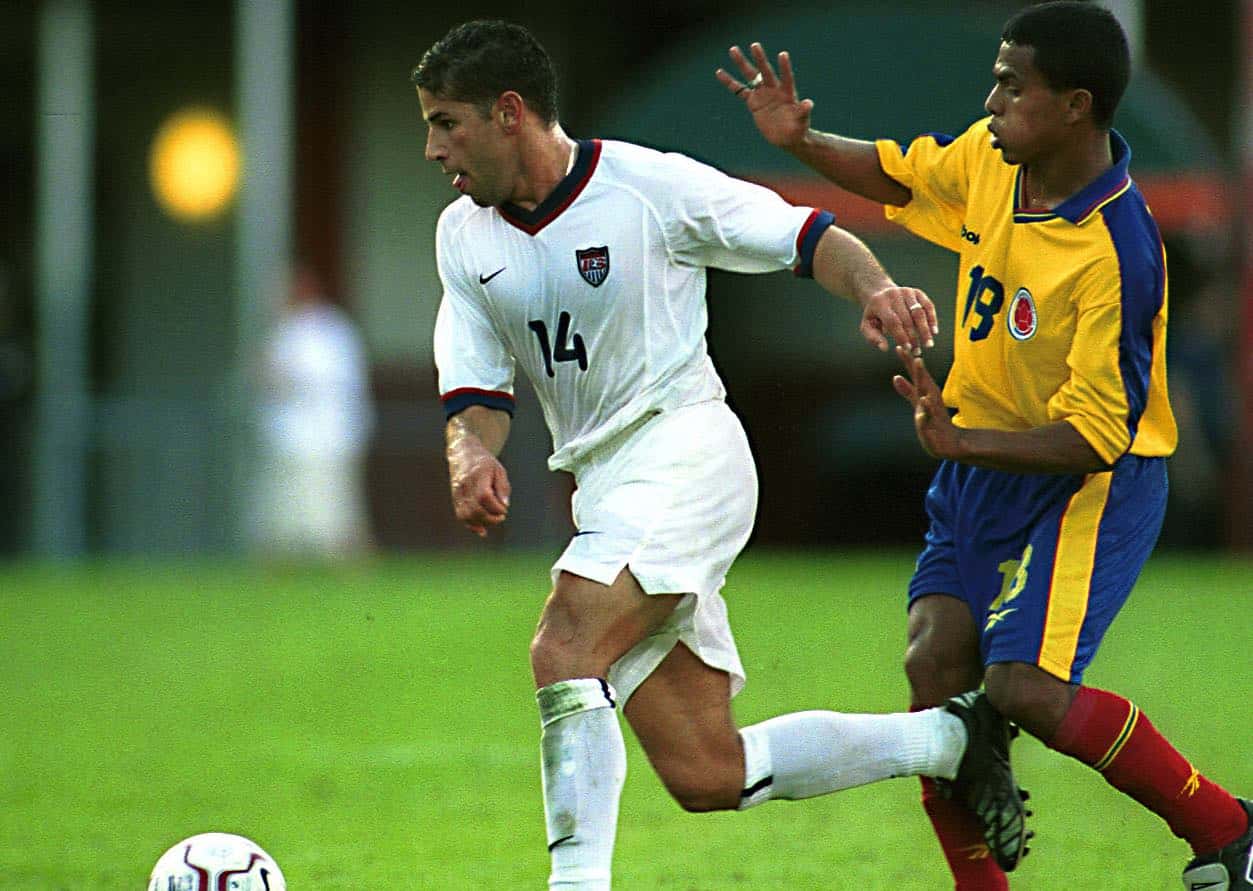 Chris Armas scored one of his two USMNT goals in the Concacaf Gold Cup quarterfinal match against Colombia on Feb. 2, 2000 in Miami.

Well, Armas certainly had something to do with that, teaming with Peter Nowak in the middle of the Fire midfield for an unstoppable one-two punch.

When he didn't have the ball, Armas became quite adroit at denying the opposition of it. His numbers against the league's leading creative midfielders that season were mind-boggling. The quartet of Marco Etcheverry, Maricio Cienfuegos, Preki and Carlos Valderrama totaled 35 goals and 60 assists in 100 games. When they went up against Armas, there was a precipitous drop in their production. They combined for only two goals and four assists in 15 games, including the playoffs.

Armas, a five-time MLS Best XI selection and six-time all-star, admitted he still wasn't happy he allowed that many goals and assists.

"Those guys are four of the best all-time in the league in terms of playmakers," he said. "I am annoyed at myself as we speak that I gave goals and assists against them at all. I would like to actually see those because did they come from dead-ball situations, where they not my part of the field? Where did I go wrong?

After honing his skills and position for so many years, Armas said he developed a sixth sense on how to play certain players. It was a combination of competitive desire, concentration and keeping it simple.

"I was able to really focus on the task and I think I could do it for long stretches of time, longer than my opponent or then maybe guys I earned starting spots over. That I could really be my concentration levels and focus on what was going on was really high.

“I could often operate being in the moment. I could think about a lot of different things at the same time. Where is the ball? Where is the space for my teammates around me? What time is it in the game? Are you up a goal, down a goal? My brain could help me anticipate where that next ball would go. It helped me almost [to be] one step ahead of things because I was able to read the games. When I wasn’t as  as fast as the other guy, that allowed me to win the race. 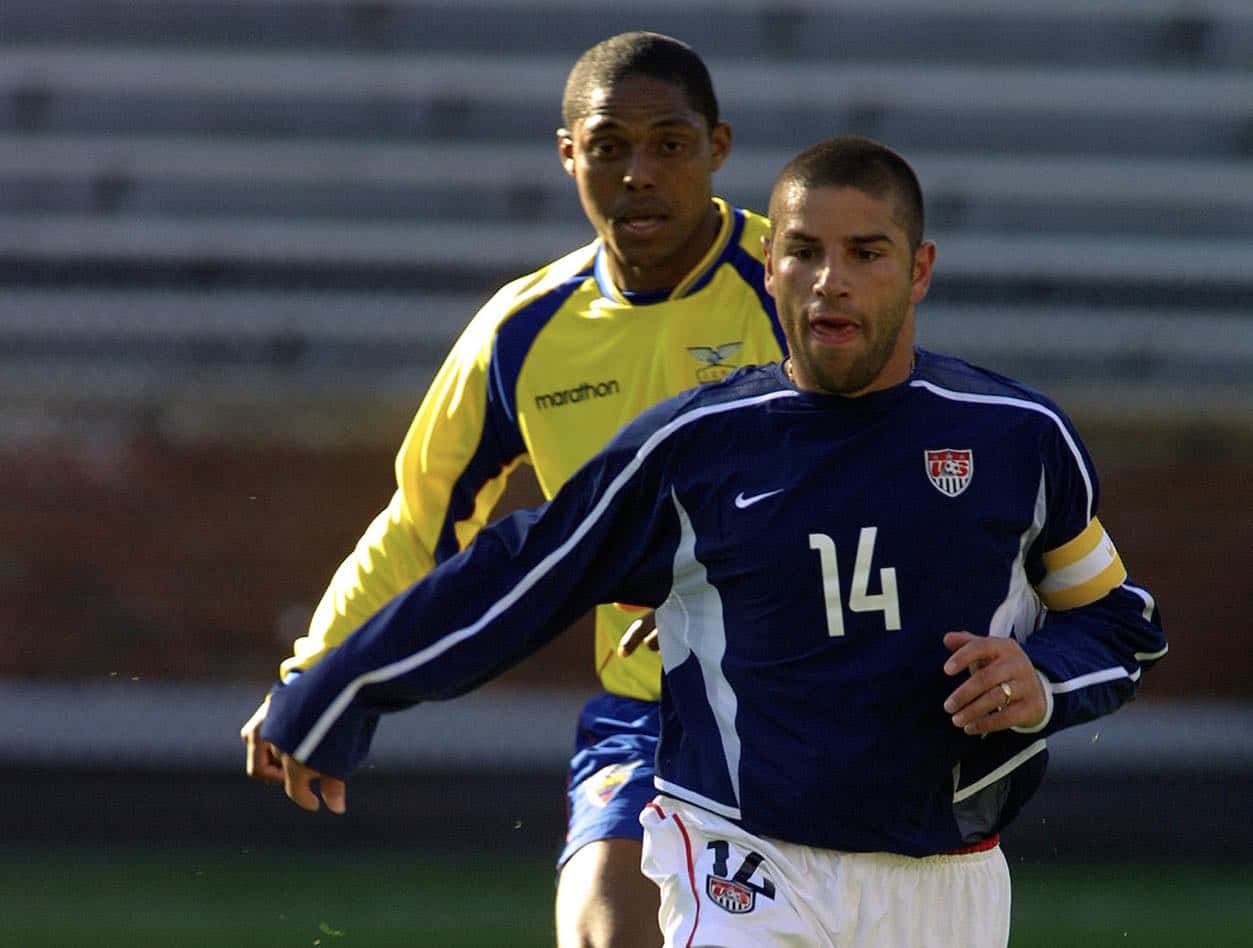 The first of four matches in which Armas wore the captain’s armband came in a 1-0 win against Ecuador on March 10, 2002 in Birmingham, Ala.

"I also was able to play really simple. I was an easy guy to play with. Cruyff said that football is a simple game, but playing simple soccer is the hardest thing in the world to do."

There were other factors - pride and never ever letting your teammates down. Armas remembered when LA Galaxy head coach Lothar Osiander and Bradley, both former USMNT coaches, told him his responsibilities in front of his teammates.

"Chris, this is your job on the day. This is the task," Armas remembered. "When that was said in front of my teammates, no way am I letting you down. I'm taking that really personal. This is not about Chris Armas. This is about my teammates, not letting them down."

Winning and earning the respect of his teammates took priority over making headlines or what the fans and media said.

"Every time I stepped onto the field. It was trying to do the best I possibly could. It was just so much being a reliable teammate, someone could be counted on,” he said

Armas' worth skyrocketed to new heights then as there was serious talk of him joining the USMNT. But there was that Puerto Rican obstacle.

"It almost cost me a chance to play for the U.S., but at that time I made a decision based on what was reality," Armas said. "I was in the middle of a college career where there was essentially no pro league, not even the USISL. So, what's the pathway? What will be next? It might be college ball. and maybe that's it. Now a national team like Puerto Rico comes asking. A lot of players from the New York area would play on that national team. You only needed a U.S. passport. My mother was Puerto Rican, so it was a nice fit. There is going to be familiarity there with guys I knew, a coach that I knew. International competition. Definitely the next level."

After that was remedied, Armas became a key member of the squad that qualified for the 2002 and 2006 World Cups, captaining the side on four different occasions during those cycles.

His most memorable moment? When the USA qualified for Korea/Japan via a 2-1 victory over Jamaica on Oct. 7, 2001, 26 days after the Sept. 11 tragedy. Armas, the 2000 U.S. Soccer Male Player of the Year, celebrated with his teammates at one end of Foxboro Stadium.

"It was such a sense of accomplishment that I couldn't share those feelings with anyone at that moment," he said, remembering when someone from U.S. Soccer yelled out the results that meant the U.S. qualified. "We're going to the World Cup!' I could have broken down right there."

The soccer gods, however, had other plans for Armas. Twice he was selected to perform in the most prestigious competitions and both times he was denied by knee injuries -- as an overage player for the Sydney Olympics in 2000 and for the 2002 FIFA World Cup. In contention for a 2006 roster spot, another untimely knee injury denied him.

"It's probably the three or four times of my career that hit me hard," Armas said. "Sometimes you realize life isn't fair. It doesn't always go your way.

"When I got hurt before the Olympics, that one hurt because the Olympics, it's always the pinnacle. To go and represent your country in the Olympics and what it meant for me and my mom and dad, my family would have been incredible.”

That potential Olympic appearance was earned on the back of being a fixture with the senior team over the previous two years. He would go on to appear in 14 of 16 qualifiers for the 2002 FIFA World Cup, and was named to the final roster until an ill-timed ACL injury struck in the team’s first warm-up match against Uruguay on May 12, 2002 in Washington, D.C. 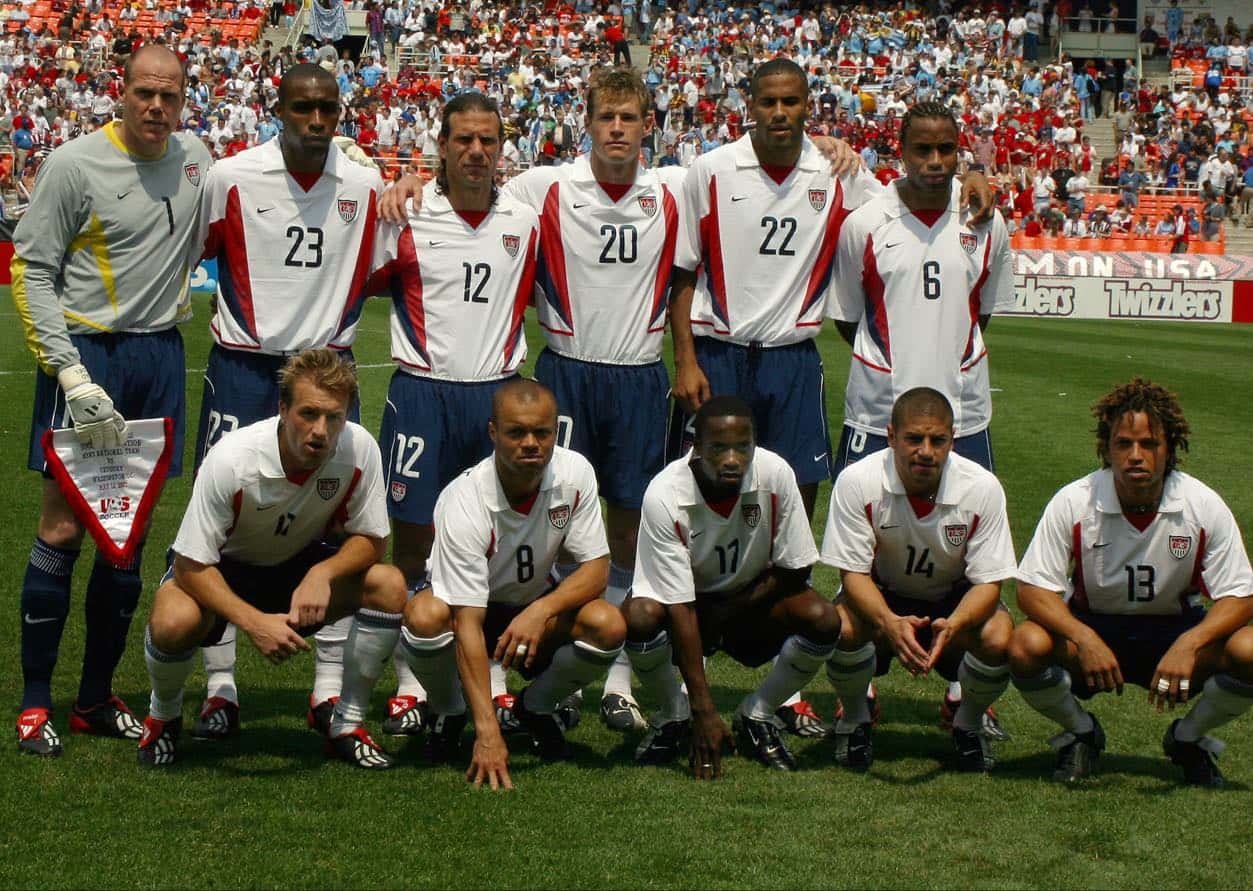 “In a send-off game to get hurt in the 11th hour when I’m a fixture on the team, that one was tough because the dream was almost recognized."

After recovering from the right ACL tear, Armas returned to be a steady contributor to the USMNT leading up to the 2006 FIFA World Cup. Once again, he started in the USA’s qualifying clincher – a 2-0 win against Mexico on Sept. 3, 2005. 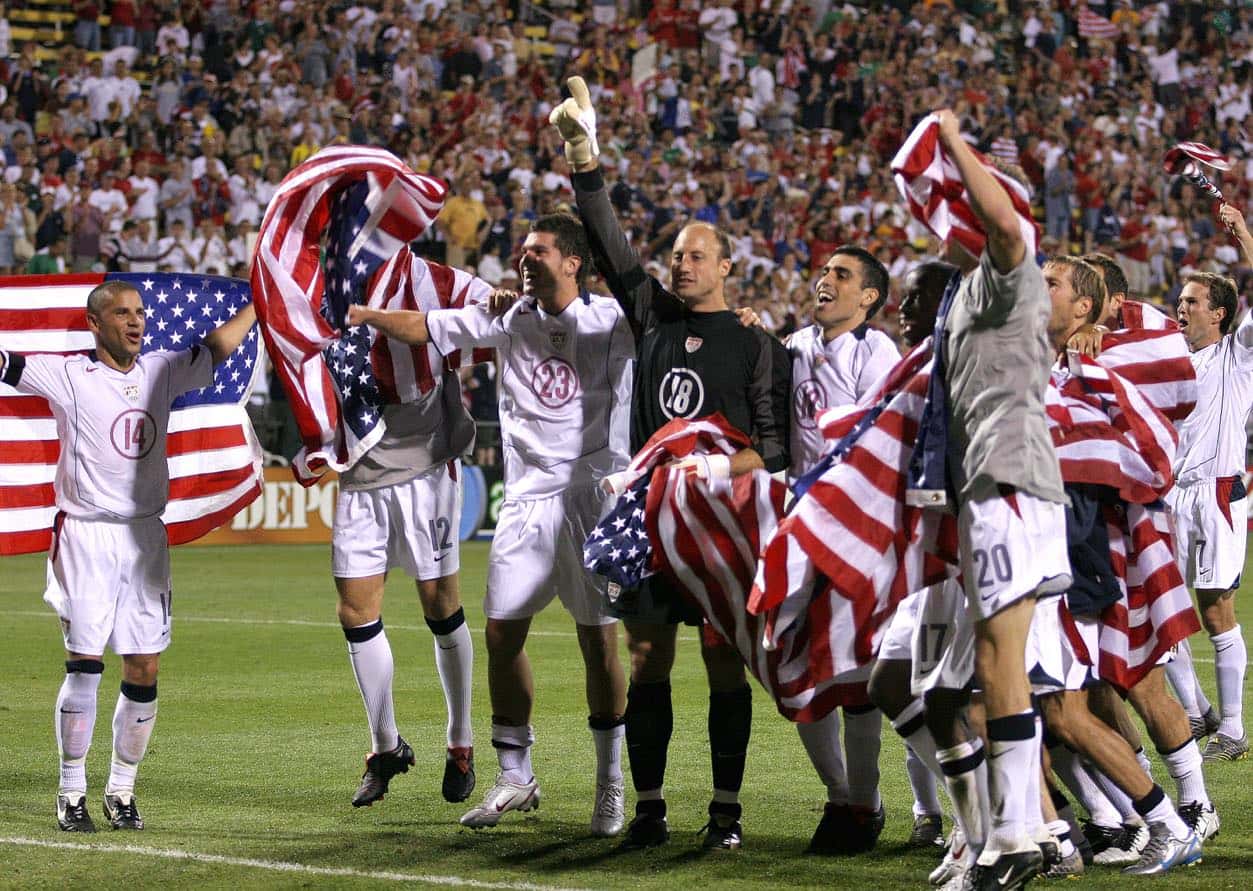 Armas (left) celebrates with his U.S. teammates after clinching qualification for the 2006 FIFA World Cup with a 2-0 win against Mexico on Sept. 3, 2005 in Columbus, Ohio

Back in the picture for a World Cup roster spot, Armas’ bid effectively ended two months later, when he tore the ACL in his left knee during an MLS Cup Playoff match against D.C. United.

While he tried to get back in time for the tournament, the midfielder only made his return to play on April 30, 2006. Arena named his 23-man roster two days later. Though the 33-year-old was named as one of 13 alternates, he never played for the USA again.

With 66 appearances to his name, the unfortunate circumstances leave Armas as the USMNT’s most-capped player without going to a FIFA World Cup.

Armas was disappointed but had no regrets.

"Those times were difficult," he said. "I didn't harp on those at all. I always came back stronger. Those experiences didn't define me. I really find real joy in thinking back to all the experiences I was a part of that were incredible. I would have signed up for these. I would have taken those injuries if I knew I would experience all the joy and those incredible experiences around those teams, qualifying and helping that team along and just testing myself at the highest level, with the best and against the best."