What We Learned from The U.S. Soccer Podcast: Episode 2 with Brian McBride

The second installment of “The U.S. Soccer Podcast” featured USMNT General Manager Brian McBride sitting down with hosts Jordan Angeli and Charlie Davies to tell tales of his legendary career with the red, white and blue and discuss his first few months on the job.

Here’s some of what we learned from the interview:

Germany has become a haven for young American players and McBride launched his own professional career with Wolfsburg at age 22 in 1994. McBride was the first of eight USMNT players to represent the club, and while things didn’t work out for him in Germany, he explained the move served as a critical part of his development.

“It was the biggest adjustment of my life,” McBride said. “It really clarified things for me. I wasn’t mentally tough enough to make that transition… As much as I wanted to be a professional soccer player, I needed to grow up and I needed to figure out the mental side and the toughness of that.”

May those golden locks continue to flow for many more years 🎂🎂pic.twitter.com/yovSBtEHEq


McBride said he spent his time in Wolfsburg focusing on his craft, living in the back of an older woman’s house and devoting his time to the training ground and gym.

McBride returned stateside after the season and less than a year later was selected first overall in the inaugural MLS Draft by the Columbus Crew.


BONUS: There’s a great story about how he found out that was happening in the episode!

In the late 1980s and early 1990s, U.S. Soccer ran a “B” Men’s National Team made up mostly of amateur players who were prospects for the senior team.  While McBride became a regular with that group, he earned his first call-up to the full team in March 1993. The training camp featured matches in the hostile environs of El Salvador and Honduras. Warming up on the sideline in El Salvador, he asked veteran Cobi Jones why the home fans were tossing bags of water onto the field.

“Cobi goes, ‘That’s not water.’… It added a new dimension to warm-ups.”

Despite coaching the team on March 25 vs. Honduras, MNT head coach Bora Milutinovic wasn’t on hand to see McBride take the field for the first time. He left at halftime for an appearance in New York. Instead, then assistant coach and future USMNT manager Steve Sampson technically made the substitution that gave the young forward his first cap.

Having drawn a difficult group featuring European power Portugal, hosts Korea Republic and Poland for the 2002 FIFA World Cup, the USA knew it would have work to do if it were to make it out of the group. Yet McBride remembered the confidence that then head coach Bruce Arena bestowed upon the team from that moment forward.

“From then on, Bruce would start every team meeting by saying, ‘We’re gonna beat Portugal.”

Despite initial doubts, the squad started to believe the mantra as the tournament drew closer. McBride would play a key role in the USA’s opening 3-2 upset victory versus A Seleção, heading home the team’s third goal off an assist from Tony Sanneh, in a play that the two former Milwaukee Rampage teammates honed during their season together in the A-League in 1994. 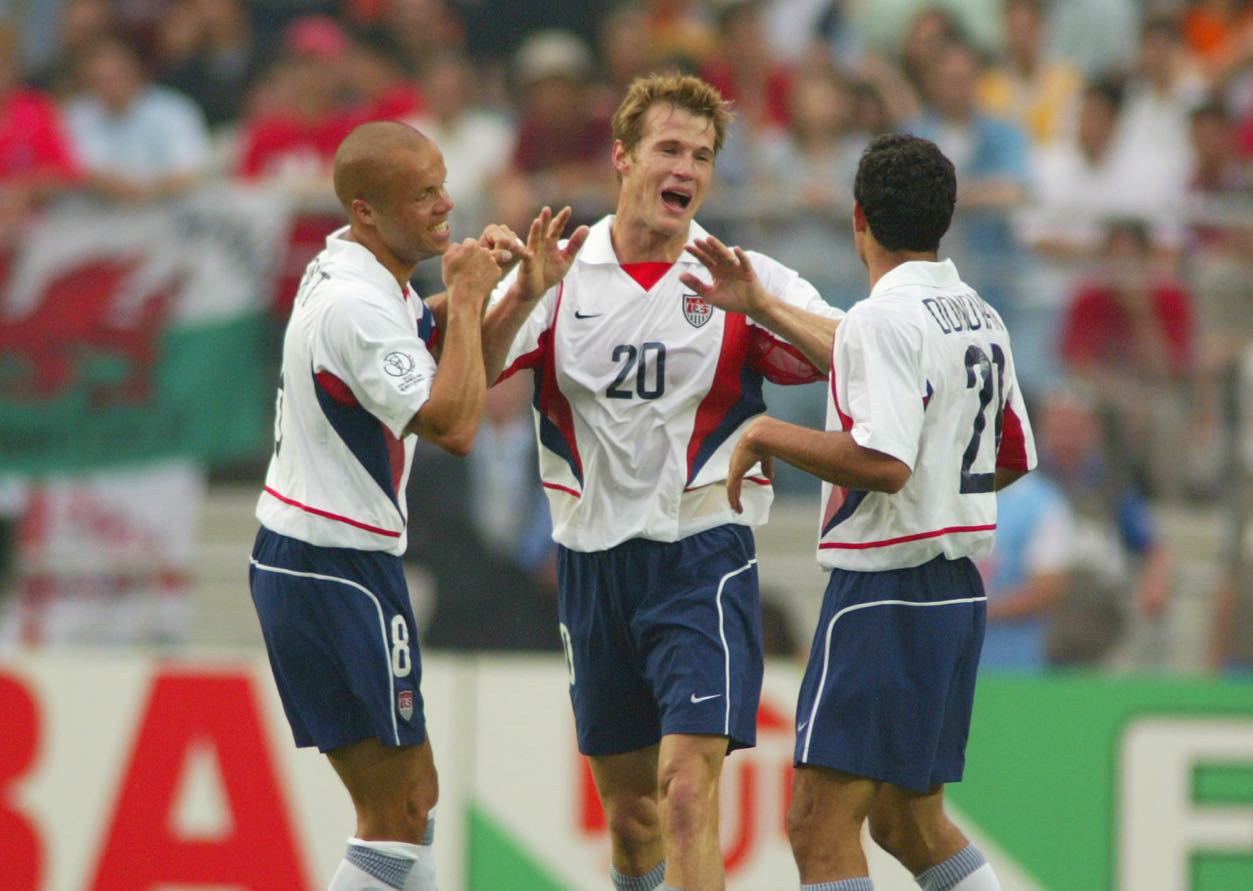 “When Tony got that ball, I knew exactly the kind of run I needed to make. Tony puts a perfect ball in,” McBride said. “(There’s) the slow motion of just knowing it’s happening -- I get the chills just thinking about it -- understanding I’ve set up everything up correctly, a ball has just been placed on top of my head perfectly to put it away. I didn’t need to stand and create the power, Tony put a ton of pace on the ball. It was just meeting it at the right time.”

McBride then explained that he popped up in celebration, staring and shouting at his wife and young daughter in the stands.

As a forward, McBride faced off against a litany of lockdown defenders during his legendary career, but said because of the way he played as a target striker, longtime Liverpool center back Jamie Carragher was the best he ever came up against.

“I’d win most of the head balls, but he would make sure that I knew that he was there,” McBride said. “That part of it was always there. I couldn’t lose him, I couldn’t drift off his shoulder, he always knew where I was. Pace-wise, we were similar, so there wasn’t any real advantage or disadvantage there because he was so good at really seeing the player.”

The biggest sticking point from McBride’s duels with the defender? That Carragher scored on McBride while he was his assigned mark during a 2006 match between Liverpool and Fulham.


WEARING THE ARMBAND IN BEIJING

After retiring from the USMNT following the 2006 FIFA World Cup, McBride made a brief come back to the international game two years later to join the Under-23 MNT as an overage player at the 2008 Olympics in Beijing. The squad featured six future USMNT World Cup players, including Jozy Altidore and Michael Bradley.

“It was just such a special experience,” McBride said. “It was a special group. You had a lot of guys that were not only talented, but you had different characters. Guys that really have the difference of making a really long career of their games.”

Bradley served as the squad’s captain for most of the cycle, so when head coach Peter Novak asked McBride to wear the armband in China, he spoke to Bradley first.

“Certainly, I didn’t want to interfere… they had a great dynamic,” McBride said. “I talked to Michael and said, ‘This is your team, I don’t want to step over anything.’ Michael said to me, ‘Don’t you do that, if he wants you to be the leader, you can be the leader. Please keep the armband.’ 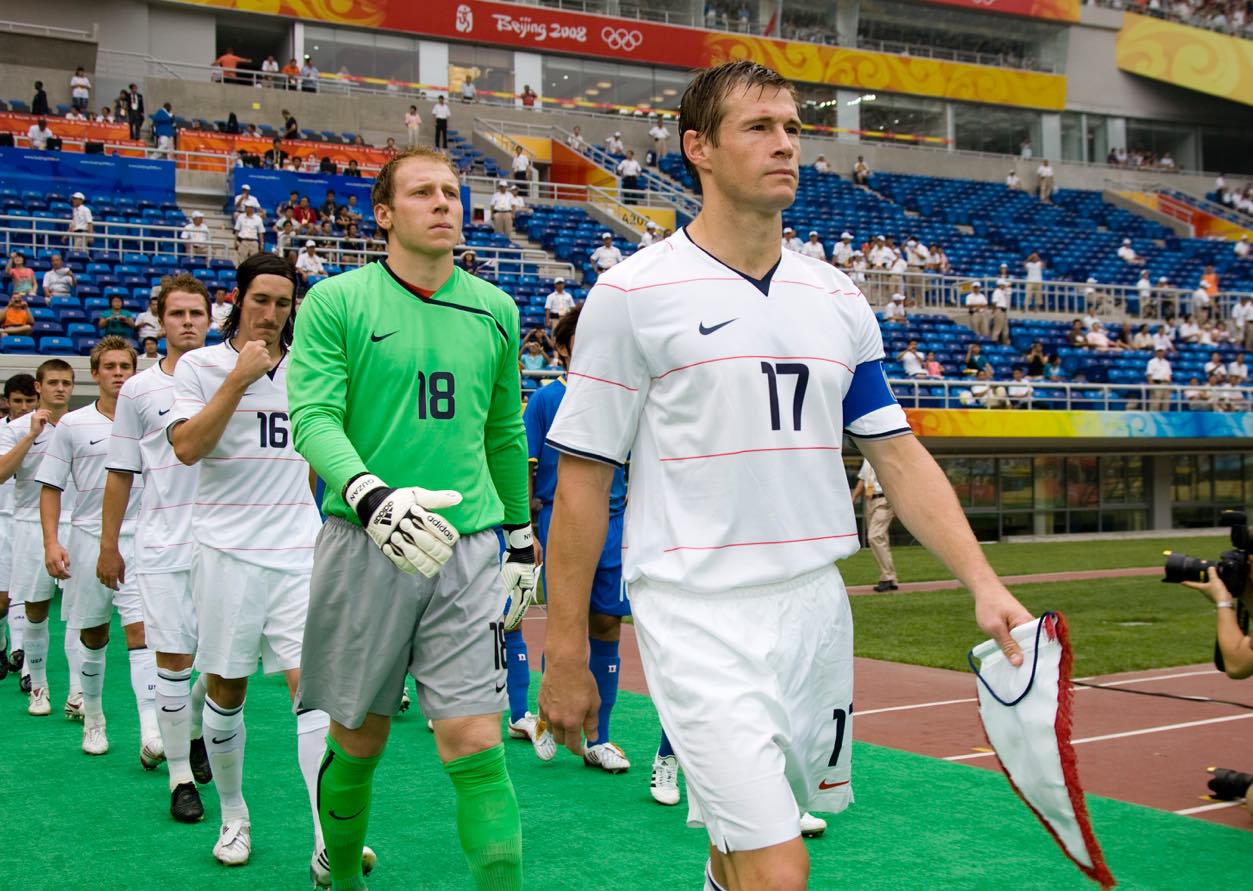 “it was a good group, and a group that had not only character, but had togetherness and a unity that was evident very early on.”

Of course, another of McBride’s teammates on the 2008 squad was podcast host Charlie Davies, with the two commiserating on just how close Davies came to sending the USA through to the knockout round…


Listen to the full episode here, and stay tuned as a new podcast drops every Friday.