What We Learned From the U.S. Soccer Podcasts Episode 3 with FIFA Referee Katja Koroleva

In the latest episode of “The U.S. Soccer Podcast,” our hosts Jordan Angeli and Charlie Davies caught up with Katja Koroleva, a person U.S. Soccer knows well as a highly respected FIFA Referee but is also a Physician Assistant in her everyday life. Koroleva shed light on her work both on the pitch and in the emergency department of a hospital in San Jose, Calif.

Here are a few things we learned from the conversation:


BEST OF BOTH WORLDS

The daughter of a researcher, science has always been in Koroleva’s blood and the career of Physician Assistant allowed her to pursue her passion for medicine while staying involved in soccer at the highest levels.

And while the vocations might appear quite different at the outset, the Koroleva has found many similarities between overseeing 22 elite athletes on the pitch and her work in emergency medicine.

“They’re high-paced environments,” said Koroleva “You have to make frequent decisions that take into account all the external factors for players or for patients, and then make the best outcome for patients or for players to have a positive experience. Communication is certainly transferable between the two fields. The patients rely on us and earning their credibility is huge.”

Concacaf referee Ekaterina Koroleva is on the frontlines against COVID-19 ❤️

“The biggest thing is that no two days are alike. That correlates exactly to the experience we have on the field.”

Just like the world-class players she shares the field with on match day, Koroleva dedicates hours upon hours to preparing both physically and tactically. Referee coaches and sport scientists prescribe weekly regimens of sprint, agility and endurance work to build and maintain fitness, while also considering factors like travel and recovery.

“Believe it or not, it’s very similar to what the players go through,” said Koroleva. “But we do have one key advantage. We don’t have to have the ball at our feet.”

Along building the speed and stamina to cover the field and track down counterattacks, referees also pour over film and break down tactics to aide their on-field positioning.

“We study film. We’ll also look at player tendencies to occupy space during a match so we can stay out of passing lanes,” Koroleva explained. “On counterattacks, we’re on our horse flying up the field, but with teams like Barcelona who like to possess and have small passes around the penalty area, we really have to stay out of the way and then read when they are attempting to go inside or have a scoring opportunity.” 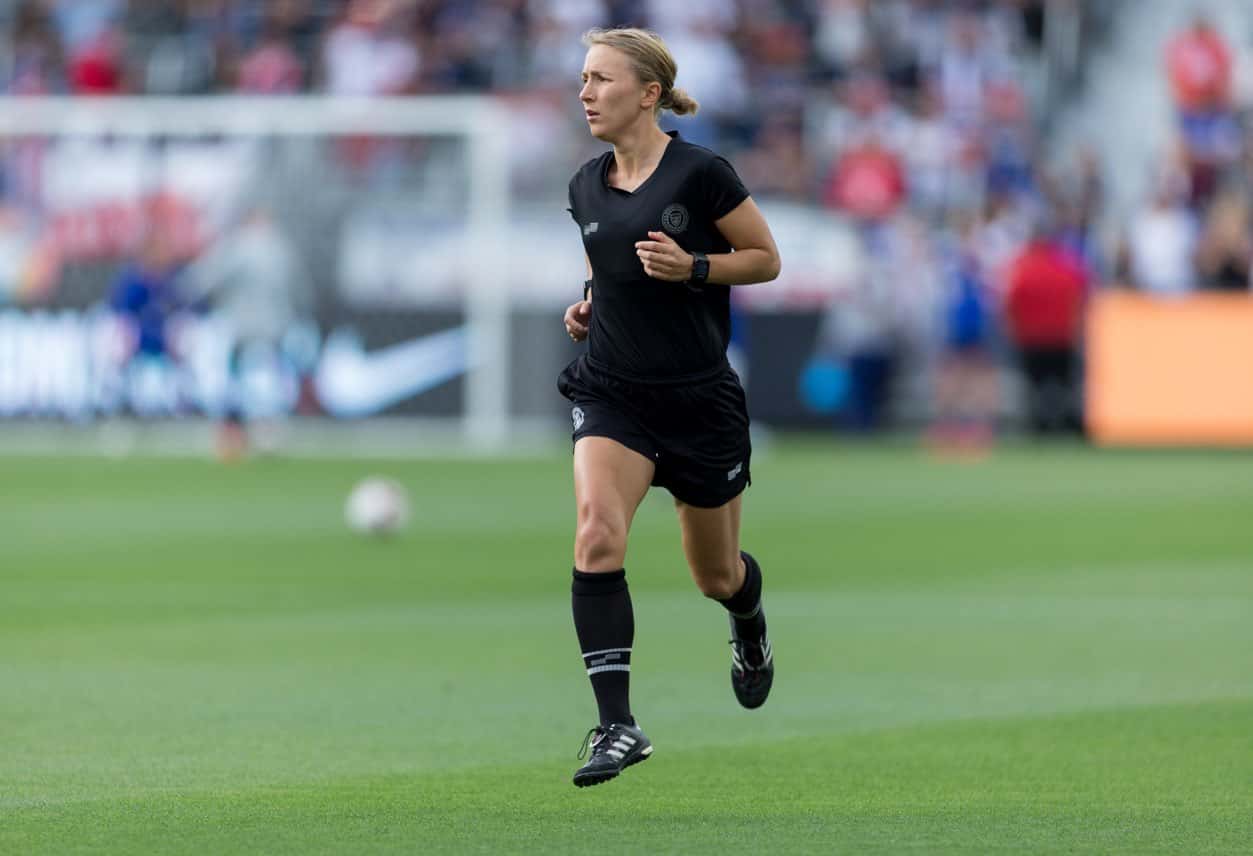 The biggest matches feature heightened emotions on the field and in the stands, with supporters quick to vocalize their thoughts on every decision. How do referees handle the spotlight, noise and pressure?

“I think it’s exciting,” said Koroleva. “It’s part of the sport. You learn to tune it out but at the same time it kind of brings your focus to a higher level. I enjoy those.”

Indeed for Koroleva, the tougher matches to officiate have nothing to do with the fans, but with the players themselves and trying to navigate different matchups of style and emotion.

“Say you’re refereeing [Brazil vs the USA],” Koroleva explained. “There are very different personalities and different cultures. Those can be challenging games.”

For many players, the combination of nerves and anticipation makes their first international cap a blur. The same was true for Koroleva in 2014 when she refereed her first match after receiving her official FIFA certification.

“I think I smiled pretty much the whole game,” she said “I don’t remember the moment really well besides it being just a big blur and being really happy. For me it was a huge life-changing moment. Finally, you’ve made it there and you’re representing your country... this shiny white badge and it feels like it weighs 10 pounds. It’s a heavy feeling when you’re running around with it at first.” 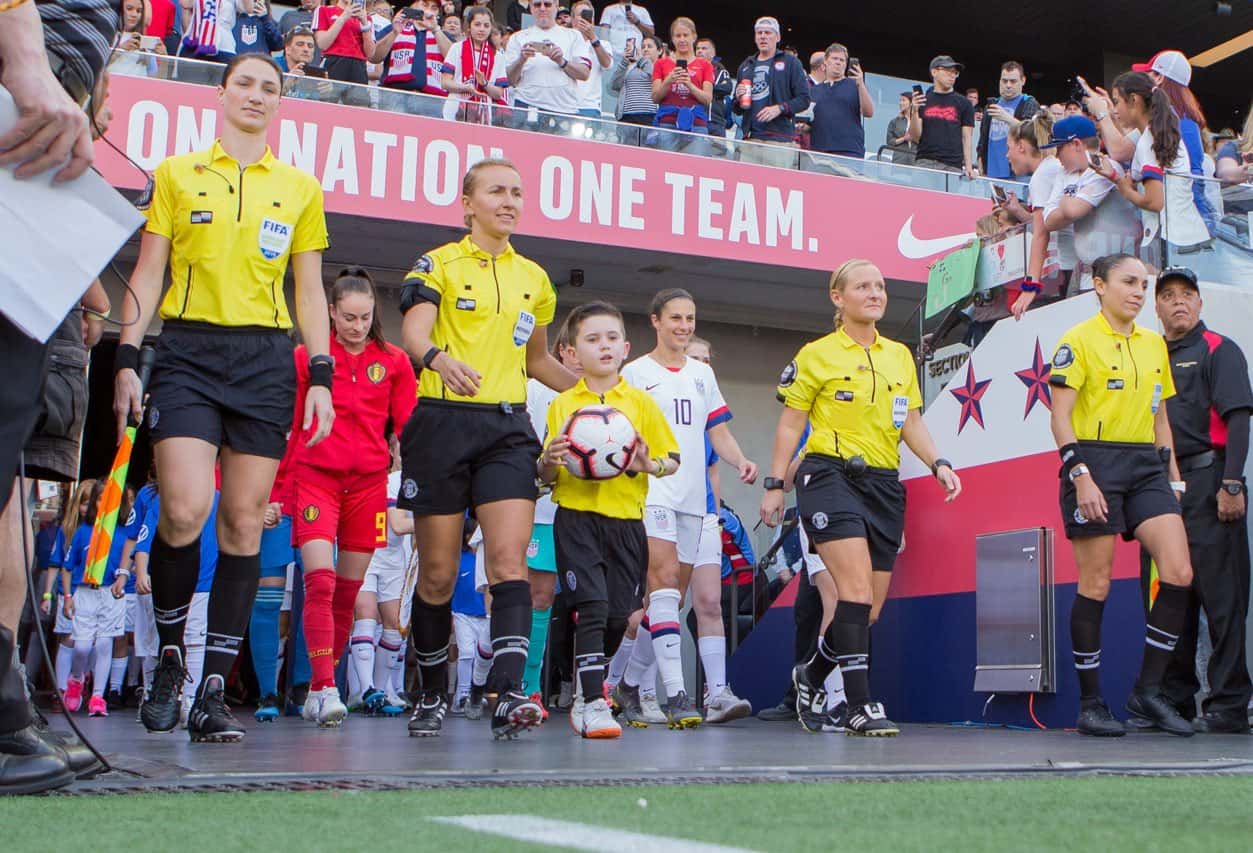 Having served as fourth official at the 2019 FIFA Women’s World Cup, Koroleva is hungry to continuing her upwards trajectory in the game.

“I want to go back to the World Cup,” said Koroleva. “I want to referee at the World Cup. But I also want to keep developing domestically and potentially referee in MLS one day.”

“Once you reach a new level, you kind of have to start over and build new goals and realize there are higher destinations to achieve. You get right back on the horse and start learning again and getting better.”

The full interview with Katja Koroleva is available online at ussoccer.com and can also be streamed or downloaded through Apple Podcasts, Spotify and other major streaming platforms.