Sara Whalen was fast, even when compared to the high standards of speed on the U.S. Women’s National Team.

She used it to become an All-American defender and forward at the University of Connecticut, leading the Huskies to the 1997 College Cup.

Whalen also deployed that speed to become a valuable member of the U.S. Team in the late 1990s, where - in perhaps her most well-known sprint – she became the first teammate to congratulate and celebrate with Brandi Chastain after the defender converted the iconic game-winning penalty kick in the 1999 Women's World Cup Final.

That moment wound up on the cover of Time Magazine. 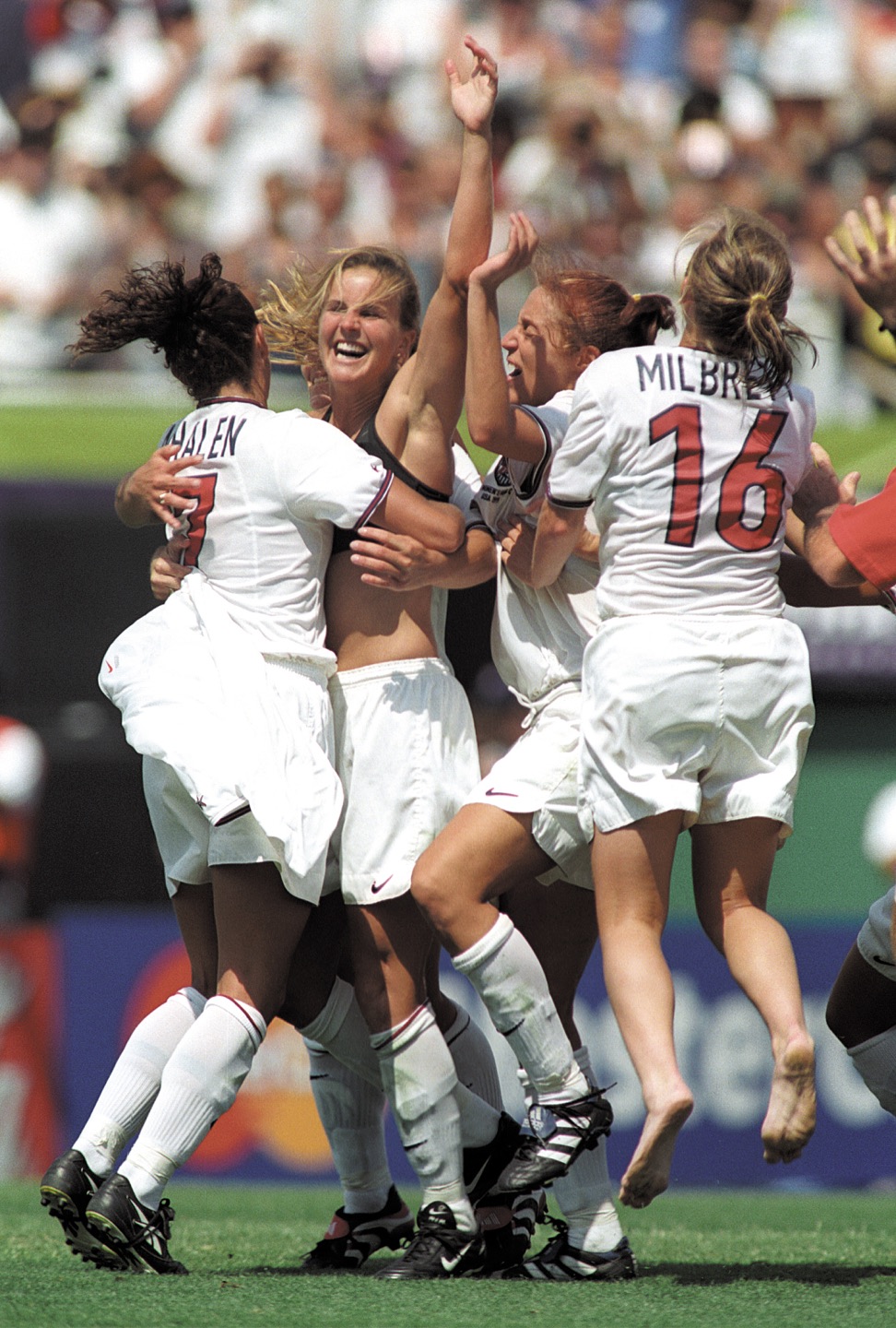 Fame, though, can be fickle and fleeting.

In 2002, at the age of 26 and in her athletic prime, Whalen not only lost her speed but – temporarily -- the ability to walk after a confounding knee injury and its painful - physically and mentally - aftermath.

While the injury would hasten the end of her soccer career, Whalen would recover and, in the process, rediscover herself in a second career. As a licensed psychologist and cognitive-behavior therapist, Whalen now combines her background as an elite athlete with a passion for psychology and personal experience rehabbing from a serious injury to help younger athletes overcome their own setbacks.

Whalen’s athletic journey dates back to her days a three-sport athlete at Harborsfields High School on Long Island, where she was a lethal goal-scorer while also competing in basketball and as a sprinter in track and field. She eventually whittled down her college options to the University of Pennsylvania, where she could pursue track, or Connecticut for soccer.

"When I chose UConn, I decided, let's blow this soccer thing out. Let's see what I can do," she said.

Whalen was also all-in academically, majoring in psychology and devouring the subject.

"I knew that was the type of field I was always very interested in, even when I was in high school," she said. "[UConn] had a pretty good school of psychology and research department, and I sought out the top professors, the hardest, the best. I wanted to be the best psychologist."

On the field, Whalen quickly established herself as a top-flight defender and was twice named the Big East Defensive Player of the Year. When UConn needed some attacking help up front, Whalen was more than up to the task, finishing her senior season with 21 goals and 22 assists while winning the Honda Sports Award as the top collegiate player in the nation.

"It didn't feel crazy new, but I hadn’t played it before," Whalen said of the transition from defender to forward. "That said, it didn't feel foreign. It felt like a little vacation. I was really successful up there because of my speed. Who's going to turn that down? I probably wasn't the most tactical attacker, but it worked."

When legendary UConn coach Len Tsantiris told Whalen that USWNT head coach Tony DiCicco wanted her to attend a training camp, she admitted she wasn't all that excited. "I didn't know what the National Team was," she admitted.

“I was completely out of my element,” she said. “I was just so nervous, intimidated, physically smaller. I wasn't strong. I spent the whole camp just circling around being like 'What am I doing here? I just want to go home.’"

DiCicco gave her encouragement and tips about getting fit and stronger. Returning to UConn, Whalen was a motivated woman, immersing herself on a self-improvement routine. "I had this total fire because I now knew there was a potential of that happening," she said. "That's where I started to kick it into gear. I need to get fitter, faster, stronger, smarter, the whole deal. I need to get back there." 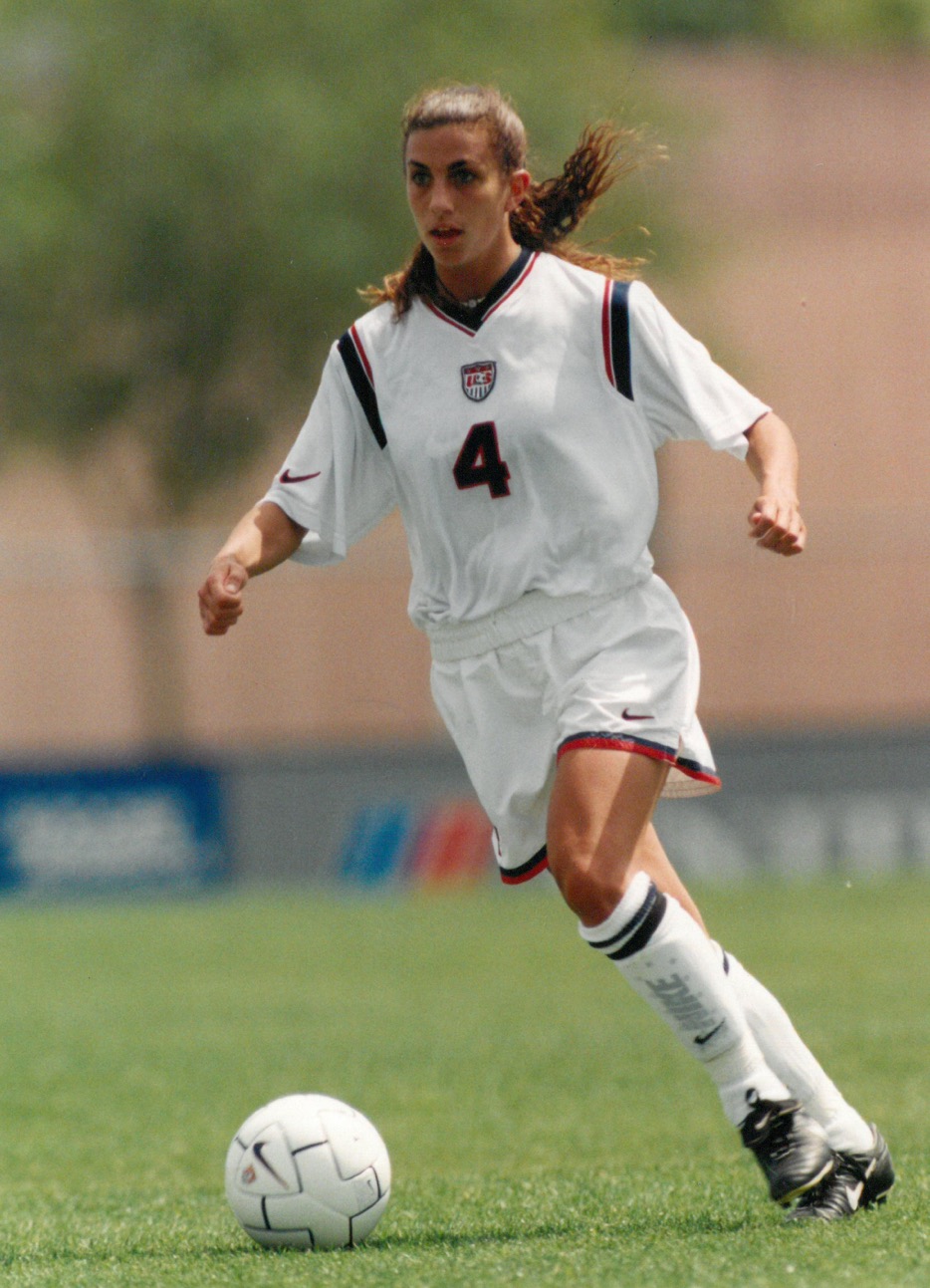 This time Whalen stuck and earned a spot on the 1999 team that was destined to win the historic FIFA Women’s World Cup.

A still world-record 90,185 spectators packed into the Rose Bowl to watch the USA take on China PR in the World Cup Final, where Whalen replaced an exhausted Michelle Akers in the 91st minute, going in at right back.

"Michelle and I joke about it now,” Whalen said. “We always hang out when we do these soccer things and I'm like, 'I’m really sorry I got to play in that game because you got hurt, but it really changed my life.’”

Still scoreless after extra time, the match went to penalty kicks. Whalen was ninth in the shootout pecking order and she was not looking forward to taking one. "We really wanted to win, but more than that, I did not want to have to shoot," she said. "We literally were throwing up in our mouths just watching.” 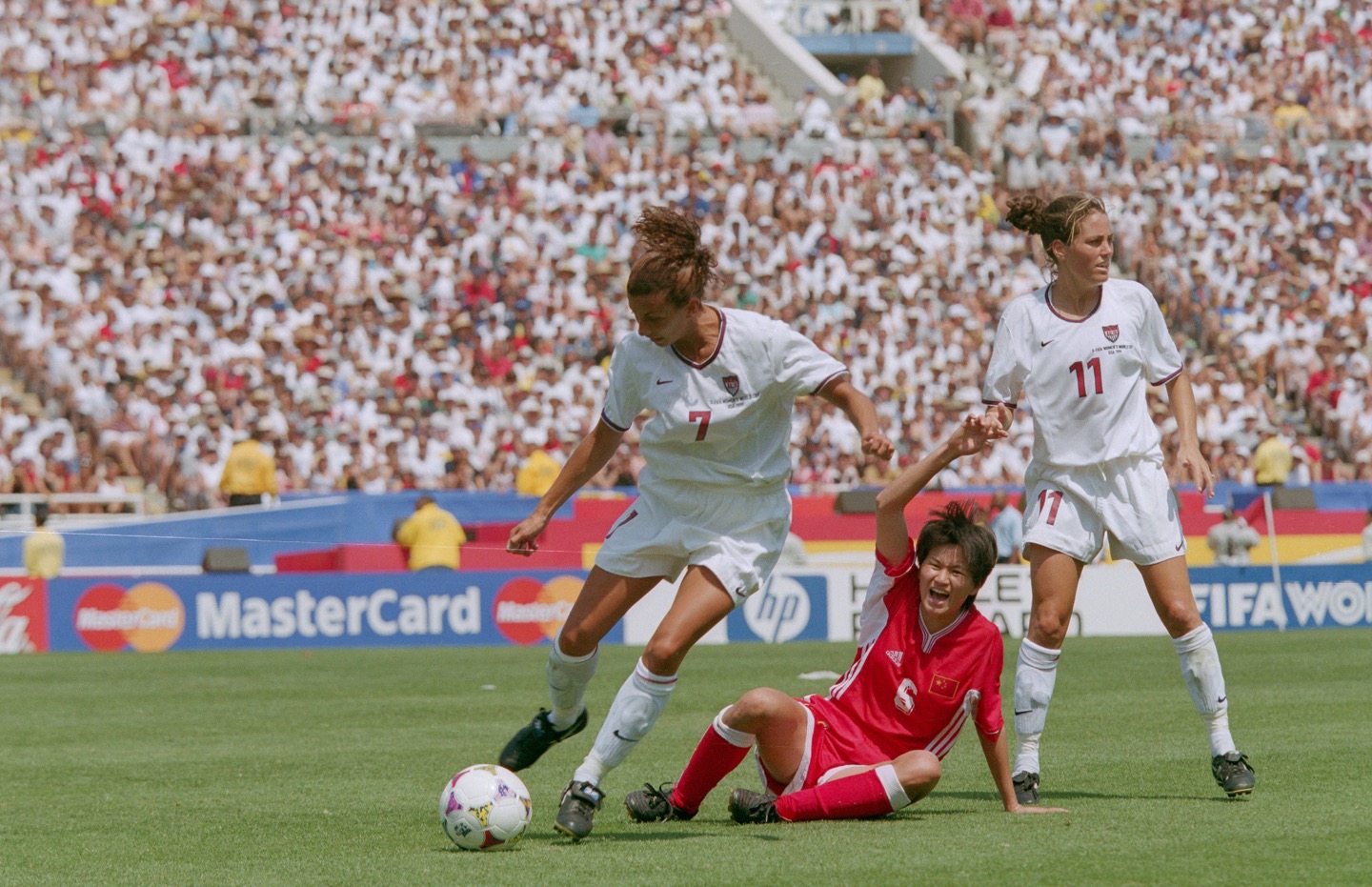 Whatever nervousness Whalen had washed away in a torrent of happy emotions when Brandi Chastain, the USA’s fifth shooter, fired her shot past goalkeeper Gao Hong for the trophy-clinching penalty. Whalen bolted toward her teammate and won the race between all her teammates, those coming from the midfield stripe and from the sideline, congratulating and celebrating with Chastain. That special moment not only wound up on the cover of Time, but also publications across the country.

"That was lucky," Whalen said. "Another perk of speed. I just got there first."

Whalen, who scored seven goals in 65 international appearances for the USWNT, became an instant celebrity when she returned home and was quickly signed by the W-League’s Long Island Lady Riders for the remainder of the season. Fueled by the success of the 1999 World Cup, the Women's United Soccer Association (WUSA) kicked off its inaugural season in 2001 with Whalen starring for the New York Power.

"Our only job that day was to wake up, go to practice for two hours, go get lunch and then we'd find people to hang out with because we all lived in the city in Manhattan," she said. "What a life that we could do that and that would be our only job." 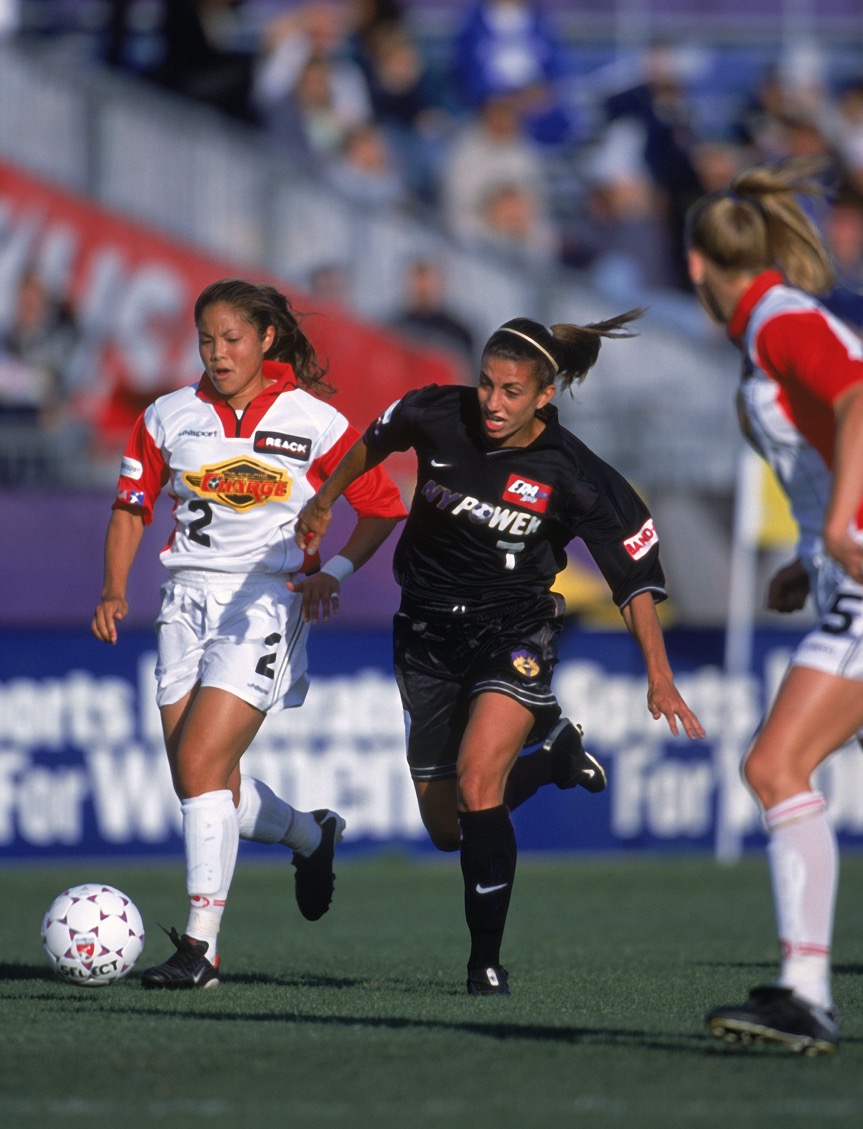 If 2001 was a dream come true, the next year became a nightmare. During the WUSA All-Star Classic in Fort Lauderdale in February, Whalen suffered a fractured rib and punctured lung in a collision with her USWNT teammate Shannon MacMillan.

She returned to the Power but soon tore her ACL and MCL in a collision with German star Birgit Prinz.

"I still felt tough mentally," Whalen said. "I'll fix this, and I’ll go back to the top."

While recuperating, an infection from the surgery made Whalen deathly sick.

"That's when the mentality started changing," she said. "When I had a physical injury, I knew what it was, and I could identify it and fix it. But when I was sick and I couldn't get better, it was just so depressing. There was something about not being able to identify the problem and feeling so terrible at the same time [that] was just chipping away at any hopefulness."

Doctors had to remove anything that had been inserted in her knee that led to the infection. Whalen faced the reality that her soccer career was over.

"It wasn't as simple as you push yourself and you figure out what's next," she said. "I was not in a positive place at all. I had eating disorders. I was really depressed. I lost tons of weight just because I was so depressed. How do you get through it? You've got great support. It’s not like I was mentally tough at that point at all. That's why support helps."

Whalen climbed out of that hole thanks to a support group that included family, her fiancé and now husband, Jon Hess - a former NCAA lacrosse champion at Princeton - and former teammates.

When she was recuperating in Greenlawn, N.Y., Whalen had a catheter inserted into her arm and walked around with a pole and an IV bag. "I couldn't go in the car. I couldn't do anything," she said.

"They borrowed somebody's car - a fast car, like a sports car – and drove out from the city, just to drive me around for a half hour between medicine,” she said. “That's a four-hour thing for them just to do that. That's the kind of support people need.."

Whalen continued her recovery and attended Fordham University to pursue her master’s in psychology as Hess drove her to and from the Bronx for night classes. She was in a knee brace and needed crutches to get around.

She also rediscovered her confidence and motivation and began training for the 2004 New York Marathon.

"Every time I started to run, which was a passion of mine, my legs would fall apart," Whalen said. "They would swell, and it would be super painful, and the PT people would be like, 'OK, you might not run any more. Start walking. You can swim.' That's devastating. Oh my God, I'm like 25 and I'm basically crippled. So, I figured there was nothing to lose. I was pushing to see what would happen. That was kind of my mojo. If I can run for a minute, I can run for three. If I can run for three, I can probably run for eight. The training gave me purpose."

The pushing paid off and she eventually ran the marathon in four hours, 19 minutes and 38 seconds.

"That was awesome, but hard," she said. 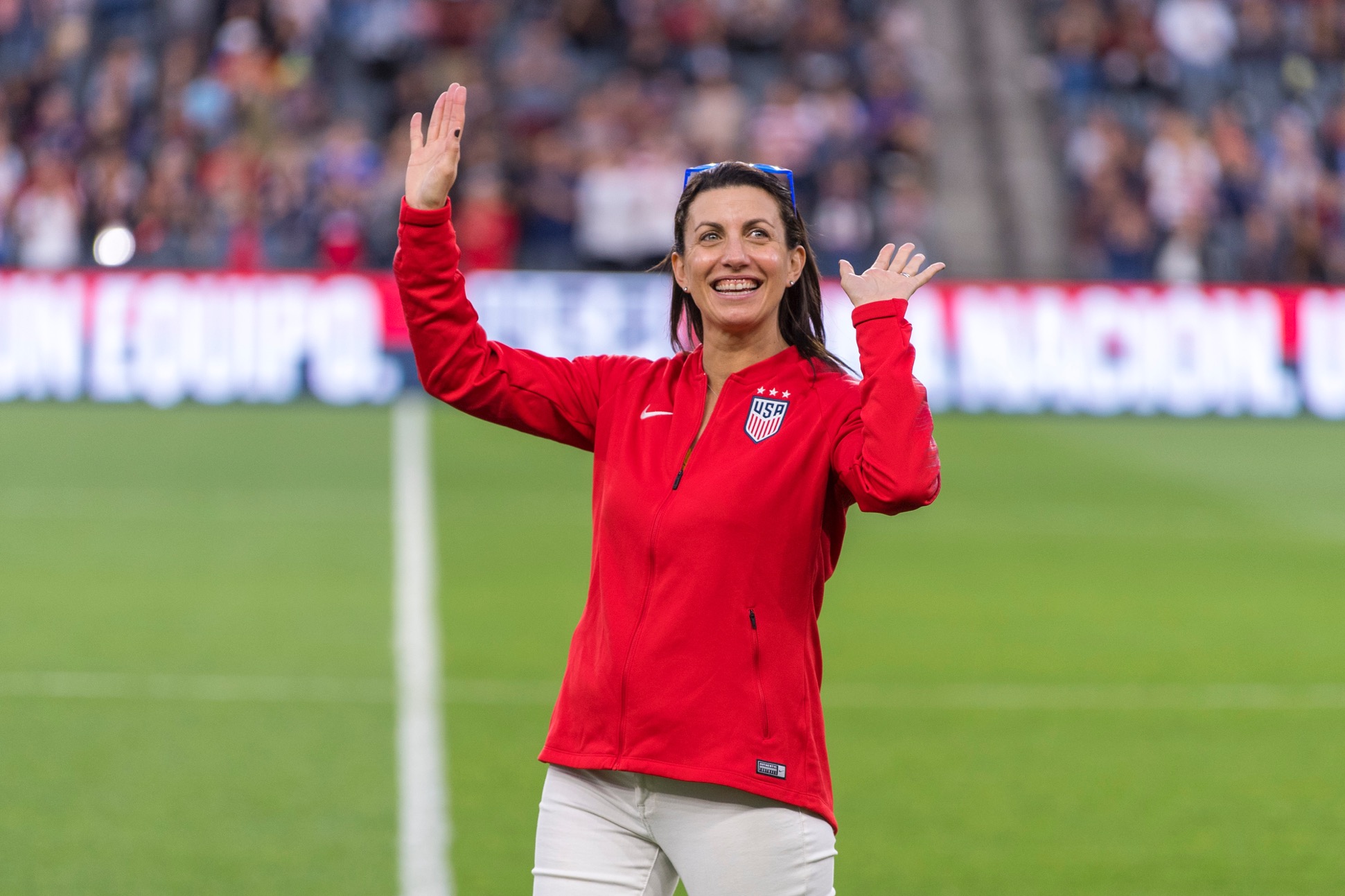 Whalen, who goes by Sara Hess now, earned her doctorate in psychology from Fairleigh Dickinson University, and lives with Jon and their three children in Rye, N.Y., where she has set up private practice.

While her current work doesn’t require the same physical speed of her playing days, patience and perseverance remain a common thread.

"It can be really fun, and it can be really painful, and it can be very stressful," Whalen said of her work. "I am doing it because I feel like I can do a really good job for people in a field where there is very little accountability. I really like to be out there educating people about advocating for themselves and educating them about their options. I don't like people being taking advantage of. I started this because I wanted to help kids who suffer from anxiety, depression or sport-related perfectionism because I know what that feels like."

"I still can see my typical patients, but also gear towards athletes and student-athletes because there is a big disconnect. When students get hurt they get physical help, but they don't get any mental help for that,” she said.

"Being a shrink can be isolating and I wanted to change that up. Now I can work with a group, which I think will be really fun. We can collaborate more. Now I have a team rather than just be by myself. So I’m excited."

Whalen is on to the next challenge, full speed ahead.