Under 18 Caps: Gio Reyna and Yunus Musah Could Earn USMNT Appearances Before Adulthood

While most kids under the age of 18  are thinking about graduating high school, the two youngest USMNT newcomers Gio Reyna and Yunus Musah are pondering a different milestone - making their international debut for the U.S. Men’s National Team.

Their first opportunity to walk across that stage comes against Wales in Swansea on Thursday at 2:45 p.m. ET (FS1, UniMás & TUDN), and then four days later when the USA faces Panama in Wiener Neustadt, Austria in the second match of the November FIFA window on Nov. 16 (2:45 p.m. ET; FS1, UniMás & TUDN).

They hope to follow in the footsteps of players who worn the Red, White and Blue prior to their 18th birthday, and reminder – Gio turns 18 the day after the match in Wales…

With that, here are the 11 known players who have played for the USMNT before adulthood:

Poli Garcia made his international debut at 17, 225 days, two years before turning pro. Garcia, born in San Diego, lived most of his early years in Mexico before his family returned to California when he was 15. He played the full 90 minutes in a 6-0 friendly loss to Argentina in Mexico City on Aug. 21, 1975. Four days later in the same city, he came on as a substitute in a 2-0 defeat to Mexico.

He replaced Charlie Raphael at halftime, the first of two senior international appearances. During his high school career, Snow scored in 49 consecutive matches, finishing with 92 goals. He played only one season for Indiana University (1989), finishing as the NCAA Division I postseason leading scorer as the Hoosiers were eliminated by Santa Clara in the semifinals.

Snow helped the USA qualify for the 1992 Olympics, scoring 11 times in nine matches before playing twice in the Barcelona Games. He decided to pursue a professional career in Belgium, first with Standard Liege, then FC Boom from 1990-93. Snow returned to the states to play for the Chicago Power (National Professional Soccer League) before retiring in 1995 due to recurring knee injuries.

Mark Jonas represented the USA for his first and only time in a 1-0 friendly victory against Jamaica in High Point, N.C. on Sept. 14, 1991, while he was attending Bowie High School in Bowie, Md. Jonas, who was 16 years, 332 days at the time, was one of three players under the age of 18 who made their international debuts in that game, joining Mike Sliviniski and Nelson Vargas. It was the only time three players under 18 made USMNT appearances in the same match. The midfielder replaced goal-scorer Sadri Gjonbalaj at halftime.

As one of three under 18 players who played in the 1-0 win against Jamaica in High Point on Sept. 14, 1991, N.C., Mike Sliviniski started the game before he was replaced at halftime by Nelson Vargas, becoming the youngest player at the time to debut for the USMNT at 16 years, 318 days. Two other players under the age of18 players also played that day - Mark Jonas and Vargas, the only time it has been accomplished. All three players had just come off representing the United States at the 1991 U-17 World Cup in Italy the month before.

After a standout career at Scott Gallagher SC in St. Louis, the midfielder played at the University of Virginia under former U.S. head coach Bruce Arena for most of his college career, joining the coach at D.C. United where he played  three seasons. He also performed for MLS Pro-40, Hampton Road Mariners, Northern Virginia Royals (all United Soccer League), Maryland Mania and Milwaukee Rampage (both A-League) and San Diego Flash (National Premier Soccer League) before retiring in 2001.

Before playing five seasons in Major League Soccer with the Tampa Bay Mutiny and Miami Fusion from 1996-2000, Nelson Vargas debuted with the USMNT in the 1-0 friendly win against Jamaica on Sept. 14, 1991. Vargas (17 years, 49 days) was one of three members of the U.S. team to play at the 1991 FIFA U-17 World Cup in Italy the month prior and along with Jonas and Slivinski, joined the senior side for the match in North Carolina, replacing the former at halftime.

Returning to the side at the end of 1994, Vargas played a total of four times for the senior team. He also represented the country at the 1993 FIFA U-20 World Cup.

An interesting note: Vargas played the role of USMNT legend John "Clarkie" Souza in the movie “The Game of Their Lives,” which chronicled the USA's historic 1-0 upset of England at the 1950 World Cup.

Maurice Ligeon (17 years, 49 days) made his first and only appearance for the USA in a 2-1 defeat in Saudi Arabia on Oct. 19, 1994, replacing Lawrence Lozzano in the 72nd minute. The match was also the debut for current USMNT head coach Gregg Berhalter.

The midfielder went on to play for Club Brugge (Belgium), SC Telstar, SV Huizen and KSJB (all the Netherlands) in a pro career that spanned 15 years from 1993 to 2007.

Ligeon was head coach at Almere FC from 2012 to 2017 while taking up similar duties with Unique Lelystad from 2018-19. Both clubs are based in the Netherlands. 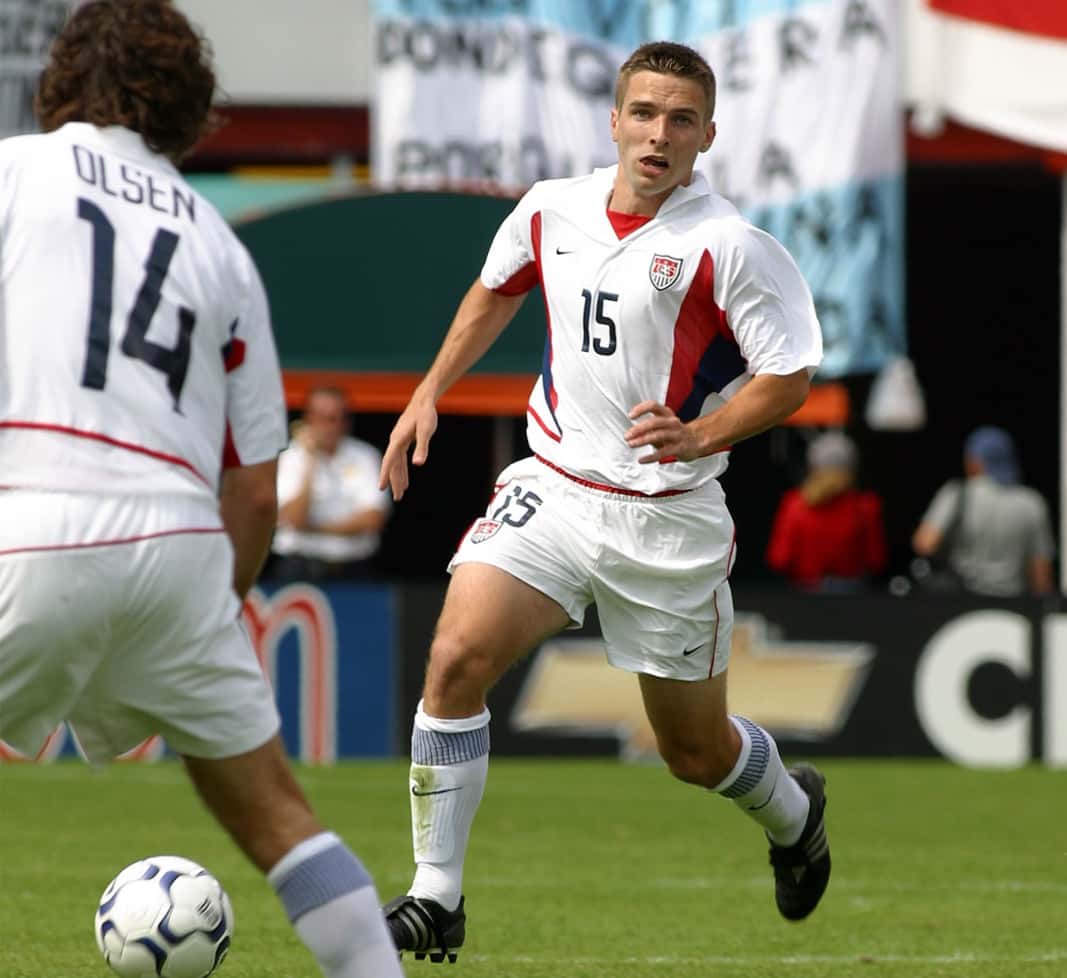 Just as Bobby Convey established himself during his rookie year with D.C. United in 2000, he was called up to play for the USMNT at the end of that season, making his debut in a 2-0 friendly victory against Mexico in Los Angeles on Oct. 25, 2000. A minute into stoppage time, Convey (17 years, 151 days) replaced fellow debutant -- 18-year-old Landon Donovan -- who scored a goal and assisted on the other in that encounter.

He became the third player under 18 to start an international match in a 2-1 loss to Brazil at the Rose Bowl in Pasadena, Calif. on March 3, 2001. Of the 17-year-old debutants, the midfielder has represented the USA the most with 46 caps.

Captain of the U.S. side that competed at the 2003 FIFA Under-20 World Cup in United Arab Emirates, the 5-foot-9, 150-lb. Convey started three matches for the USA at the 2006 World Cup. He featured for the San Jose Earthquakes, Sporting Kansas City, Toronto FC and New York Red Bulls and Reading (England) before retiring in 2014. 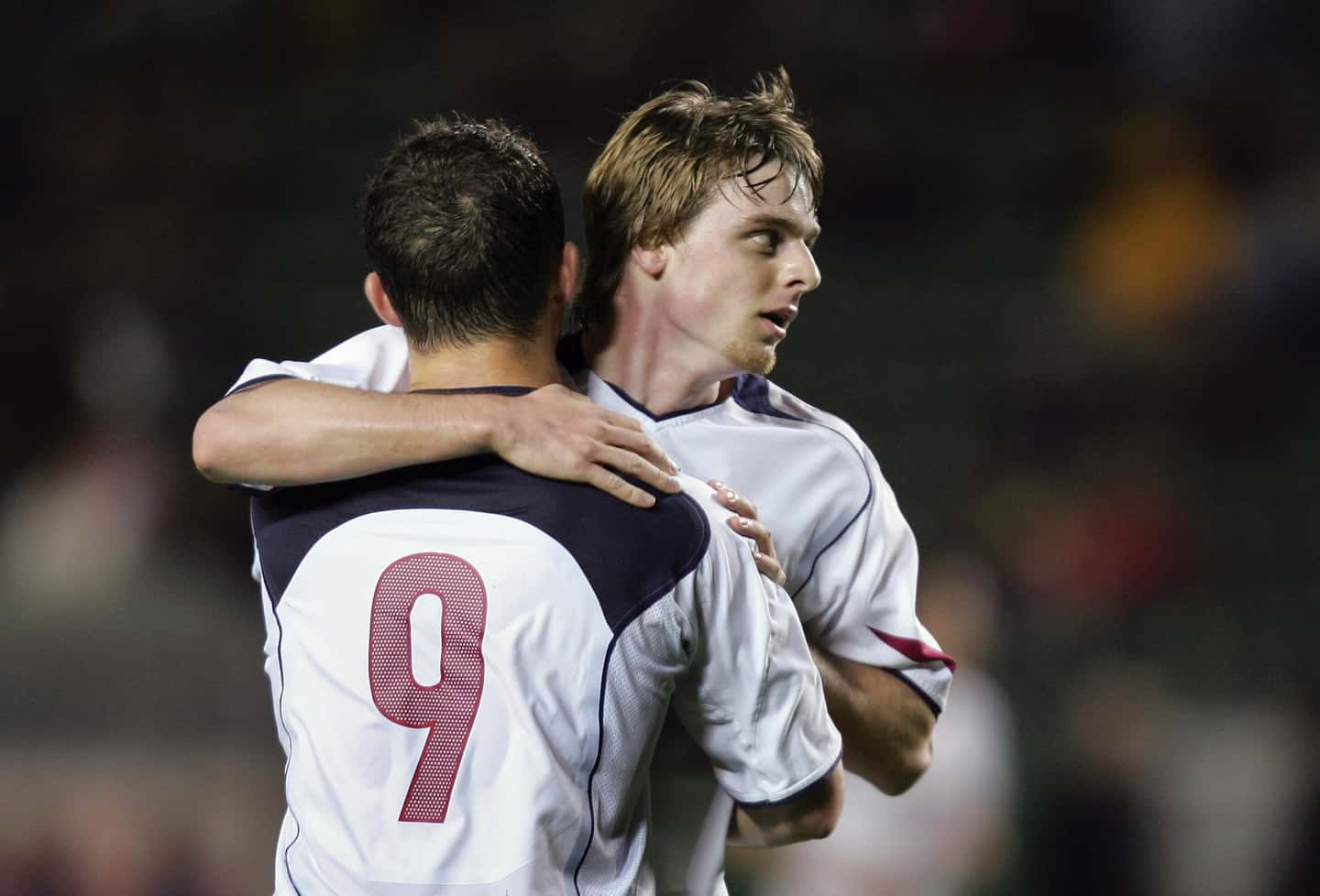 At 17 years, 259 days, midfielder Eddie Gaven earned his USMNT debut on July 11, 2004 in a 1-1 draw with Poland at Soldier Field in Chicago after replacing Kerry Zavagnin in the 82nd minute. He was involved in Carlos Bocanegra's 88th-minute goal, setting a pick to allow the defender to get free.

Gaven, who made eight USMNT appearances, competed in the 2003 FIFA Under-17 and 2005 U-20 World Cups. Selected by the MetroStars (New York Red Bulls) as the 12th overall pick of the 2003 MLS SuperDraft, he recorded several notable MLS milestones. At the time, Gaven was the second youngest choice in league history.

In 2004, he became the youngest player voted to start an MLS All-Star game and was named to the league's Best XI. Gaven helped Columbus Crew SC capture the 2008 MLS Cup. After becoming the youngest MLS player (25 years, 257 days old) to reach 250 games, Gaven, still with Columbus, retired at 27 in 2013. 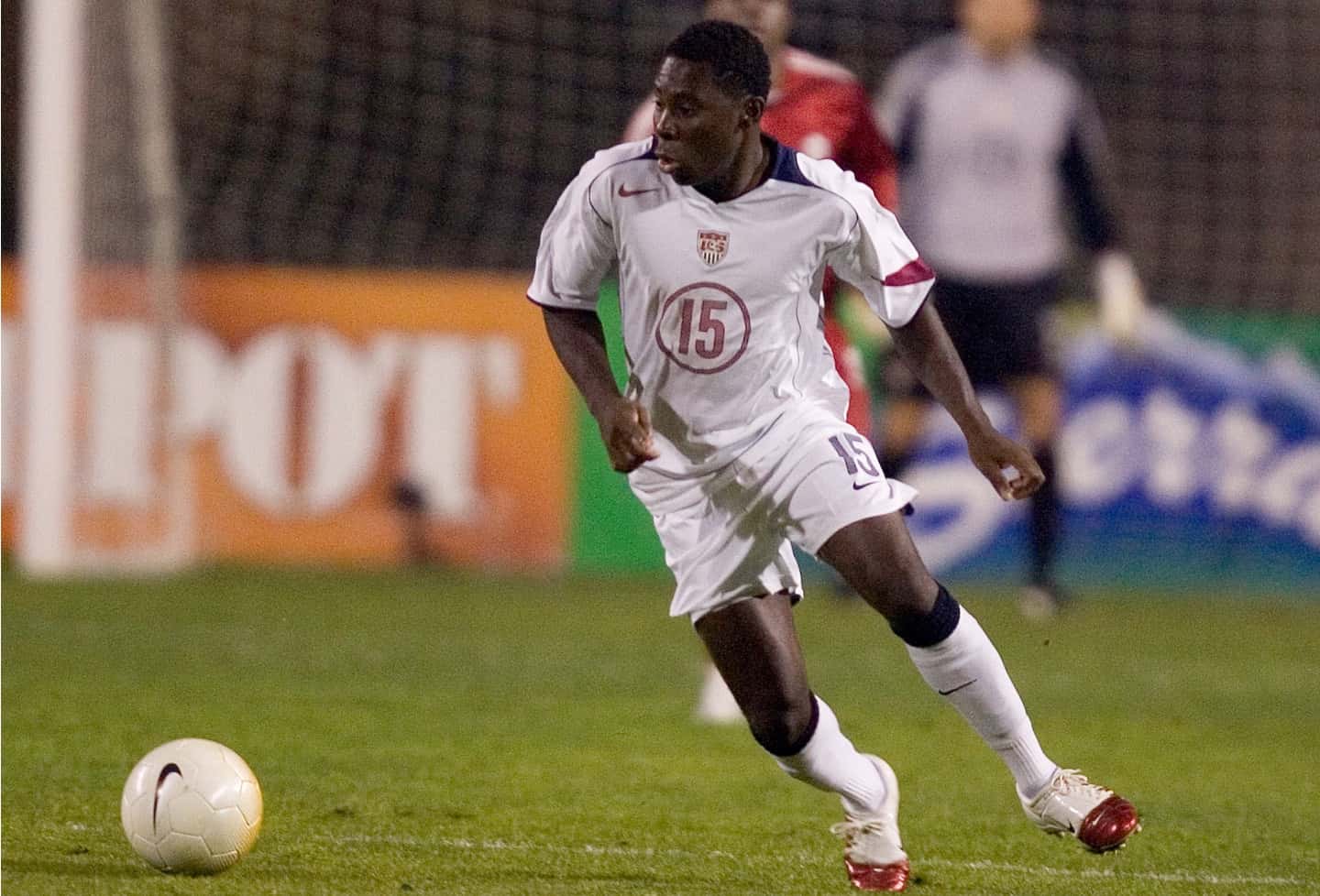 In 2003, Freddy Adu generated international headlines, signing with Major League Soccer at age 14. With D.C. United in 2004, he also set records as the youngest player to appear in a league match and score in a game.

He became the youngest player to play with the USMNT (16 years, 234 days), subbing for an injured Eddie Johnson in a scoreless friendly draw with Canada in San Diego on Jan. 22, 2006. Two minutes after entering, Adu was shown a yellow card. The 5-foot-8, 140 lb. midfielder-forward represented the full national side 17 times, scoring twice. 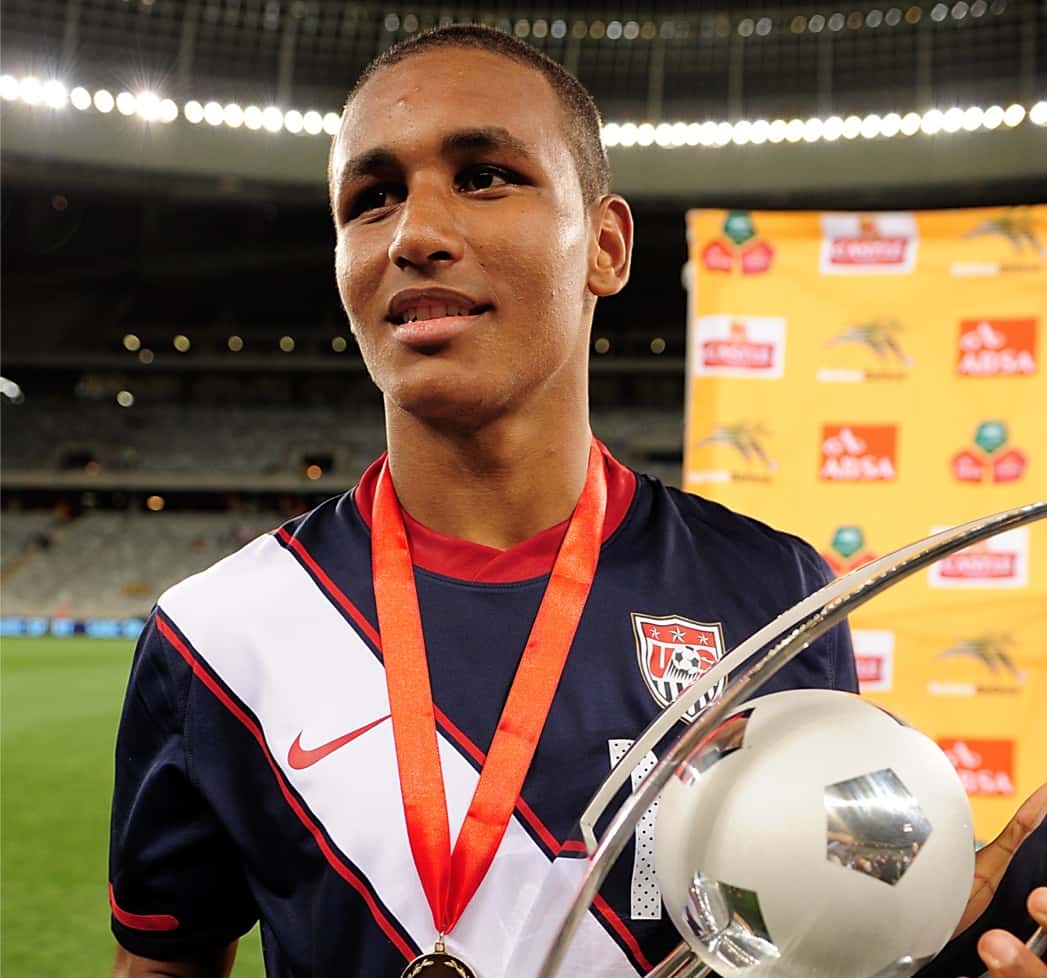 Wearing No. 17, Agudelo replaced Robbie Rogers in the 61st minute before performing his heroics in the 85th minute. Agudelo executed a give-and-go with Mix Diskerud before ramming his seven-yard shot from the left side off the crossbar. Agudelo, 27, has scored three goals in 28 international appearances and was part of the 2017 Concacaf Gold Cup winning squad.

He has performed with the New York Red Bulls, Chivas USA, New England Revolution and currently with Inter Miami CF (Major League Soccer). He also has played on loan with FC Utrecht (the Netherlands). 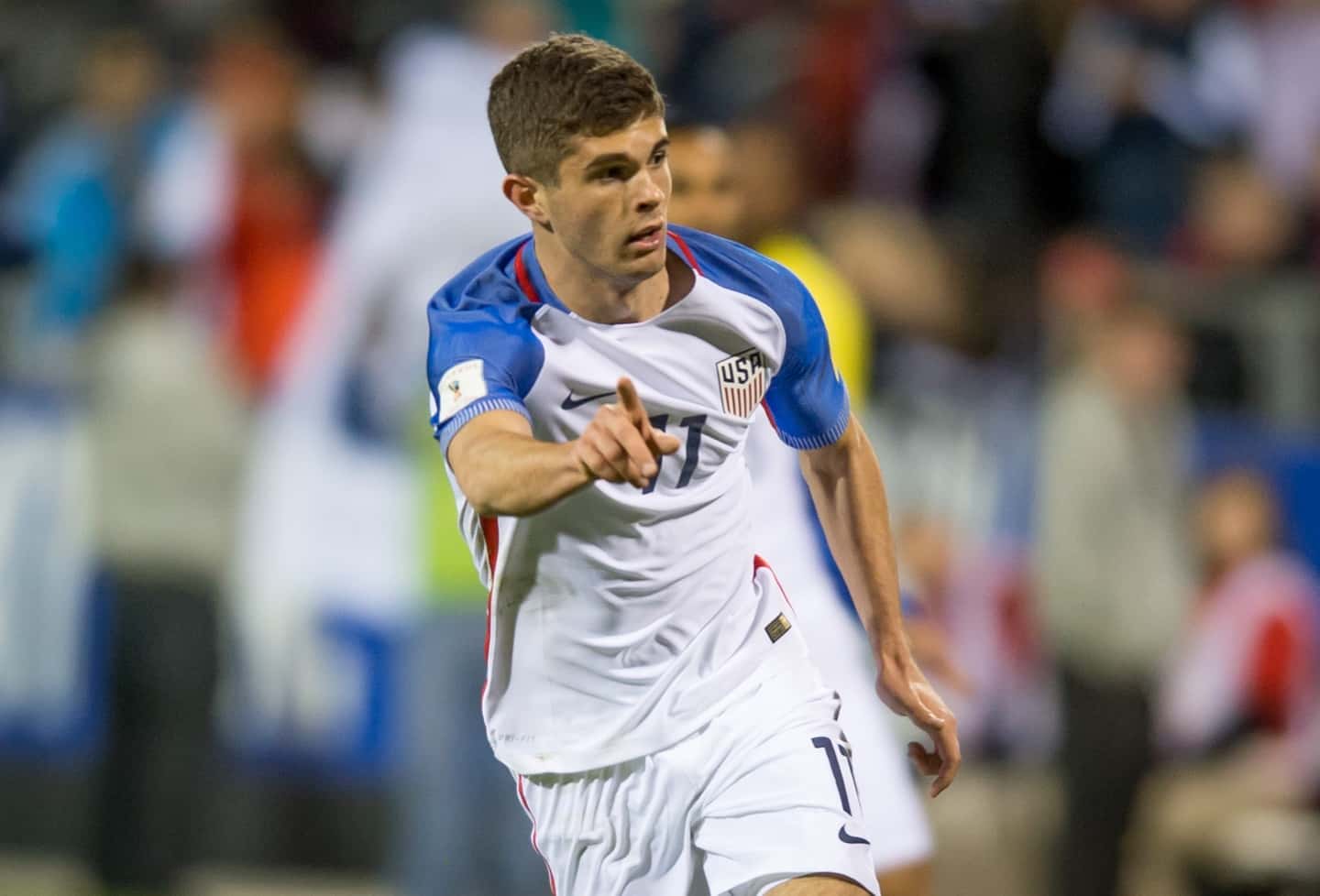 As far as caps earned by players under 18 go, Christian Pulisic took things to another level.

In a 6-0 triumph at St. Vincent and the Grenadines on Sept. 2, 2016, Pulisic became the youngest player to score in a World Cup Qualifier (17 years, 349 days) behind a two-goal, one-assist performance after coming on in the 61st minute. Four days later, he became the youngest USA player to start a qualifier in a 4-0 win vs. Trinidad & Tobago.

By the time he was 18, Pulisic had already played a record eight times for the USA. Now 22, Pulisic has scored 14 goals and assisted on nine in 34 appearances. He started his career with Borussia Dortmund in 2016 before securing a $73 million move to Chelsea in 2019 -- the largest transfer fee for a U.S. international in history.