BE THE CHANGE: How George Floyd’s Murder Drove Zack Steffen to Launch the VOYCENOW Foundation

There are a lot of things to forget about the year 2020, but there are some things many Americans - especially Black Americans - will never forget.

That’s how long a Minneapolis Police Officer had his knee on the neck of 46-year-old George Floyd, suffocating him to death. Before streets around the world were engulfed with people of all races fed up and tired of these horrible acts, the brutal and gross reality had to set in.

That is, if you made it through a painful eight minutes and 46 seconds of a man being killed on video. In Germany, thousands of miles away from the United States, sat U.S. Men’s National Team and Manchester City goalkeeper Zack Steffen. Even on another continent, the vile and harrowing video was too much for him to take. 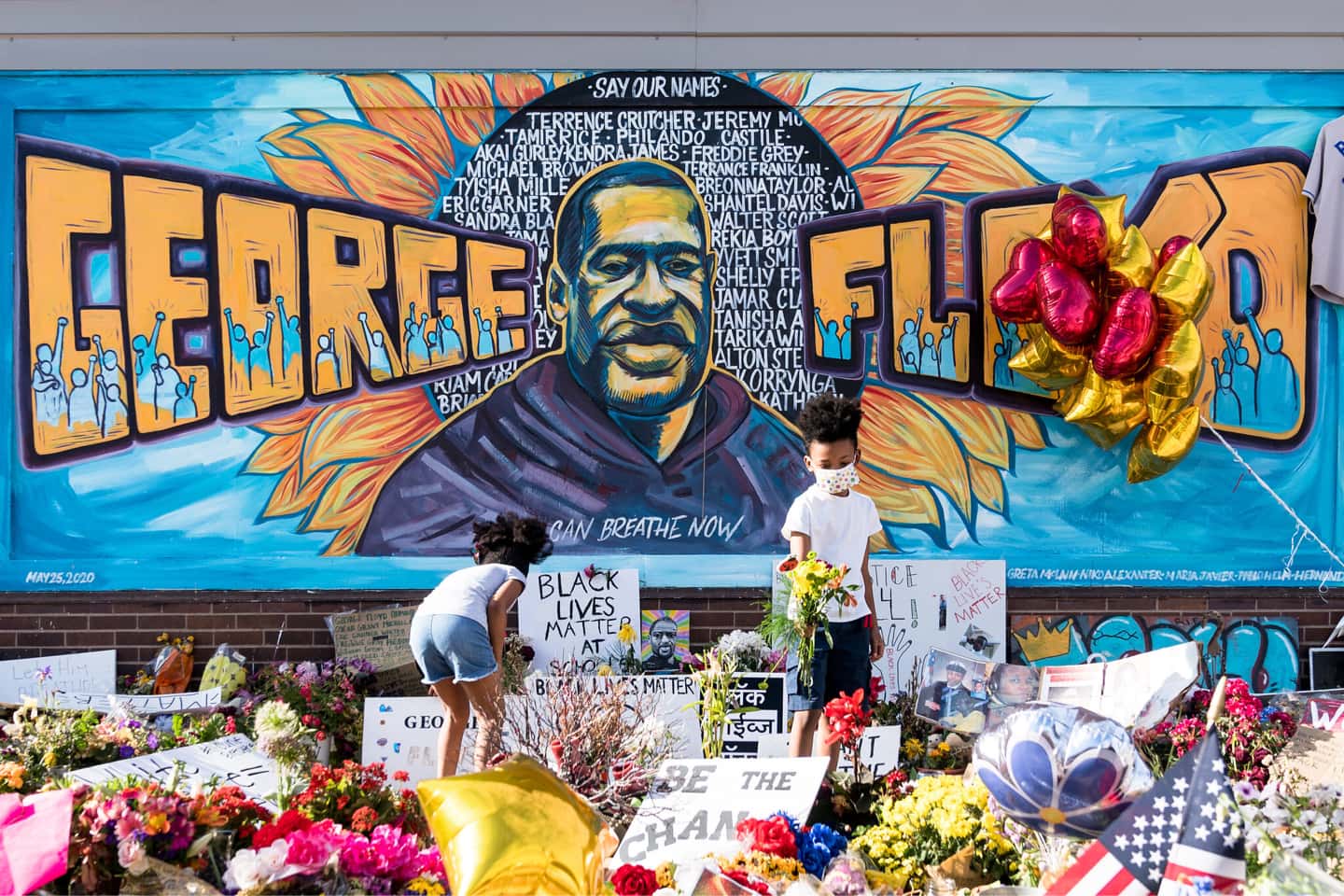 “It was just disgust,” Steffen said. “Heartbreak, and nothing made sense. I just felt really small at that moment. I haven’t even watched it all the way through yet, and I was in Germany at the time so it was tough because I couldn’t do much.”

Unprompted, he took to social media posting a statement speaking on the horrific events in Minneapolis:

“As a goalkeeper for the United States Men’s National Team, it is the greatest honor to wear the U.S. badge on my chest. I proudly defend my team’s goal on the field and work hard to ensure I am representing my country in the best light off the field as well. But what does it mean when the very nation I protect the goal for won’t protect its citizens who look like me? When its leaders disregard our most basic human rights? When our lives are at risk for simply just existing?”

Steffen knew then that he needed to do something. Even if he was on another continent, he knew that he could no longer sit and stay silent. He needed to speak. He needed to let his voice be heard.

Months before the anger and frustration of the Floyd incident, Zack, along with his mother Stefanie, was trying to figure out ways to use his now massive platform in a more charitable fashion but had no specific lane they were going to take.

Out of that anger and frustration of the events of May 25 sparked the grand idea for the goalkeeper.
I knew that I needed to use my platform for something more than just myself and my career. After watching that (George Floyd) video and saw everybody going crazy, I knew I needed to do something.
Zack Steffen

VOYCENOW was launched as a platform for athletes of all races, creeds, and backgrounds to gather and stand up for social change. Including many of Steffen’s USMNT teammates, there are more than 100 athletes across six sports, spanning 20 different leagues and in 13 different countries joining the cause.

Since launching the project, VOYCENOW has donated more than $50,000 to the Minority Education Fund, which helps provide important education resources for children of color.

One of the first people to come on board as a teammate in this effort was someone Steffen had shared a locker room with and had various conversations on race in America. 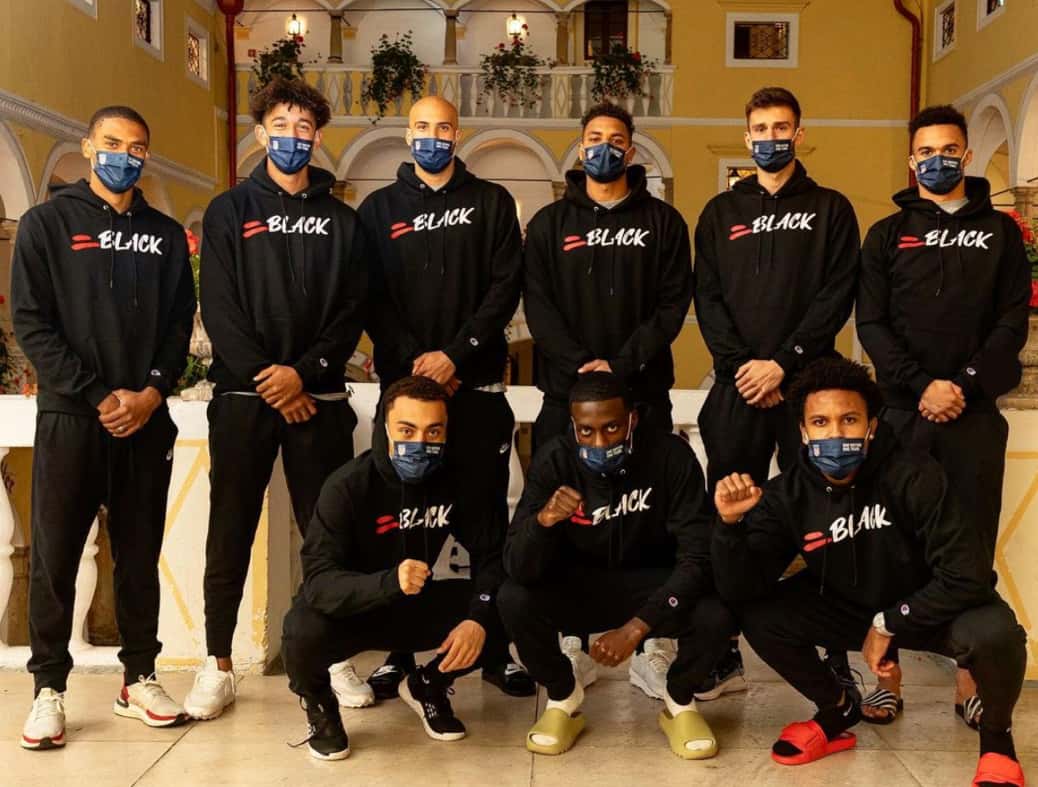 Alex Crognale, a former teammate at the University of Maryland and Columbus Crew SC, understood his privilege and his life’s journey. However, as he began talking with teammates of different races and learning how vastly different their paths and journeys were, Crognale become more involved in helping bring a voice to those who may be lost in the shuffle.

“Growing up, I had everything I needed as a kid,” Crognale said. “My parents took care of me and I’m a white male growing up in America. For me things are easy, right? As I grew older and saw the racism and racial inequality going on and I’d talk with my teammates and friends, and as teammates we’d leave the locker room and go live separate lives. My teammates, especially Zack (Steffen) would tell me about the things they go through in their everyday lives. I was vastly different than anything I’d experienced.”

“We experience two different things in the same country. That idea just really rubbed me the wrong way. I almost felt guilty because I didn’t know how I could get involved in this movement. I’m glad Zack came to me after the George Floyd killing and we just talked about what the hell is going on and why does this keep happening in this country? It ultimately led us to think about what we can do about it, and that’s where this idea of VOYCENOW came to be.”

VOYCENOW focuses on raising funds to support the next generation of kids. They recognize that the youth of today will become the leaders of tomorrow. The organization strives for giving them a more level playing field and equal opportunities regardless of race.

As of this moment, VOYCENOW is partnering with the Boys and Girls Clubs of America in Baltimore, Boston, Chicago, Columbus, Los Angeles, Philadelphia, and Washington D.C. Office sites have been set up for kids who are having trouble keeping up in socially distant learning settings due to the lack of resources, funds and capable equipment.


“We want to help our kids be educated on what’s going on in the world,” Steffen said. “The biggest thing for us is we want to establish relationships with these kids and their families in the cities where we’re located.”


“We know we can’t reach every kid, but our goal is to help as many kids as possible.”

With the global health pandemic putting a halt to international soccer for much of 2020, it was impossible for USMNT players to physically come together most of last year. In that time, Steffen and his teammates stayed connected through a giant WhatsApp messaging group. Things evolved in the aftermath of the George Floyd murder, with the team having longer, more pointed talks via videoconference about racial inequality in the United States and what they could do about it as a group.

“We talked about what the culture of our team is, and that’s diversity all across the board --respecting each other and being professional,” Steffen said. “What can we do? It was tough due to COVID and being apart, but we were having those conversations and we continue to have those conversations.”

In November, the USMNT was finally able to hold a training camp, gathering for friendlies in Wales and Austria. As one of the first National Teams in any sport to represent the United States since the events of the summer, Steffen and his teammates viewed the matches as an opportunity to send a bold statement and show an example of unity within the diverse group that makes up the USMNT.

The team united on the message of “Be The Change”, which was printed on the front of the jackets they wore for the playing of the national anthem prior to the games against Wales and Panama. 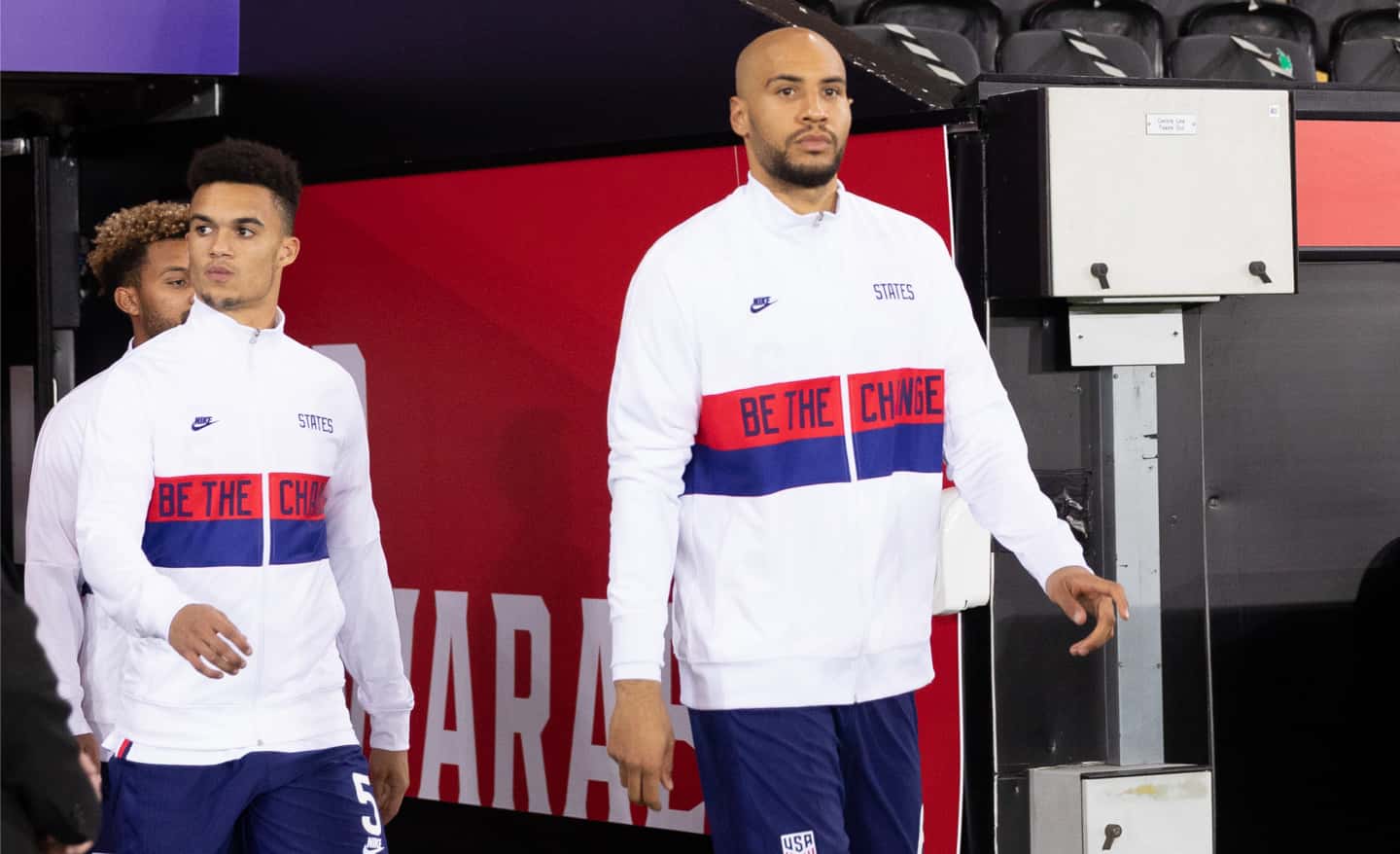 On the back, players were given the freedom to insert their own messages, showing in their own special way how they were standing up against racial injustices that has engulfed the nation for far too long. 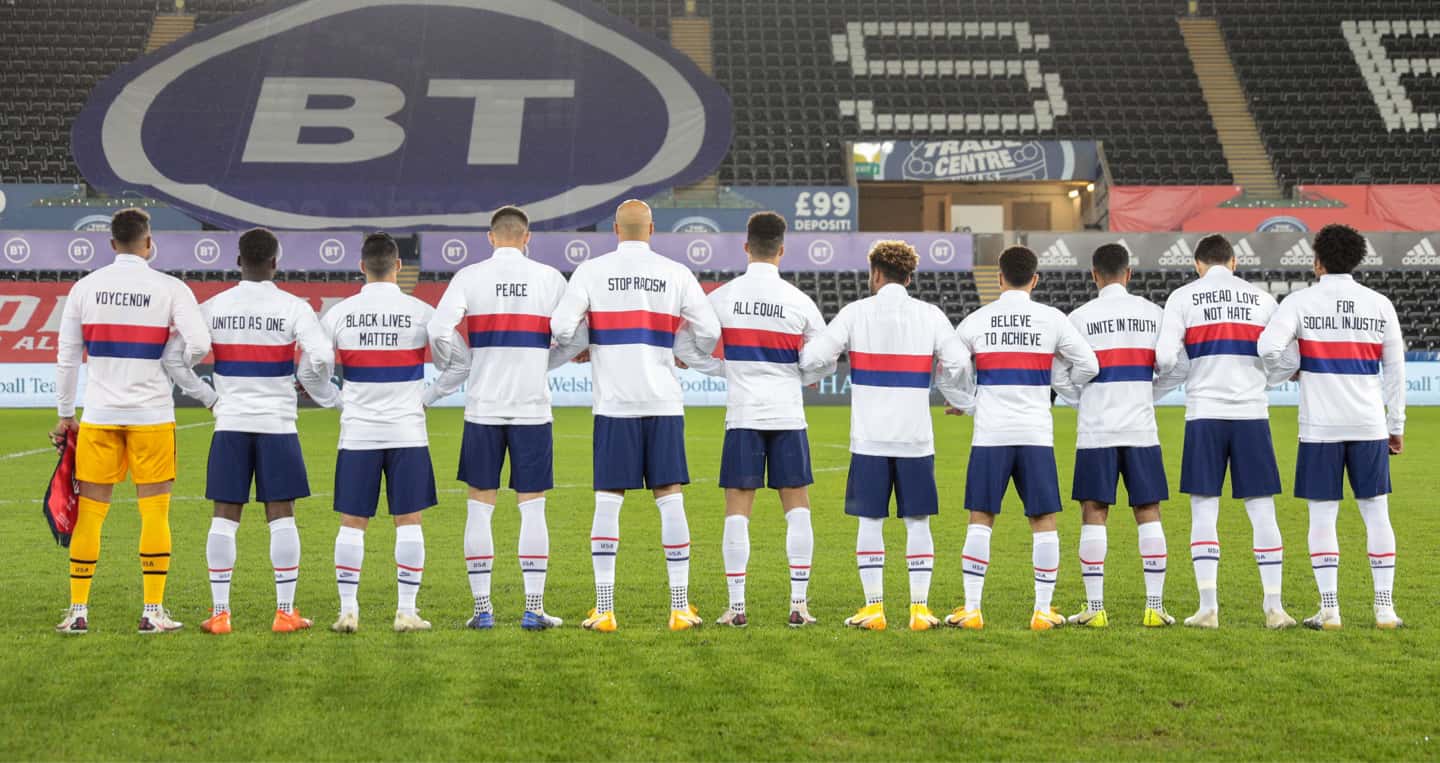 Following the matches, many players on the team donated the jackets to be auctioned off by VOYCENOW, with proceeds benefiting the Minority Education Fund.

The latest venture from VOYCENOW was a 10K “Run for Equality” that was done virtually across the world. Steffen’s foundation got a tremendous boost from the University of Maryland, his alma mater, and some personal friends including Crognale.

With Steffen across the pond in England, the VOYCENOW Community came together led by Crognale, his fiancee Kyle Dawson and friend Chris Korte, who helped put together the event. Due to the pandemic, the traditional 10K run could not be done so planning and organizing the event virtually turned out to be a boon to the group’s plans.

“We didn’t have to find a venue or a stretch of road,” Crognale said. “Using the power of social media, we set up a website where people could sign up and register for the event to either run or bike yourself. The University of Maryland soccer team was hosting it; you could sponsor one of the players and donate money on their behalf.”


“We tracked everybody doing the run by simply putting a hashtag #10KFor10K. On race day you could track everybody's progress and see people posting their times. It was a fun way to engage with the community and raise money for this good cause.”

For all the charitable efforts done by Steffen and his partners, the work still remains not only to help spur conversations about these things in the public sphere but also the locker room of his national and club teams.

Steffen has found it somewhat easy to have these uncomfortable conversations regarding race and the state of the world with teammates in the USMNT, and his club team Manchester City. He credits years of playing with guys from diverse backgrounds and the willingness of others to come to him to talk about tough topics that may otherwise be difficult to discuss in the locker room or off the field settings.

Although the topics may be tough, Steffen appreciates that his club teammates are willing to talk with him about what is going on in America during a rise of social justice. In the last year he is open to admitting that even if he’s found his voice, the work continues for not only the country but for him as well.


“I still have a lot to learn. I’m maturing in that way, but I still have some growth,” Steffen said. “Being the face of a non-profit, being a leader, and learning more history of the work being done and more educated on what’s going on so when I speak out and talk about my beliefs, it’s factual. That’s really what helped spark VOYCENOW. I was tired of these things happening, so I decided to speak up.”

Learn more about the work of the VOYCENOW Foundation by visiting voycenowfoundation.org. 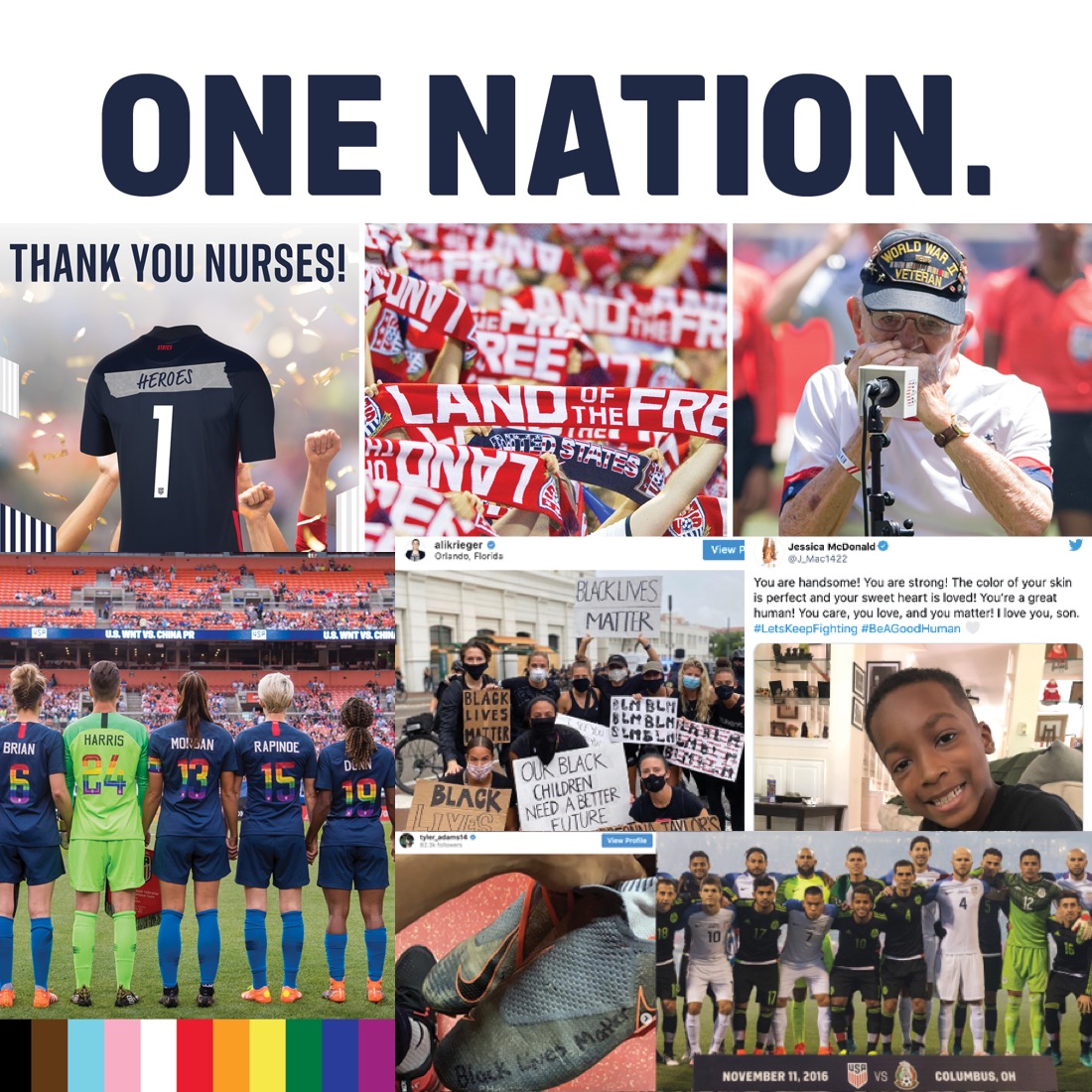 One Nation. - Highlighting work that is being done within the soccer community to support, engage, educate, and promote diversity and inclusion.

One Nation. - Highlighting work that is being done within the soccer community to support, engage, educate, and promote diversity and inclusion.