Somewhere deep in the bowels of Exploria Stadium on March 25 in Orlando, Florida, Kathryn Nesbitt will sit silently in the referee locker room. She’ll hold the same, small card that she has read for the last 10 years before every match she has worked.

Meanwhile, elsewhere in the stadium, members of the Canada and Bermuda Men’s National Teams will be making their final preparations for their crucial First Round Concacaf World Cup Qualifier.

Just before 8 p.m. Eastern Time, in the final moments of solitary reflection, Nesbitt will study the simple statements on that card, though she already knows them by heart.

“Confidence. Wait and see what happens. Have fun.”

While she is no stranger to refereeing games at the highest levels, Nesbitt will record yet another first when she steps onto the pitch as the first female assistant referee to officiate a Men’s Concacaf World Cup Qualifying match. 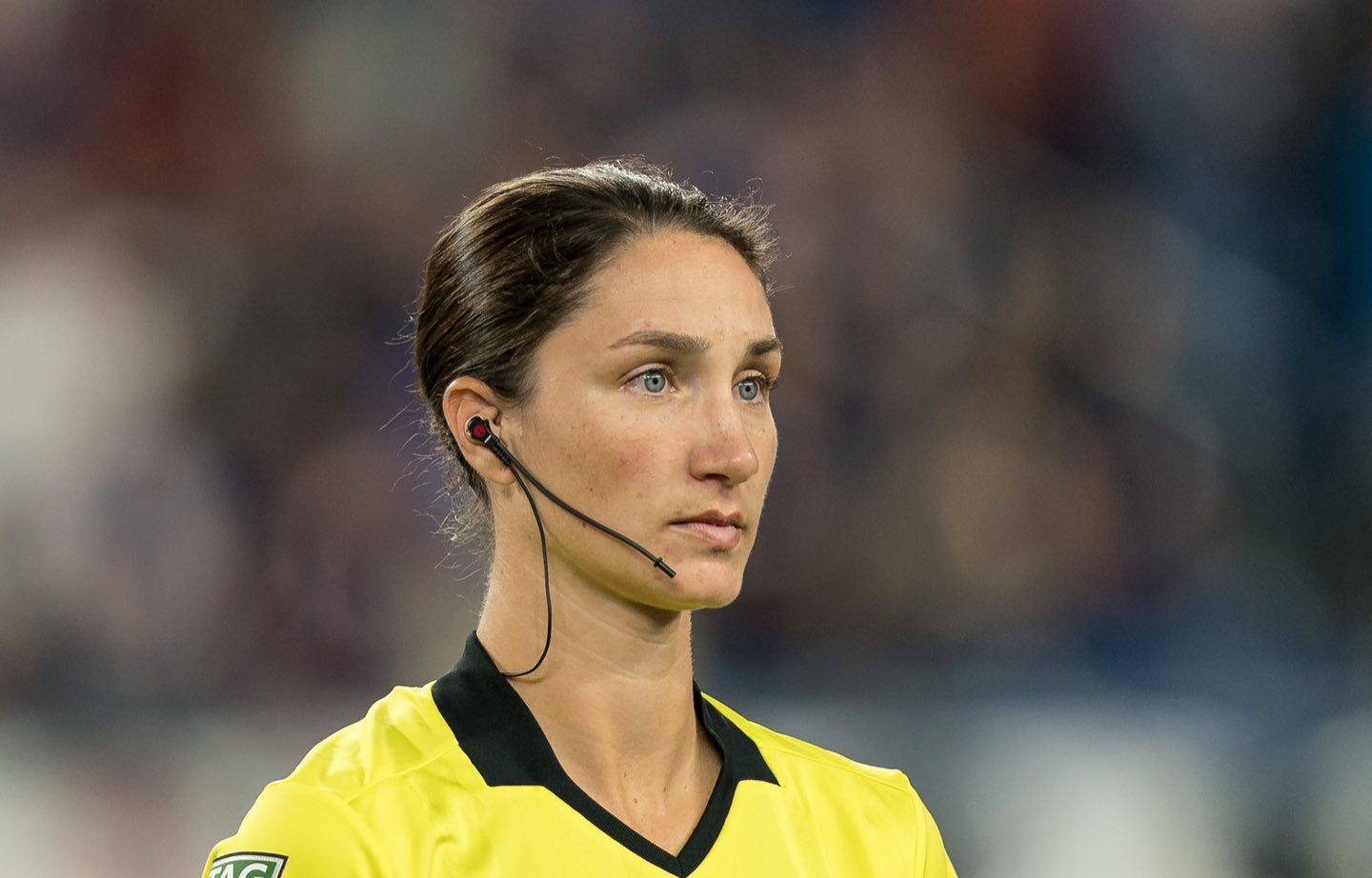 Nesbitt was named the 2020 MLS Assistant Referee of the Year.

Previously, Nesbitt was the first woman to referee a championship match in professional men's sports in North America when she took the field as an assistant referee in the MLS Cup Final last year. She also recorded a first as part of the crew that officiated the MLS is Back Final and was later named MLS Assistant Referee of the Year for all her work in 2020. This year, Nesbitt was the first woman to officiate a Concacaf League Final.

“What was really neat about last year was that I got to experience some moments I didn't expect to have,” Nesbitt said.

Like most everyone, life was put on pause for Nesbitt in March 2020. After working a few women’s tournaments, Nesbitt found herself in a sporting void while the COVID-19 pandemic took front and center. The break allowed her to take a much-needed rest following 2019, a year in which she worked five matches at the 2019 FIFA Women’s World Cup, including the Round of 16 match between Sweden and Canada and the Third-Place Match between England and Sweden.

In July 2020, Major League Soccer returned to play with its MLS bubble and the MLS is Back tournament. Nesbitt received the call that she would be part of the officiating team assigned to the bubble.

“One of the games we had in the Orlando bubble kicked off at nine in the morning,” Nesbitt said. “I think I was 14 the last time I had a game at 9 a.m. on a Saturday. There was an Orlando rain shower and we had to delay the game for like two hours, but I went back out and made two really quick, good decisions after the restart. That was really cool for me because it was my third game back after being quarantined for so long that I was like ‘wow, I'm really glad that I have my confidence back already.’”

Nesbitt is naturally a confident person, and it shows in her work. While she is paving a path for other young referees with her collections of firsts, she is not alone in this current moment of women officiating elite games. Assistant referees Jennifer Garner and Brooke Mayo will also head to Florida this month to officiate World Cup Qualifiers along with referee Tori Penso, who has a first of her own.

On Sept. 23, 2020, Penso became the first woman in 20 years to be the lead referee of a Major League Soccer match when she was in the middle for the D.C. United-Nashville SC clash.

She followed in the footsteps of the legendary Sandy Hunt, who last called an MLS game in August of 2000. Additionally, Nancy Lay also refereed MLS games that year. Both are women Penso has looked to for guidance in her own referee journey.

“There's not a lot of us. It's a tight-knit community,” Penso said. “I would say we probably have higher expectations [for other women] than the guys. But we are pushing each other constantly and celebrating each other's successes because each one of our successes is really all of our success.” 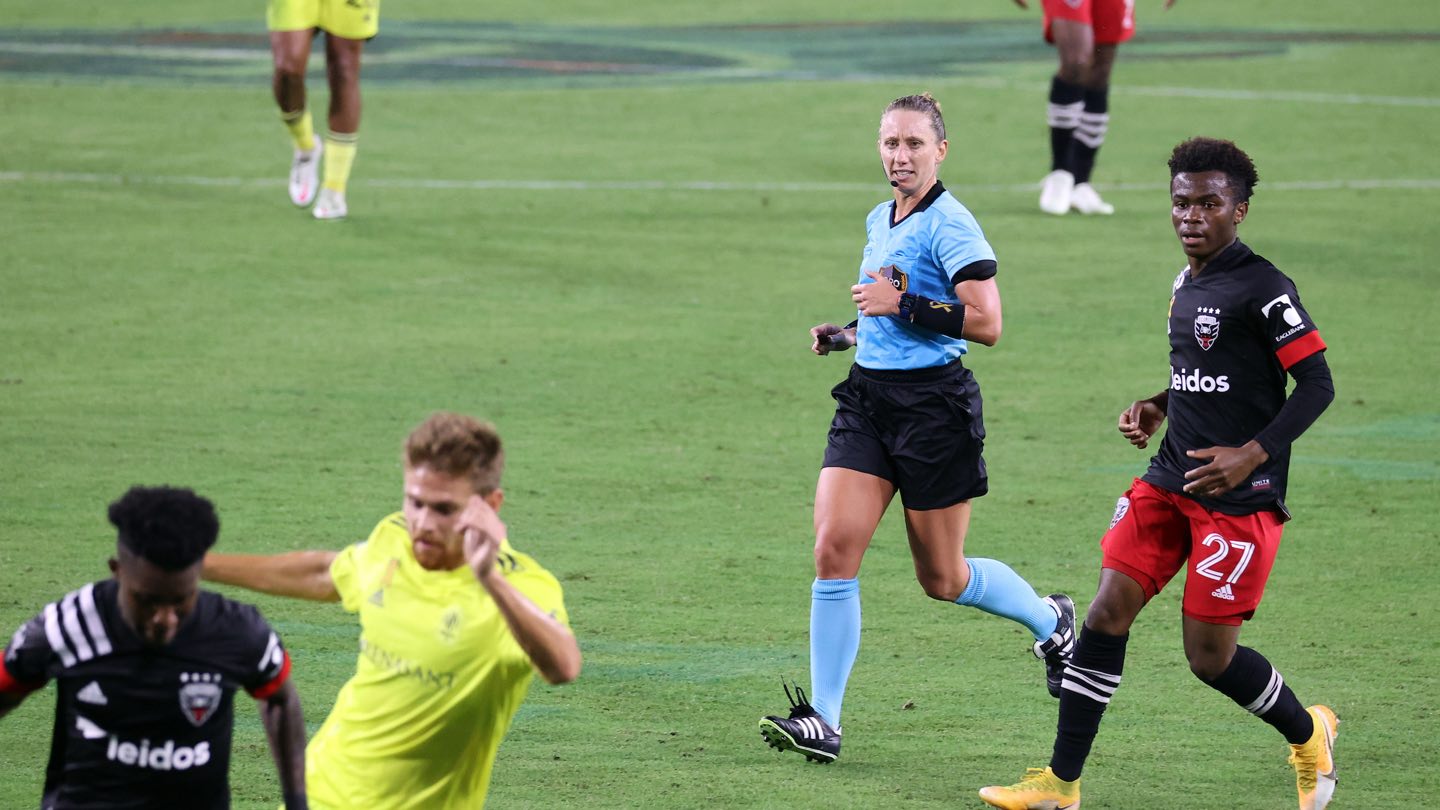 Penso earned her FIFA badge this year and refereed her first women’s international match, Canada against Argentina, at the 2021 SheBelieves Cup tournament. Alongside her was assistant referee Brooke Mayo, who was mentored by Penso’s husband, Chris, in 2013.

“It's full circle now that I get to work with Tori,” Mayo said. “All of us also mentor now, and we go back to these events and try to mentor and inspire both male and female officials to reach their highest levels.”

Mayo and Penso will reunite as part of the groundbreaking group of American women refereeing at the Men’s Concacaf World Cup Qualifiers. Mayo, as an assistant referee, and Penso, as the fourth official, will team up to officiate Cayman Islands against Canada on March 28.

“We both have an understanding of all the work that it took to be able to get that opportunity,” Mayo said. “I think there'll be a little bit more appreciation in that moment, just because we can look at each other and say we were able to get here.”

Penso will also be working the qualifying game between Aruba and Suriname as a fourth official on March 27 at IMG Soccer Stadium alongside assistant referee Jennifer Garner. Garner worked with Penso at the 2020 National Women’s Soccer League Challenge Cup in what was the first team sport competition to return in the United States after the pandemic paused play.

For Garner, the Men’s Concacaf World Cup Qualifying match will be her biggest assignment yet.

JUGGLING TWO JOBS AT ONCE

Garner was eating a Cuban sandwich at a restaurant with her husband when she got a text from Concacaf Referee Manager Lance VanHaitsma. A referee and high school History teacher on spring break, Garner had to step outside to get cell service.

On the phone, VanHaitsma informed Garner she would be a part of the officiating crew for Concacaf World Cup Qualifying. She immediately shared the news and celebrated with her husband, Adam, who also has experience as a FIFA referee.

“Of course, he was just as excited as I was,” Garner said. “It was amazing that he was there when I actually found out.” 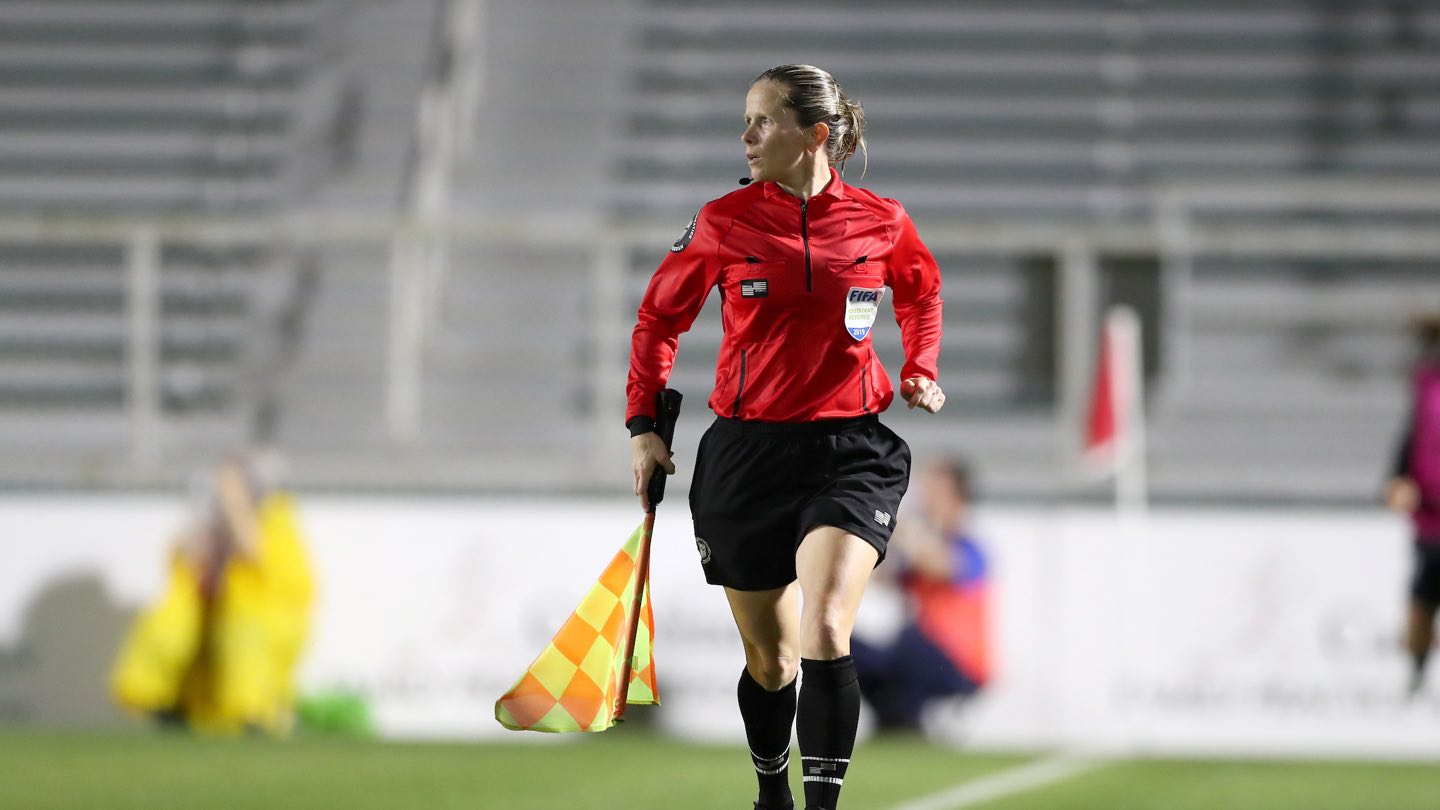 Most referees in the United States have more than one job. Nesbitt, who has a PhD in chemistry and left her job as a professor at Towson University in 2019, is one of the few to be a full-time assistant referee.

For Garner, her “9-to-5” job is as a high school World History teacher. She balances her school schedule with her passion for soccer. She calls available games in NWSL, MLS and USL as well as a few international matches throughout the year.

“I used to coach soccer, as well,” Garner said. “I gave that up several years ago to help focus on refereeing and so I teach high school and I referee. From my perspective, it's two full time gigs.”


She loves teaching but would jump at the opportunity to try full-time refereeing because of the intense workload of traveling, studying for games and keeping fit. Often overlooked, referees are athletes too and must meet FIFA standard fitness tests each year.

Mayo understands balancing the work, and is also an educator, teaching wellness and weightlifting, along with coaching a high school boys’ soccer team. She was the first female coach in the highest soccer division in Tennessee high school sports in 2013.

Mayo, a former Division 1 soccer player at Tennessee Tech University, has been a player, coach and referee. But refereeing is her passion.

“It’s very challenging because we're expected to perform as a referee at a professional level like it is our full-time job,” Mayo said. “You have to make sure you're getting your workout in before work or after work on top of your meetings and your clip analysis and watching games and traveling. It's a lot, but I'm really thankful for the opportunity.” 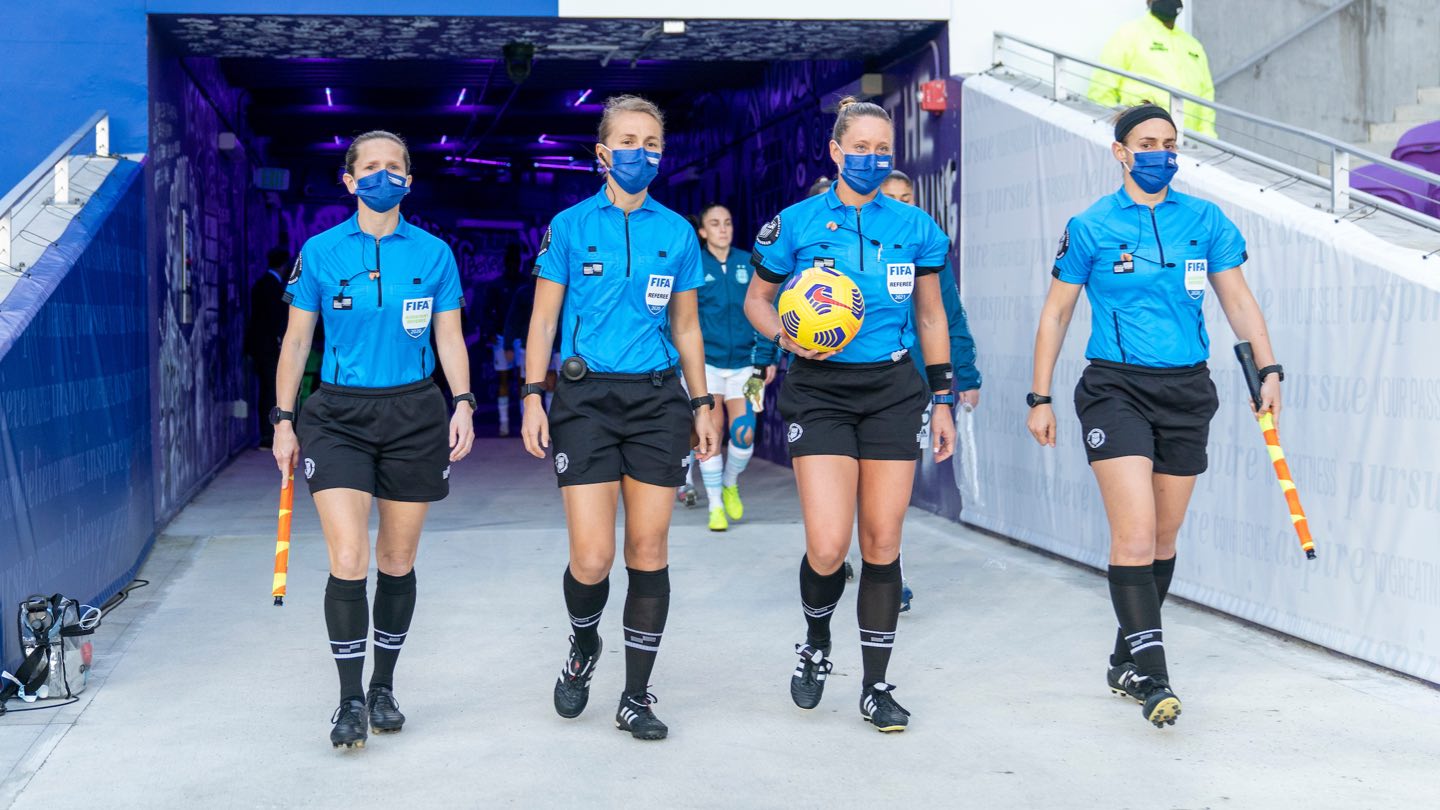 Penso also understands that balance as she had a nine-year career in marketing with companies including Coca-Cola and Red Bull while coming through the refereeing ranks. She has put marketing on pause to focus on refereeing as she aims to become the first full-time lead referee for the Professional Referee Organization.

“I'm on the cusp,” Penso said. “I had some trial spots in MLS last year, which was an amazing feat. I'm knocking on the door. Hopefully soon I will become a full-time official, which will alleviate a lot of stress.”

For Nesbitt, adding another first to her resume comes with a small amount of internal conflict and a large responsibility.

“I have approached things differently as a woman, and potentially as one of the first doing things,” she said. “I do feel some pressure of wanting to represent and show who we really are as women, but at the same time, I also just want to go unnoticed.”

Nesbitt relies on her fitness and decision-making to prove she belongs. Ask any of the four women representing the United States as referees during Concacaf qualifying, and they’ll tell you that a good game for a referee is one where you don’t stand out. It is often a thankless job, but one that when done well keeps the game and the players safe.

“We're finally getting opportunities,” Penso said. “These opportunities are well-earned. They are because there have been persistent, consistent, strong performances to get us there.”

There is one thing that all four of these referee pioneers know: the firsts that Nesbitt, Garner, Mayo and Penso are carving out during the 2021 Men’s Concacaf World Cup Qualifying matches are only the beginning.

“The next step is just normalizing it. It's not going to be in the news anymore, because it's normal,” Mayo said. “The best person regardless of gender, regardless of ethnicity, gets the job, and that's what's expected.”