Young Stars Headline Roster as USA Faces Jamaica on March 25 in Austria; Three Days Later Will Face Northern Ireland for First Time in More than 70 Years
March 17 2021
On the Pitch

CHICAGO (March 17, 2021) – U.S. Men’s National Team head coach Gregg Berhalter has named a 26-player training camp roster as the USA prepares to gather in Austria for its second camp of 2021 and the first of the year on a FIFA international fixture date. The players will begin reporting March 20 to Austria ahead of a pair of friendlies in Europe.

The USMNT will continue preparations for a significant year that includes the Concacaf Nations League Final Four in June, the Gold Cup in July and the start of 2022 FIFA World Cup qualifying, when it returns to action against Jamaica on March 25 at Stadion Wiener Neustadt in Wiener Neustadt, Austria. Kickoff in the rematch of the 2019 Concacaf Gold Cup Semifinal is set for 1 p.m. ET, and the match will be broadcast live on ESPN2, UniMás and TUDN.

Three days later, the U.S. meets Northern Ireland for the first time in more than 70 years. The National Football Stadium at Windsor Park in Belfast hosts the contest, set for 12 p.m. ET with coverage on FOX, UniMás and TUDN.

“This is another step forward in strengthening our group in preparation for Nations League, Gold Cup, and World Cup Qualifying. It’s great to get the group together to continue to build relationships on and off the field. We look forward to the games and the different challenges they will pose.”

Despite containing a plethora of mainstays since Berhalter took the helm, the roster still averages only 11 caps, with 14 players having earned eight or less.

Based on current conditions related to the global pandemic, the matches will be played without fans in the stadiums. The staging of the camp and the matches will fall under the comprehensive U.S. Soccer Return to Play Protocols and Guidelines and in line with both the FIFA and UEFA Return to Play Protocols, as well as stringent oversight by the Irish Football Association for the match in Belfast. The participants have received an exemption from quarantine provided to professional sports organizations.

Due to Covid-19 quarantine restrictions, several players will return to their clubs following the match against Jamaica.

* Indicates player will depart after March 25 match against Jamaica 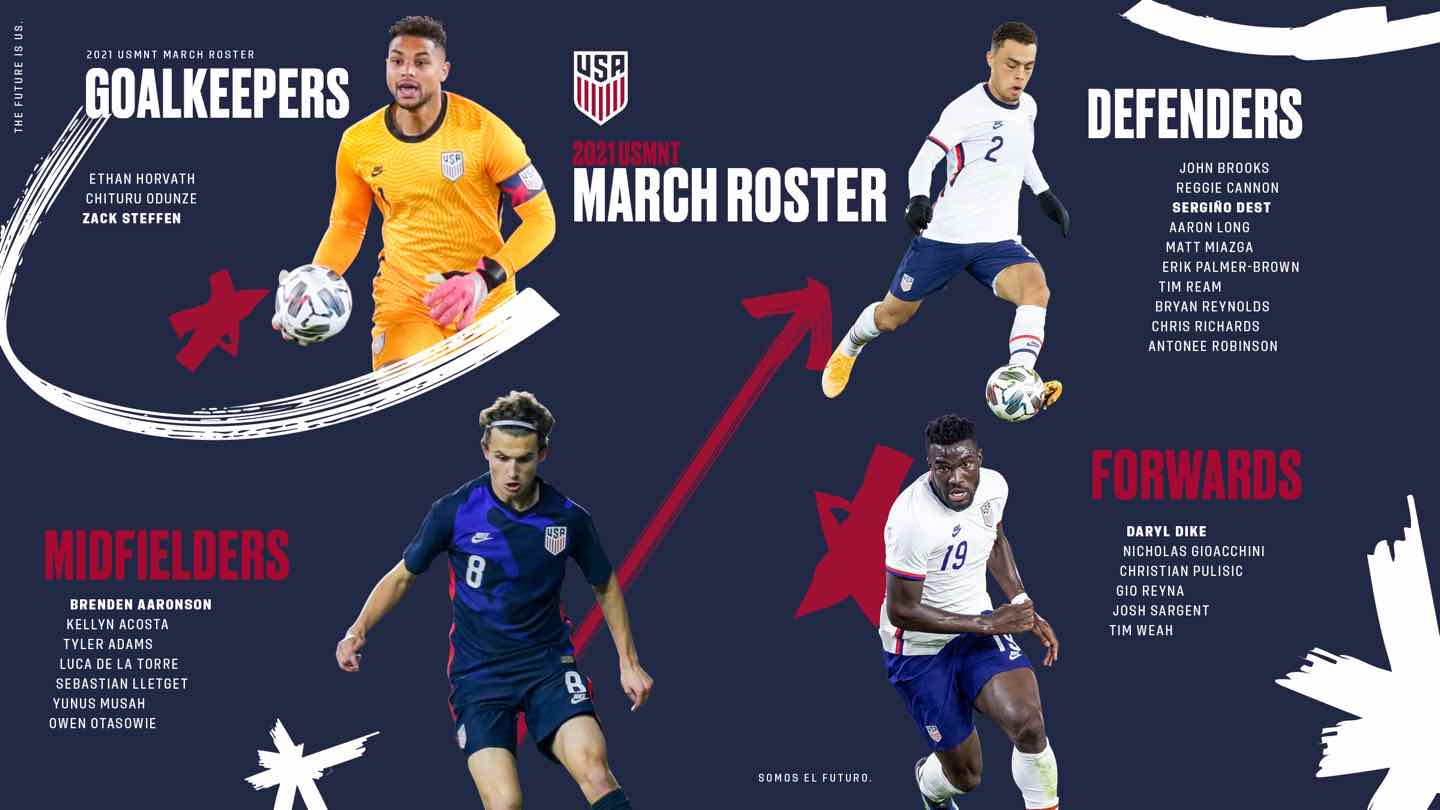 Brenden Aaronson (Red Bull Salzburg), Daryl Dike (Barnsley) and Bryan Reynolds (Roma) are the latest to make moves amongst the USMNT contingent. In the last year, two players have become the first Americans on the first team at international powerhouses Juventus (Weston McKennie) and Barcelona (Sergiño Dest). Right back Reggie Cannon made the jump from MLS to Europe, joining Portuguese Primeira side Boavista, while left back Antonee Robinson has found a Premier League home alongside Tim Ream at Fulham, while center back Matt Miazga is working under the management of Vincent Kompany at Anderlecht.

The primary measurement of success for Youth National Teams isn’t in the win/loss columns. The goal of the programs is to provide a pipeline to the senior team, and by that standard this current USMNT roster can only be judged a success. A total of 14 players in the group have represented the USA at a Youth World Cup:  Acosta, Adams, de la Torre, Dest, Sargent and Weah (U-17 and U-20 World Cup); Miazga, Palmer-Brown, Richards, and Steffen (U-20 World Cup); Odunze, Pulisic, Reyna and Reynolds (U-17 World Cup).

The March window is a lead-in to three significant competitions in 2021, beginning with the Concacaf Nations League final four. Winners of League A’s Group A, the USMNT takes on Honduras in one semifinal, while Mexico and Costa Rica will square off in the other, with the winners competing for the inaugural Nations League title. The matches are scheduled for the FIFA window in the first week of June, with the venues and times still to be determined.