Here are Five Things to Know about the exciting USMNT midfielder:

A player that was also eligible to represent England, Ghana and Italy, Yunus Musah’s ability to play for the USMNT is possible thanks to some fortunate timing.

He came into the world on November 29, 2002, while his Ghanaian mother was visiting relatives in The Bronx, New York City, granting him birthright U.S. citizenship. Shortly after he was born, the family moved to Italy where he began playing soccer. 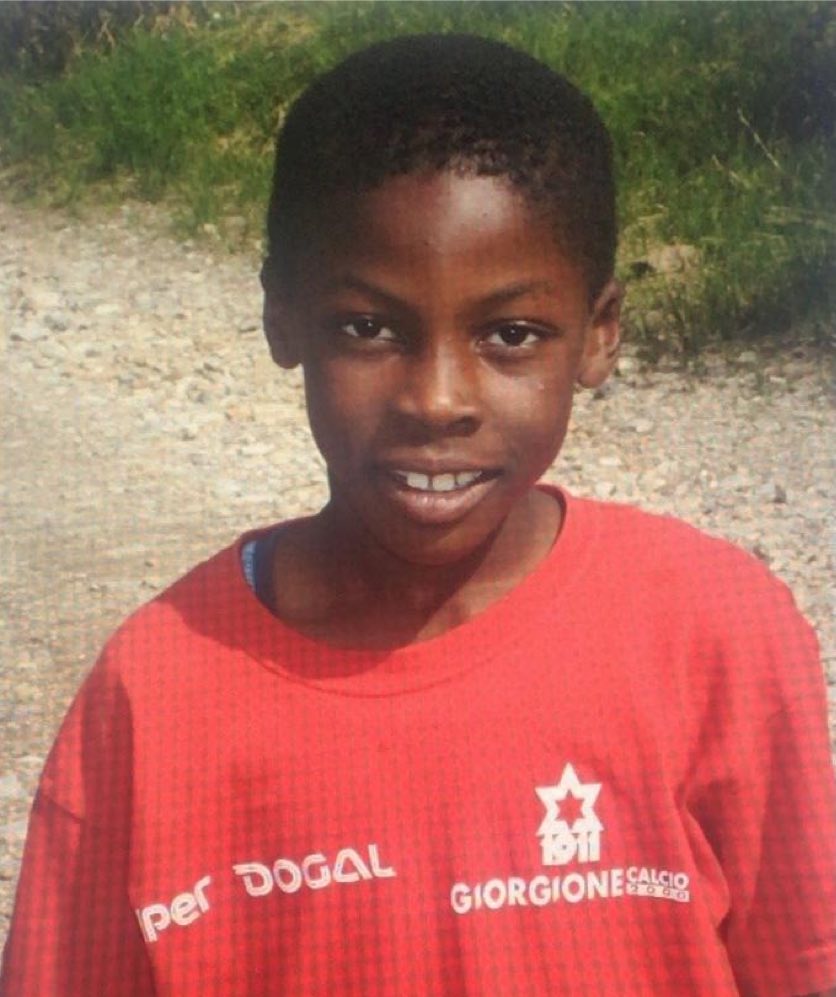 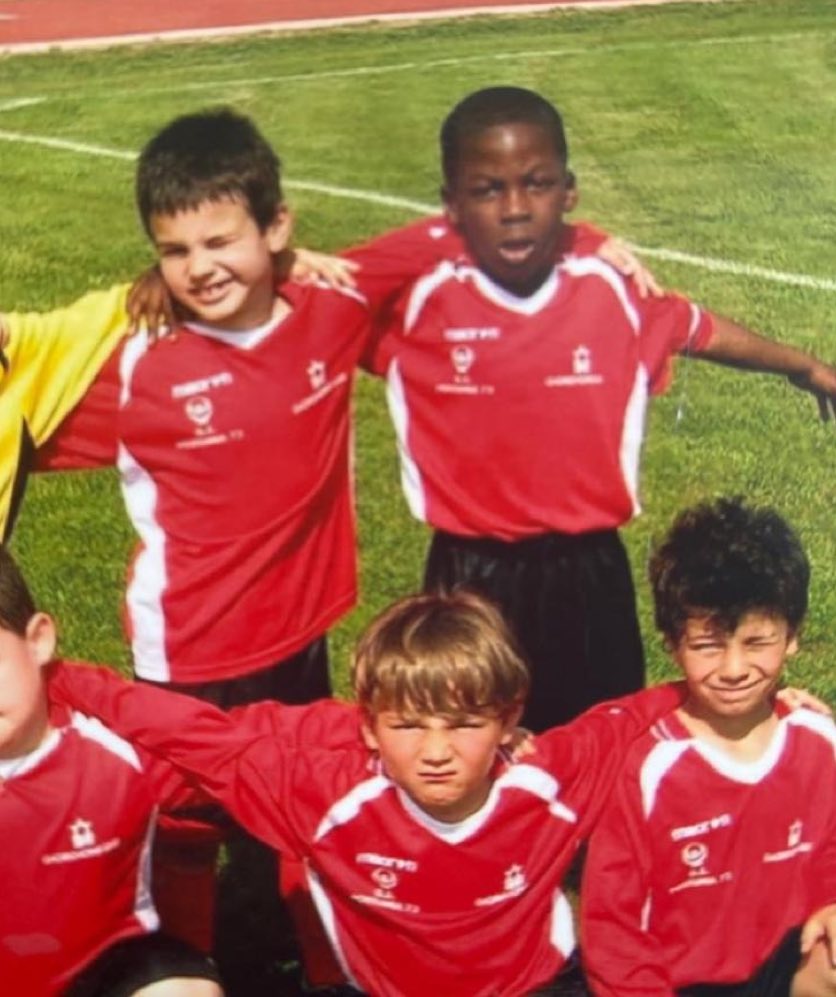 After settling in the northern Italian town of Castelfranco Veneto in northern Italy, the youngster took part in a camp run by local club Giorgione and was soon brought into their youth ranks. Musah showed remarkable ability early on and it wasn’t long before he started playing up with the club’s older age groups.

“He had an incredible progression with the ball, an extraordinary resistance and technique and above all, a smile contagious for all his teammates and coaches in the years spent at Giorgione,” club president Antonelo Orfeo
said of Musah last August.

In 2012 at age nine, the family moved again, this time to east London where Yunus joined the Arsenal Academy. Towards the end of his seven-year tenure with the Gunners, Musah helped the club’s U-18 side to the 2018 FA Youth Cup Final as well as the 2018-19 Youth Premier League South championship.

Though he might have had a future with the first team, he attracted interest from many suitors and elected to sign with Spanish La Liga side Valencia in the summer of 2019.

INTERNATIONAL START WITH THE THREE LIONS

Identified during his time with the Arsenal Academy, Musah began playing for England’s U-15 side in 2016, representing the Three Lions at each subsequent age level through U-18.

During his time with the England U-17s he actually played against the United States on two occasions. The first meeting was in the opening match of the NIKE International Friendlies in Lakewood Ranch, Fla. on Nov. 29, 2017. 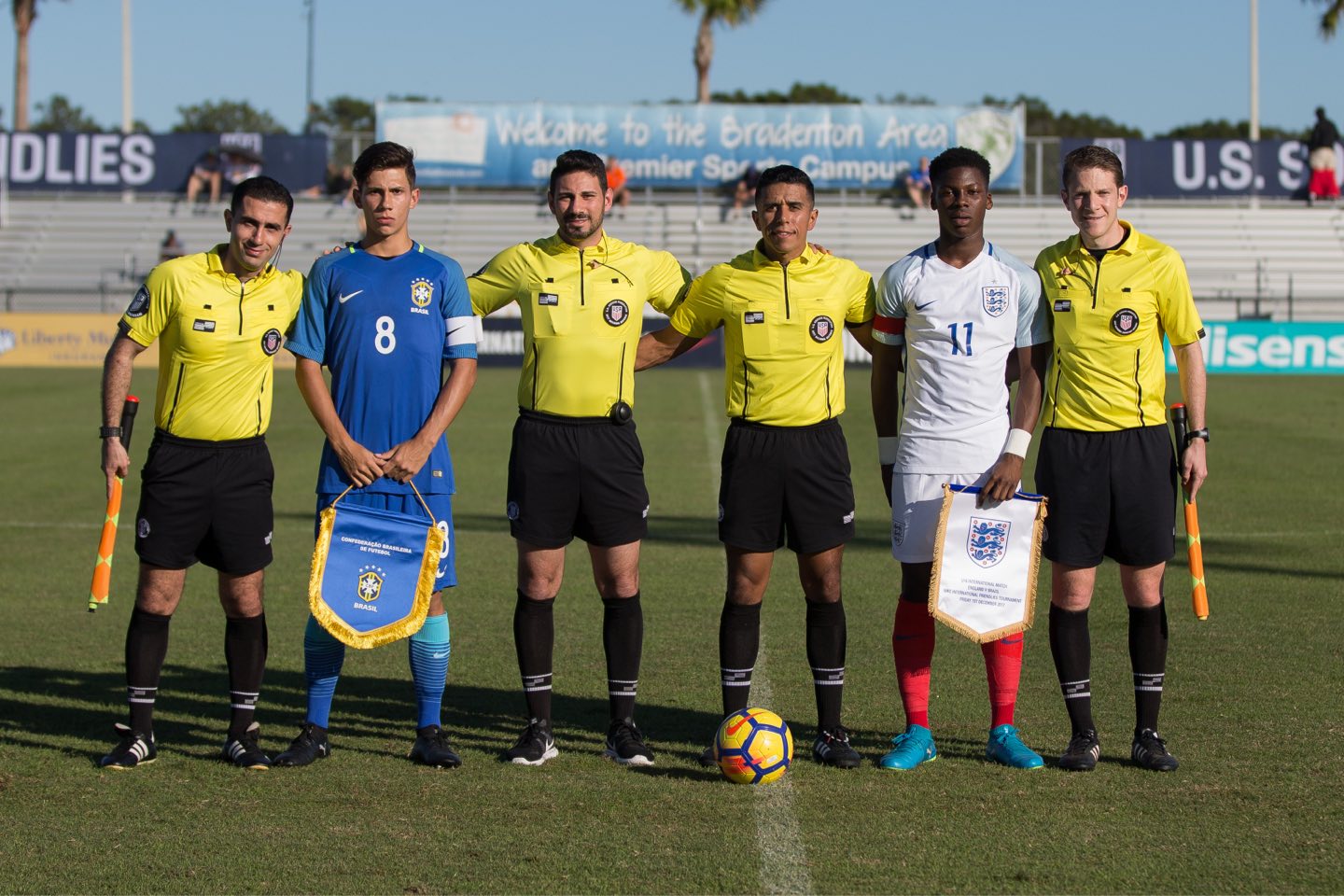 The second meeting against the U.S. came the following year in the opening match of the FA’s U-17 International Youth Tournament held on Oct. 12, 2018 in Chester, England. Largely involved throughout the U-17 cycle, the following May he was selected and assigned the No. 10 shirt for the 2019 UEFA U-17 European Championship but did not appear in any matches as England went out in the group stage.

Had he played in any of the three games he would have been provisionally cap-tied to the Three Lions and would have needed to file a “One-Time Change of Association” request with FIFA to represent any of the other three countries for which he was eligible.

Musah made more than 30 international appearances for England at various age levels, last appearing for the U-18s in 2019.

Upon joining Valencia as a 16-year-old in 2019, Musah was immediately assigned to the club’s reserve side which was playing in the Spanish Segunda Division B. One of the youngest players on the reserve roster, he gained valuable experience in his first professional season, making 17 appearances and scoring one goal.

Following his initial campaign, he was invited to spend the 2020-21 preseason with the first team. Seemingly he made quite an impression as manager Javi Gracia not only promoted him to the main squad but handed the 17-year-old the start in Valencia’s season-opening 4-2 victory against Getafe on September 13, 2020.

"I think that, of course, the credit for what players like Yunus do belongs to the player himself,” Gracia said in his post-match press conference. “There is the maturity of a player. Despite his youth, he has shown unusual maturity and, enduring the time he has been on the field, with the level of demand that he has done, it is something to be applauded and we need to take care of him so that he, in the future, continues to grow and contributes much more to Valencia."

A month-and-a-half later, Musah showed his power and breakaway speed to notch his first La Liga goal in a 2-2 draw with Getatfe on Nov. 1. After Valencia cleared a cross from a short corner, Musah collected the ball and went on a blazing 60-yard run before slotting an effort inside the near post. His first goal came at 17 years, 338 days, making him the youngest non-Spanish player to score for Los Murciélagos.

The teenager hit a top speed of 33.6km/h to score his first goal for @valenciacf_en. 🦇🔥#Mediacoach pic.twitter.com/ij1EQwoxGT

In December, he signed a contract extension that will keep him at La Mestalla through 2026. The 18-year-old is the youngest player in the current Valencia squad and has made 23 league appearances, good enough for second most on the team through 27 matches.

Just days after scoring his first goal for Valencia, Musah was called up to the U.S. Men’s National Team for its November 2020 matches against Wales and Panama.

The opportunity came in part thanks to a fortunate connection between the USMNT technical staff and Valencia, where assistant coach Nico Estevez spent eight years working in the club’s Academy and even served as caretaker manager in 2013. 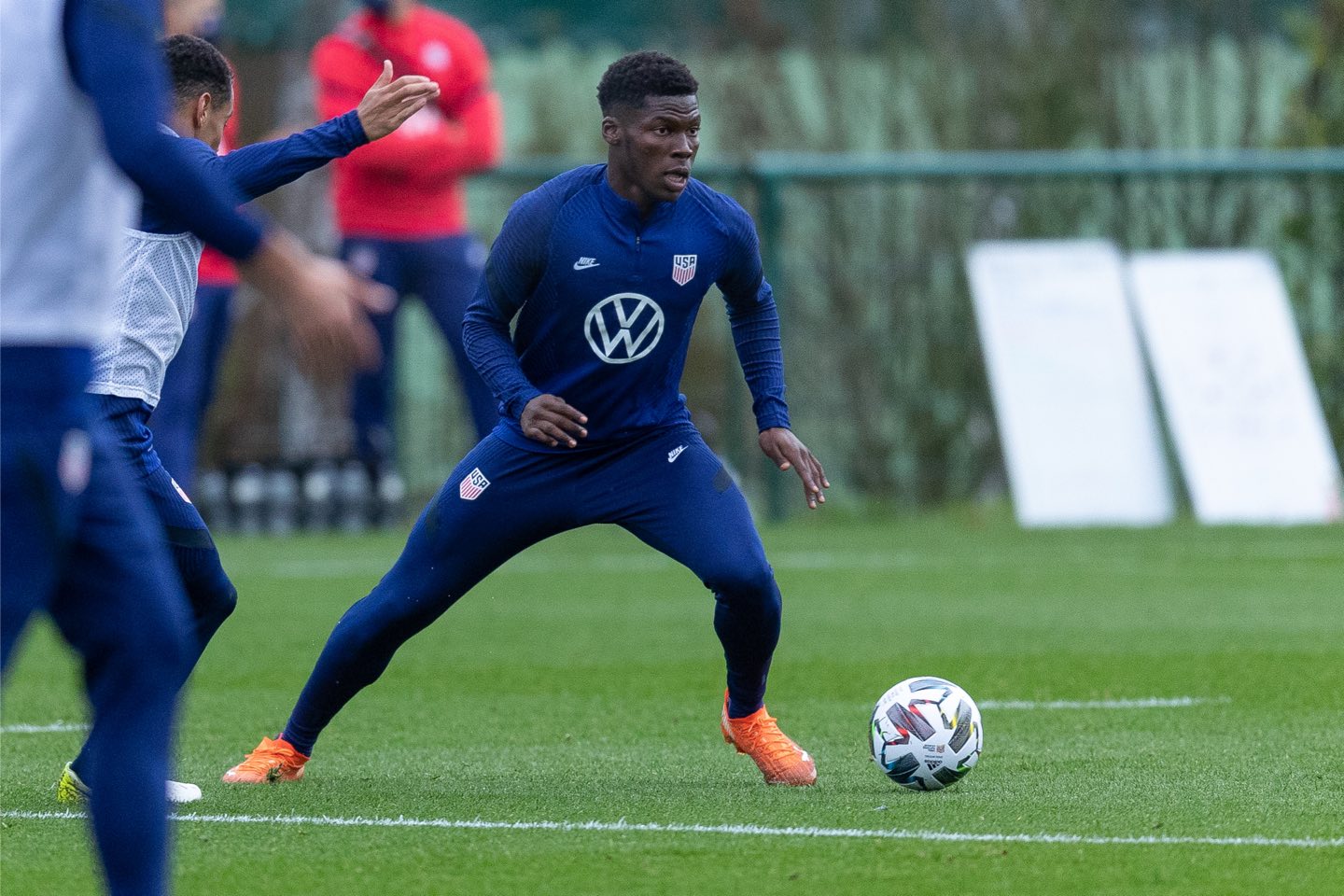 Yunus Musah trains with the USMNT for the first time on Nov. 10, 2020 in Hensol, Wales (John Dorton/ISI Photos)

“As soon as Yunus came into [their] program, we were immediately alerted that he was there,” USMNT head coach Gregg Berhalter said. “From there, we began to communicate with Yunus and support him from afar.”

Musah made his senior international debut for the United States, starting and playing 79 minutes in the 0-0 draw against Wales in Swansea on Nov. 12. In doing so, he joined a small collection of 13 players to appear for the USMNT prior to turning 18 years old. 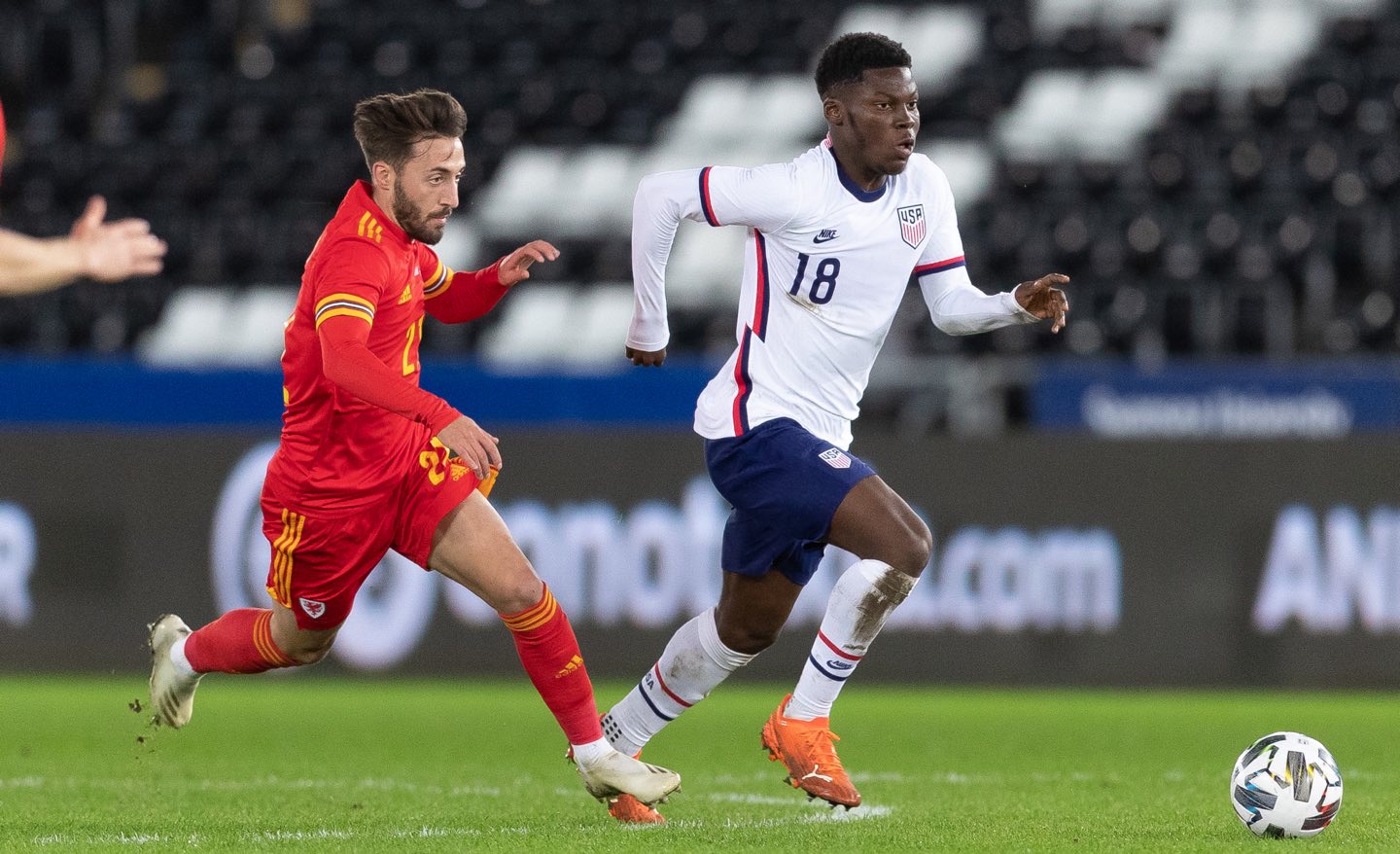 Yunus Musah makes his senior international debut for the USMNT against Wales on Nov. 12, 2012 in Swansea (John Dorton/ISI Photos)

He made more history four days later, becoming the first player under age 18 to start multiple matches for the USMNT, going 76 minutes in the team’s 6-2 win against Panama in Wiener Neustadt, Austria.

While he had played for the USMNT, the quad-national midfielder wasn’t yet locked into the United States. The technical staff stayed in contact with him after the camp, with Estevez spearheading the effort to fully bring him into the program. 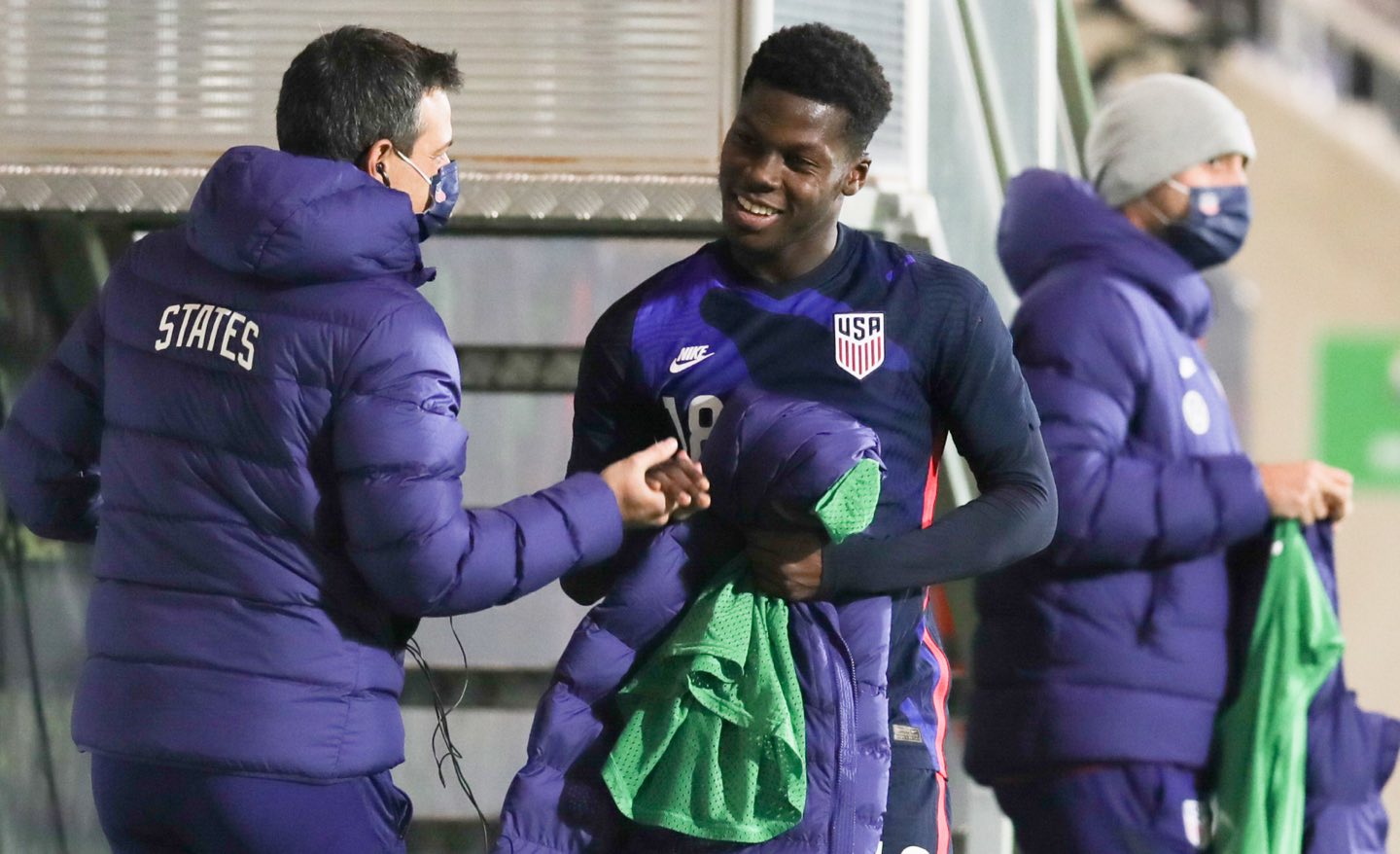 Berhalter continued, “I’ve had numerous conversations with him and his family, telling them about our project and how Yunus can fit in, but Nico was really instrumental in keeping the day-to-day relationship – always talking to him about the training sessions, the games and his performance.”

On March 15, 2020, Musah confirmed he would represent the United States going forward in advance of the USMNT’s friendlies against Jamaica on March 25 in Wiener Neustadt, Austria) and Northern Ireland on March 28 in Belfast.

WATCH: Yunus Musah, Gregg Berhalter on the Decision and What Yunus Adds

WHAT TYPE OF PLAYER IS HE?

Capable of playing in multiple positions, Musah will offer Berhalter options when it comes to picking his lineup.  In his time with Valencia, he’s excelled playing on the right wing in a 4-4-2 setup but started in the three-man central midfield during both USMNT friendlies in November – a spot he’ll likely continue in for the time being. 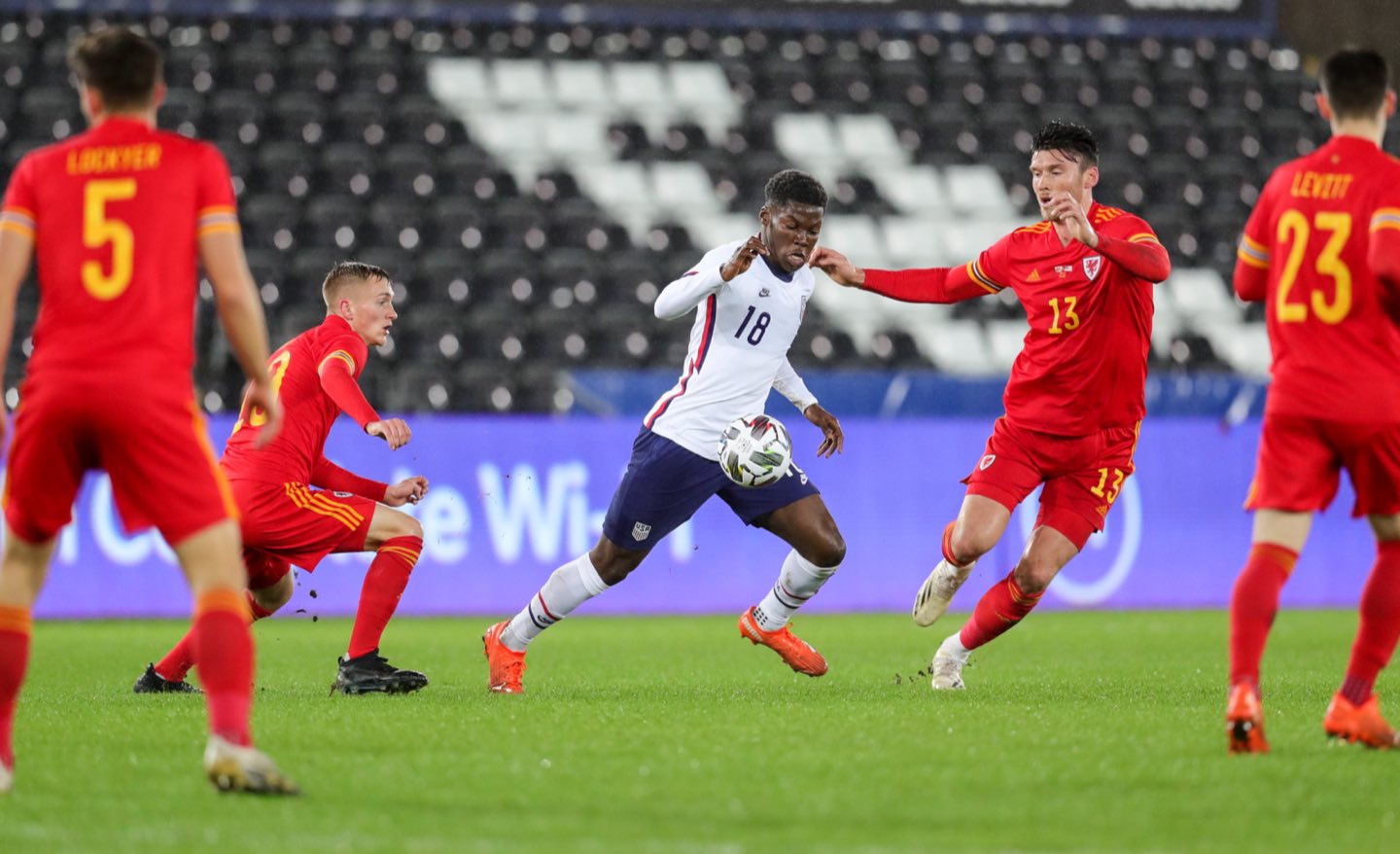 “Yunus is very dynamic,” Berhalter said of Musah’s qualities. “When he accelerates or changes direction or sprints, you see the raw athleticism. To go along with that, he’s very skilled and we see him playing in the attacking midfield type of position. He gives us benefits on both sides of the ball --defensively we know he can close down very quickly and offensively, he’s very mobile, he can get out of problems. He’s technically very good and a player that fits really well into what we’re trying to do.