KANSAS CITY, Kansas (July 18, 2021) – Shaq Moore scored his first career international goal just 20 seconds into the match to lead the U.S. Men’s National Team to a 1-0 victory against Canada and secure the top spot in Group B of the 2021 Concacaf Gold Cup.

With the victory, the USMNT continued their perfect record in group play and set up a quarterfinal clash with Jamaica or Costa Rica on Sunday, July 25 at AT&T Stadium in Arlington, Texas.

With the victory, the USMNT continued their perfect record in group play and set up a quarterfinal clash with Jamaica or Costa Rica on Sunday, July 25 at AT&T Stadium in Arlington, Texas.

With four changes to the starting lineup that faced Martinique on Thursday, the U.S. came out on the offensive and tallied the fastest goal ever scored by a USMNT player in the modern era (1990-present) and the fastest in Gold Cup history.

The quick tally was set up after a loose ball was collected in midfield and played out wide to Sebastian Lletget, who was darting up the left side. Lletget hit a low, one-time cross through the box where Moore was able to bury it home after beating his man to the back post.

The goal was the Tenerife-based player’s first goal for the U.S. National Team in his eighth cap and sent the capacity crowd of 18,467 at Children’s Mercy Park into wild celebrations.

The party atmosphere subsided shortly after when the U.S. found themselves without their captain Walker Zimmerman after he suffered an injury in the 9th minute. Zimmerman went down while attempting to keep Canada’s Richie Laryea from breaking in clean on goal on the right side of the penalty area.

The U.S. kept control of proceedings for most of the first half, but it was Canada that almost earned a quick strike at the start of the second half but U.S. goalkeeper Matt Turner was up to the task. A poor back pass was pounced on by Cyle Larin, and the Canadian striker hit his attempt on goal, but Turner dove low to his right for his first save of the evening.

The Canadians, who finish second in the group despite the loss and also move on to the quarterfinal round, were in the ascendancy for much of the second half, but failed to find the goal they needed to win their eighth game in succession. The U.S., who needed a victory to secure the group, had some nervy moments to contend with near the end when Daryl Dike and James Sands both had to battle through knocks. 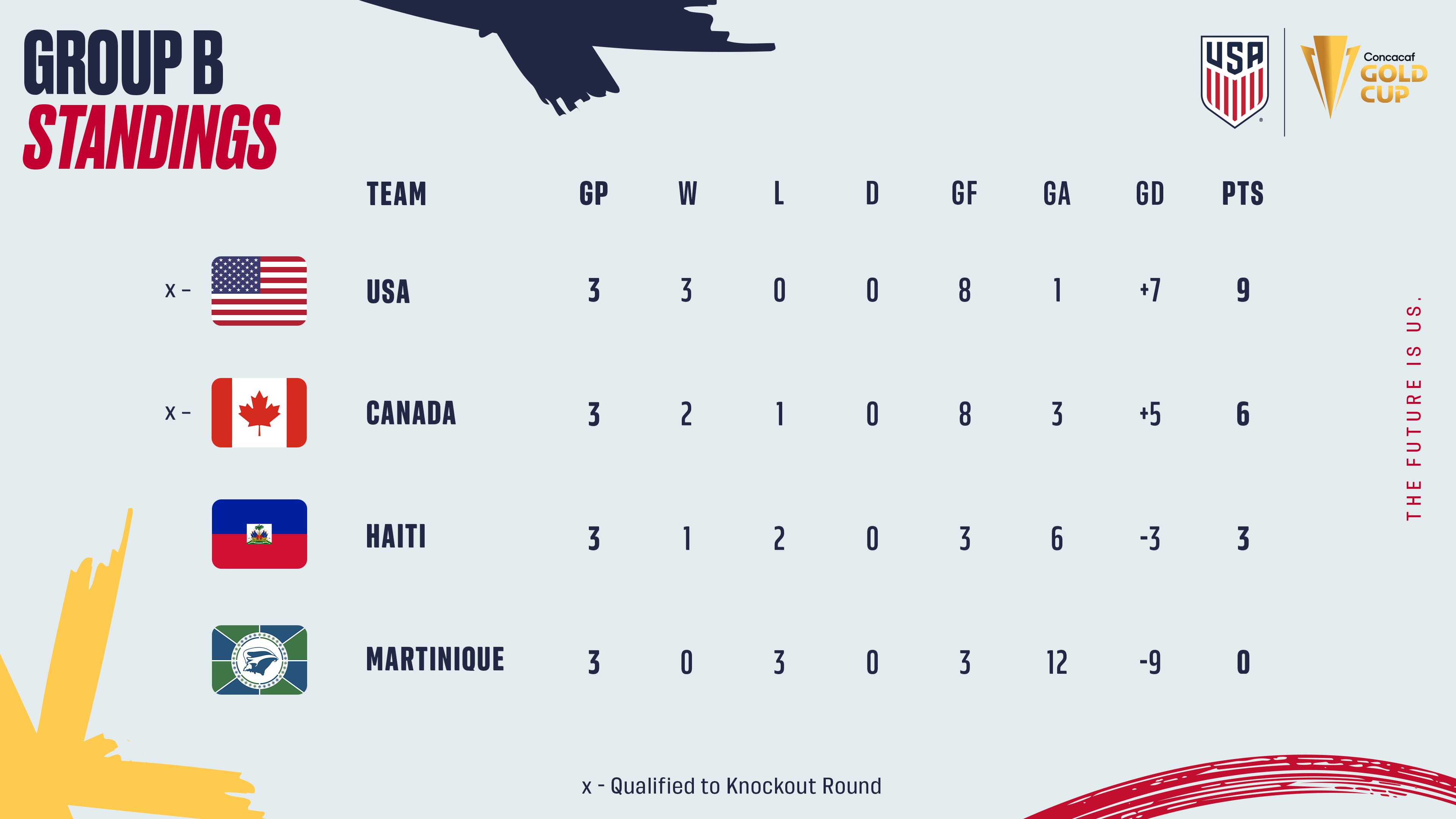 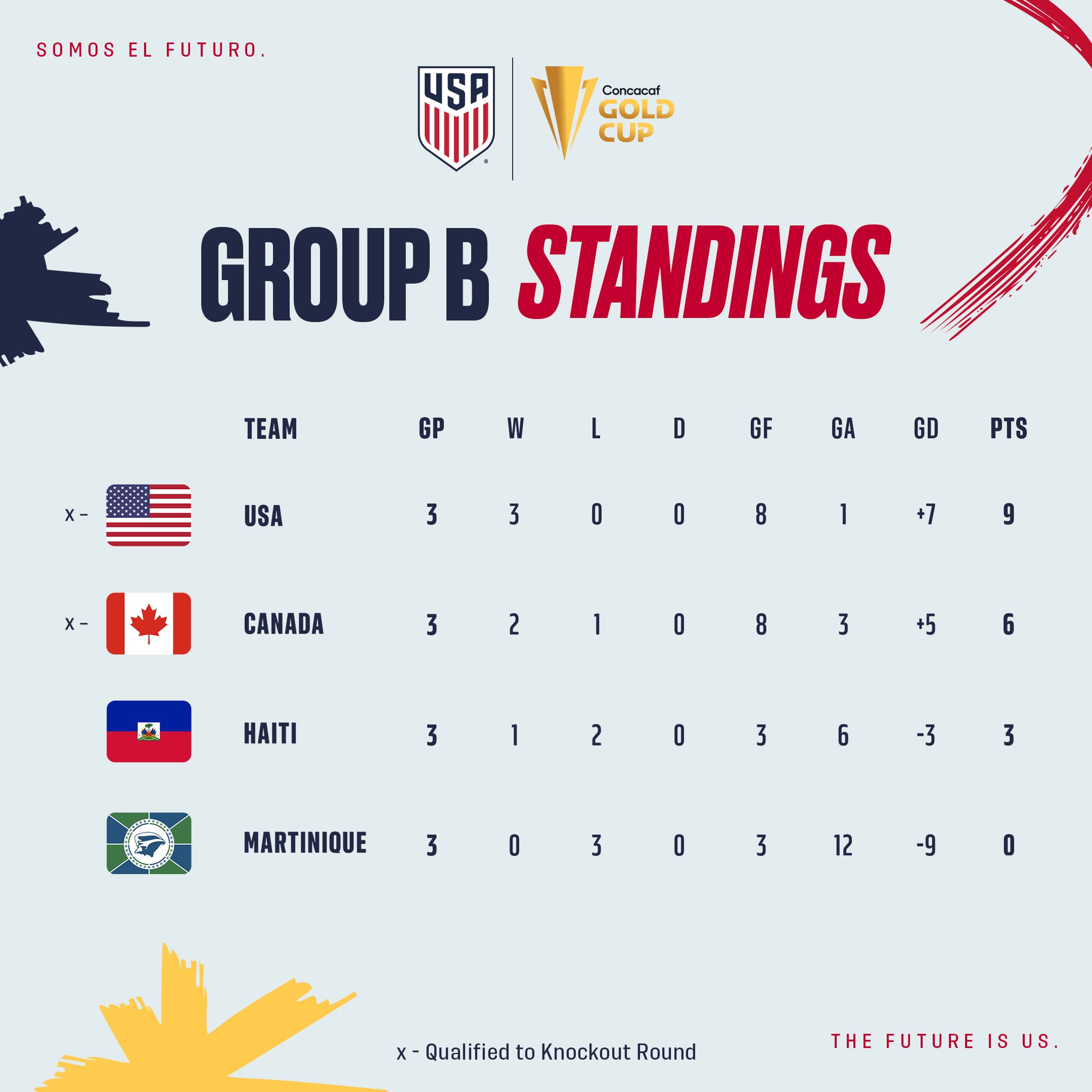 USA – SHAQ MOORE (SEBASTIAN LLETGET), 1st minute: It took just 20 seconds for the U.S. to get on the board with a sensational – and historic – opening goal. Kellyn Acosta took the ball off the toe of hometown favorite Gianluca Busio at the edge of the area in the hosts’ first attack, sending a pass out wide on the left side for a surging Lletget. The LA Galaxy man fired in a low cross that zipped past Gyasi Zardes and was put in at the back post by Moore. USA 1, CAN 0

USA – WALKER ZIMMERMAN, 9th minute: It looked like a goal-saving intervention as USA captain Zimmerman got between the ball and Richie Laryea when the Toronto FC midfielder raced into the American penalty area. But it was a defensive action that came at a heavy price as the U.S. skipper, wearing the armband for a second straight game at this Gold Cup, fell awkwardly and had to be subbed off. The 23-year-old Donovan Pines replaced him in the 15th minute, the D.C. United defender making only his second appearance for the USMNT.

USA – SAM VINES, 40th minute: New England Revolution wide-man Tajon Buchanan had eyes for the U.S. goal when he found himself with a rare pocket of space up the right side. The speedy winger cut inside onto his left foot and let loose a powerful shot that looked like it might have been heading for his club teammate Matt Turner’s top corner, but a sliding block from the 22-year-old Vines kept the USA’s one-goal advantage in tact heading into the locker room for the interval.

USA – SAM VINES, 45+ minute: In a busy period for the young defender at the end of the first half of play, Vines was called into action once more with just seconds to go. Buchanon, once again, was the orchestrator for the Canadians as he poked a hole in the U.S. defense at the edge of the area before flicking in a heel pass for Junior Hoilett, whose miskicked shot bobbled dangerously across the goalmouth. Vines, hip to the danger, got just enough on the ball to clear it away before Alistair Johnston could score at the back post.

USA – Matt Turner, 46th minute: Donovan Pines sent a misguided back-pass from the right side of defense that landed at the feet of Cyle Larin. The Turkey-based Besiktas striker took his time before firing a right-footed shot at the edge of the American penalty area. But Turner, diving low to his right, smothered the effort and grabbed the ball at the second attempt with what was his first save of the game.