The 1990s have a special place in the hearts and minds of today’s soccer fans.

The decade started with the U.S. Men’s National Team return to the FIFA World Cup for the first time in 40 years, then hosting the most successful World Cup in history four years later.

More than a dozen players from those teams have been inducted into the National Soccer Hall of Fame, and many remain involved in the game.

During U.S. Disability Soccer Month, we look back at another program that traces its ‘start’ to the 1990s and another athlete who may one day join the U.S. Soccer greats honored in Frisco, Texas: Josh McKinney and the U.S. Para National Team.

“The first time - pretty much, the only time - I competed against someone with disabilities was on the Paralympic Team,” McKinney told ussoccer.com by phone from his home in Raleigh, North Carolina.

Born with cerebral palsy that affects his right side, McKinney, a West Virginia-native, grew up in Hilton Head Island, South Carolina playing soccer on teams made up of only able-bodied players. It was always a challenge, but never a detriment.

“My first couple years on club, when I was 12-13, it was kind of difficult being on the team,” he said. “I got maybe five minutes of playing time in a game. Three years later, after I figured out how to stay on the field, I was starting every game.”

That confidence continued onto his high school team, and soon enough, to the international stage.

In 1995, the then 16-year-old saw an ad in a Eurosport Magazine announcing tryouts for a disabled national soccer team. He sent in a video and was soon invited to join Team USA at the 1995 CPISRA Pan-American Games in Mar del Plata, Argentina. The USA defeated Brazil 5-4 in the tournament opener, with McKinney scoring four goals.

“It was a great experience,” McKinney recalled. “I was 16 and didn’t know what to expect - it was the first time I had ever competed against someone else with a disability.”

There was reason for excitement, not just for him, but for the team.

The 1992 Paralympic Games in Barcelona were the first time the U.S. fielded a Para National Team. Things did not go well for the 7-a-side squad, as the USA lost all three games by a combined 14-0 to the Netherlands, Great Britain and Brazil.

The 1996 Games were in sight, and there was reason for optimism with the competition taking place in Atlanta.

“My family didn’t get to watch me very much because we didn’t have many games in the U.S., and when we did they were in California,” McKinney said of the preceding months of preparation. “So those games were special. Everyone’s family was there, and there were crowds at each game, which made it pretty exciting. And we played well.”

Brazil was again the USA’s first opponent, and took an early lead before conceding an own goal before the half. McKinney would put the U.S. up with two goals after the break before Eli Wolf sealed the 4-1 win. It wasn’t just family and soccer fans watching - also in the stands was a Brazilian legend by the name Pelé.

“We actually took a team photo with (Pelé) before the game and got to shake his hand,” McKinney said. “It was thrilling to score against Brazil, but it was made even more special when I found out he stayed to watch the game.”

The USA advanced to the medal round with a win over Ireland, but fell to Spain, 1-2, in the Bronze Medal match. McKinney finished with five goals and the fourth-place finish remains the USA's best in the Paralympics.

McKinney went on to play at Concord University and eventually became the Para National Team captain - helping the group qualify for the 2004 Athens and 2012 London Paralympic Games, place second at the 2010 Copa America and stand out in other international competitions.

He would go on to earn 124 caps while scoring 81 goals before ending his 19-year international career in 2014 after leading the PNT to a 3-0 win over Portugal at the International Trophy of 7-a-Side Football Tournament in Barcelona, Spain.

“It was probably the perfect time for me to go,” he said. “With a new staff and new players coming in, and obviously, being 35, I was getting to the age where I was not quite as fast as I used to be. But also having arthritis in both ankles slowed me down as well. To be honest, I couldn’t have played much longer, even if I tried. With the arthritis, I could go one day, but then couldn’t run the next.” 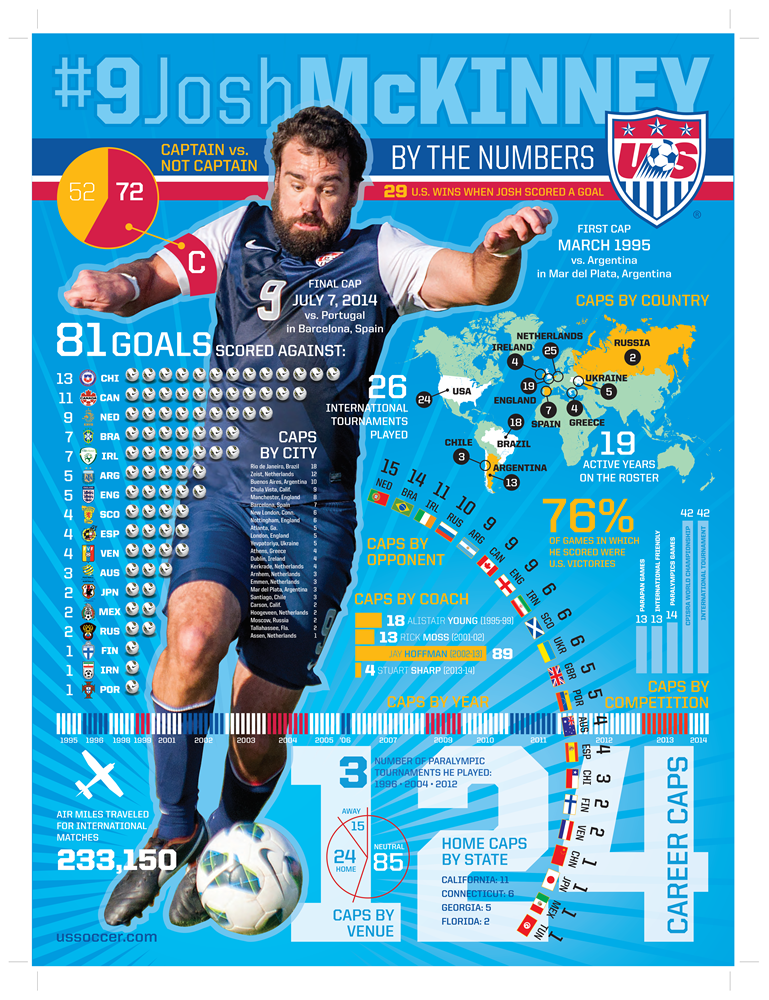 Since retiring McKinney has remained involved in the game and is currently coaching Under-11, U-12 and U-13 boys teams at North Carolina Football Club in Raleigh.

“It wasn’t until the last couple years that I was playing that I really wanted to get into coaching and continue after I stopped,” he said. “It was one of those things that I didn’t want to completely get away from the game. I really like coaching and giving back. Playing on the Paralympic team, the game gave back so much to me. I was able to travel and compete, meet people from around the world with similar disabilities.”

While he coaches able-bodied kids, a few years ago McKinney joined former PNT teammate, the late Jon McCullough, in conducting clinics for disabled soccer players in the Washington D.C. area. He’s now exploring how he can be involved in bringing a CP (Cerebral Palsy) Soccer program to Raleigh.

All along, he’s remained a supporter and believer in the Para National Team.

“I definitely keep track,” he says. “It’s definitely exciting to see the progress that they’ve made, and getting more guys into camps, which in return raises the level of play.

“You can see that in the results, obviously. When they are able to beat the Iran’s and Brazil’s on a more consistent basis, you can definitely tell that the progress is there, which is exciting. The young guys there now, there’s a few that are definitely going to be really good when they get older.”

Like many star players from the ’90s, staying in top shape these days can be painful, especially with a weak right leg and arm. But McKinney may one day have another thing in common with the greats from his era.

Last year, the National Soccer Hall of Fame announced revised election procedures and updated qualification eligibility. In particular, they created a path for athletes from the Extended National Teams - which includes Para, Futsal, and Beach Soccer - to one day be inducted into the Hall of Fame. McKinney was named to the final 20-player ballot for both the Class of 2021 and upcoming Class of 2022.

“It’s definitely great news for all athletes within the ENTs to get that recognition for competing for the U.S.,” McKinney says. “Hopefully within a couple years someone from the ENTs gets inducted.”

McKinney has already been inducted into the West Virginia Soccer Association Hall of Fame and the North Carolina Soccer Hall of Fame, which also includes the likes of Mia Hamm, Tab Ramos, Carla Overbeck, Cindy Parlow Cone and Eddie Pope, among others who represented the U.S. at the highest levels.

That honor is one he’ll never forgot.

“Getting to represent your country, it’s great,” he says. “Everyone who competes in soccer, that’s kind of their dream. Being able to do that for so long was great. I definitely had the support behind me with my parents and brothers to be able to compete for such a long time, even when I was working and playing at the same time, they were behind me helping me out.

“I loved every minute of it - going out, traveling, getting to compete against other countries, representing the U.S. - it’s one of the best feelings you can get, especially when that’s your dream.”