For the first time, the process for selecting the BioSteel Female and Male Player of the Year as well as the Chipotle Young Female and Young Male Player of the Year awards will be opened up to fans via ussoccer.com. The fan vote will account for 15 percent of the overall tally, with the rest coming from National Team players, coaches, media and other related constituencies. 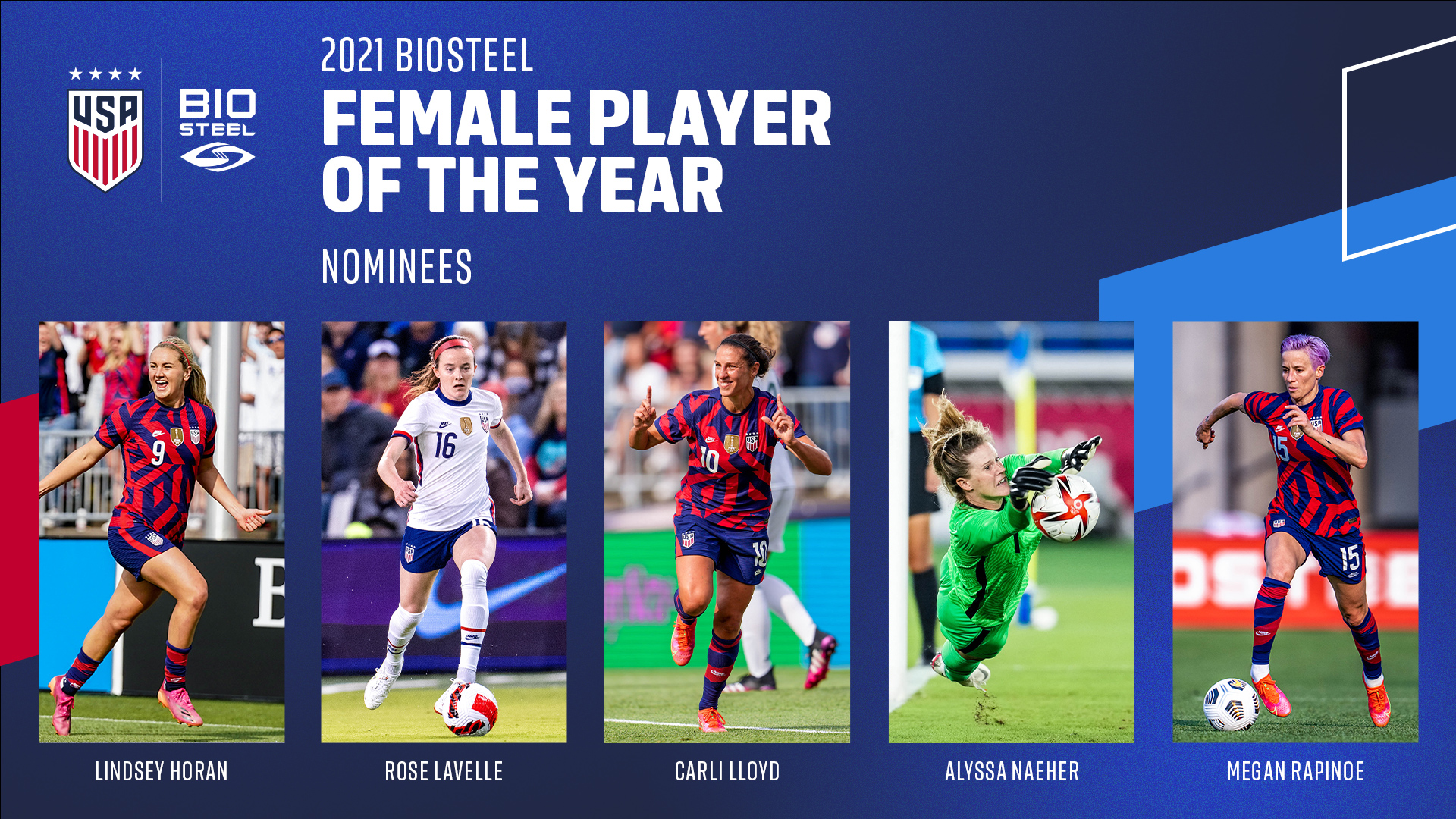 BIOSTEEL FEMALE PLAYER OF THE YEAR

The USWNT’s five nominees factored heavily in the USA’s run to the bronze medal at the delayed Tokyo 2020 Olympic Games. In her final year with the USWNT, Lloyd went out with a bang, finishing her career with 316 caps, the second-most in the history of international soccer. Lloyd led the team in scoring with 11 goals, the oldest player to ever do so (breaking her own record, set in 2019), recorded a team-high six assists and tied a record for most goals in a game when she netted five times against Paraguay in September. The only returning nominee from 2020, Horan led the team in minutes played this year and earned her 100th cap during the Olympics.

Lavelle featured prominently for the USA at the Olympics, playing in all six games, and set career-highs with five goals and 22 matches played this year. The midfielder has accounted for four of the USA’s 18 game-winning goals since the team resumed play in November 2020.

Naeher was also a standout performer in Tokyo, highlighted by saving one penalty kick in regulation and two in the shootout against the Netherlands in the Olympic quarterfinal. Nominated for FIFA Best Women’s Goalkeeper of the Year, Naeher set a U.S. record with a streak of 10 straight shutouts before suffering a knee injury in the Olympic semifinal. Rapinoe enjoyed another year of highlight-reel goals, including two spectacular strikes in the bronze medal match at the Olympics during a campaign that saw the forward net 10 tallies and add three assists.

Lloyd is the lone player to have previously won the award, winning in 2008 and 2015.

The U.S. Soccer Female Player of the Year has been awarded since 1985, when midfielder Sharon Remer (known then as Sharon McMurtry) earned the inaugural honor. Abby Wambach holds the record by winning the award six times. Mia Hamm won it five times. Midfielder Julie Ertz has won it twice in the past three years, in 2017 and 2019, while forward Alex Morgan won it in 2018, which was her second time winning. 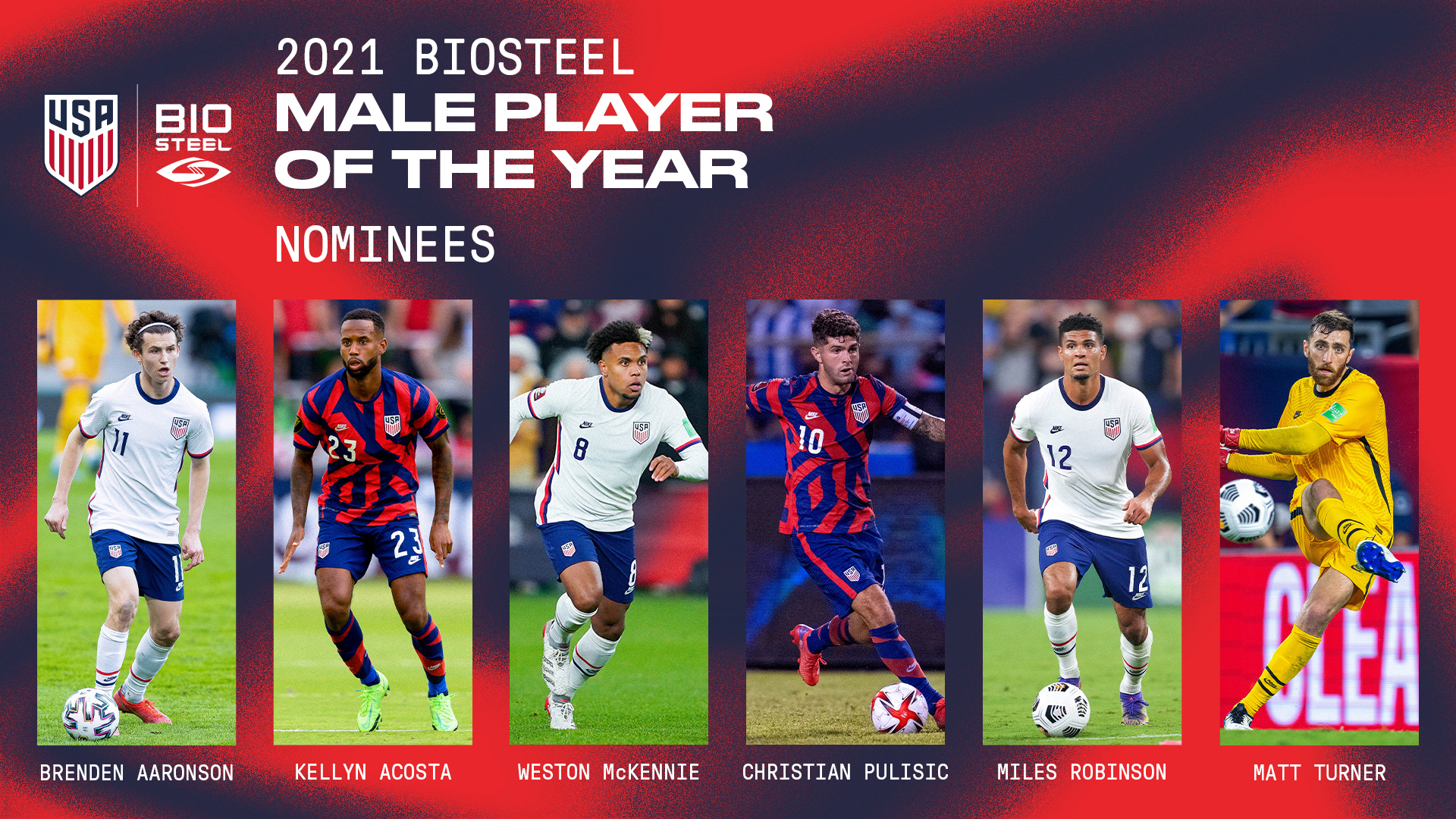 BIOSTEEL MALE PLAYER OF THE YEAR

All six male nominees made significant contributions in a milestone year for the USMNT that featured a record-tying 16 victories, two continental titles won against archrival Mexico and a strong position through eight games of World Cup qualifying.

Aaronson was one of the team’s most consistently productive players in 2021, with his four goals and three assists leading all USMNT players in goal contributions. Both previous winners of the award, Pulisic and McKennie delivered in a big way in two crucial matches against Mexico this year, with McKennie netting a late equalizer and Pulisic scoring the unforgettable game-winning penalty in the Concacaf Nations League Final, while the pair combined for two goals in a 2-0 “Dos a Cero” victory against El Tri in Cincinnati this November.

On the club side, Pulisic also became the first U.S. man to play in and win the UEFA Champions League with Chelsea this spring. Turner and Robinson enjoyed breakout campaigns with the USMNT, leading the team to the 2021 Gold Cup championship.

Turner won the Golden Glove as the competition’s best goalkeeper while Robinson headed in the overtime game-winning goal vs. Mexico in the tournament final. Together, the pair played every minute of the Gold Cup’s six games while allowing just one goal.

After some time away from the National Team, Acosta continued a renaissance of his international career in 2021 as one of three players to lift both of the USMNT’s summer trophies and playing in 20 overall matches – the most by a USMNT player in a calendar year since Landon Donovan in 2002.

McKennie won the award last year, while Pulisic became the youngest player to earn the honor at just 18 years old in 2017 before winning again in 2019. Aaronson, Acosta, Robinson and Turner each earned their first nominations for the award this year.

The U.S. Soccer Male Player of the Year has been awarded since 1984 when Rick Davis won it. Current U.S. Soccer Sporting Director Earnie Stewart won it in 2001. Landon Donovan holds the record for most awards, winning it four times, while Clint Dempsey won it on three occasions. 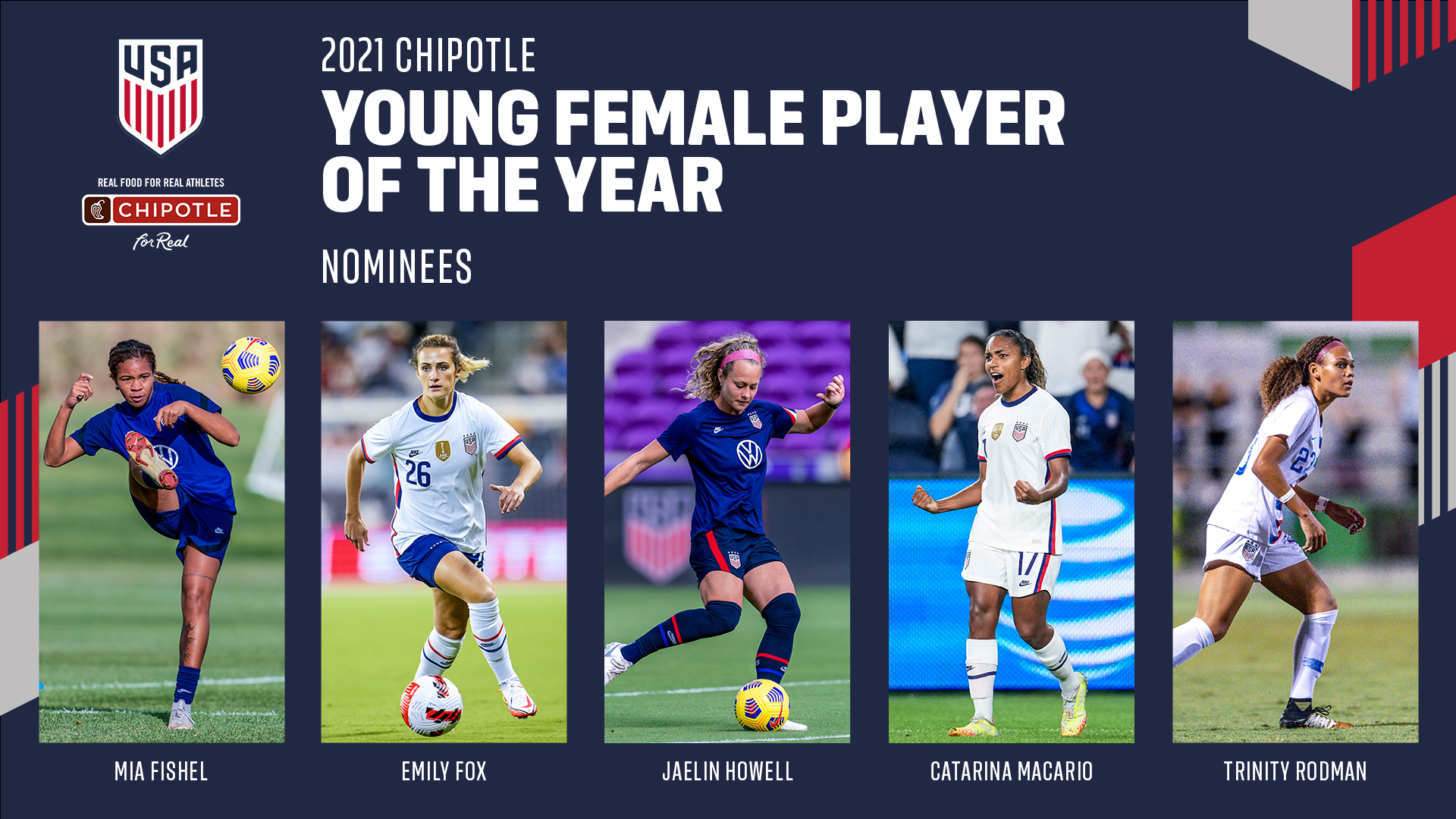 With no Youth national Team activity in 2021 due to the global pandemic, nominees for the Chipotle Young Female Player of the Year were eligible if they are 23 years old or younger and played in a senior USWNT match this year or played in the 2020 Concacaf U-20 Women’s Championship. The group includes two young professionals on the rise in the National Women’s Soccer League and one in Europe - defender Emily Fox, forward Trinity Rodman and midfielder Catarina Macario.

The No. 1 pick in the 2021 NWSL Draft, Fox played in four of the USWNT’s six fall friendlies, highlighted by strong performances against Australia to end the year, winning Budweiser Woman of the Match in the team’s final contest of 2021 against the Matildas.

Macario earned her eligibility to play for the U.S. in January and enjoyed an excellent first year with the National Team, playing in 12 matches while contributing three goals and an assist. The 22-year-old plies her trade abroad for French powerhouse Olympique Lyon and has scored 10 goals this calendar year, including a team-leading seven league tallies thus far in the 2021-22 season.

The youngest player to be drafted in NWSL history, Rodman put on a stellar season with league champion Washington Spirit, scoring six goals and a league-leading six assists while earning Rookie of the Year honors. Last year, the forward starred for the U-20 USWNT at the Concacaf U-20 Women’s Championship.

Midfielder Jaelin Howell won the 2020 MAC Hermann Trophy as the country’s top college player and once again had a standout season for Florida State, dominating the middle of the field while leading the Seminoles back to the College Cup. After making her USWNT debut in November 2020, Howell was called up to the senior team twice this year and was named first team All-American, ACC Midfielder of the Year and a semifinalist for this year’s Hermann trophy.

The other collegiate nominee is UCLA forward Mia Fishel, who led the Bruins in scoring during an impressive undefeated regular season campaign. The 20-year-old was named First Team All-Pac-12 as she scored 12 goals and added five assists before announcing her intentions to turn professional this winter. 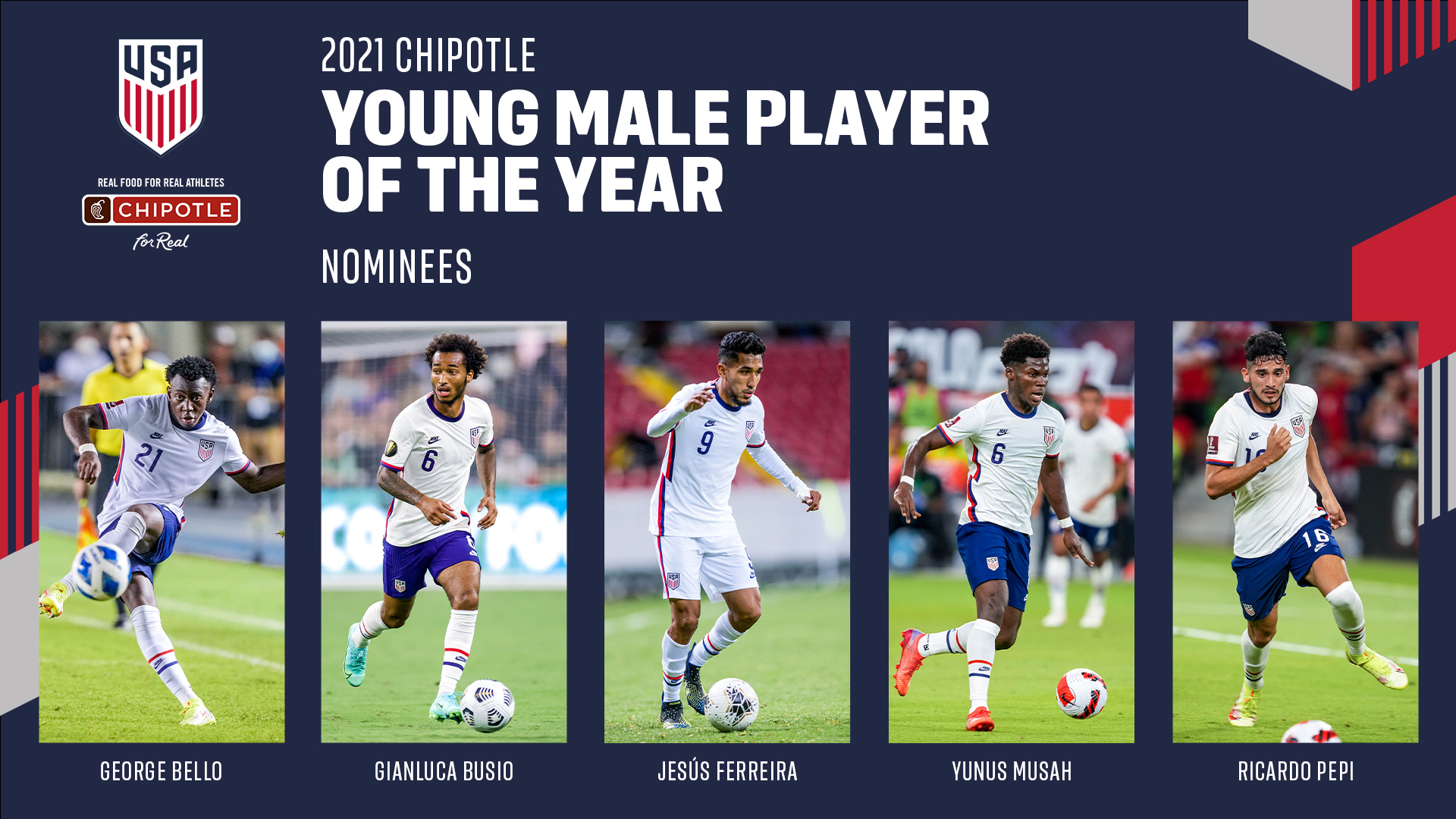 The Chipotle Young Male Player of the Year Award field showcases a number of the USMNT’s rising stars who had excellent years for club and country. A set of three former U-17 USMNT teammates all made their senior team debuts this year in defender George Bello, midfielder Gianluca Busio and forward Ricardo Pepi. Bello and Busio played key roles for the USMNT during the run to the 2021 Gold Cup championship. Bello installed himself as a regular for Atlanta United FC while Busio’s standout play with Sporting Kansas City earned him a move into the starting lineup of Serie A’s Venezia.

Pepi made one of the most impressive USMNT debuts in recent memory at Honduras during September World Cup qualifying, sparking a second-half comeback victory with a hand in all four of the USMNT’s goals. He went on to play in the rest of the USA’s fall qualifying matches, adding a brace against Jamaica on Oct. 7 while winning Major League Soccer’s Young Player of the Year Award.

Fellow FC Dallas forward Jesús Ferreira rebounded from a disappointing 2020 to come on strong this season, returning to the USMNT fold with a two-goal, three-assist performance against Trinidad and Tobago in January and as a leader during the U-23 USMNT’s Concacaf Olympic Qualifying Championship, before ending the year with appearances in both of the team’ November World Cup qualifying matches.

Valencia midfielder Yunus Musah tied his international future this spring to the USA after bursting onto the scene in 2020 and logged his first two USMNT assists while playing a key role in the U.S. midfield during World Cup qualifying. 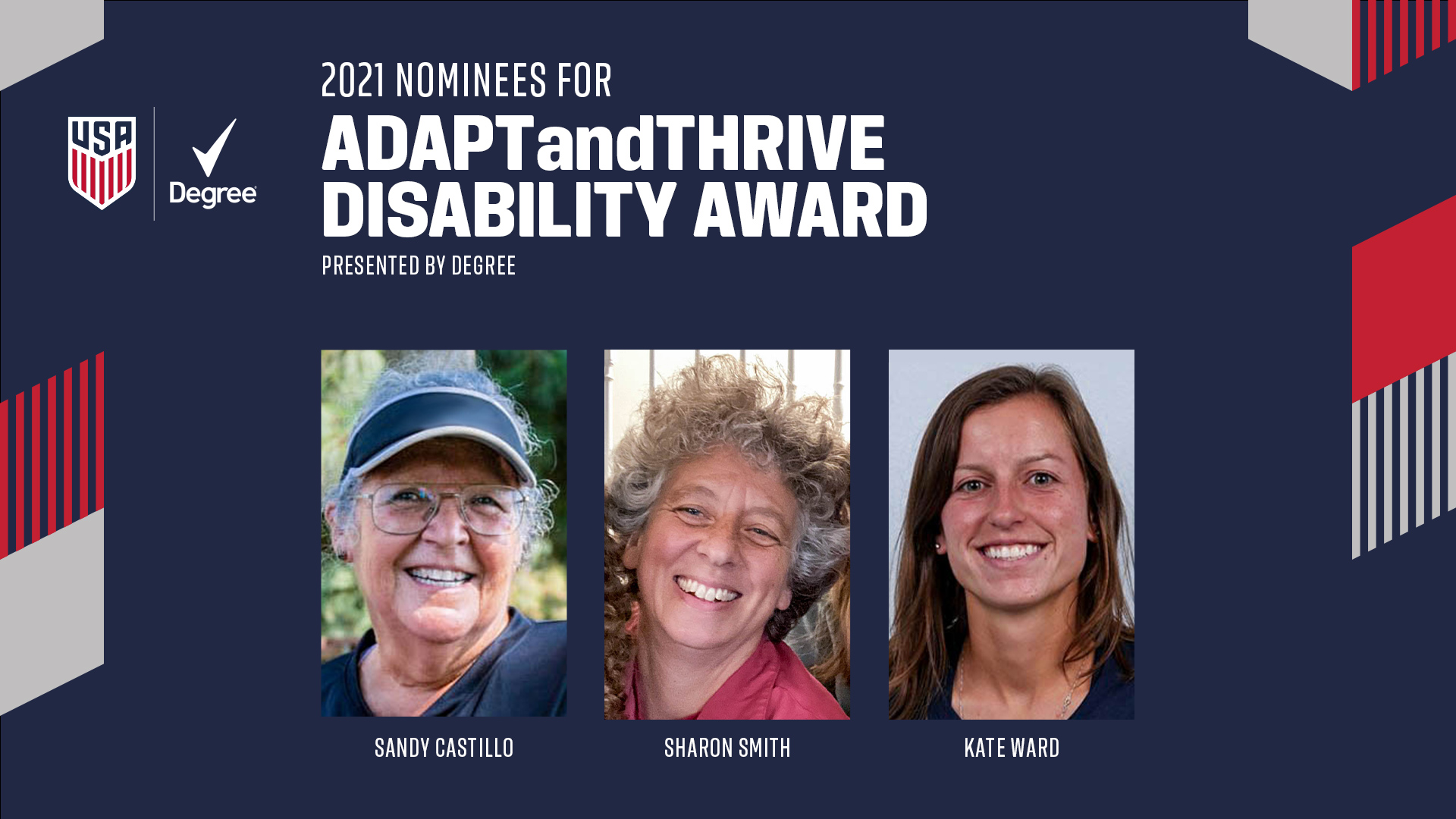 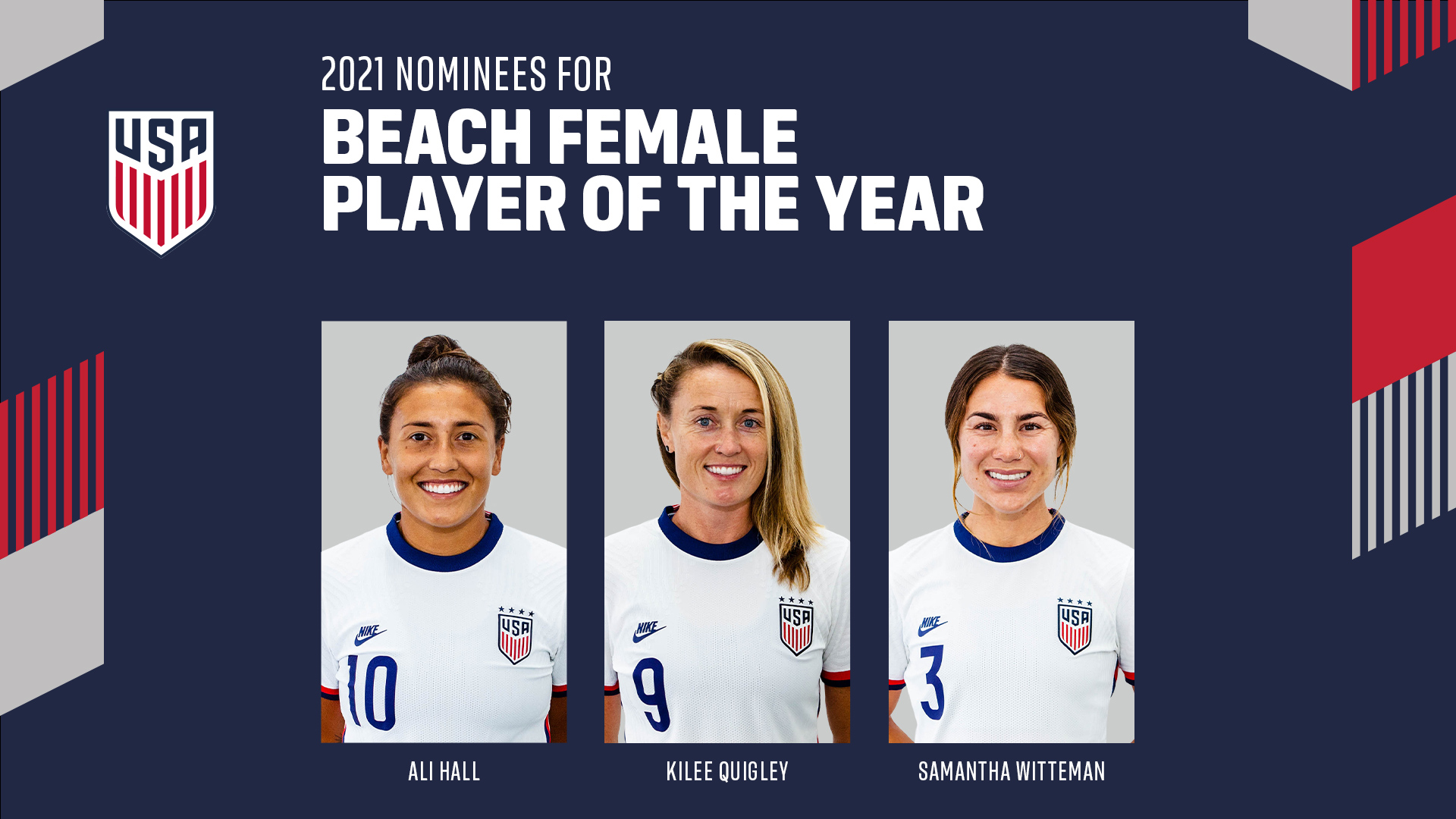 The field for Beach Female Player of the Year features forwards Ali Hall, Kilee Quigley and Samantha Witteman. Hall bagged a brace for the U.S. at the Women’s Intercontinental Beach Soccer Cup in Moscow this summer, starting all three matches. Quigley also played in all three matches in Moscow, while Witteman has appeared in all nine matches in program history and leads the team in scoring all-time with eight goals. 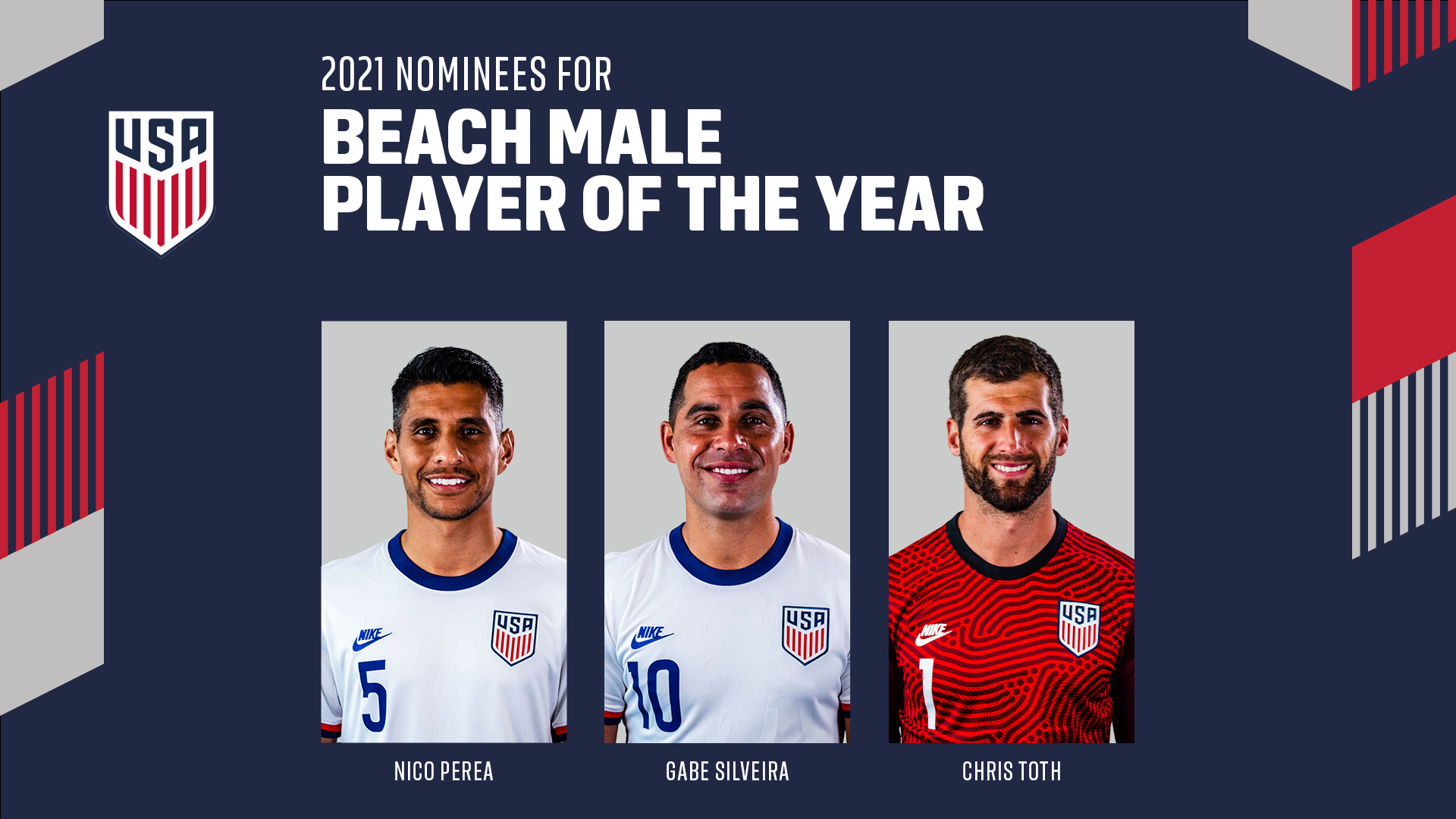 The three nominees for Beach Male Player of the Year all made significant contributions to the team’s runner-up finish at the Concacaf Beach Soccer Championship and appearance at the Beach Soccer World Cup. Defender Nicolas Perea played 11-a-side soccer professionally before making his international beach soccer debut this year and contributing eight goals for the Beach USMNT. Forward Gabe Silveira led the team in scoring at the World Cup with five goals including a brace in the opener against host Football Union of Russia. Considered one of the best beach soccer goalkeepers in the world, veteran Chris Toth was a standout backstopping the team this year and added two goals of his own at World Cup qualifying. 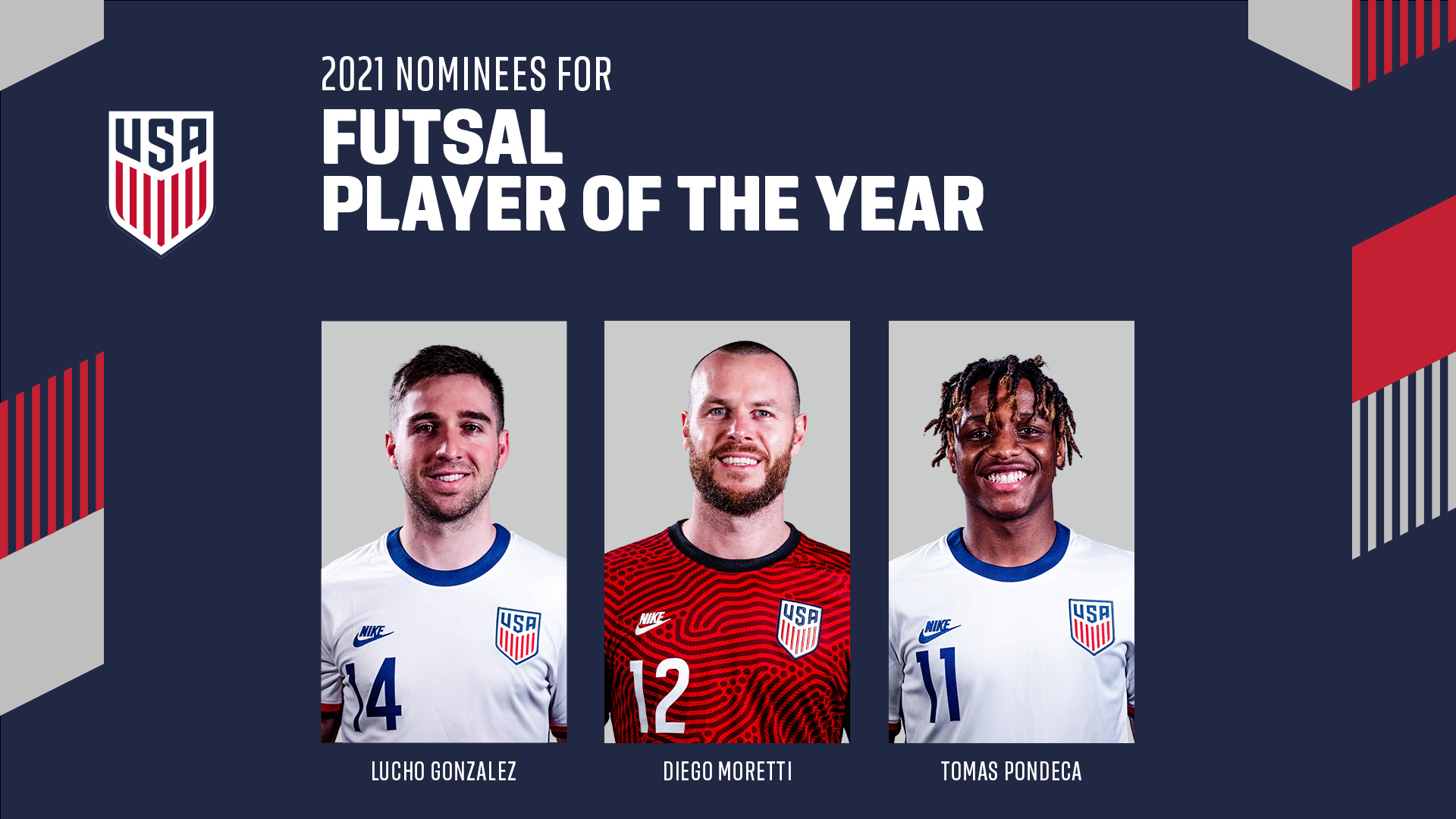 After a three-year layoff, the Futsal National Team resumed play in fall 2019 and the three nominees for Futsal Player of the Year are all European-based players who contributed significantly to the program’s return to the world stage this year. Born in Argentina, Luciano Gonzalez, who plays the ala position, which is akin to a winger, led the team with a combined five goals and assists at the 2021 Concacaf Futsal Championship, helping the U.S. clinch its berth to the World Cup. Captain and goalkeeper Diego Moretti provided a steady veteran presence for the U.S. in the net during its resurgent cycle after a long professional career in Italy. Nineteen-year-old Tomas Pondeca, also an ala, is one of the team’s brightest prospects, taking home Young Player of the Tournament at World Cup qualifying.

The One Nation. Social Impact Award will be awarded to an athlete who has made a significant off-field contribution, having a positive impact in their communities and in the advancement of diversity, equity, inclusion and belonging. The nominees were selected by the U.S. Soccer Athlete Council. The final award recipient will be selected by the 2021 U.S. Soccer Game Ambassadors – non-USSF staff, non-current athletes and community members who are driving positive change within communities in which the National Teams have competed this calendar year. 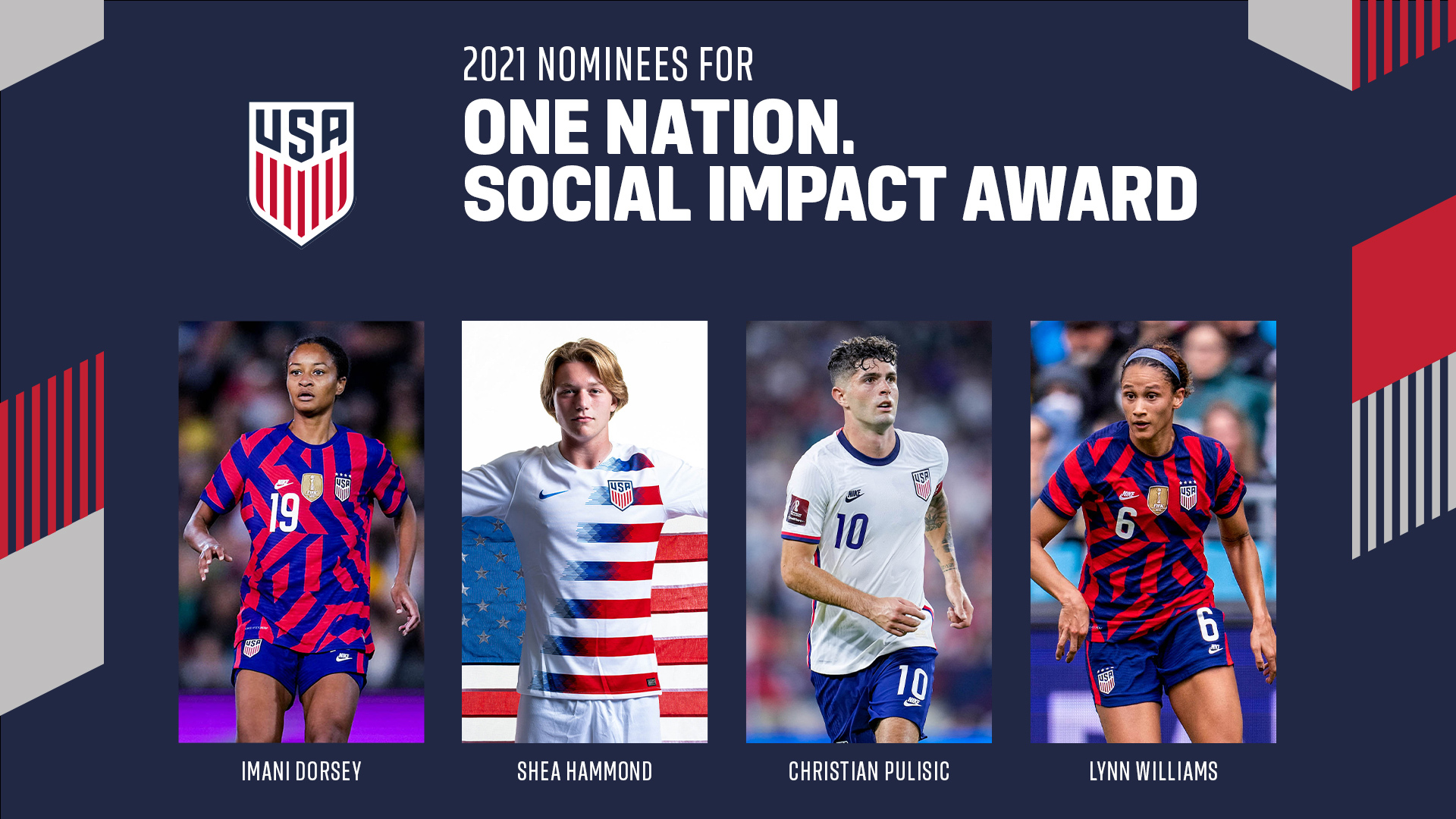 USWNT forward Lynn Williams and USWNT defender Imani Dorsey were each nominated for their involvement and leadership within the Black Women’s Player Collective while USMNT forward Christian Pulisic was nominated for his work with the youth in his hometown of Hersey, Penn. Para 7-a-side National Team forward Shea Hammond rounds out this year’s nominees for his efforts founding a soccer club for players with Cerebral Palsy at Clemson University, where he is currently enrolled.

ABOUT U.S. SOCCER PLAYER OF THE YEAR AWARDS

Votes for U.S. Soccer Player of the Year awards are collected from respective National Team coaches, National Team players who have earned a cap in 2021, members of the U.S. Soccer Board of Directors, U.S. Soccer Athletes’ Council, National Women’s Soccer League head coaches (for the USWNT awards) and American soccer league (MLS and USL) head coaches (for the USMNT awards), select media members and former players and administrators. In addition, select college coaches vote for the USWNT awards. For the first time, fans can vote for U.S. Soccer Player of the Year awards via ussoccer.com. Fan vote totals account for 15 percent of the award, with 85 percent coming from the other voting constituencies.