USWNT Back In Action Against New Zealand On Second Match Day 2022 SheBelieves Cup, Pres. By Visa

Coming off a hard-fought draw in its opening match at the 2022 SheBelieves Cup, presented by Visa, the U.S. Women’s National team will look to respond with a better performance on Sunday when it squares off against New Zealand at 12 p.m. PT at the Dignity Health Sports Park in Carson, Calif. The match against the Football Ferns will be broadcast on ABC and PrendeTV and has important implications in the tournament standings as all four teams are still very much alive in the race for the tournament title.

Iceland sits atop the tournament standings entering the second match day after beating New Zealand, 1-0, on a first minute goal in the tournament opener. The USA and Czech Republic are close behind on a point apiece, followed by New Zealand. 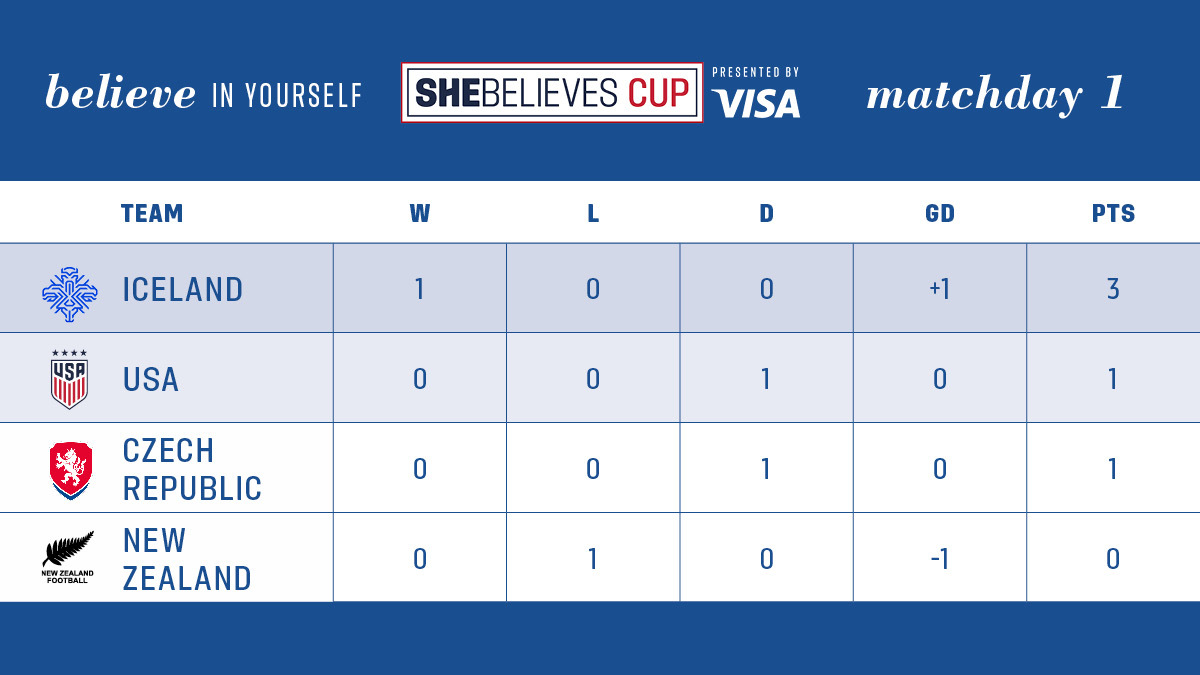 The U.S. roster for the 2022 SheBelieves Cup is made up almost entirely of players who attended the USWNT January training camp in Austin, Texas, with the addition of midfielder Catarina Macario, who missed the event due to an important match in France with her club Olympique Lyonnais, and veteran Becky Sauerbrunn, who missed the camp due to a minor injury. Sauerbrunn came on late in the second half against the Czech Republic to earn her historic 200th cap while 19-year-old Trinity Rodman came on in the 60th minute to make her USWNT debut. Rodman becomes the fourth teenager since 2010 to earn a cap for the USWNT, joining Tierna Davidson, Mallory Pugh and Lindsey Horan and is the 11th player to earn a first cap under USWNT head coach Vlatko Andonovski.

INSIDE THE SERIES: USA vs. NEW ZEALAND

The USA has played New Zealand 18 times overall and leads the all-time series, 16-1-1. The most recent matchup between the teams came in the group stage at the 2020 Tokyo Olympics, where the USA picked up a 6-1 victory as Rose Lavelle, Lindsey Horan, Christen Press and Alex Morgan all scored while the USA forced the Football Ferns into two own goals. Hassett scored the lone goal for New Zealand in the 72nd minute.

Prior to the matchup in Japan, the teams’ most recent meeting in the United States came on May 16, 2019, with the USA beating New Zealand 5-0 in front of 35,761 fans in St. Louis during the Send-Off Series for the 2019 FIFA Women’s World Cup. Carli Lloyd netted a brace for the USA with goals in the 61st and 83rd minutes, while Tobin Heath, Lavelle and Samantha Mewis also found the back of the net.

Team captain Becky Sauerbrunn played in her historic 200th match for the USA on Feb. 17 against the Czech Republic making her the 12th player in USWNT history to play 200 or more times. She is just the fourth defender to hit 200 caps, but just the second to almost exclusively have earned every cap on the back line, joining USWNT General Manager Kate Markgraf. Should she play vs. New Zealand, she’ll tie Markgraf for 11th on the USWNT all-time caps list with 201 caps.

A two-time World Cup champion and 2012 Olympic gold medalist, Sauerbrunn has started in 169 of her 20 caps and at 36 years of age, became the oldest player in USWNT history to reach 200 caps.

For the third year in a row, Visa, the presenting sponsor of the SheBelieves Cup, will award the MVP trophy to the most outstanding player of the tournament. The award will be announced following the conclusion of the final match and with the input of a selection committee comprised of representatives from all competing nations. For the second consecutive year, fans will also get the opportunity to vote for the Visa SheBelieves Cup MVP award using an online ballot to select among a list of finalists chosen by the committee. The fan vote will be incorporated into the overall determination of the 2021 Visa SheBelieves Cup MVP. Spain attacker and reigning FIFA Women’s World Player of the Year Alexia Putellas won the inaugural award in 2020 while USWNT midfielder Rose Lavelle took home the honors in 2021 after leading the USA to its second consecutive title.

The SheBelieves Cup, presented by Visa, is just one part of U.S. Soccer’s SheBelieves initiative to inspire and empower women and girls to achieve their goals in sport and beyond. The tournament, which will feature six total games, was first played in 2016. The USA won the inaugural edition, France took top honors in 2017, the USA won again in 2018, England finished first in 2019 and the USA returned to the top of the podium in both 2020 and 2021.

The tournament format for the 2022 SheBelieves Cup is the same as the first six years. The winner will be determined by total points (three for a win, one for a draw), with the first tiebreaker being overall goal difference, followed by goals scored, then head-to-head result. If teams are still tied, the next tiebreaker will be the Fair Play ranking based on yellow and red cards. Each team is allowed six substitutes per game over three sub opportunities and two concussions subs, if necessary. Halftime subs, concussion substitutions and/or additional substitutions due to an opponent’s concussion sub do not count against the three opportunities limit.

The USA carries a 63-game home unbeaten streak into the match which includes 56 wins and seven draws. During this home unbeaten streak, the USA has outscored its opponents 227-27, including a 97-3 margin during its last 25 matches at home, all of which have been wins save for the 0-0 draw with Korea Republic on Oct. 21. That match ended the USA’s home winning streak at 22 consecutive games, the second-longest such streak in USWNT history. The USA's longest home winning streak was 23 games and spanned from April 1993 to February 1996.

The USA has not allowed a goal on home soil in nearly two years, last conceding at home on March, 11, 2020 in a 3-1 win over Japan in the final match of the 2020 SheBelieves Cup. Since then, they’ve kept a program record 15 straight home clean sheets, the longest such streak in program history.

The Dignity Health Sports Park has been the site of exemplary play by the USWNT over the years. The USA’s two matches there in this tournament will be 17th and 18th games the team has played at the venue, which has hosted the USWNT more than any other stadium in the United States. With the match against the Czech Republic, the USWNT is now 16-0-1 all-time at the Dignity Health Sports Park since the first game played there in Sept. of 2003, a few months after the stadium opened.


ALL EYES ON WORLD CUP QUALIFYING

A new cycle is underway with less than five months until the start of qualify for the 2023 FIFA Women’s World Cup, which will be co-hosted in Australia and New Zealand beginning in July of 2023. The Concacaf qualifying tournament is scheduled to take place in Monterrey, Mexico from July 4-18, 2022, with the top four teams guaranteeing their spot in the 2023 FIFA Women’s World Cup. Two more Concacaf representatives will advance to a 10-team intercontinental playoff tournament to determine the final teams in the expand 32-team field for 2023.

Also new this cycle is the qualifying format for Concacaf itself. On August 19, 2021, the confederation announced the qualifying path to the 2023 FIFA Women’s World Cup, which is now also the path to the 2024 Olympic Games in Paris and, for a few teams, the newly instituted 2024 W Gold Cup. The newly dubbed 2021 Concacaf W Championship began for all teams -- except the USA and Canada -- during this February FIFA window and serves as the preliminary round the World Cup and Olympic qualifiers. The eight team Concacaf W Championship will consist of group play, followed by semifinal and championship rounds. Along with qualifying for the World Cup, at conclusion of the Concacaf W Championship, the winning nation will also guarantee its place in the 2024 Paris Summer Olympic Games Women’s Football Tournament and the 2024 Concacaf W Gold Cup. The runner-up and the third-place nations will progress to a Concacaf Olympic play-in to be played in September of 2023. The winner of the play-in will also guarantee their place in the 2024 Paris Summer Olympic Games and the 2024 W Gold Cup.