Oyster Bay FC, born of adversity and just under one year-old, are punching above their weight after knocking out a pair of Open Cup champions en route to a tournament debut.
Michael LewisMarch 19 2022
Open Cup

At this time last year, one of the most surprising teams in the 2022 Lamar Hunt U.S. Open Cup field didn't even exist -- at least not in name or as a twinkle in anyone's eye.

Oyster Bay United FC's ascension as Cup giant killers is a testament to their coaches’ preparation, the players' grit and determination to overcome obstacles and an owner who was willing to take a chance on a team that was struggling off the pitch.

It was a storm that saw Oyster Bay best two past Open Cup champions, the N.Y. Pancyprian Freedoms and Greek Americans, during the Local Qualifying Rounds last fall.

"They may be not the same team [as] when they were champions, but it's part of their history," Oyster Bay’s coach Josue Esqueche said. "We're trying to make...history in the Open Cup."

Rough Roots Under Another Name

Competing as Queens Meadow in the UPSL's American-Premier Division last spring, the team fared well on the field. But they endured financial difficulties off it.

"Basically, we were going to fold," Giorgi said. "We had to kind of grasp at straws to try to keep the team together."

Giorgi had some ideas. Queens Meadow managed to finish the season, though its remaining home games were moved from Queens, N.Y. to Gold Coast FC in Oyster Bay, N.Y. on Long Island, a youth soccer club where Giorgi was director of coaching. 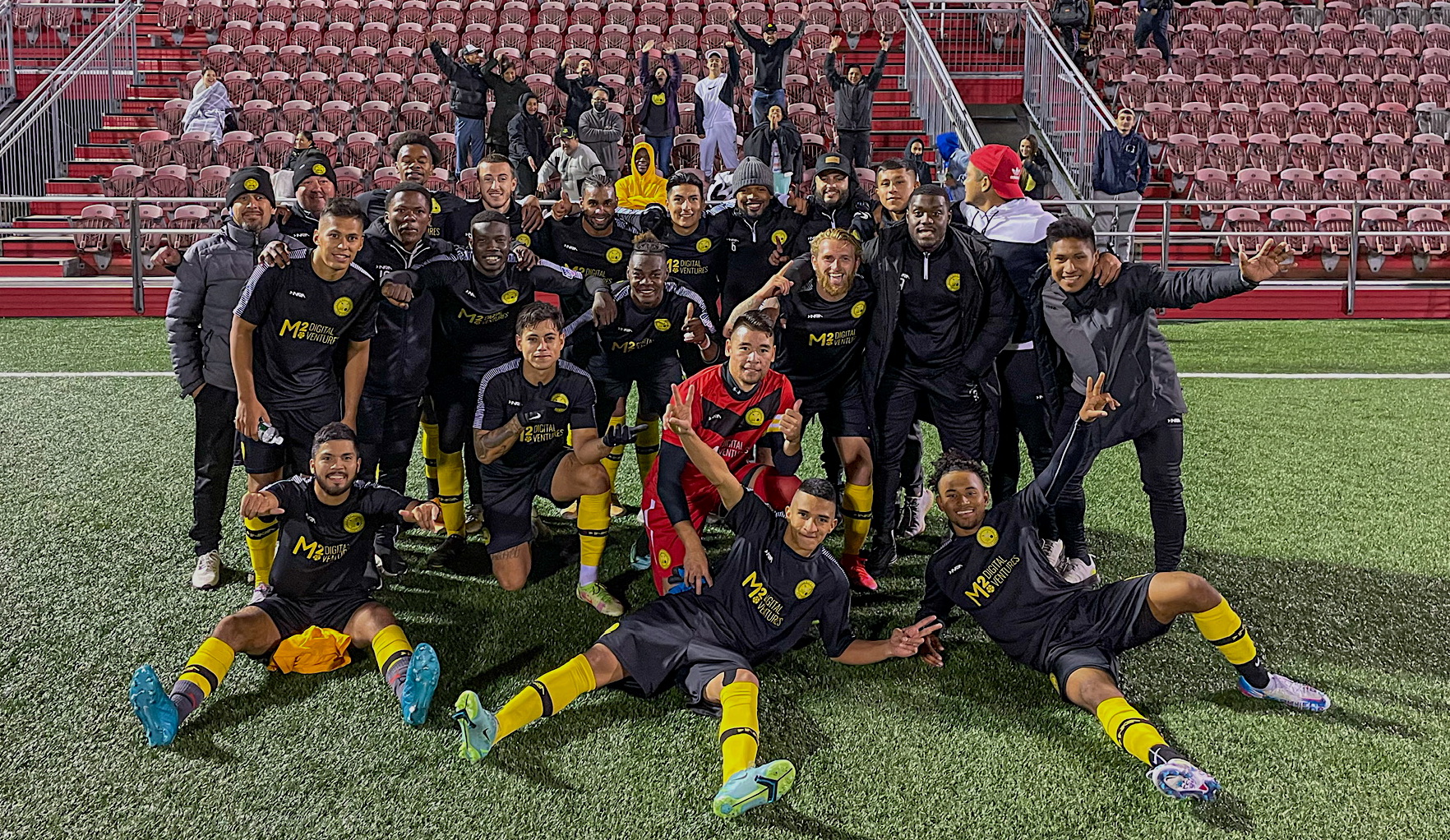 The next challenge was keeping the team alive.

"We reached out to the community and said, 'Hey, maybe we could be a community-backed club,'" he continued. "Maybe we could find someone who's interested in being an owner or something like that."

About three-quarters of the way through the 2021 spring season, Mark Colacioppo, the father of one of Giorgi's youth players, answered the call. He spoke to Esqueche and manager and assistant coach JP Espejo.

He decided to get involved and move the team officially to Oyster Bay.

Colacioppo, the founder of M2 Digital Ventures, which is involved with online marketing, investment, tech start-ups and advertising, was enticed by the club's big ambitions.

"It was definitely something on the front of my mind that we could make a run and make the U.S. Open Cup proper,” he said. "I knew it was going be a tough road. I didn't know if it would actually be realistic, but we made it through.

“One of our top goals has been accomplished," added the owner.

The core of the squad came over from Queens Meadow.

Oyster Bay went on a roll during the fall UPSL season, losing only once in 19 matches, in the UPSL playoffs. Moreover, the club made national headlines, upsetting two former Open Cup champions in New York Greek American FC and the New York Pancyprian Freedoms.

"Each qualifying round became more of a boost," Colacioppo said. "They're not the teams that won the Cup, but experience goes a long way, especially in tournaments. They play in it every year. They got the little tricks and tips."

With odds and history against them, OBUFC's amazing run began on September 19th, when they got past four-time champion Greek Americans in Rockville Centre, N.Y. Due to several roster eligibility issues, the visitors could suit up only 11 players and two goalkeepers.

Oyster Bay Able to Adjust on the Fly

Only hours prior to kickoff, several Oyster Bay players discovered they weren't eligible to play. The team scrambled to put together a Starting XI.

Adding to the challenge was the fact that Oyster Bay began the game with ten players because one team member showed up late to the game. Back-up goalkeeper Kevin Shannon was forced to start in the striker position.

Despite losing a player to a second-half red card, Oyster Bay managed to hold the Greek Americans scoreless through 90 minutes and extra-time. Goalkeeper Jean Carlos Perez made three saves during the shootout as the visitors prevailed (3-2).

"It was a bit nervy, but I've got to be honest, nothing ever broke," Giorgi said. "We were never like, 'I guess it's over.' We never threw in the towel. We said ‘okay, this is what we got. We're going to do it.'" 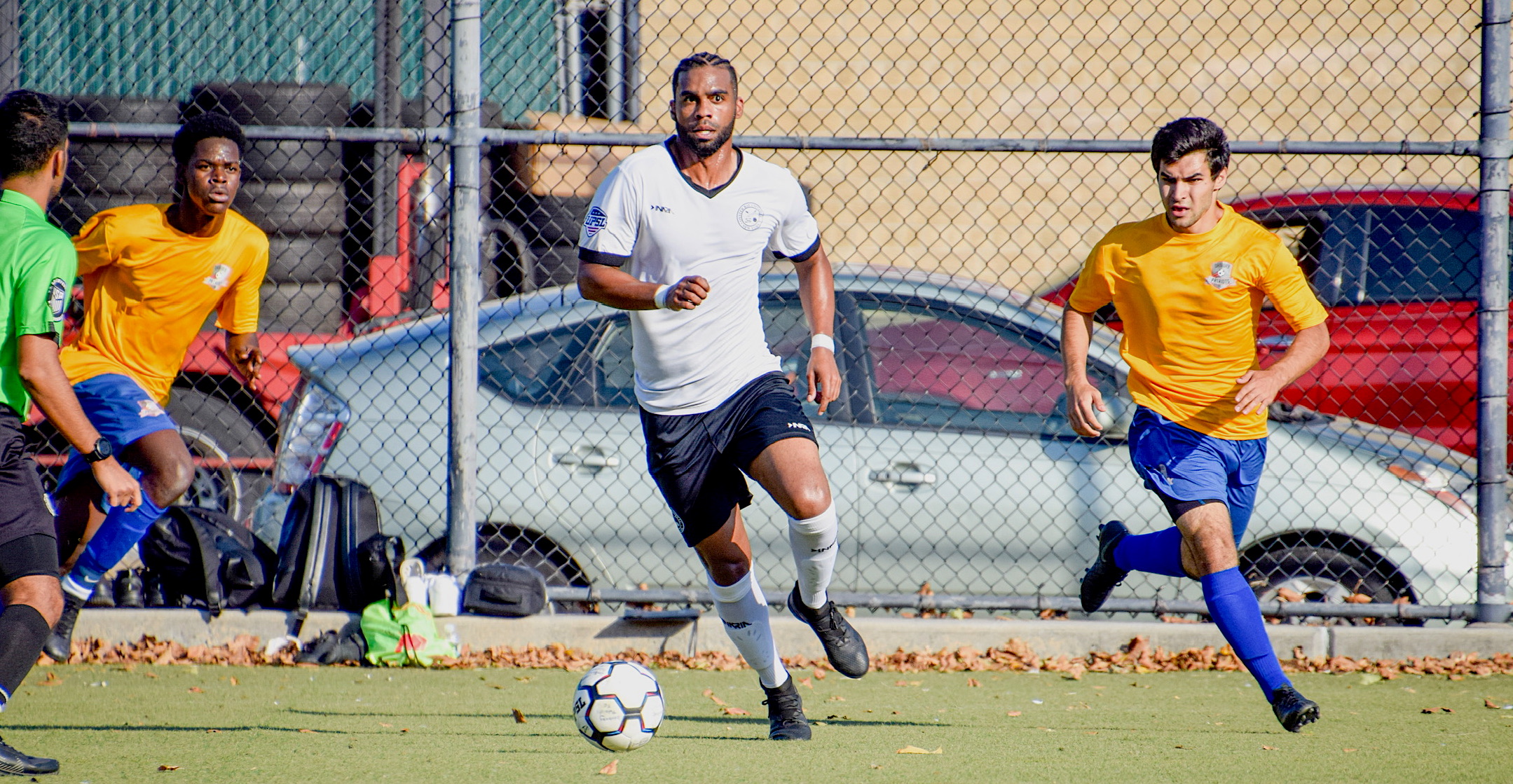 Next up were the Pancyprian Freedoms, the three-time Open Cup winners, at Belson Stadium at St. John's University on October 17th. Bolstered by a full complement of players, Oyster Bay recorded a 2-0 win -- although they needed some 11th-hour heroics in extra-time to get it done.

Davidson Marseille and Jeison Solano scored at the end of each period to seal the deal. "It was another crazy, hard-fought exciting game, but we were able to pull it out," Colacioppo said.

Added Esqueche: “That's when we all knew what we were doing was the right way."

And on a chilly November night at Brewster High School in Brewster, N.Y. in which the temperature dropped to 35 degrees, Oyster Bay's dream became reality with a 4-1 victory over Westchester United FC.

Luis Altuve and Sebastian Ruiz gave the visitors a two-goal advantage before Westchester sliced the lead in half in first-half stoppage time. The men from Oyster Bay put the game away on a Marseille strike early in the second half before Mathews Carriel converted a penalty kick with only minutes remaining.

"We fought hard. We scored a bunch of goals away,” Giorgi said. “As soon as the whistle blew, the champagne broke out.”

So, just who are these upstarts from Long Island?

Oyster Bay United is made up of players from various nationalities and backgrounds -- Venezuelan, Colombian, Argentine, Spanish, Italian, Haitian, Jamaican and local-born U.S. players. The ages range from 18 to 26. 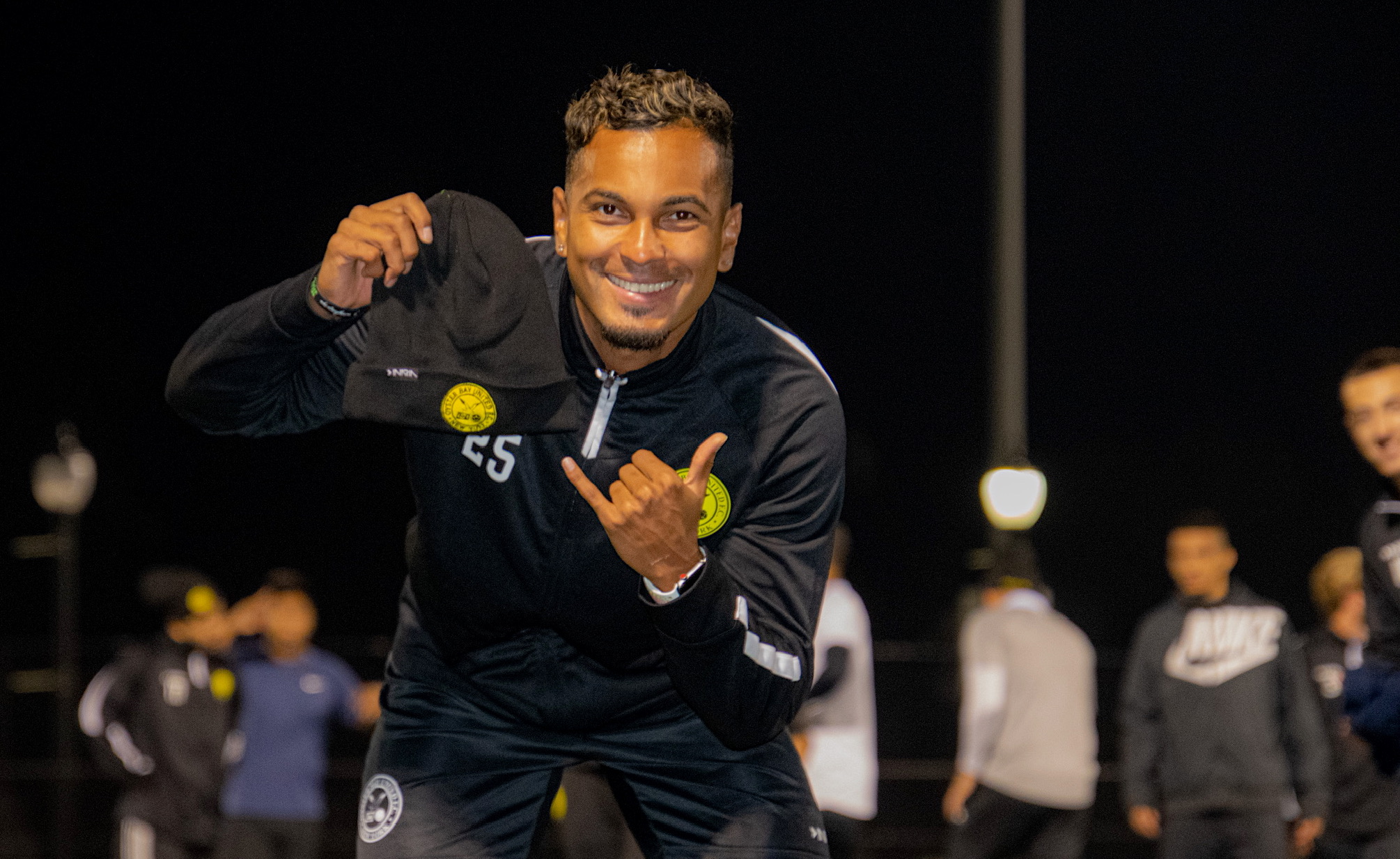 But getting all those styles together on the same page can be a challenge and a half. "It's definitely hard initially, but if you overcome it, it's something beautiful," Giorgi went on.

And so far, so very good for the young club.

Esqueche, 26, a former professional player for Metropolitanos FC in his native Venezuela, pulls the strings. Starting his pro career at 16, Esqueche decided to pursue coaching when he emigrated to the U.S..

And don’t let his tender age fool you. Esqueche knows the game.

"I'm not surprised," he said about Oyster Bay's success, "because I know that our goals as a new team were big goals. We worked for it. Since day one, we kept developing our identity as a team.”

He’s been a stickler on preparation and training. Esqueche holds three practices on weeknights prior to weekend matches – a grind for a team comprised of players with day-jobs

"Good results are the consequence of good preparation during the week," he said. "We keep building good performances during the preseason. That's what gives the team the confidence to face those challenges."

Colacioppo, unsurprisingly, has been impressed with Esqueche.

"The players respect someone who played at a high level and has serious game experience," he said. "He is serious on the pitch. He's a younger guy for a coach, but definitely has a lot of soccer knowledge. They've really banded together well under him."

If Oyster Bay gets past Hartford City, they will play Hartford Athletic of the USL Championship – the U.S.’ second professional tier just below Major League Soccer (MLS).

"Every step that we're making is big," Esqueche said. "Every step is a new opportunity because we have more doors to open. It gives these players their first experience of showing themselves against some professional clubs.

"That's one of the biggest goals, having a club that can compete and that can provide players to the professional level,” added Esqueche. “This is a huge opportunity.”

Just How Far for Oyster Bay?

"If we can keep going, that will be an amazing opportunity," said Esqueche.

Colacioppo and Giorgi are just as hopeful.

"Now that we're in the tournament proper, we'd like to make some more noise," Colacioppo said.

“We want to make a statement,” Giorgi said. “We don't only want to win. Obviously, we got to take it one game at a time, but our eyes are on that second, third round. We want to be up there with the big boys. We're focused, we're determined.” 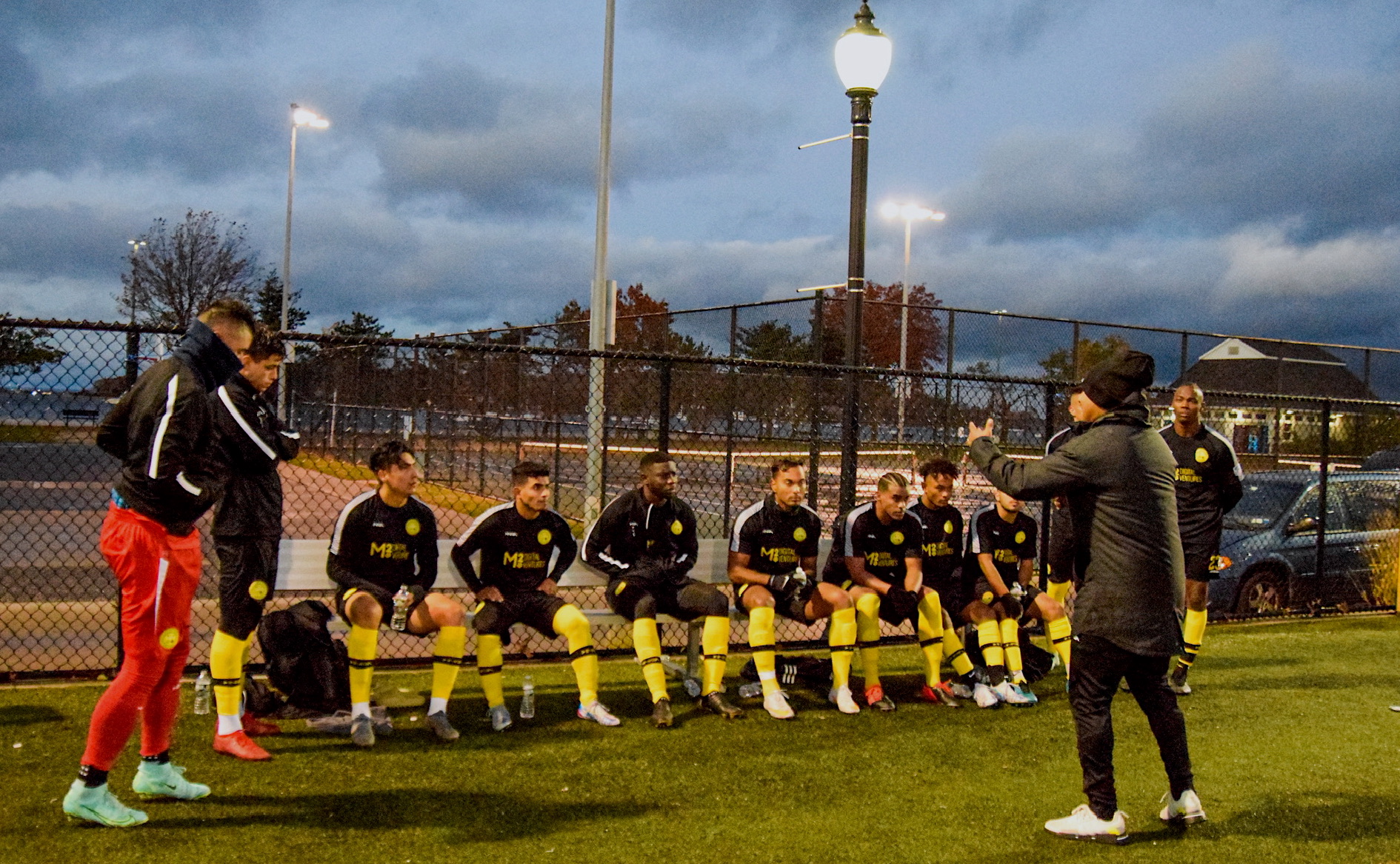 That's just one of the club's goals.

"Right now, the focus is on building the fan base, getting more people to matches, getting the community involved, and spreading the joy and love of soccer around the community," he said.

Toward that end, Oyster Bay United FC are off to one impressive start.