Lansdowne Yonkers FC head coach and former captain Sean Kelly, a construction worker by day, tells the tale of how he rediscovered his love for the game (and life itself) on the eve of his third Lamar Hunt U.S. Open Cup.
Jonah FontelaMarch 19 2022
Open Cup

Sean Kelly stood 26 stories up over Bleeker Street and stared out at the New York City skyline. He wondered how he got there. “I never knew a thing about construction,” he said in the vacant apartment, a smell of fresh paint and new beginnings in the air. “But here I am. New York. Doing honest work and back in football.

“I got a second chance,” he added.

The Bhoys (of Yonkers) are Back in Town.@Lansdownebhoys, led by captain & former @Arsenal youth Sean Kelly, return to @opencup for a run at glory. #USOC2018 ⚽️☘️🏆

Kelly planned for big things early. Not the skyscrapers, the glass and steel of Manhattan, but the bright lights of London for sure. He was rising up the ranks at the Arsenal academy. Just a young thing, barely a teen, he stepped out on that old Highbury pitch, the grass green as Oz’s Emerald City.

“I think back now and ask myself ‘did it really happen?’ – ‘was that even me?’” Kelly remembered of his years at Arsenal, where he played with teammate Cesc Fabregas and captained a side in the FA Youth Cup alongside Johan Djourou and Fabrice Muamba. 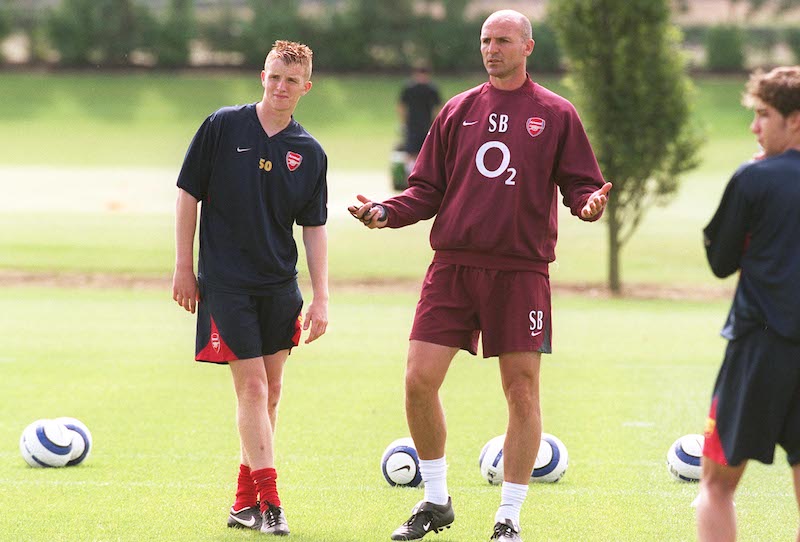 He rubbed shoulders with Arsene Wenger’s first team and trained with some of the biggest stars of the day – the likes of Thierry Henry, Robert Pires and Dennis Bergkamp.

Kelly – tall, athletic and quick – was being groomed for the big stages. “But you couldn’t think of it that way then. Sure, you’d sneak a peak at Henry in the halls, but there wasn’t time to be star-struck because you had to show them you’re there for a reason.”

The reasons Kelly landed at Arsenal were simple: He was outstanding. A young midfielder with maturity and guile and a brain. He had the makings of a captain. Everything you wanted in a player.

But he had injuries too. The pain in his voice is plain when he talks about it – about the slip, the slide and the fall. You don’t shout about the time your dream died. You whisper.

“I started to pick up a few injuries,” he said, his breath going a little faster, punctuated by small sighs. These aren’t easy things to say. “Then you think you’re getting back fit and you pick up another niggle, and then another.”

As quickly as it came, it was gone. Kelly was on a train home to County Kerry in the green, grassy west of Ireland. Text messages came in from his family. They said how proud they all were of him – out there chasing the big dream. But there he was -- on his way home, the phone’s light winking in his eyes, his bags on the seat beside him.

“I went a bit wild after that,” he admitted. The smile that comes quick to Kelly’s face faded when talk turned to his seasons back home in the League of Ireland, where he played with Cork City. “I never used to drink really. But I’d find myself out with my friends, and caught up in the wrong mentality. We’d play on a Saturday and go out after. Then you spend a few days getting over it.

“You’re eating crap.,” he added. “It wasn’t how a professional was supposed to be. I lost my focus. I put on weight.” 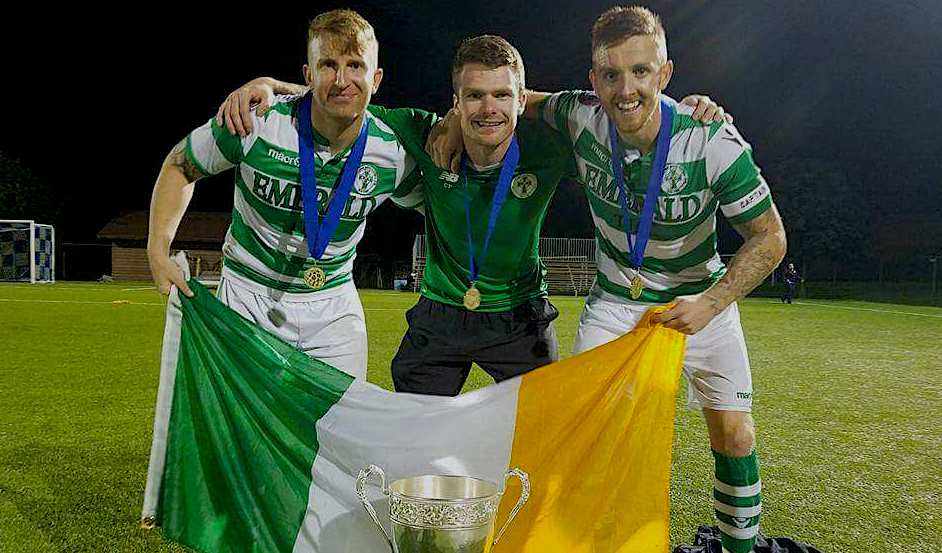 Soon Cork City showed Kelly the door. He signed for Pike Rovers in Limerick, his relevance fading. He was barely in his twenties and he was yesterday’s news. He snapped his leg in three places. He fought his way back, got injured again.

Then the darkness took over. He’s strong enough to talk about it straight. The fear. Depression. Sadness. Loss. Regret. All the big things we hide from the world, Kelly put them right out on the table. “I just said it one day: I’m not playing anymore. I’m fed up with it. Mentally, it’s too much.”

Down in the “Dark Trenches”


He’d given up. His dream was dead and getting colder every day. His body was battered, his left leg pinned and screwed back together, and he’d lost his spark. He was way down deep in a hole, back in Kerry with nothing but reminders everywhere he looked of how it all went sideways.

That’s when the phone rang: A call from America. Someone in Yonkers, from the Lansdowne Bhoys (Now Lansdowne Yonkers FC). There was work. There was football. There was a second chance.

“I’ll never forget it when the call came in,” Kelly remembered, staring out at the island of Manhattan spread at his feet, on lunch break from one long day among many. “This was a second chance at life and I thought ‘I’m not gonna’ let it go.’ I always dreamed of coming to America. I’ll never forget what this club did for me.”

Tibbets Brook Park in Yonkers brushes against the Bronx and the affluent suburbs to the north in Westchester County. It’s a long way from Highbury (the Emirates now) and Arsenal, but Kelly became a captain again on the bumpy pitch there.

With a second chance at playing the game he loved, he worked harder than before – becoming one of the top defenders in the amateur game. He went a thousand-miles-an-hour every day, as if making up for lost time, or simply grateful for another chance.

Up at 5:00 a.m., off to the gym. He hustled from Yonkers to Manhattan for work that most days went past 5:00 p.m.. Then back to the gym again – or training, maybe a mid-week game out in Brooklyn or in Morristown, New Jersey.  It was past midnight most nights before he knew it and that alarm clock was threatening again.

Ask Kelly, 34 and now putting in the same kind of energy as manager, why he does it.

“Because I love it,” he’ll answer. It’s that simple.

He’s been with Lansdowne for nine years, winning four first-division titles in the famed Cosmopolitan League and helping build one of the country’s strongest amateur sides. And he’s gone from a grunt, a bucket man on the construction site, to project manager. Watch him work up in those high-rises, in that beehive of NYC where every demand is bigger and all the stakes are higher, and you see how he’s good at it.


Kelly’s been a national amateur champion twice and this 2022 Open Cup campaign will be his third go-round in America’s oldest soccer tournament. The first time, in 2016, he and the team beat the all-pro Pittsburgh Riverhounds en route to the Third Round.

A Last Hunt for the Cup


They drove seven hours (both ways in one day – people have to work after all) to beat those Pittsburgh-based professionals from the United Soccer League (USL Championship) back in 2016.

They ended up losing to 1999 Open Cup champions the Rochester Rhinos in their next game, but it was a proud debut for the Bhoys from Yonkers.

“We had a really good run,” Kelly remembered, before showing his true colors. “But I think we could have done better.” 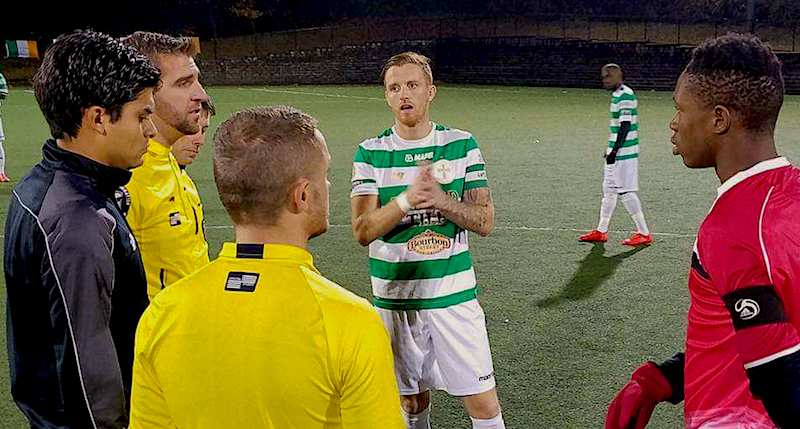 In 2018, they lost a 3-0 Second-Rounder against USL’s Charlotte Independence.

And now, in 2022, after the tournament’s two-year hiatus due to COVID-19, is another chance for Kelly and his team to see how far they can push it.

He’s seen it all go wrong and he knows the value of second chances. “We’ve proved it at our level and we want to go a show people we can take that step up,” he said. “There’s beauty to this Cup – you catch a team cold and they might not know how to react. We have a group who are determined to be the best and it’s hard to stop a force like that.”

There’s no stopping Sean Kelly. He’ll talk all day, about the hard times and the good ones too. The rise and the fall and the rise. “How can you get tired of this, man?” he asked gesturing out to the New York skyline – at a city of dreams and opportunities.

“I’m where I was always meant to be – playing football and doing honest work. Honest everything,” said Kelly, his smile telling the whole story, the big city reflecting back in his wide eyes. “Can’t go wrong if you’re honest.”