“I'm going to drive 14 hours to Massachusetts. I'm going to play the game and then I'm going to come back here,” remembered Western Mass Pioneers goalkeeper Jermaine Fordah. “I was like, ‘alright, this could be good’. So I got on the road [and] I drove.”

Traveling is nothing new for this 28-year-old. Driving is a huge part of his everyday life playing with the Pioneers, an all-amateur USL League Two team in the Second Round of the 2022 Lamar Hunt U.S. Open Cup.

He’s adopted a routine on his commute from Indianapolis, Indiana –– where he’s training with Indy Eleven of the USL Championship (the pro tier just below Major League Soccer) –– to Ludlow, Massachusetts, where the Pioneers play.

“The first six hours, I listen to the sound of the road,” Fordah said. “And then as it's starting to take its toll, that's when I start putting on music.”

This level of commitment is nothing new for Fordah. He’s bounced around the American Soccer Pyramid since 2014, when he first moved to the States from Luton, England. He was 21 then and hungry to make his mark.

“I came across the number of a guy who was the under-23 coach at the New York Red Bulls,” Fordah said. “So I just ended up cold-calling him and…before I knew it I was training with the reserves and the first team. I ended up training with, like, Thierry Henry and Tim Cahill.”

For Fordah, those months spent with the Red Bulls were surreal.

“It's like every touch, you know, is a goal and you’re just trying to rob him of something” Fordah remembered about Henry, the World Cup winner and former Arsenal and Barcelona star considered by many to be the greatest striker of all time. “When he’s running at you with the ball, you’re just kind of hoping to make a save, but everything's just like clockwork.

“You think to yourself, ‘I just made a save off Thierry Henry, there are Premier League goalkeepers that haven’t done that’,” Fordah mused.

But as quickly as things took off, they began to unravel. 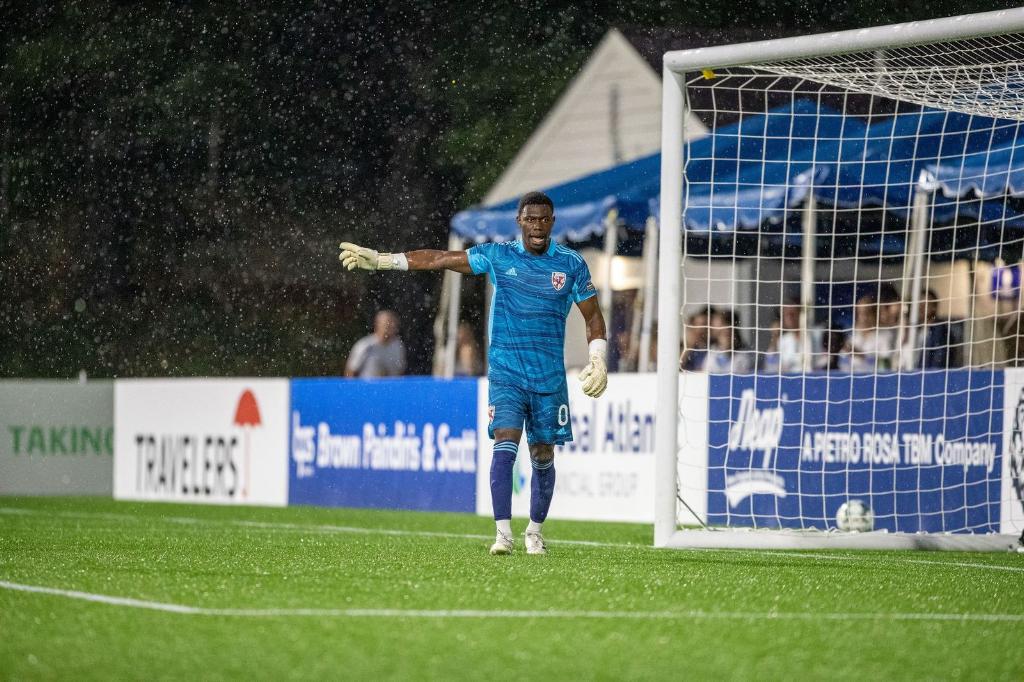 “Next thing I knew…I was told ‘we don't need you, don’t come back to training’,” said the keeper -- who’s on the shorter side of the goalkeeping spectrum, at just under six-feet, but possesses lightning reflexes.

Just four and a half months after joining the Red Bulls, he was back where he started. Scrambling to find a team and desperate to make something happen.

“I was doing things like coaching and Uber [driving],” he said. “Just to try and get the money in so I could continue chasing the dream.”

After weighing his options, he decided to move back to England and try his luck internationally.

“If I was to show you my sent box, my outbox of emails, you wouldn't believe that it was real,” Fordah said about the creative lengths he’d go to. “I'm telling you, I've sent emails to foreign teams in their language trying to get a trial. I sound crazy.”

That self-described insanity led him to Johannesburg, South Africa, where, after a few email exchanges, he was told that he had an opportunity to sign with Polokwane City, a team in the South African Premier League (the top tier of the country’s professional system).

“It turns out they didn't even know I was coming,” he recalled. “But I managed to sweet talk my way into a training session.”

Unfortunately, regardless of how he played, the team couldn't sign him because of his international status. Still determined, Fordah took a 12-hour bus trip from Johannesburg to Richards Bay for another trial. It ended with the same result. 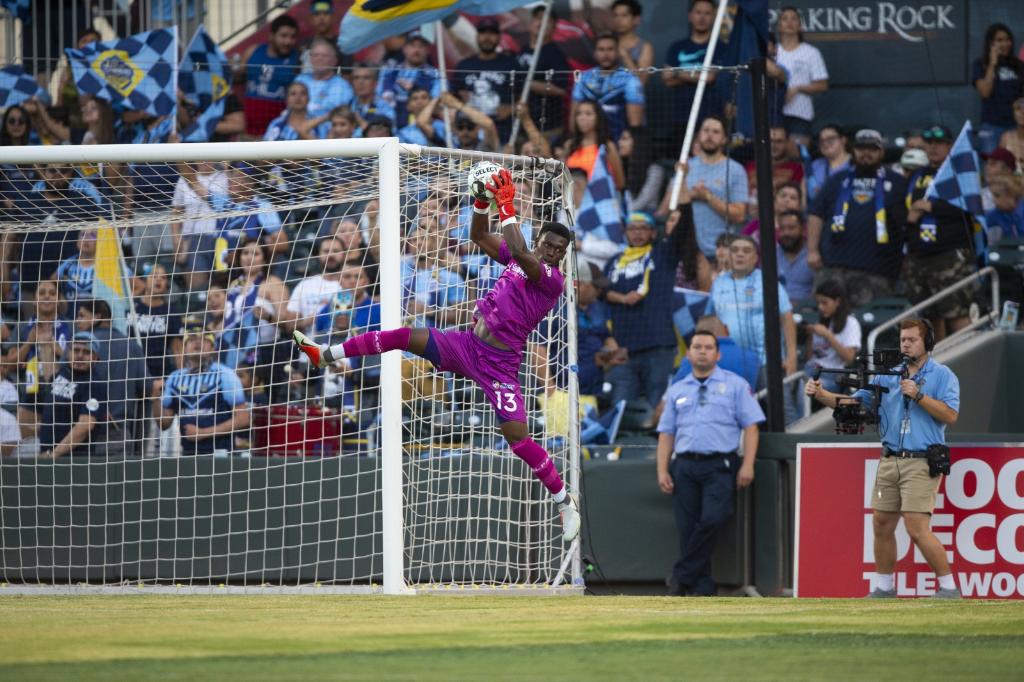 After a month in South Africa, staying with friends and reaching out to teams, nothing came back. “In hindsight, I should've just taken the flight back to the U.S. or back to England,” Fordah  said. “But I was so desperate to make it.”

Shortly after returning to England, he went on LinkedIn and found a contact for Marius Røvde, the goalkeeper coach for the Vancouver Whitecaps. Next thing you know, he’s flying to Canada, where he spent the next five months training with (current Bayern Munich and Canada star) Alphonso Davies on the Whitecaps second team and living with his wife's grandmother.

But, once again, his international status left him without a contract. “So I flew back to England,” he said. “And that's when the West Ham thing came about.”

Fordah remembered sitting on his couch in 2017, feeling depressed. He was trying to plot his next move.

“...I get a message from a goalkeeper coach who's like, ‘Hey, West Ham need someone to shoot at…Are you up for it?’” Fordah said.

“You see the training ground, the grass is pristine, it’s like a summer day and the sun is shining and the sprinklers are going and the grass,” Fordah remembered, pausing for emphasis. “Every blade is the same size! 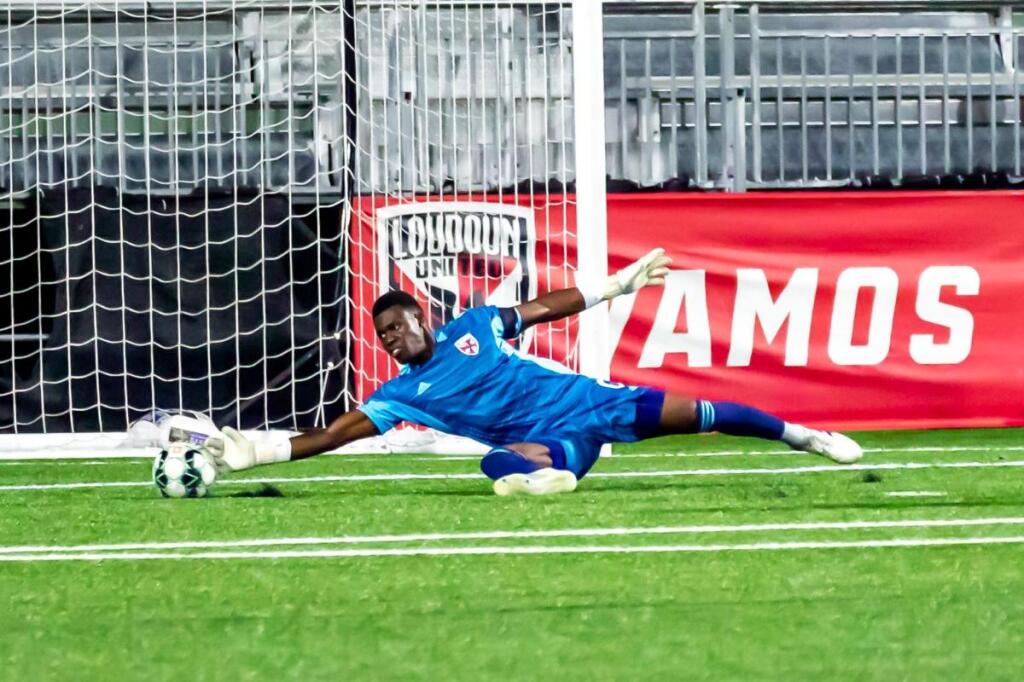 “Joe Hart [former England goalkeeper] was there,” Fordah said. But more so than the players, he was starstruck most by the environment.

“You look down at your shirt and you see the West Ham crest and you're like, ‘This is wild!’ I'm making save after save, and I honestly thought I'd just be there for a couple of days,” Fordah added. “But the manager of the under 23s said: ‘Can you come back tonight? Can you be with us long term?’”

Fordah ended up staying with West Ham for a year and a half. And although he didn't play in any competitive games, the time he spent training with the team proved invaluable. The experience validated so much of the rejection and uncertainty he’d faced.

Flash forward a year and Fordah was back living in Connecticut with his wife and her immediate family. He was still buzzing from his time at West Ham and ready to give a pro career in the States one final go. But after so much time apart, he was committed to staying close to his wife. He had a quick stint with Hartford Athletic and the New York Cosmos B.

“I'm 24 at this point. And, you know, I see that there is a new [USL] team in El Paso [Texas – over 2000 miles from his temporary home in Connecticut],” Fordah said. “So I get in contact with the manager and just tried to sell myself.”

After days of training in El Paso, near the border with Mexico, his opportunity finally came. Walking into the locker room he felt a special kind of energy as he sat at his locker. His teammates crowded around him silently.

“‘What’s going on here’?” he thought to himself before turning toward his locker.

“When I saw my name, that moment I knew: ‘this is happening’,” Fordah remembered.

His first professional game under contract was against Real Monarchs in 2019, after El Paso’s starting goalkeeper got injured. And his first bit of action came early on.

“The ball was crossed in and I caught it,” Fordah said. “It’s funny because I wasn’t nervous, you know, it was like I was always waiting.”

The game finished 0-0. “To keep a clean sheet in a professional league debut…That was honestly a special moment for me,” he said.

Fordah played three games over two seasons for El Paso before being released.

‘SOUNDS OF THE ROAD’

His next opportunity came from Loudoun United, in Leesburg, Virginia (another USL Championship club). His trial went well and his second professional contract came soon after. The 2020-2021 season was rough due to the pandemic. But Fordah proved himself enough to start for Loudoun.

He finished the USL Championship season third in saves (103) and was awarded Save of the Week numerous times.

After the season, he hoped to renew his contract. However, that day never came. The team was building a younger squad, and Fordah, at 28 years-old, didn’t fit the new model.

“The days went by, the weeks, the months,” said Fordah who was eventually let go midseason. “[After that] All I'm getting back is just ‘No, no, no, no.’ And it started to take a massive mental toll on me.”

Earlier this year, Fordah was contacted by long-time Western Mass’ head coach Federico Molinari. “They said they’re looking for a goalkeeper to play in the Open Cup for them…and so I said, ‘I’m actually in Indiana at the moment [training with Indy Eleven] but…if you want me to, I can do that.’” 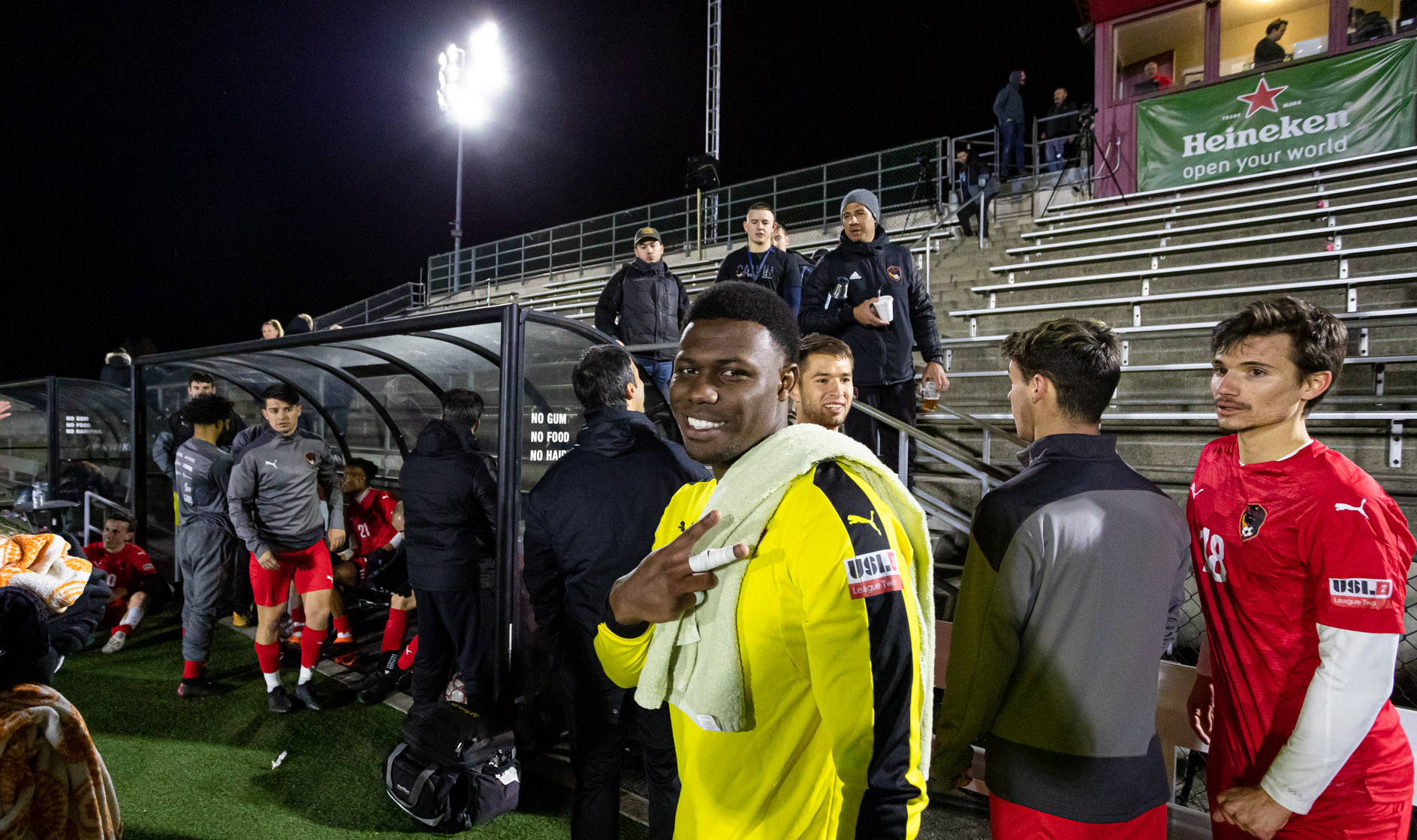 His first match with the team was on March 23, when the Pioneers beat Bay State Soccer League amateurs Brockton FC United 2-0 in the First Round of the Open Cup.

Fordah went into this game without training with (or knowing) any of his teammates. He hadn't played a game in six months. “Literally, I arrive in the changing rooms … ‘Mate, what’s your name? What’s your name? What position do you play? I’m Jay. Let’s do this’.”

Despite all the driving, little training, and meeting everyone for the first time, Fordah – no stranger to strange circumstances – had a great game. He made several saves and kept another debut clean sheet.

As a man of faith, when things get hard for Fordah, or when he hits a wall, he knows how to pick himself back up. “I just try to build myself back up and go again,” he said. “Maybe I’m crazy –– Probably am. But I keep believing that the longer I keep hammering at the door, eventually it's going to open.” 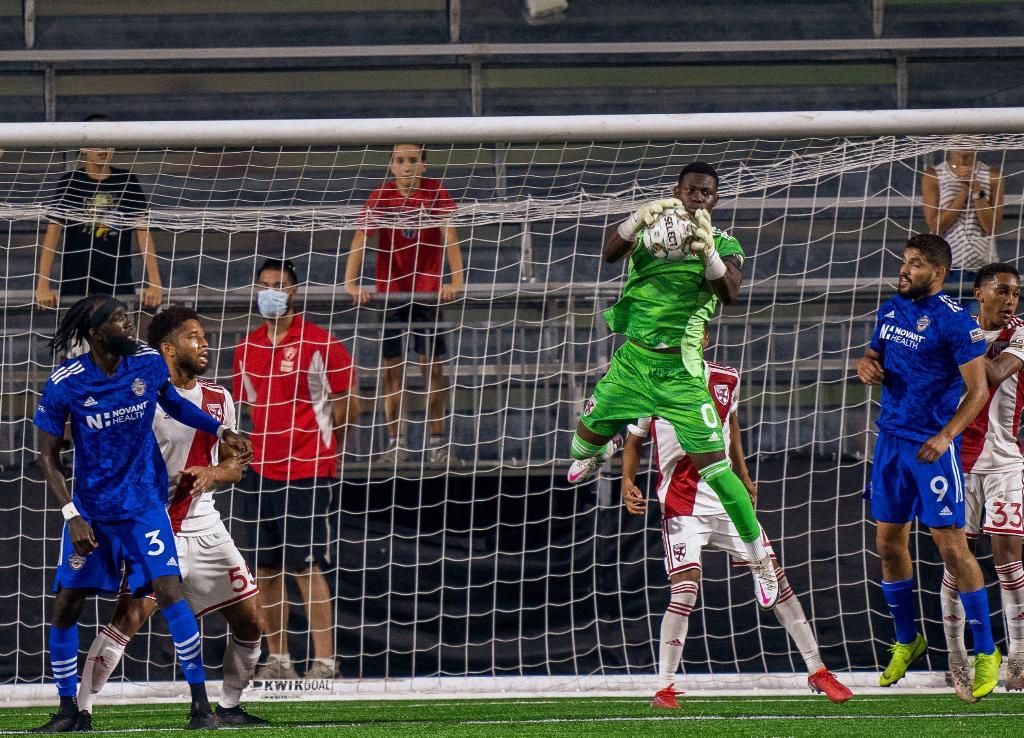