Matt Lewis & his Detroit City Right at Home as the Underdog

Matt Lewis’ two goals helped push Detroit City through to the Open Cup Third Round – where he hopes to replicate the giant-killing run of his college days at Fordham against MLS’ Columbus Crew.
Michael LewisApril 18 2022
Open Cup

Matt Lewis knows something about being a Cup underdog.

Five years ago, little was expected of him (and his Fordham University teammates) during the NCAA College Cup. But the Rams won three straight matches, two on the road, to reach the Elite Eight for the first time.

That magical run – though well short of the championship – left them feeling like winners.

We're back again Tuesday night when we face @ColumbusCrew in the @opencup!

Tickets are moving fast and some sections have already sold out - Don't wait to get your spot! ⚜️https://t.co/zYoJWCmyR0#DCTID pic.twitter.com/ZUzdLa1FMr

The Detroit City FC center-back hopes to put that experience to good use when his USL Championship side face another daunting task in the Lamar Hunt U.S. Open Cup against the Columbus Crew in a Third-Round contest on Tuesday, April 19 at home at Keyworth Stadium.

"We're really excited to prove ourselves and show them what we've got," Lewis said of Detroit City’s first-ever competitive contest against a side from Major League Soccer – the top-tier of the country’s professional soccer scene.

Getting the Head Right

Lewis knows, when taking on a heavy favorite, success could come down to the right mindset.

"We [at Fordham] went into the games expecting to be the underdogs," said Lewis, Detroit’s unlikely attacking hero with two goals in the Second Round. "We embraced that mentality. We had nothing to lose. We were just having fun." 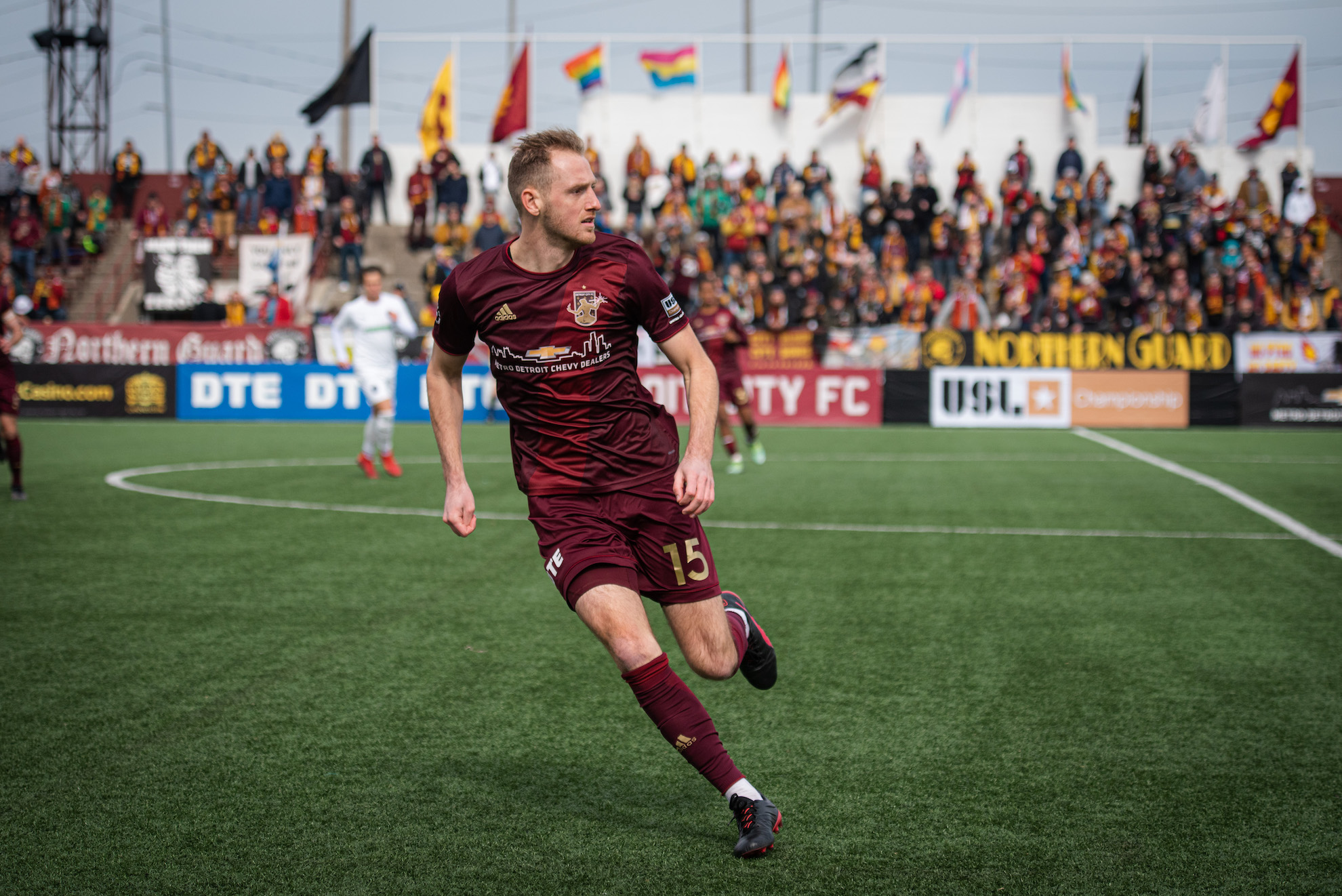 And causing much havoc in the NCAA Division I tournament with two head-turning away upsets. Fordham played three road games within a 14-day span in Atlantic Coast Conference country.

It started with a 3-2 comeback extra-time home win over St. Francis College as Lewis headed in a free-kick for the 81st-minute equalizer The Rams dispatched 11th-seeded University of Virginia in Charlottesville three days later (1-0) and pulled out an 8-7 shootout triumph after playing to a 2-2 tie at sixth-seeded Duke University in Durham in the Sweet 16.

"We tried to put all the distractions aside," Lewis remembered. "Once we were able to allow ourselves to do that, we just embraced the moment."

Fordham came back down to earth in a 2-1 loss at third-seeded University of North Carolina as the hosts tallied an 80th-minute game-winner in Cary.

Positive Lessons Despite a Loss

A loss is always difficult to take, but the experience left Lewis with positive vibes. "That's some of the happiest times of my soccer career," he said. "Doing that with my best friends and being able to take down some Goliaths of college soccer, was pretty fun. You can't match that kind of thing."

Lewis now hopes to catch lightning in a bottle again. But it remains to be seen whether Detroit City can duplicate Fordham's success. 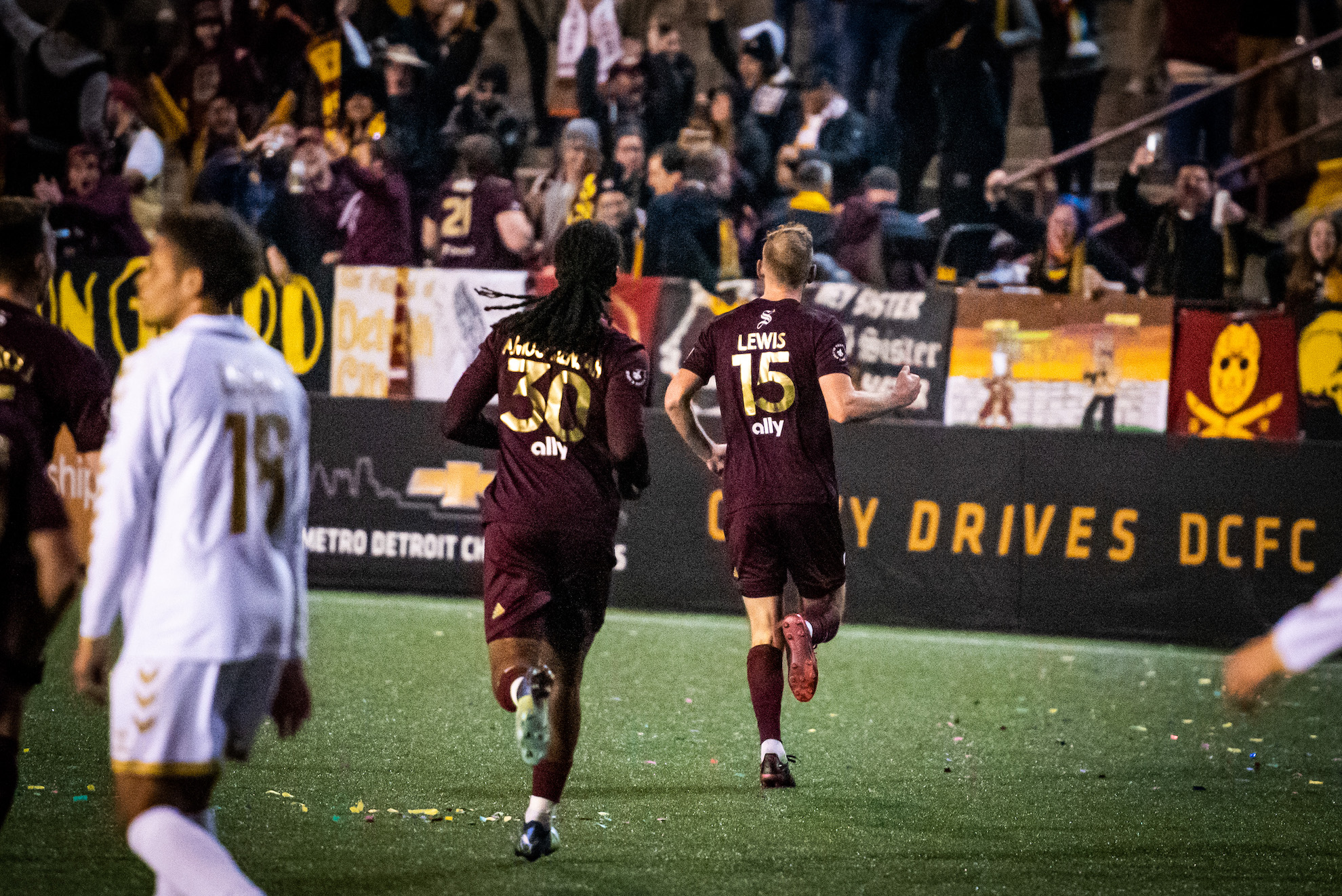 Le Rouge took a first step by posting a 3-0 Open Cup Second-Round home win over nearby rival Michigan Stars FC on April 5. Lewis helped secure a clean sheet and was a major force at the other end of the pitch. He bagged his first career brace, off a header in first-half stoppage time and an eight-yard volley in the 63rd minute.

"We've been playing some really good football in terms of possession, creating chances in league play,” he insisted. “We were struggling to put that final piece together and score. We were able to unlock the game with set pieces, which is important, especially at Keyworth with the field being a little bit smaller. It's important to take advantage of those moments."

As a center-back, Lewis hasn't tallied many times, scoring only twice in 45 pro league matches. He found the net five times in 84 games at Fordham.

Then came that 18-minute outburst.

Goals Bring a Boost in Confidence

"It's definitely special," Lewis said. "It gave me a little bit of confidence, attacking a bit more and being aggressive more on set pieces. To be able to take care of it and win the game is huge and sends us into the next round against an MLS team, which is also what this club's been needing and waiting for a long time."

Columbus will be a bigger mountain to climb. The 2020 MLS Cup champions own a 2-3-2 league record after dropping a 2-0 decision to Orlando City SC this weekend.

"It's a big moment playing an MLS team because the goal is always to show yourself well against opposition of a higher level," Lewis said. “We see this game as one of the most vital of this season because the club’s put so much effort into building and coming from the ground up.

Moments like these can't be taken for granted," he added.

The Crew will have to put up with Detroit's 12th man – the enthusiastic supporters at Keyworth Stadium, who are unforgiving to visitors. Detroit City is a community-oriented and community-backed team that was created by fans in 2012.


Hamtramck a Hostile Venue for Visitors

"That really plays to our advantage,” Lewis said of Keyworth Stadium – not a fun away-day for any team. “We like to think that some of these guys in the MLS clubs have it a little easy sometimes…to be able to come back and kind of humble themselves with Keyworth, it's important for us. We can use that to our advantage.

“Playing in front of our supporters is another huge challenge,” the defender added.

"It is so intense,” he went on, describing the scenes in Hamtramck on gamedays. “The lines of Keyworth are up right next to the stands. When you're on the far side, in front of the Northern Guard [Supporters], it's daunting. If you make a mistake, they're all over you. I'm talking about opposition. They'll support us, whether we're doing the best or the worst work. 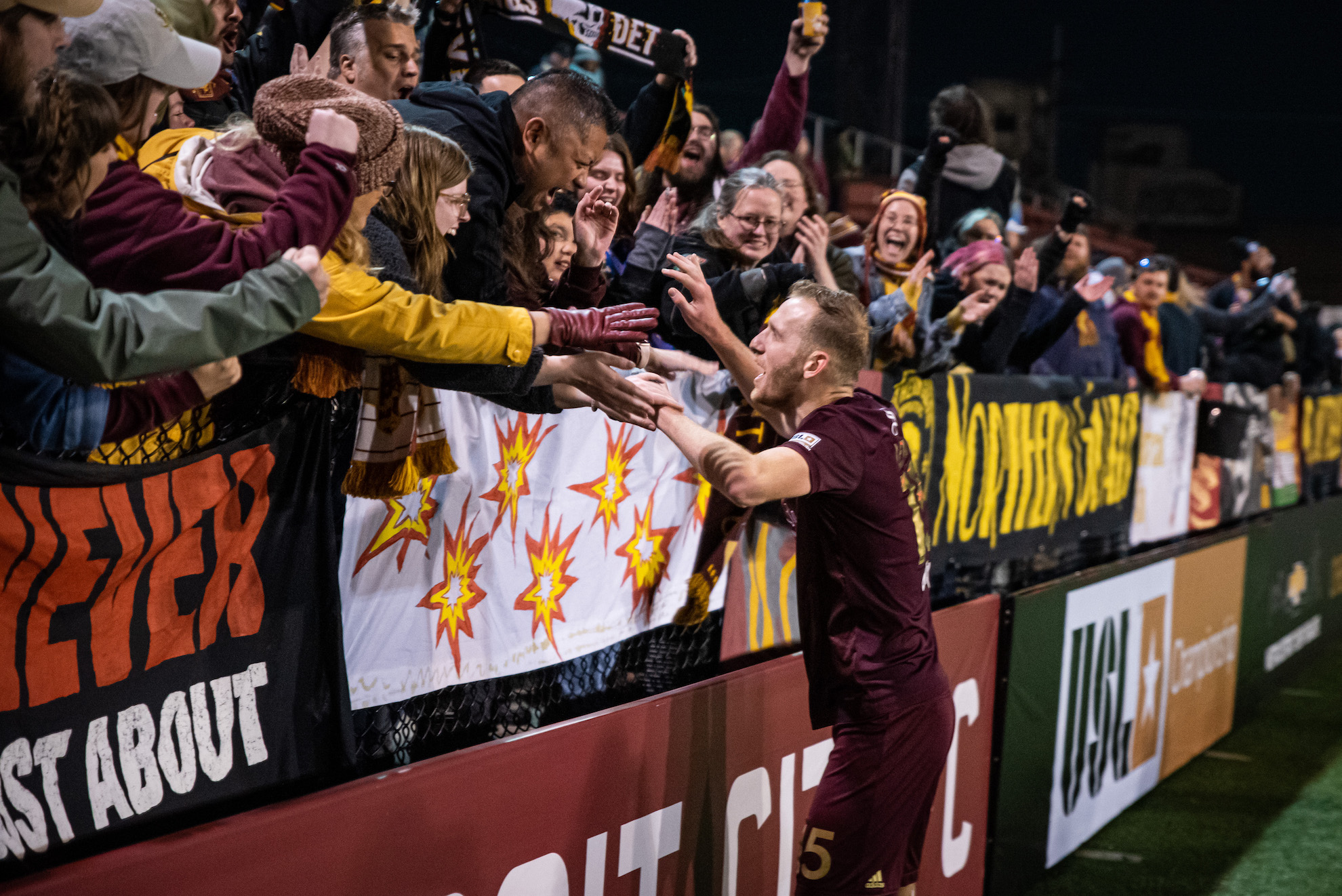 "There's sometimes where you just kind of have to laugh at how much they're hounding the opposition,” Lewis said. “It's unbelievable. You don't really get an atmosphere like that in U.S. Soccer. I don't think there's anywhere that I've been where it's that hostile, that close to you."

Growing up as a fan of Sporting Kansas City in that Missouri city, Lewis was signed by the MLS club as a Homegrown Player in 2018. He never played a match with the big team, lining up instead for SKC’s USL Championship affiliate, Swope Park Rangers, before being cut.

That disappointment could have ended Lewis' career. But he has a competitive spirit inherited from his late father Thomas.

"He knew that I wanted to be a professional athlete. He sacrificed a lot of things when I was young to make sure that this could happen," Lewis said.

"Signing that first contract and in Kansas City was a huge moment for us,” he added. “When things didn't really go as planned, we had a lot of rethinking to do. It's tough. Lower league soccer in the United States is difficult, especially as you get older because there's not a whole lot of money in it. You have to make decisions financially especially if you are looking to have a family.

“The drive just kept coming back to me," he said.

Lewis signed with the New York Cosmos, who competed in the National Premier Soccer League (NPSL) in 2019 and the National Independent Soccer Association (NISA) in 2020. His Cosmos experience was invaluable, playing with such veterans as midfielder Danny Szetela and former Albanian international captain Ansi Agoli, among others.

It was in 2021, when the Cosmos went dormant, that Lewis signed with Detroit. 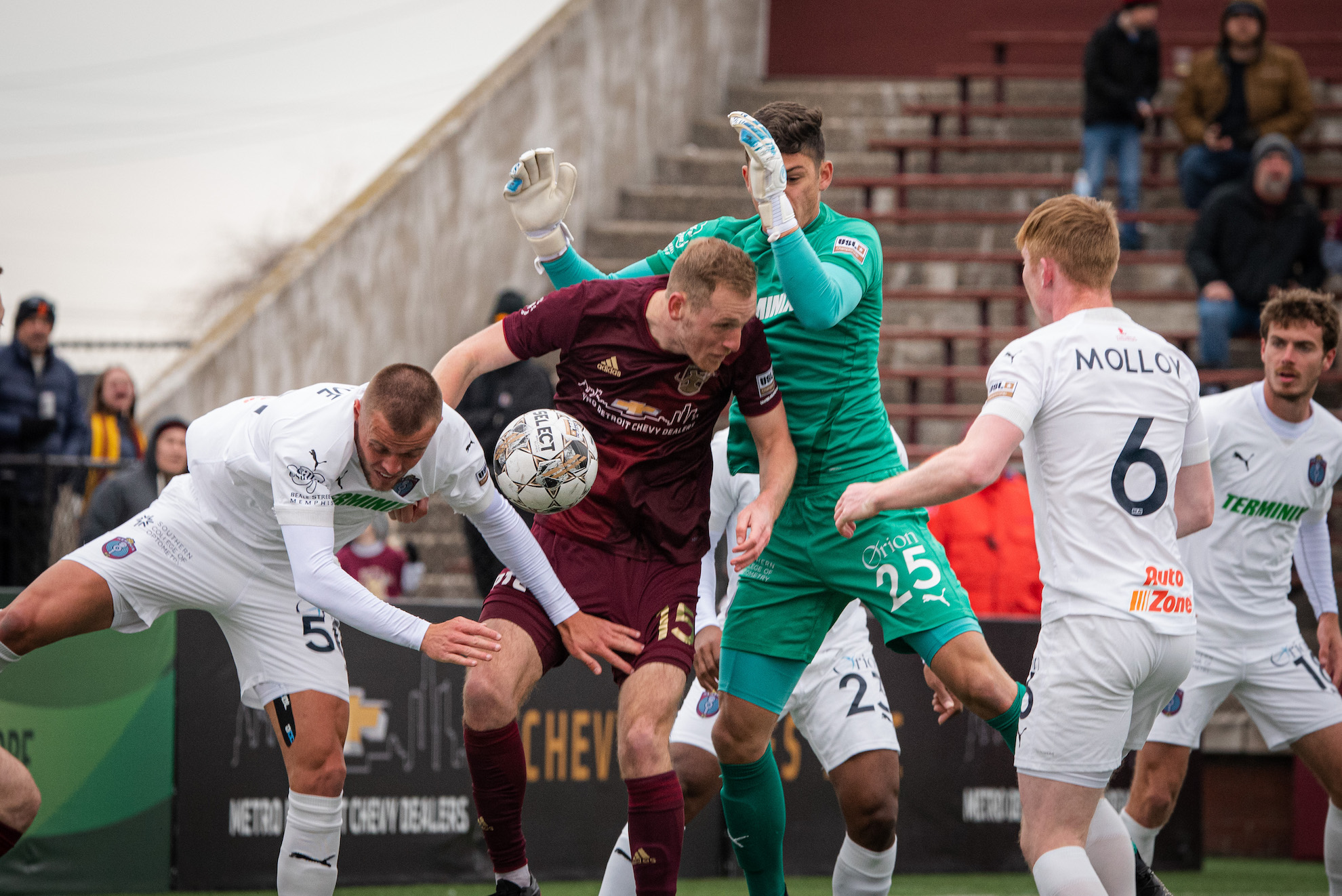 "It's a second home for me," he said of the Hamtramck-based club – who were in NISA in the third tier of the American pro pyramid at that time. "I've been welcomed here with open arms. I'm the happiest I've been professionally."

Something, however, was missing -- a chance to play at the USL Championship level and showcase his talents. Lewis got his wish when Detroit City joined the second division pro league in November of this year after winning the NISA championship for a second season running.

"Last year was special," said Lewis said, who plays indoor for the Kansas City Comets (Major Arena Soccer League - MASL) in the winter months. "We were very successful. Being in the room when the owners told us we were going USL was a very validating moment for me. I was going to have a chance to prove myself at a club that believes in me.

“This year is just about enjoying the game, enjoying being with my teammates,” he said of the move to the Championship. "They call us the NISA all-stars, which is hilarious. We love it because we're playing well.”

So far, so good for Lewis and Detroit City in their new league. After downing Birmingham Legion FC 1-0 on April 15, DCFC are fourth in the 14-team Eastern Conference with a 3-1-2 mark and 11 points.

Now it's time for Detroit City to step up at another level – in the U.S. Open Cup.

"That would be super," Lewis said, looking ahead to the possibility of slaying a giant from the top division. "That would definitely top my career memories if we can go on a run in the Open Cup and turn some heads -- beat some teams we’re not expected to beat."

It wouldn’t be unlike what Fordham accomplished five years ago, with Lewis pushing himself – and his teammates -- to the limit and beyond.