An Open Cup Hotbed Revived, Rebranded (and Redoubled) in Rochester

The city of Rochester, N.Y. has revived the spirit of the Open Cup-winning 1999 Rhinos -- with two pro sides going for the trophy in this year’s 107th edition of the tournament.
Michael LewisApril 11 2022
Open Cup

Pat Ercoli knows something about overcoming challenges as an underdog in the Lamar Hunt U.S. Open Cup.

As head coach of the Rochester Raging Rhinos a generation ago, Ercoli guided the A-League team past four Major League Soccer (MLS) clubs to win the 1999 edition of America’s oldest soccer tournament.

To truly appreciate that legendary accomplishment, it must be noted it’s the last time a non-MLS side took a victory lap with the Open Cup trophy.

As president of Rochester New York FC, the rebranded Rhinos who opened this year’s tournament with a 1-0 win over Lansdowne Yonkers, Ercoli is hoping for the best. After a four-year hiatus from all competition, RNYFC is back and playing in the third-tier MLS NEXT Pro league with hopes of re-establishing professional soccer in the city.

No doubt the Rhinos' achievement of 1999 will be difficult to duplicate – despite a positive start.

"Is there anybody that's capable of doing that?" asked Ercoli, who will see his side take on New Jersey-based amateurs FC Motown in the next round. "We really want to be the only guys that have been able to. I know it's kind of greedy, but having done something like that and not wanting to share it -- I'm pretty sure all the players feel [the same way]. From a perspective of the league and where we are, it becomes more and more difficult for somebody to achieve."

In 1999, the Rhinos ousted the defending Cup champion Chicago Fire (Round of 16), Dallas Burn (now FC Dallas in the Quarterfinals), Columbus Crew (Semifinals) before dispatching the Colorado Rapids 2-0 in the final in Columbus, Ohio.

"We had chips on our shoulders. We were a pretty unusual group, including the coach," Ercoli said with a chuckle. "We had a load of confidence. When we went to Columbus to play Colorado, we just felt we're winning."

USA pro soccer was at a different level then than it is now. MLS had but a dozen teams. And many A-League teams had players who could play at that level – but chose not to. 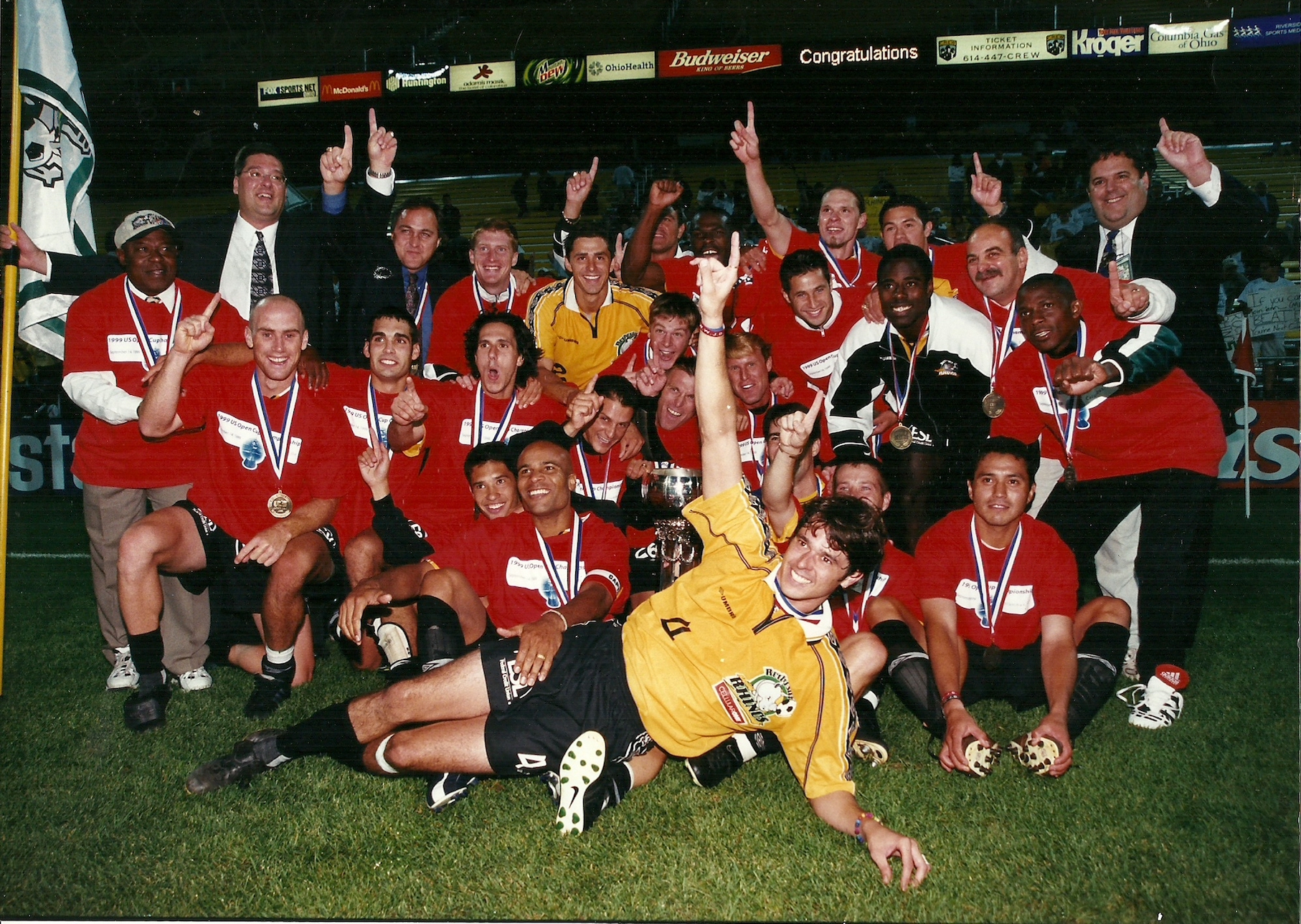 "Most of the teams were certainly stacked with great talent," Ercoli said. "Their [the MLS teams’] budgets were larger. Over the course of a season we probably wouldn't have fared as well, but in a one-to-one, do-or-die situation, we had a lot of gamers."

Leicester City standout and English international Jamie Vardy, who helped revive the club as a part-owner and who was a member of the 2020-21 English F.A. Cup winning side, is hopeful.

"The '99 Open Cup is special," he said in an email interview. "It’s the only way the lower league clubs get a chance to compete against the MLS teams. I’m the only player in the history of the F.A. Cup to play in every round of the competition and then go on to win it. Winning the Open Cup again with Rochester is an ambition that we want to replicate.

Time to believe impossible.@rnyfcofficial takes to the field for the first time today when they take on St. Louis City 2 and I couldn’t be more excited. pic.twitter.com/dvto6dEqi5

“The more people doubt us and say we can’t do it, the more it motivates us to achieve it again…It will take as long as it takes but I won’t lie to you it’s something we’ve talked about," Added the England international.

Vardy on the New Rochester Train

Head coach Bruno Baltazar said that a third-tier team winning U.S. soccer’s national championship was a long shot. But teams can dream. And they can use the 1999 title as inspiration.

"We don't have the responsibility of winning the Cup," he said. "Clubs in MLS are much more well-structured and stronger. The budgets are amazing. They can bring top players from all over the world. But it is inspirational what happened in '99. We want to chase that dream. Our keywords are believe and possible."

RNYFC aren’t the only first-year Rochester, N.Y. team vying for national glory this year. Flower City Union, who made their debut in another third division league, the National Independent Soccer Association (NISA), three weekends ago, also have designs on Cup success.

"It'd be great for us to advance in the tournament, make a run as an underdog club,” said vice chairman Mark Washo, who understands the difficulty. “It's hard."

Both clubs have had their challenges up to this point.

Under an ownership group headed by David Weaver, the CEO and founder of Rochester-based Aphex BioCleanse Systems Inc., Flower City joined NISA in 2021. Rochester native Jimmy Paola, who works in the entertainment industry in Los Angeles, became owner late last year. Wanting to establish a reputation as a community team, Flower City unveiled an opportunity for fans to own shares in the team through wefunder.com. Minimum investment was $150. Fans have pledged $63,600.

A Second Party Heard from in Town

"It's really all organic word of mouth," said Washo, the Flower City boss. "The reaction has been pretty strong."

Head coach and Rochester native Zach Agliata who, at 29, is one of the USA’s youngest pro coaches, coached in the New York Red Bulls organization in various capacities. He missed the beginning of preseason while completing his masters’ degree in coaching at the Johan Cruyff Institute in the Netherlands. 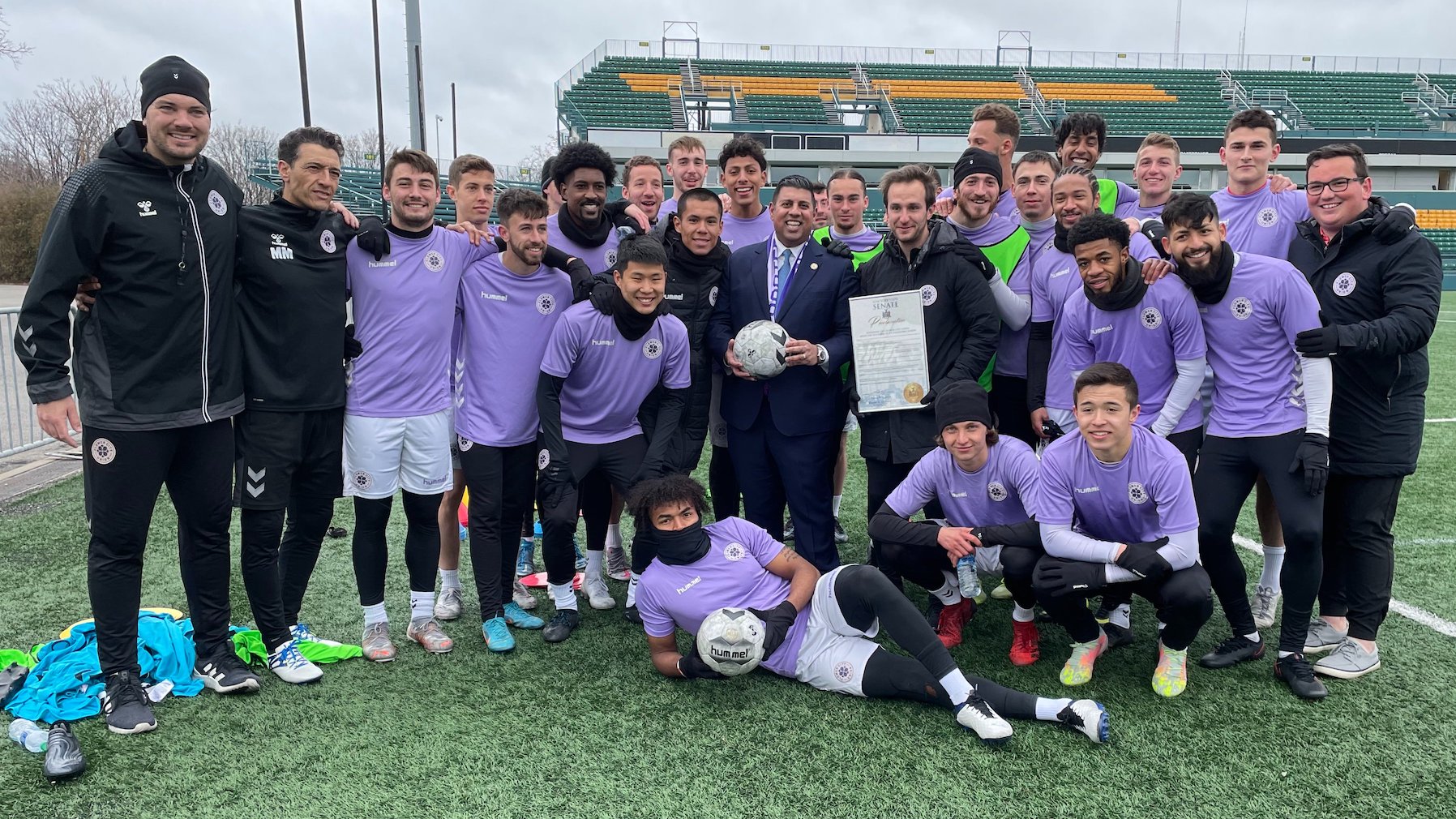 Concerned about creating the proper club culture, Agliata, before he left, told his staff to make sure the players introduced themselves to one another. "I want all the players to feel at home," he said. "I want to make sure they're all connected and getting to know each other. They all just did it naturally."

The Flower City roster is a combination of local and American talent. It includes former USL Championship midfielder Lucas Fernandes, who also played with the Rochester Lancers (National Premier Soccer League - NPSL) and defender Mitchell Brickman, who lined up for FCA 04 Darmstadt (Germany).

The big question is whether the city is ready to support two teams.

"I would say that it's probably not, in my opinion," said Ercoli, Rochester NY FC’s president and former Open Cup-winning coach. "It should be one team for this type of city. But that's what business is all about."

Washo, who stressed he was speaking for himself and not for Flower City, said there was room for two.

"It's not optimal to have two competing clubs, competing for fans. We just want soccer to be successful,” he said. “We're going to build our own community and fan base. If that turns into a rivalry, then that would be exciting. We don't have any animosity towards them [RNYFC] or wish them ill will or hope they don't do well.

BOOM! Lukas Fernandes puts it away for @FlowerCityUnion in the opening minutes of extra time. .@WMassPioneers trail at home.

“We're not trying to directly compete with them,” continued Washo – a man who believes in the bright potential for soccer’s future in Rochester. “We're just doing our thing."

Many things still need to be ironed out in Rochester’s rejuvenated pro soccer scene. But fans in the Flower City now have two teams to cheer for in the Third Round of this year’s Open Cup – a tournament where, as the 99’ Rhinos proved, anything can happen.

Michael Lewis can be reached at socwriter@aol.com and @Soccerwriter on Twitter. His book  (ALIVE AND KICKING The incredible but true story of the Rochester Lancers), is available for purchase.