CHICAGO (April 27, 2022) – For its second preparation match ahead of the 2022 FIFA World Cup, the U.S. Soccer Federation has selected Children’s Mercy Park in Kansas City, Kansas to host USA-Uruguay, presented by Allstate. The USMNT will face fellow World Cup finalists and 13th-ranked Uruguay on June 5. Kickoff is set for 5 p.m. ET (4 p.m. CT), and the match will be broadcast live on FOX, Univision and TUDN.

“We’re looking forward to facing another high-level opponent that is also preparing for the World Cup. Uruguay has some world-class talent and is one of the top teams in South America,” USMNT head coach Gregg Berhalter said. “These are the kinds of opportunities we need to continue to grow as a group and set ourselves up to be successful in Qatar. Once again we’ll have the benefit of outstanding facilities in Kansas City and a venue that has shown tremendous support for the National Team.”

Presales for the match will begin on Monday, May 2 with the public sale beginning on Friday, May 6.

For the opportunity to buy tickets before the general public, fans should consider becoming U.S. Soccer Insiders. Membership is free for Standard Insiders. Learn more.

As the official payment technology sponsor of U.S. Soccer, Visa® has made special arrangements for Visa cardholders to participate in an advance sale of tickets. These advance sales will take place from Thursday, May 5 at 10 a.m. CT to Friday, May 6 at 8 a.m. CT through the purchase links at ussoccer.com. As the preferred card of U.S. Soccer, Visa will be the only payment method accepted during the Visa presale. Terms and conditions apply.

Uruguay boasts an array of attacking talent, led by their all-time leading scorer Luis Suarez (Atletico Madrid) and Edinson Cavani (Manchester United). Suárez tied Brazil’s Neymar for second in goals scored (8) in CONMEBOL World Cup Qualifying. The Uruguayans reached the quarterfinals of the 2018 FIFA World Cup, falling to eventual champion France. For this winter’s edition of the tournament in Qatar, La Celeste were drawn into Group H with Portugal, Ghana and Korea Republic.

The USA and Uruguay have an even all-time record (2-2-3) and the match in Kansas City marks the eighth all-time meeting between the nations. An early powerhouse of international football, Uruguay was already four-time Copa America champions by the time of the first meeting with the USA at the 1924 Summer Olympics in Paris. Playing just its fourth international match, the USMNT fell 3-0 that day to a Uruguay team that would go on to win the inaugural 1930 FIFA World Cup. Uruguay won its second World Cup title 20 years later in Brazil, defeating the hosts in the championship in a famous match at Maracanã Stadium.

In their most recent meeting, a pair of MLS wingers got on the scoresheet as Jordan Morris (Seattle Sounders) canceled out a strike by Brian Rodriguez (LAFC) in the 1-1 draw on Sept. 10, 2019, in St. Louis.

In the 11 years since the USMNT first stepped on the field at Children’s Mercy Park, there isn’t a venue that has witnessed more success. Overall, the USA has amassed an unbeaten 8-0-1 record with a whopping 20 goals scored and only two against. Most recently, Concacaf selected the stadium to host all three of the USA’s group matches in the 2021 Gold Cup. The USMNT posted three victories, including a pair of 1-0 shutouts against Canada and Haiti en route to capturing its seventh Confederation title.

This is the second of four matches for the USMNT during the ‘double window’ in June. The USA begins the summer schedule on June 1 against Morocco in Cincinnati. Following the match against Uruguay, the U.S. will open its Concacaf Nations League title defense on June 10 against Grenada in Austin, Texas. Four days later, the USA travels to face El Salvador. The United States captured the inaugural CNL championship last summer in a thrilling 3-2 defeat of Mexico in extra time. 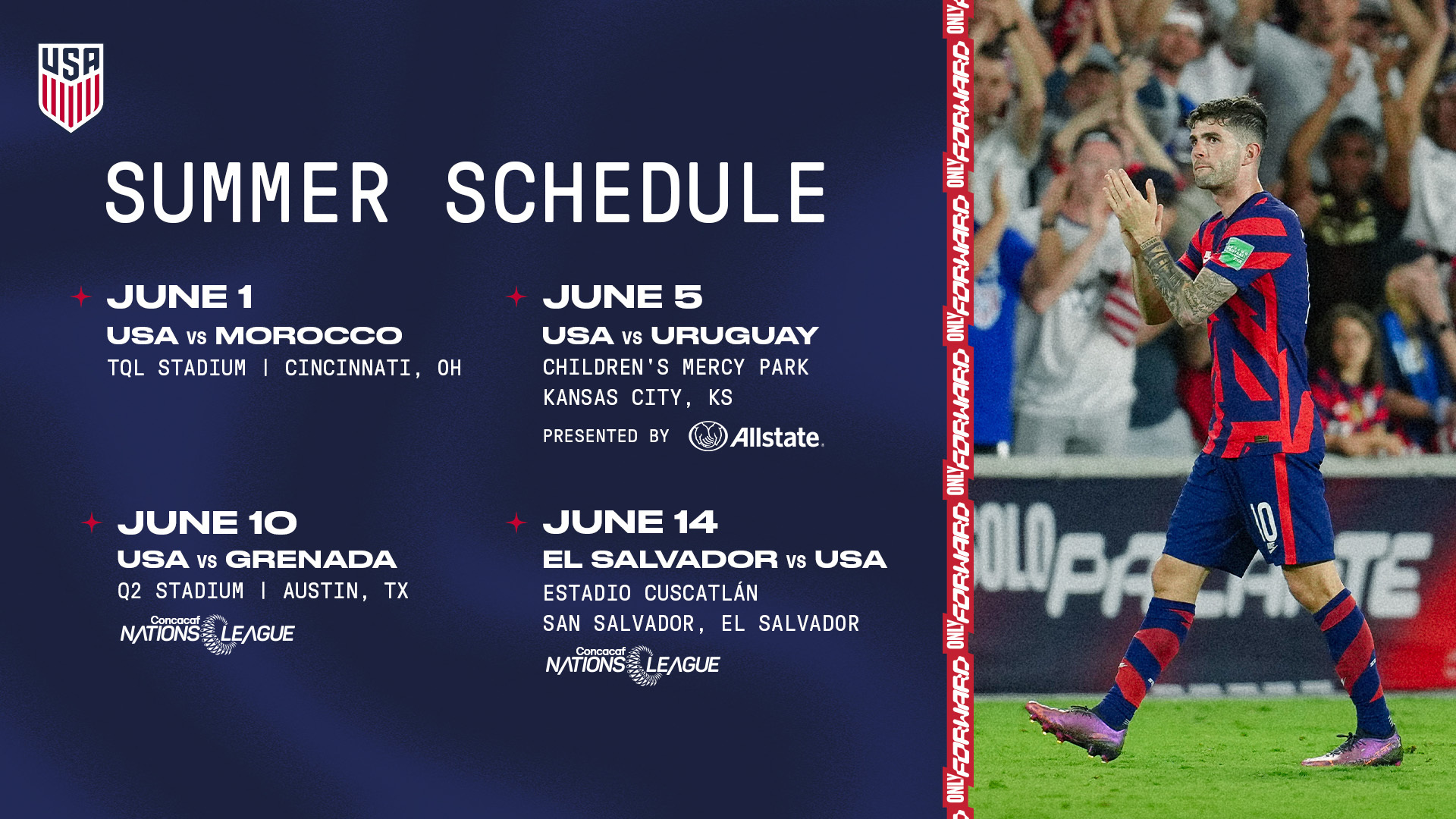 An inherent risk of exposure to COVID-19 exists in any place where people gather. COVID-19 is an extremely contagious disease that can lead to severe illness and death. You assume all risks, hazards and dangers arising from or relating in any way to the risk of contracting COVID-19 or any other communicable disease or illness, or a bacteria, virus or other pathogen capable of causing a communicable disease or illness, whether occurring before, during or after the event, however caused or contracted, and voluntarily waive all claims and potential claims against U.S. Soccer, Sporting Kansas City, Children’s Mercy Park, Ticketmaster, Live Nation, other Event Providers and their affiliated companies relating to such risks.

U.S. Soccer will follow official local health guidelines for this event. Fans are encouraged not to bring in bags of any kind. All tickets will be mobile-only. There will be reserved seating only; general admission will not be allowed. All concession stands will be cashless to reduce points of contact. Ticket holders are subject to U.S. Soccer’s Ticketing Terms and Conditions and Fan Code of Conduct.