Cameron DeLillo Scores His Third of the Tournament; USA to Face Brazil for Bronze Medal on May 15
May 10 2022
On the Pitch

SALOU, Spain (May 9, 2022) -  A valiant effort from the U.S. Men’s Para National Team was not enough against top-ranked Ukraine in the Semifinals of the 2022 IFCPF World Cup as the European powerhouse scored two stoppage time goals to clinch a 5-1 victory Thursday evening at the Futbol Salou Sports Complex.

A goal from second half substitute Cameron DeLillo sparked a front-footed final quarter of the match, but Ukraine capitalized on the USA’s attack with two late goals to advance to the finals for a sixth straight time at a world competition. Having secured its best finish ever already, the U.S. will now play Brazil in the Bronze Medal match on Sunday, May 15 at 9:30 am ET (3:30pm local), live at https://www.esportplus.tv/home .

Ukraine wasted little time getting on the board as Oleh Len made a near post run and beat USA goalkeeper Sean Boyle from close on a pass from the end line. Boyle then denied Vitalii Romanchuk on point blank chance minutes later, and Ivan Donenko with a foot save that left the Ukrainian midfielder bewildered.

Halfway through the opening half U.S. forward Shea Hammond went down injured and was replaced by Cameron DeLillo, who had the USA’s best chance when he pinged a shot off the crossbar that would have tied the match.

Instead, Ukraine doubled their lead minutes later when Donenko hit a first time shot from the top of the box out of Boyle’s reach before the break.

The challenge grew tougher seven minutes into the second half when U.S. defender John Sullivan was whistled for a foul on Romanchuk in the box. The Ukraine stepped up an converted the penalty kick with a left-footed shot low and just out of the diving attempt by Boyle to his left.

Despite the deficit the U.S. remained relentless and the game began opening up as the opportunities more clear. On a series of three straight corner kicks, DeLillo nearly pulled one back on a heel flick at the near post that was deflected just wide of the post. DeLillo then slipped a through ball to midfielder Jonah Meyer-Crothers behind the defense, however Ukrainian goalkeeper Kostyantyn Symashko came off his line and stopped Meyer-Crothers’ attempt at the top of the box.

U.S. captain Josh Brunais set the example with a tireless work rate and set up the DeLillo, who took the pass, beat two men on the left and hit a shot from the top of the box across to the far side net for his third goal of the tournament.

Meyer-Crothers came close again, but his long-range free kick skimmed the top of the cross bar. However Ukraine would put the game away as the U.S. push high with stoppage time goals from Donenko and Romanchuk.

The Stars and Stripes will next play Brazil for the third place Bronze Medal match on Sunday, May 15 at 3:30 p.m. local (6:30 a.m. ET). The teams last met at the 2017 IFCPF World Championships in Argentina, with the U.S. winning 3-2 to mark its first victory over the South Americans since 1996. 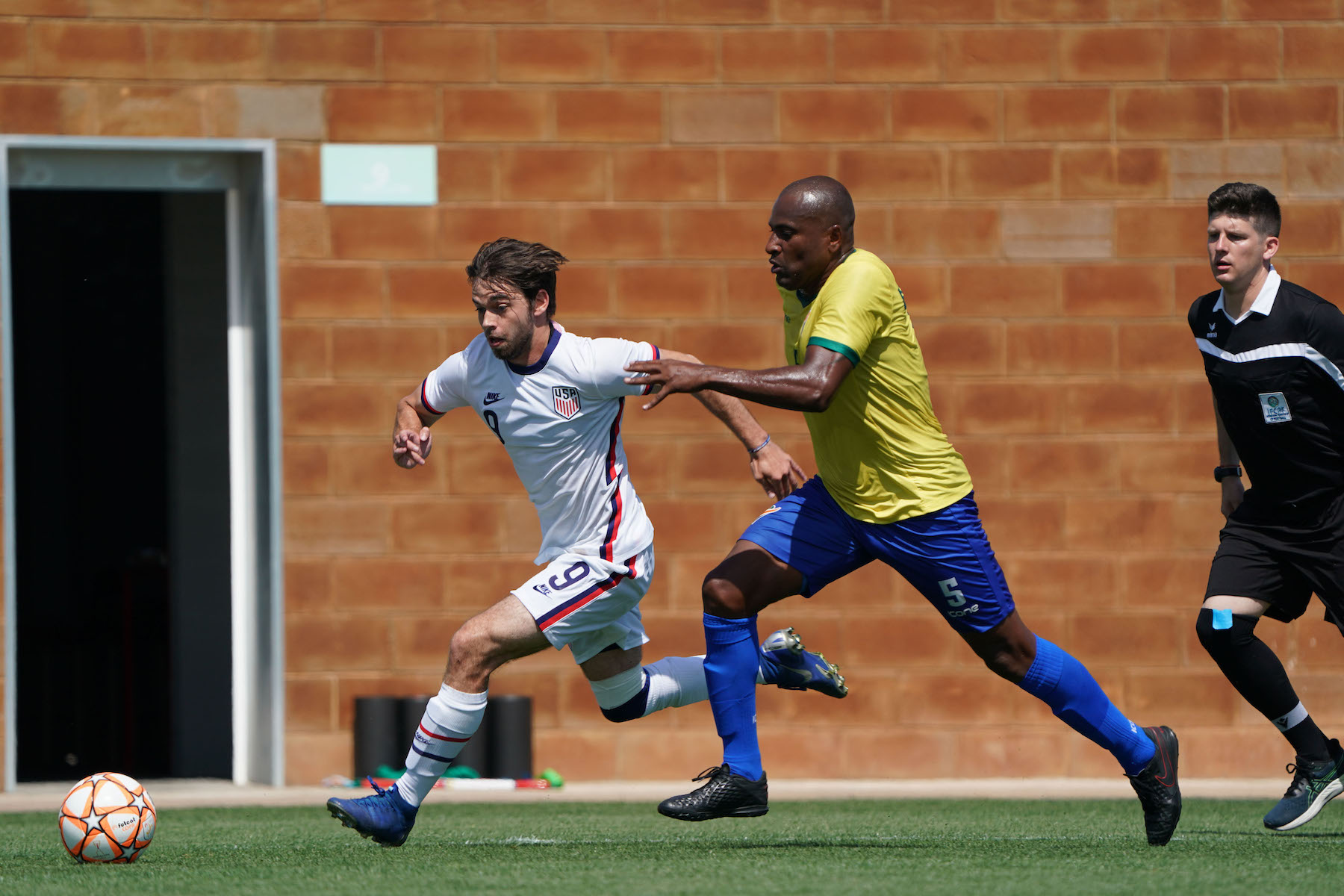