Dan Lovitz & the Essence of the Nashville Moment

The veteran Nashville SC fullback talked to usopencup.com about the tournament debutants’ current form and the deep-seated desire to not let this chance for historic silverware slip away
Jonah FontelaJune 28 2022
Open Cup

It’s the kind of finish you’d expect from a top striker.

Six minutes in against D.C. United, in MLS play this Saturday, Nashville SC defender Daniel Lovitz, who can count the goals he’s scored in nearly a decade as a pro on the fingers of one hand, put his laces through the ball to leave the keeper with no chance. Rather than bathe in the luxury of the moment, he simply turned back to the center-circle to start again.

Daniel Lovitz shows off the left!

He strikes it to give @NashvilleSC an early advantage in his 150th MLS start. pic.twitter.com/gch3dPogsj

“Dax [McCarty] was the party police there,” laughed Lovitz, describing how his veteran teammate, and an MLS fixture, forced him back to a celebration the goal more than warranted. “It was early on in the game and I guess I was just focussed on how much work was still left to do.”

Nashville SC’s full identity was on display in that 3-1 win over D.C. United. The stingy defense. The fighting spirit. The opportunistic attack. And it came just three days before the third-year MLS side from Tennessee travel to Florida to take on Orlando City in the last 2022 U.S. Open Cup Quarterfinal.

“I was excited to get on the scoresheet; to contribute in that way at a time when our offense has been clicking,” added Lovitz of the win that also saw Hany Mukhtar, the reigning MLS Player of the Week who’s up near the top of the league’s scoring charts, grab two. “Getting little contributions from all over the field speaks to the way we go about our game – and it puts us in a good mental space.”

There’s no ignoring the fact that Nashville SC’s attack is clicking into a higher gear. In their last nine games they’ve scored 17 goals (with five goals from two games in the Cup). For a team with second-highest age in the league, and one built with a mind to being what Lovitz describes as “a defensive stalwart,” this kind of output is nothing to sneeze at. 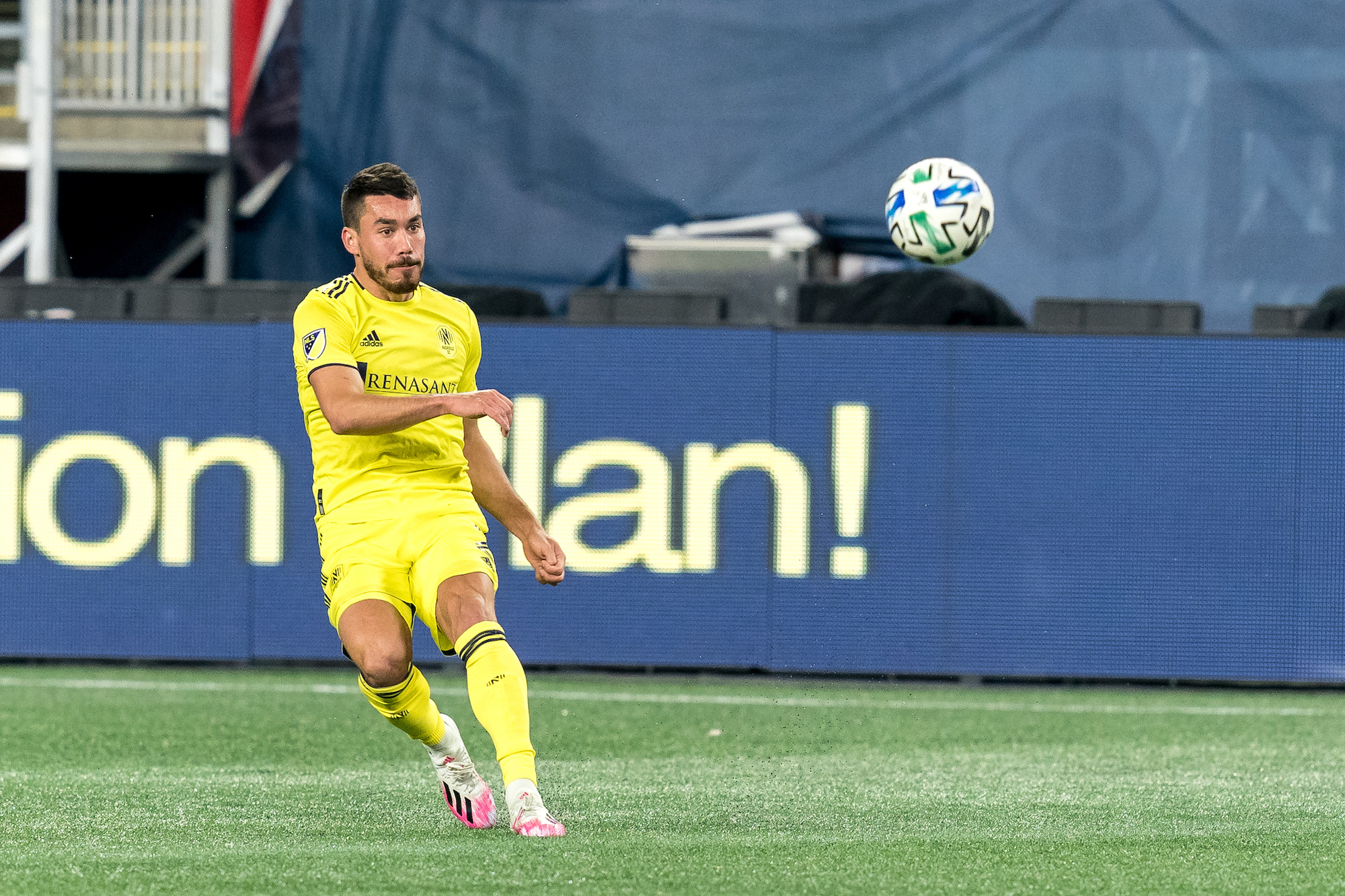 “It’s no secret that when we started in MLS, we tried to lean on veteran guys with experience,” said the 30-year-old Lovitz, who helps marshal a backline led by USMNT center-back Walker Zimmerman and 35-year-old midfield veteran McCarty. “Some people might say it’s an old team, but we’re still incredibly competitive. This group is growing and I live it every day.”

It’s now time for Nashville to turn attention to the business end of the Open Cup. It’s a huge opportunity for the club, where Lovitz has been from the very beginning of life in MLS back in 2020. It’s also the perfect showcase for the team’s many veterans who, as he says “have been there and done that.”

A Chance in Need of Taking

For Lovitz, a 13-times capped (all in 2019) American fullback, who’s direct and thoughtful when talking about the game, it’s a chance that just can’t be wasted. “It feels great, to be honest,” Lovitz remarked about Nashville landing in the Quarterfinal of their first Open Cup. “There’s a different temperature to these games. In these later rounds, it just feels different.” 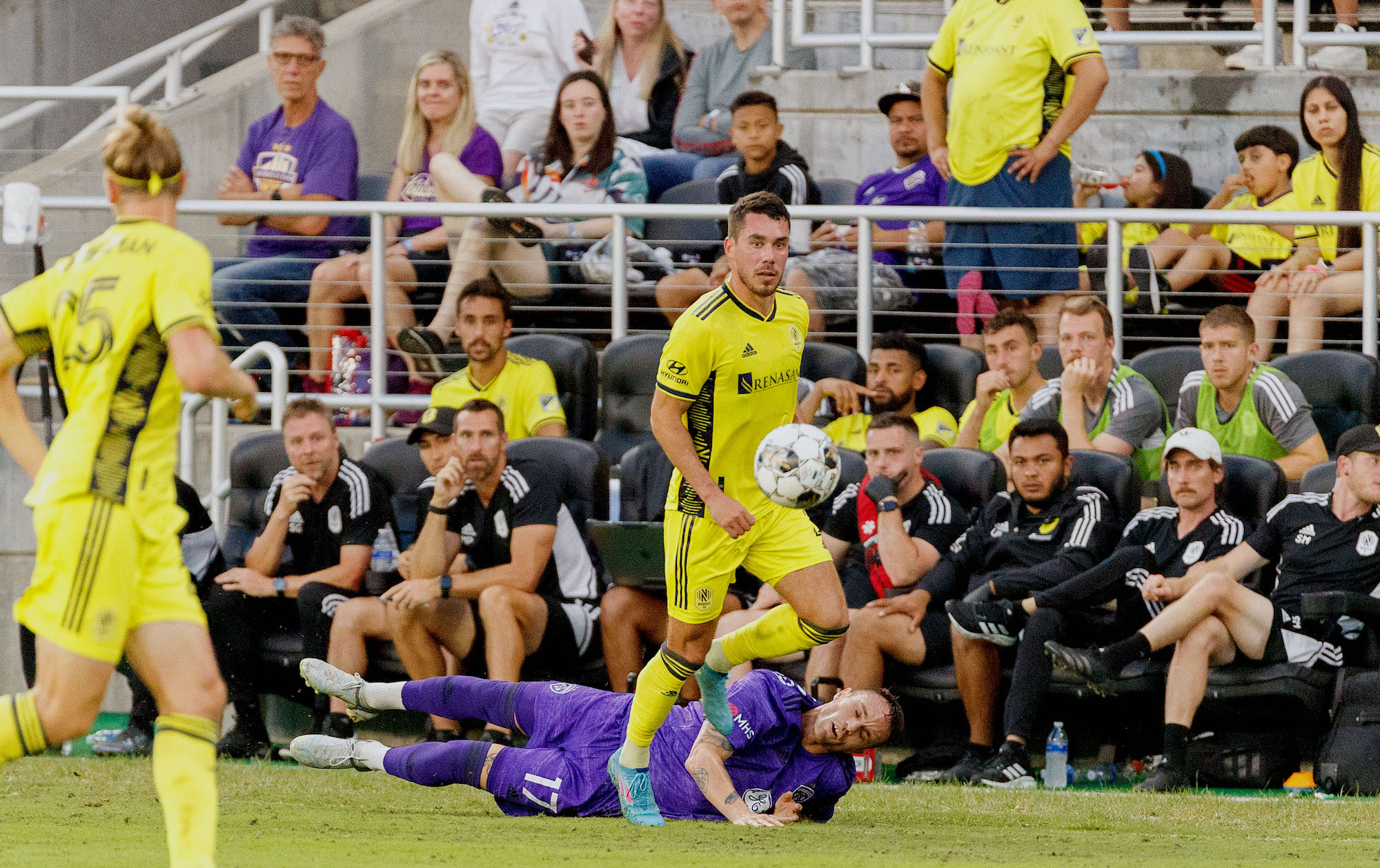 Different – and difficult – describe both of Nashville’s Cup games to date. Hosting defending champions Atlanta United in the Round of 32, the home side were harshly deprived of a late equalizer by Zimmerman and needed extra-time to seal the deal (3-2). It was one of the first games played at their brand-new stadium and the atmosphere bordered on the electric.

“You find out who you are in moments like that,” Lovitz said of the game at Geodis Park, whose final phases of construction forced Nashville to head out on an extended road trip early on in this MLS season. “To go down to Atlanta and come back the way we did – the energy just came easier that night.

Back at it in the @opencup on Wednesday

“It felt different than just your average MLS game,” he added of the evening, which led directly to the Round of 16 contest on the road against Championship powers Louisville City – a game that required a late goal from high-flying Mukhtar to settle the score (2-1).

It’s clear that the Cup – and the possibility of winning his club a first-ever trophy – matters much to Lovitz.

“The Cup represents an all-inclusive competition in this country, and to say you’re the best would be an honor,” said Lovitz, born and raised in Eastern Pennsylvania before becoming a collegiate standout and a member of the U.S. Men’s National team that finished runners-up in the 2019 CONCACAF Gold Cup. “In our early years as a club, it’s a chance to win silverware and it’s not even wintertime yet…

“If you look at any generation of MLS, those teams that were putting together consistent stuff in the league were also competing and winning in the Open Cup,” he added. “There’s a direct connection there.” 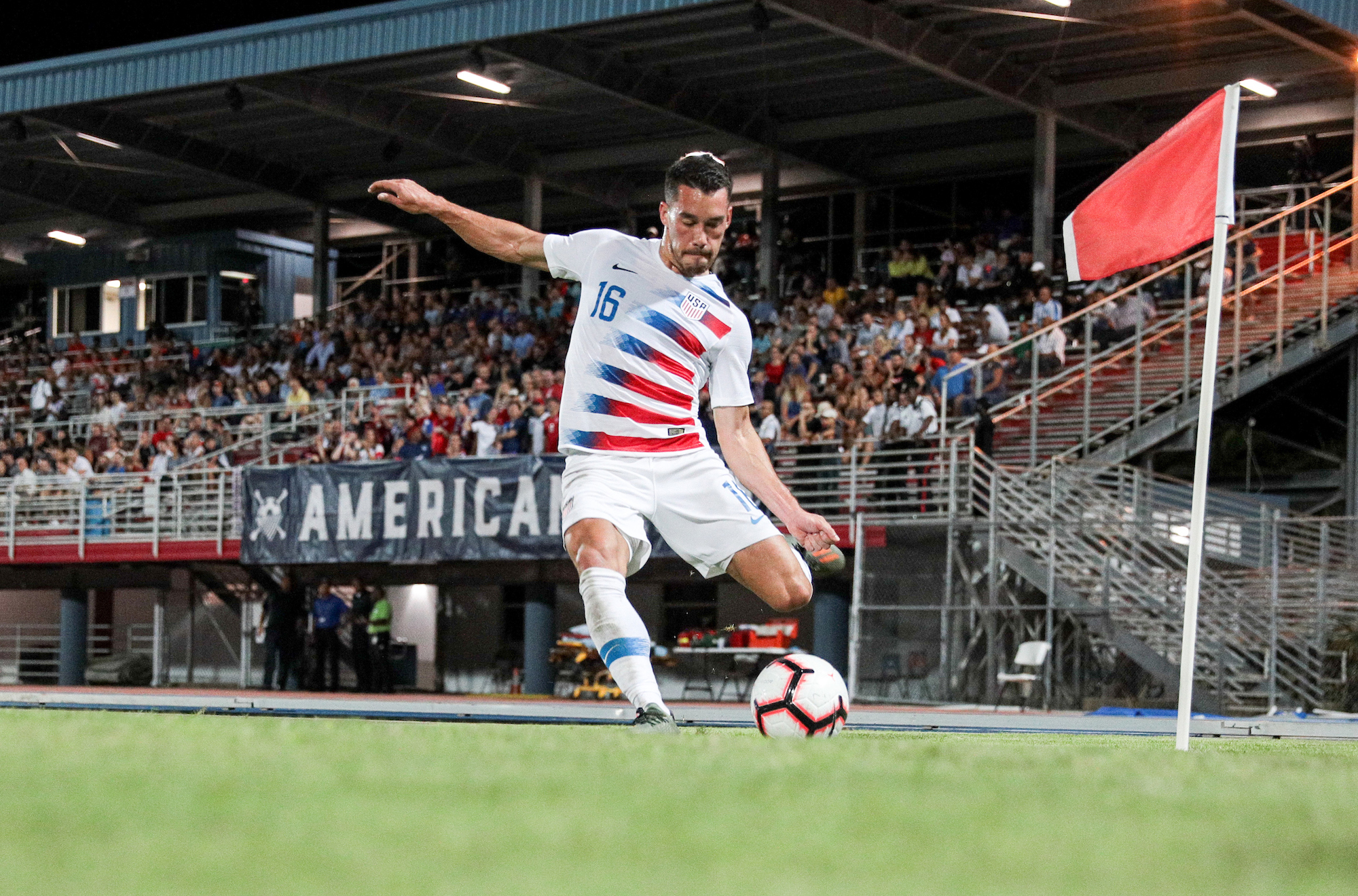 Lovitz is no stranger to domestic cup competition. In his six seasons in Canada, first with Toronto FC and Montreal Impact (now CF Montreal), he won two Canadian Championships – that country’s version of the U.S. Open Cup.

“I look at my two medals every day,” said Lovitz, who also played in the qualifying rounds of the Open Cup with Carolina Dynamo (then of the PDL) while on summer break from college play at Elon University Phoenix. “And being back home in the U.S. feels natural – and getting back in the Open Cup makes me feel like a kid again.”


Fate has handed Nashville SC an upper hand in the hunt for the Cup. Last week’s Draw sees them now in pole position to host both the Semifinal and Final at their new stadium. All they have to do, of course, is beat 2019 Semifinalists Orlando City on the road on Wednesday to start heading down that road. 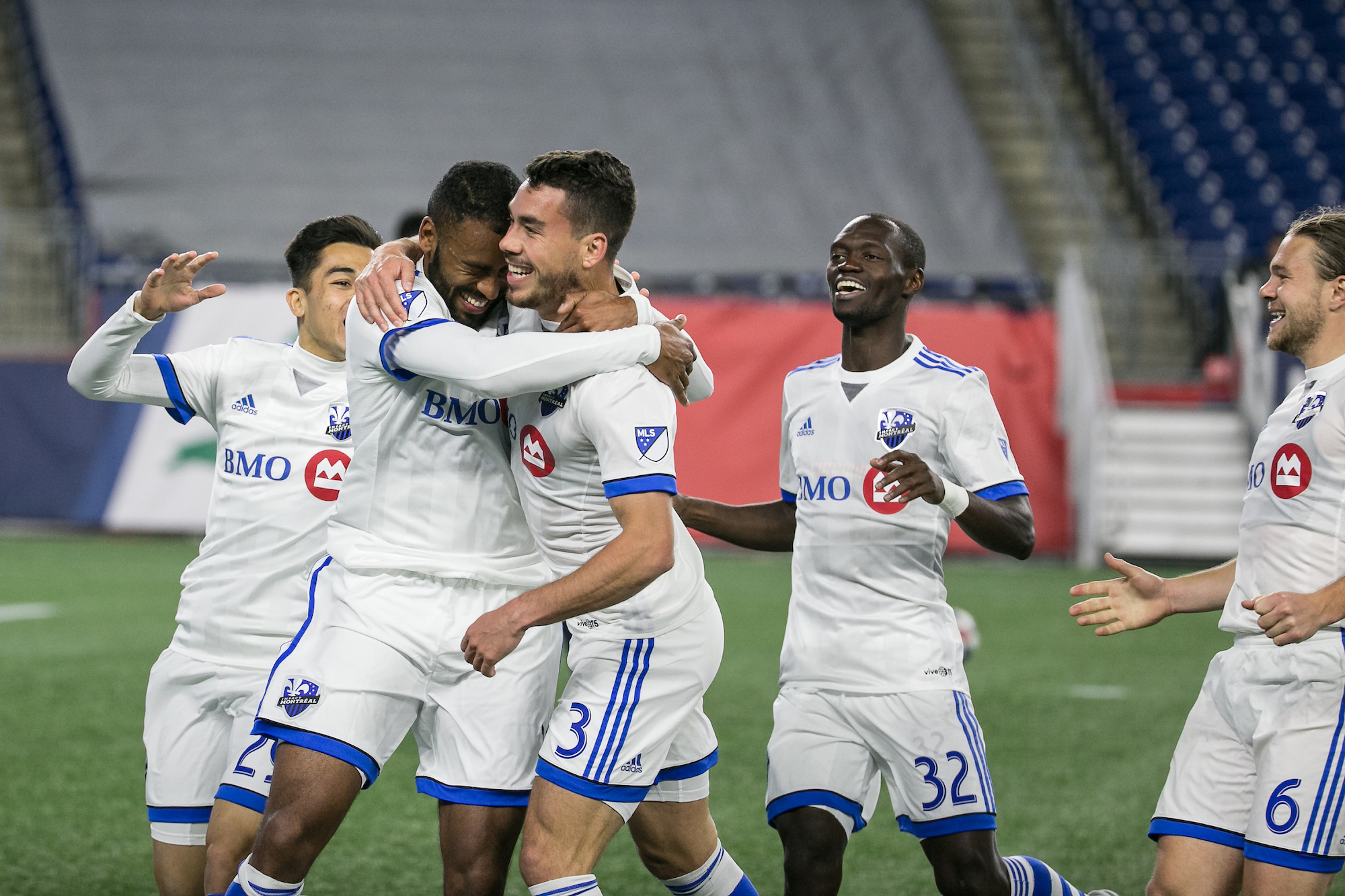 “We’ve acknowledged it as an opportunity,” said Lovitz. “We have to go about our business and go play in a difficult place [Orlando] and have that [the hosting scenario] firmly in our minds. It’s not something you can ignore.”

For a player who’s all business on the field, the possibilities alive for the club he’s helped to define are too precious to let slip away.

Lovitz with the left 🚀 pic.twitter.com/l61BrQxm14

“We’re in the later stages of a competition and two games away from being back here and hosting a Final,” finished Lovitz, a man who knows better than most how rocky that short road can be. “We’re on the precipice of a Semifinal.

“I’d be lying if I said this week didn’t feel a little bit special,” concluded the no-nonsense defender, ready to do whatever’s needed in a hunt of silverware and history both.