Title IX Was Passed Into Law 50 Years Ago, Opening Opportunity for the U.S. Women’s National Team and Countless Other Women in Sport and Beyond
Michael LewisJune 23 2022
Featured

While growing up in Hialeah, Fla. in 1974, 10-year-old Kim Wyant loved to compete in sports.

"I was basically like a park rat," she said. "I was a girl playing with the boys in the 1970s, which was not common."

When they learned a baseball team was being formed, Wyant and her 12-year-old brother Andy wanted to try out.

"I remember vividly the male coach out there," she said. "I walked up to the coach. He said, ‘No, you can't try out for the baseball team. No girls are allowed to play baseball.’ "

An upset Wyant rode her bicycle home six blocks from the park and told her mother that she been denied the opportunity to play. Her mom immediately drove down to the park and confronted the coach.

"You're going to let my daughter play baseball, or I'm going sue you for discrimination," her mother said.

Added Wyant: "She goes on to tell me that she actually had to meet the city mayor and the officials of the city. She basically told them, ‘Look, there's this thing called Title IX now and you're going to let my daughter play or I’m going to sue you. That was my first introduction to this Title IX."

Two years before in 1972, Title IX, which prohibits sex-based discrimination in schools or education programs that receives funding from the federal government. June 23 is the 50th anniversary of the day when it went into effect. The late Sen. Birch Bayh (Indiana) introduced the bill in 1971.

Playing baseball was a small step at the time, but a huge one for Wyant. By the time she attended high school, more sports for girls were added, including soccer.

"It just opened so many doors for me, gave my life that has led me really to where I am today," said Wyant, who backstopped the U.S. Women’s National Team in its first game in history in 1985.

"I was in the right place at the right time. I benefited from those people who've made those decisions to start the Women's National Team," Wyant said. "It was just another step that I was able to take that just furthered my career, but it also helped me be a better person."

Many former USWNT standouts echoed Wyant’s remarks about Title IX's impact and influence on their lives.

"It was life changing," National Soccer Hall of Famer and goalkeeper Briana Scurry said. "Title IX really opened the doors for so many of us to run through. I think, for me, it was crucial, because with the the advent of Title IX, a lot of universities and colleges were adding scholarships and money for females in the form of soccer, which had larger rosters and was a good sport to be able to meet the mandate for being compliant. That just made a lot of sense for me to continue to play soccer. My parents didn't have a lot of money and I needed to get a scholarship to go to college. So Title IX really helped me being able to realize that dream." 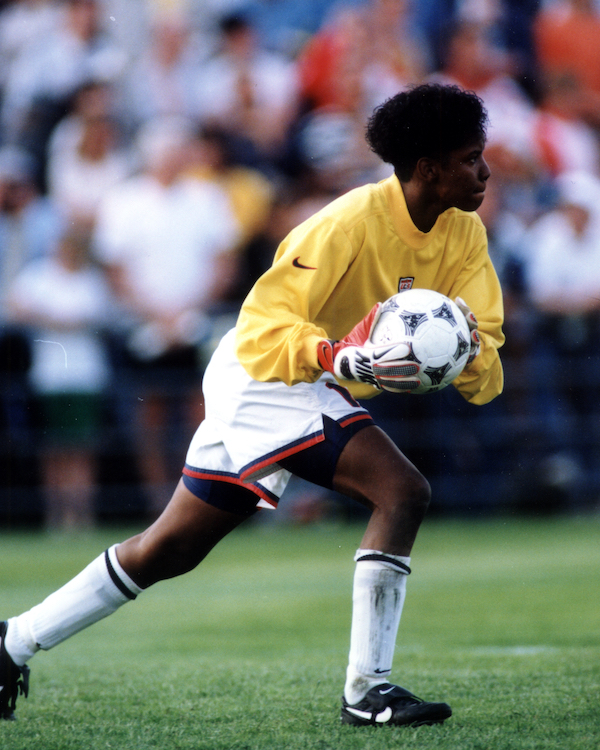 “I wouldn't be here without Title IX," said midfielder Shannon Boxx, who was inducted into the NSHOF this year. "Every female athlete in my generation and now behind me is so thankful for it. My mom was an athlete. I asked her; 'Were you able to even play in school?' She's like, ‘no, I wasn’t’. The opportunity for me to play sports created this person, the skill sets that I have, to move on, into my next chapter, are greater than what most people have because what sports taught me. It gave me this confidence. It gave me teamwork. All of these things that I would probably not have had in an education." 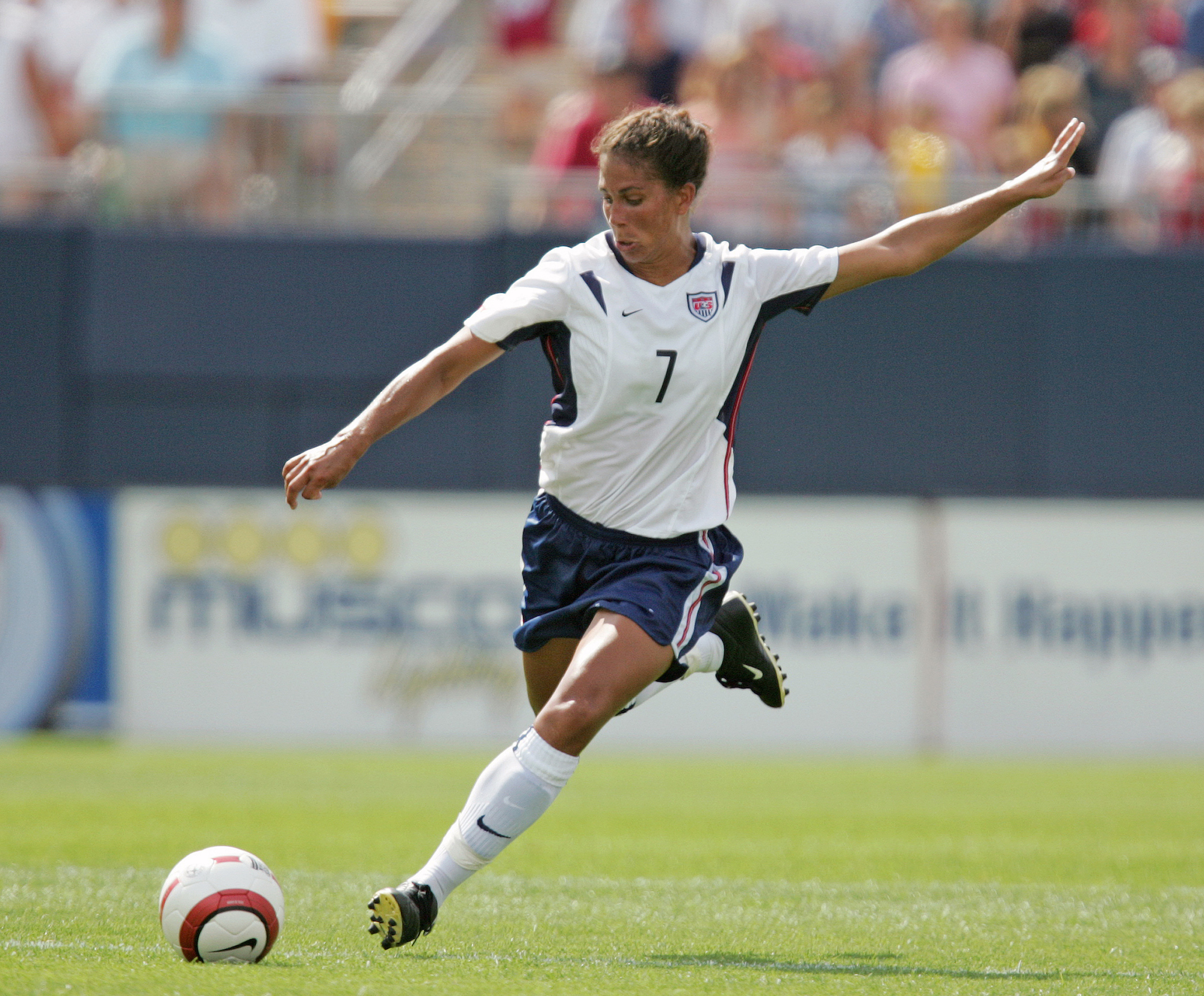 "If it wasn't for Title IX, I wouldn't have probably gone on to college and play sports,” said defender Christie Pearce Rampone, another 2022 NSHOF inductee. “I wouldn't have been able to experience playing two different sports [also basketball] and then walk on a soccer team, making it to the highest level and being able to compete. I'm very grateful for the fact that Title IX exists and gave us as females the opportunity to try to become the best authentic self that we could be. I didn't know that at the time where my path was going to take me. I knew I love sports. I love to compete, but that I was able to get a full scholarship and not have any debt coming out of college in 1997, it allowed me to get my education and be able to play sport I love." 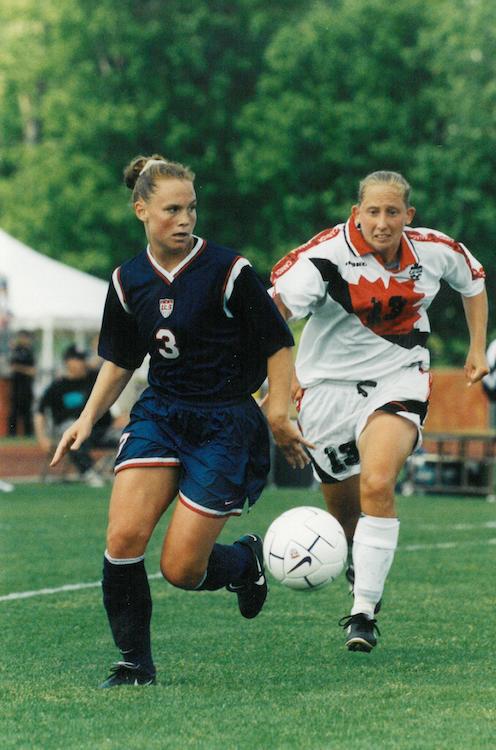 "U.S. Soccer was a big part of that because you go to these other countries and see the support in other countries," said another Hall of Famer, defender Carla Overbeck. “Many women fought before us, so that we could play soccer and we were very appreciative of that. Billie Jean King comes to mind. She was a huge proponent of equality for women and fighting for the right to play. ... We would go to other countries and people that would come watch and those countries were just started out with their Women’s National Teams. We were very fortunate with the work that women did before us. We got to reap the benefits, and with National Team, we helped other countries with their contracts." 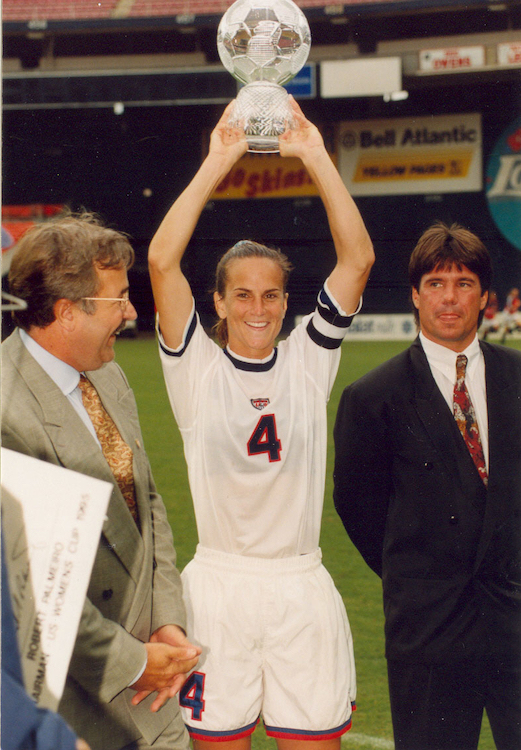 There is little doubt that the USWNT would not have been formed and grown at such a rapid rate had it not been for Title IX. Only six years after playing its first international match, the USA captured the very first Women's World Cup in China in 1991.

American women have dominated international soccer, having reached the semifinals in 14 of the 15 competitions - the World Cup or the Olympics. The USA was eliminated in the 2016 Rio Olympics quarterfinals, the only blight on its record.

"The U.S. Women's National Team is truly an example of going to find excellence," Scurry said. "We have won a championship in every cycle, either a World Cup championship or Olympic championship. That lineage of excellence on the pitch is truly something that I think wouldn't have existed without Title IX. How can you help women even be able to compete in such a way and dominate a world sport the way we've done if not for Title IX? That really helped us get a great jump on everyone else in women's soccer."

Title IX did not just have a giant impact in soccer. It created a tsunami in other sports. When the USA secured the first women's soccer gold medal at the Athens Summer Games, women's events grabbed the spotlight.

"Look at the '96 Olympics, when women's soccer, women's softball, women's basketball, women's gymnastics, synchronized swimming, I mean, you went down the list of women's team sports that were just crushing it," said former USWNT captain Julie Foudy, a member of that gold-medal winning squad. "And not just team sports, individual as well. There's a reason why the U.S. has been so dominant for so long in women's sports, and that's thanks to Title IX.

"You have athletes who try and come over from other countries because they know that's where the opportunity lies, scholarships through college. It all comes back to one of the most profound civil rights laws we've had in this country and it’s had an impact on so many different areas for women." 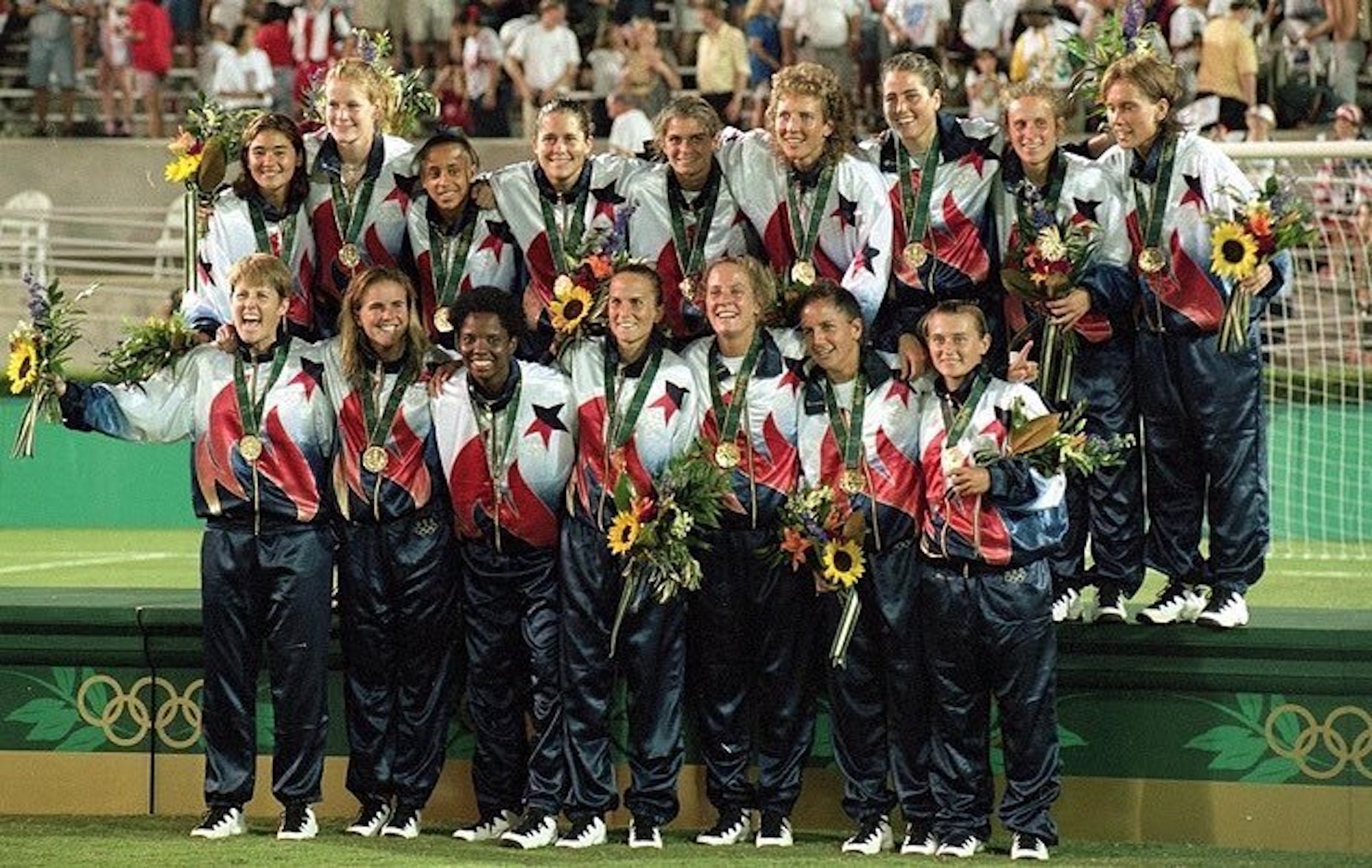 U.S. Soccer President Cindy Parlow Cone said Title IX had a major impact on her life in so many ways. Parlow Cone was an All-American at the University of North Carolina, a member of the 1999 Women's World Cup championship team and was recently elected to a full term as President of U.S. Soccer.

"It afforded me the opportunity to go to a top university to keep playing my sport that I love and launched me on to the National Team and then fast forward a few decades to President of U.S. Soccer," she said. "I owe Title IX a lot because literally I'm in the seat that I am in is a large part due to Title IX and all the things that did it gave me both in high school, into college.”

Title IX also has influenced women's soccer and sports in other countries indirectly, though it has taken much longer for females to break their glass ceiling.

Foudy remembered when she and Stanford University teammate Heather McIntyre spent a semester in Barcelona in 1992. The USA had won the first World Cup the year prior, but the women's soccer wave hadn't reached many countries.

"The two of us would go and play pickup in Barcelona with another American who lived there who said, 'Hey, you should come play with these guys I play with. They're great,' “ she said. “They would stop the game and once we started playing, it'd be like, 'Where are you from? You're clearly not from here. And why are you playing football?’ They didn't get it. Now we see the popularity in Barcelona, what their women's team is doing, but it took a whole another 30 years - a generation and a half - to get there."

In the Round of 16 in the 2019 World Cup in France, Spain dropped a 2-1 decision to the USWNT, a game decided by Megan Rapinoe’s 75th-minute penalty kick.  Many observers tout Spain as a potential power.

Beyond Parlow Cone, Foudy saw great changes in the board rooms of businesses. 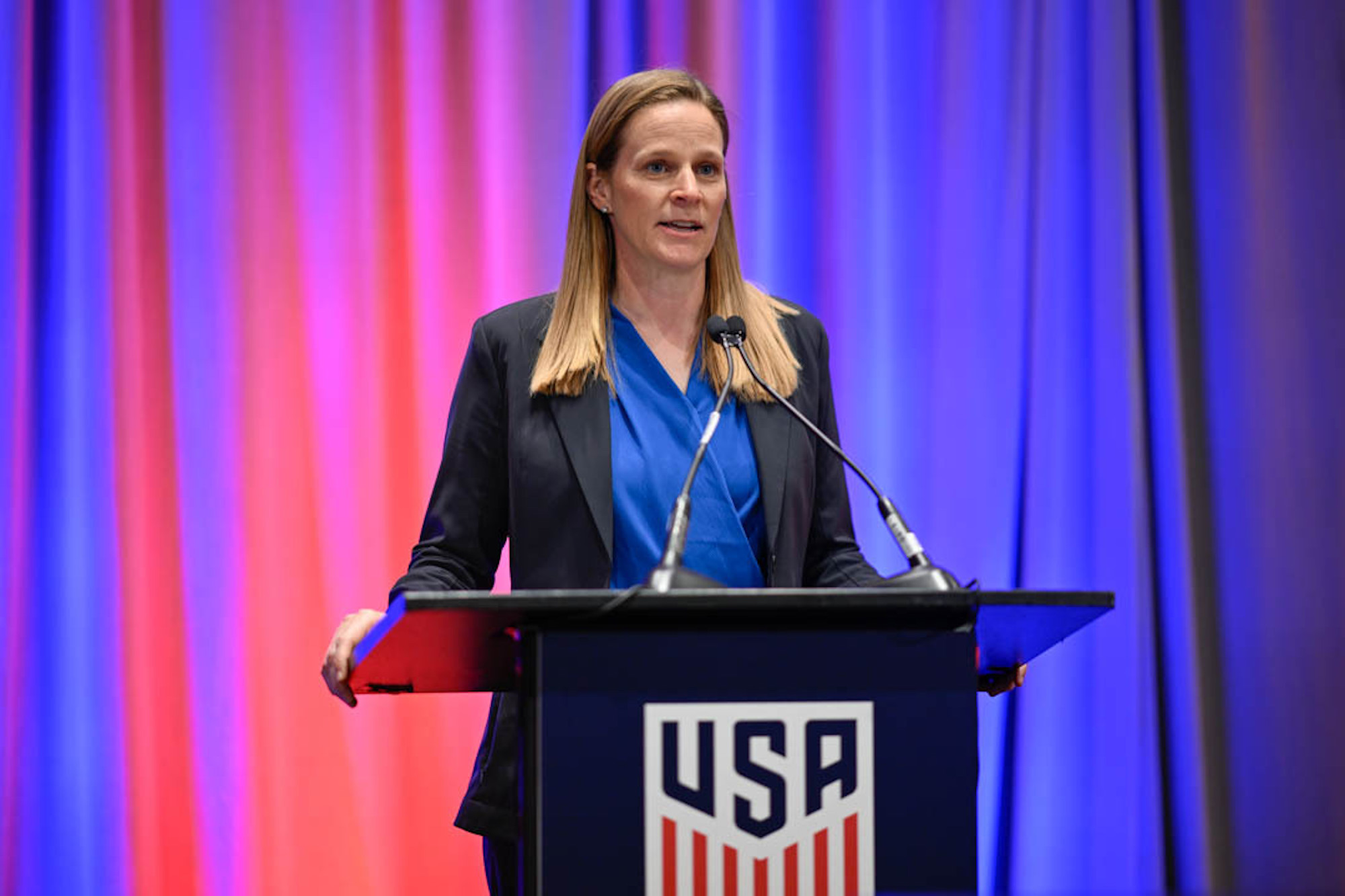 "In these next 10 years, we're going to see this growth of companies and women-led companies, women-led sports teams, all these things in so many different silos, not just sports. The real beauty behind this law is that women are leading. I've always said the first female president will be a female athlete. This is the power of what this law has laid this foundation for. We're just now starting to see the benefits and reaping the rewards of it."

Eventually, Parlow Cone would love to see Title IX go by the wayside.

Asked where she wanted to be in regards to Title IX in 50 years, Parlow Cone replied, "obsolete."

"I don't want to have to have Title IX. I want equal opportunities, equal investment for men and women in every field, including sports, because it’s the right thing to do" she added. "In 50 years – that’s a really long time like, so I hope in like in 10 years to be there - but I think I'll say that we have arrived. We've done it when we don't need Title IX anymore."