Ryan Meara is the long-time back-up goalkeeper for the New York Red Bulls – a club that, since its founding in 1996 as the MetroStars, has yet to win an MLS or Open Cup
Michael LewisJune 21 2022
Open Cup

Ryan Meara just might be the most patient player in all of Major League Soccer.

Since enjoying a stellar start in his rookie season in 2012, the New York Red Bulls goalkeeper has had to play second-fiddle to the likes of Luis Robles and Carlos Coronel.

We love doing this 🔴❤️ pic.twitter.com/rnX197mDTP

Now, that certainly isn't the end of the world given those two keepers' resumes and accomplishments, but it can get frustrating because Meara feels that he has something to bring to the table. "It was definitely tough when I was younger," said Meara, who has played more Lamar Hunt Open Cup games (15) than any other Red Bulls player.

The former Fordham University standout performed well for a first-year keeper before a hip injury shut him down for the rest of that 2012 season.

"Coming into the league, starting that first half of that season and doing pretty well, we were in first place when I went and got hurt," he said. "Up until that point in my rookie year that's all I knew as a pro. In my thinking I was like, it was an 8–10-month recovery and then I'll feel good and just get right back in and be the starter again."

Near the end of that season, though, Luis Robles was signed by the club and embarked on an MLS-record 183-game streak in goal that ran through May of 2018.

"It doesn't always work as you have it mapped out in your head," added Meara. "For me, he [Robles] was one of the best – if not the best and most consistent – keeper in the league for those years. To be behind him is no insult. I think he could start on any team in the league.

"As I matured, not that it became easier, but I learned how to cope with it.” said Meara, who’s become philosophical about his circumstances.  “Being a goalkeeper is the best position in the world if you're the guy starting because you play every minute of every game and it's the worst position in the world if you're not because you're the guy on the bench – and you never get subbed in." 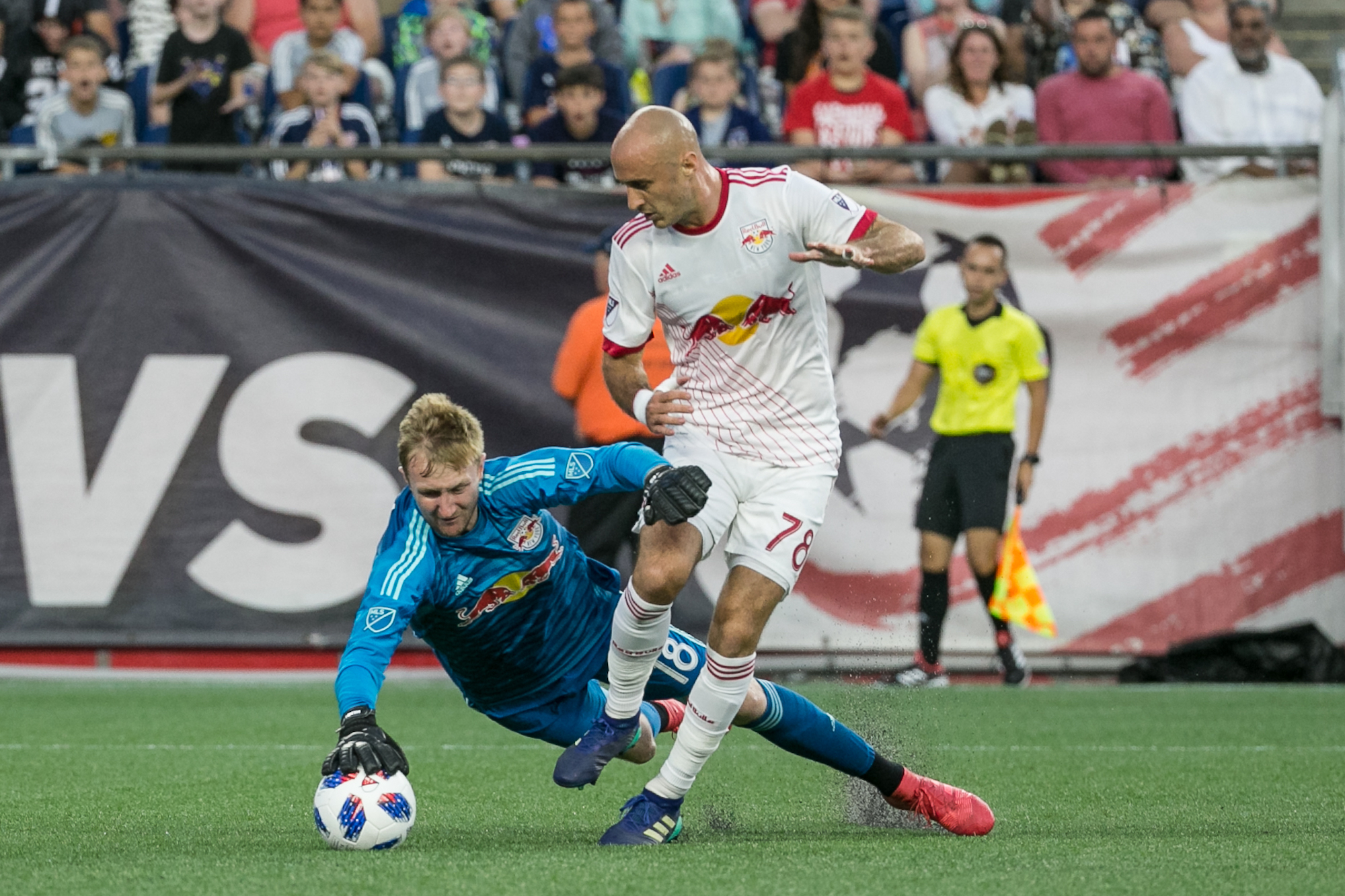 Meara, now 31, learned to stay focused and prepared because you never know when your next opportunity will knock. The starting keeper could suffer an injury or be red-carded, and you’ll be called on to enter the game cold.

"I've seen over the years how important it is to just constantly stay ready because you never know when your time is going to come," he said, remembering back to the Red Bulls Open Cup run in 2017 in which they lost in the Final. "I had a big part of that run, and I was so proud. When my number is called I just step in and be ready and help the team win."

In 2018, Robles' starting streak was snapped when he was sidelined for several games. Meara made some big saves in the 3-1 win at Atlanta United that May 20. It was a vital three points as the Red Bulls wound up winning the Supporters' Shield by two points over their rivals.

"Just to be able to step in and do your part and help the team win, it's the best feeling," Meara said.

"There's no excuse that this guy hasn't played in a while. You have to be ready and help your team win," Meara went on. "That's just how I go about my business. I always say if you always stay ready, you never have to get ready. It might be the boring cliche answer, but it's just training every week like you're the guy playing on the weekend.

“Even though I haven't started as much as I would have liked over my career, I think that's why I've been able to stick around and have an 11-year career,” he said. “It's just making the most of the opportunities when they come."

Besides, Meara knows how fortunate he is to have a professional career. 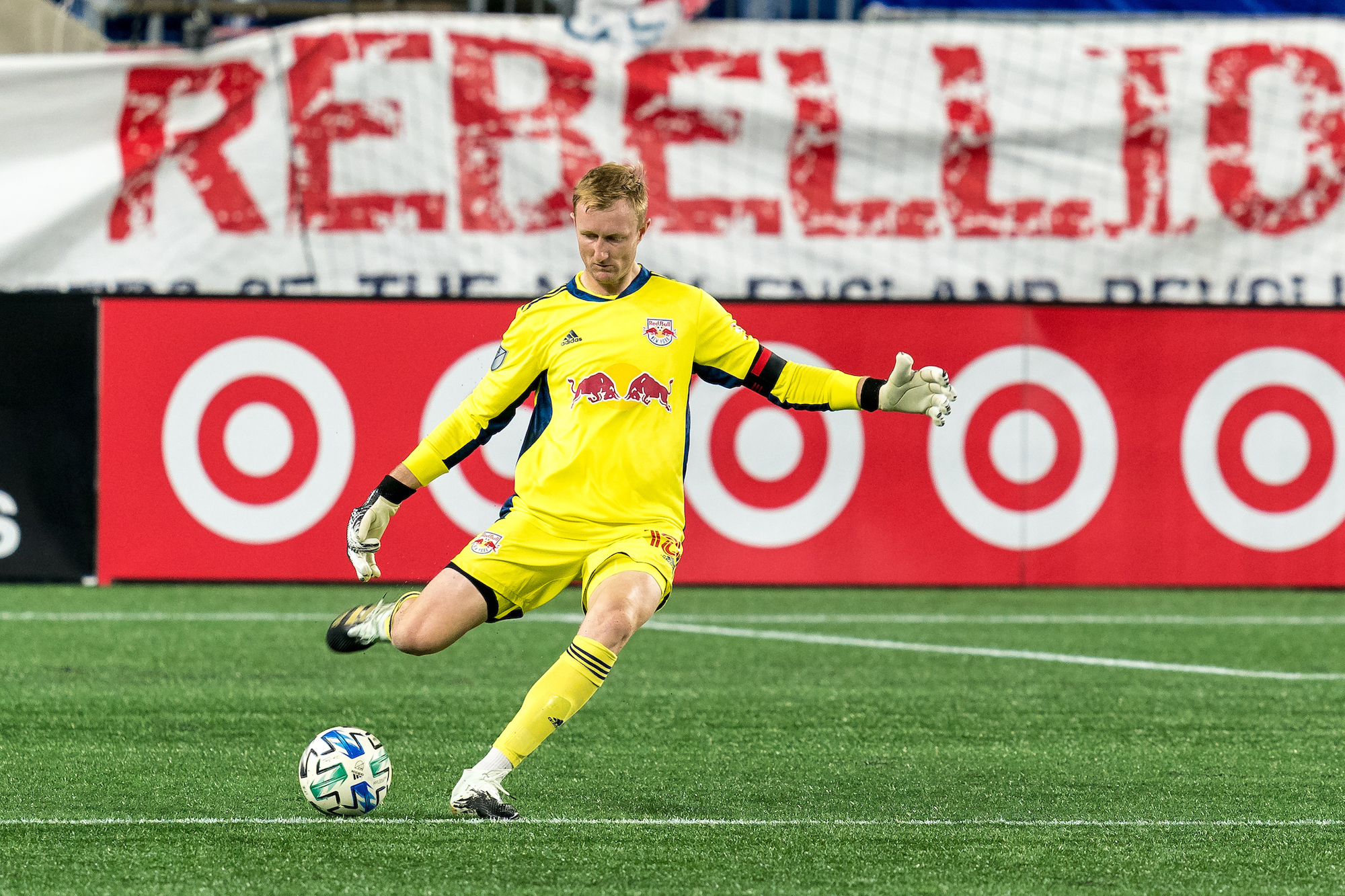 "My dad has 40 years in the Fire Department in the Bronx. He loves his job, but he would also kill to have my job," he added. "So how can I complain? He's lived through 911 and different bad fires over the years with guys who died on the job. How can I complain? I get to kick the ball for a living. I think that always puts things in perspective for me and maybe it's part of the reason I have the outlook I do."

Meara, for the most part, has been the Red Bulls' designated goalkeeper for Lamar Hunt U.S. Open Cup matches. He has a 9-6 record going into June 22's Hudson River Derby with New York City FC.

"We always look at it as a huge opportunity to win a Cup first and foremost," Meara said. "Of course, when you come up against our rival New York City, there's always a little more feeling. There's a little more on the line because not only do you want to win and advance but it would hurt even more to get knocked out and for the team you hate the most to win and advance."

"You just know it’s always going to be a battle,” Meara continued. “It's no secret that [we] don't really like each other. That always carries over onto the field. I expect this game to be no different. We hope we have a packed house so our fans can cheer us on and push us over the finish line."

While there might be animosity between the teams, Meara has respect for the Eastern Conference leaders. 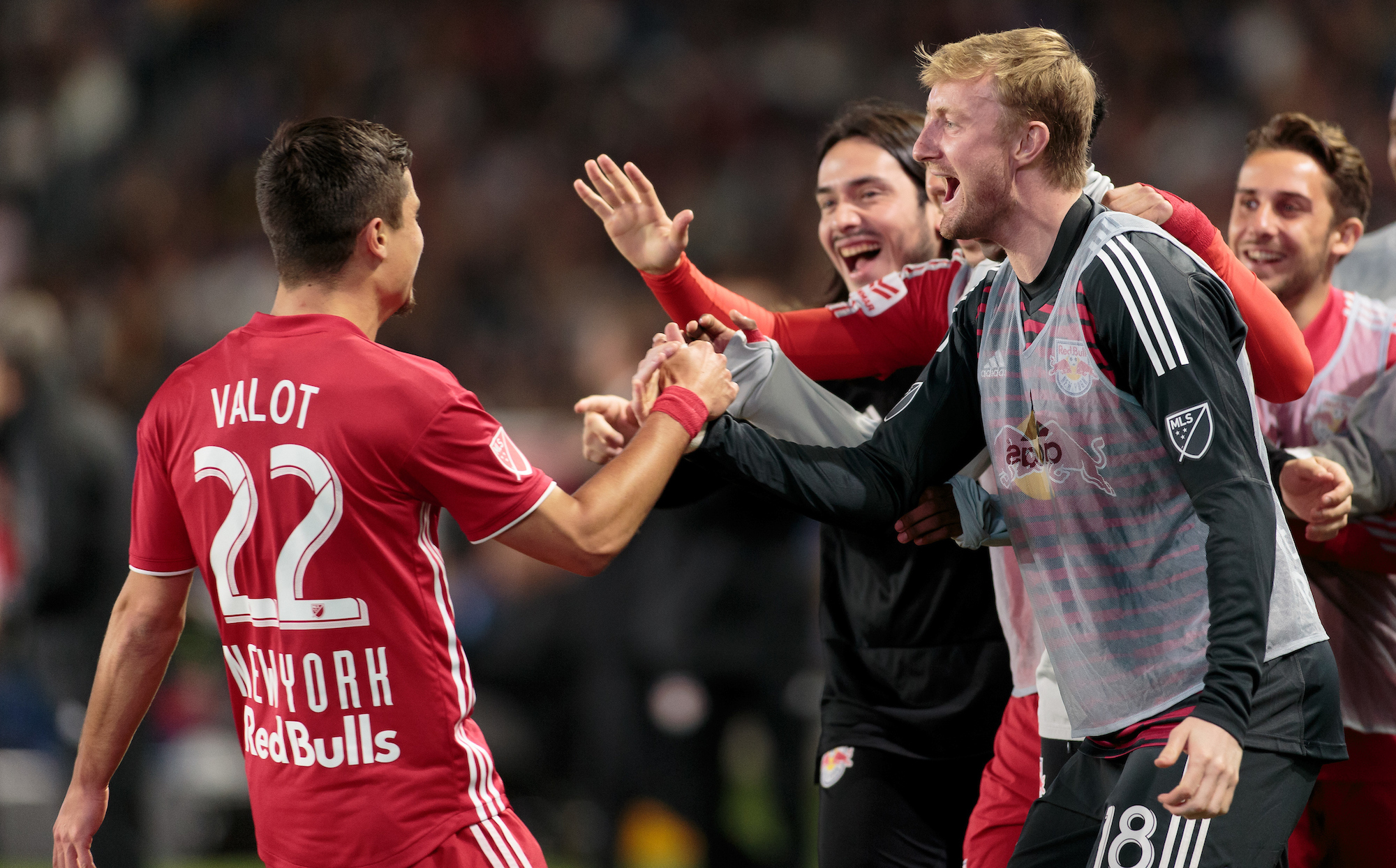 "Listen, they're a good team. They're flying in the league," he said. "They have something like seven clean sheets in a row. [Taty] Castellanos and some of their attacking guys are really dangerous. They're in a good run of form. We know it's going to be tough, but we're also confident that when we play our game and do what we're good at, we're a tough team to beat."

When you play in 15 Open Cup matches, you’re bound to have some lasting memories. Meara has two.

One was a personal achievement, the other was as a team during the Red Bulls' Cup run in 2017; when they lost at Sporting Kansas City, 2-1, in the final.

On the personal level, the Round of 16 shootout win over the Philadelphia Union (in that 2017 run) stood out as New York prevailed 5-3 after playing to a 1-1 draw. Meara made seven saves.

"I was busy all game," he said. "I really felt like I helped the team stay in the game."

Especially in the shootout, when he saved Fafa Picault’s shot on the Union’s third attempt. "That's always a memorable one just winning in a penalty shootout and against Philly," Meara said. "Of course, that always adds a little extra good feeling when you beat them."

In the August 15 Semifinals, the Red Bulls rallied from a two-goal deficit with 15 minutes remaining in regulation at FC Cincinnati, then a USL Championship team, behind Gonzalo Veron and Bradley Wright-Phillips before the latter connected for the game-winner in the 101st minute. 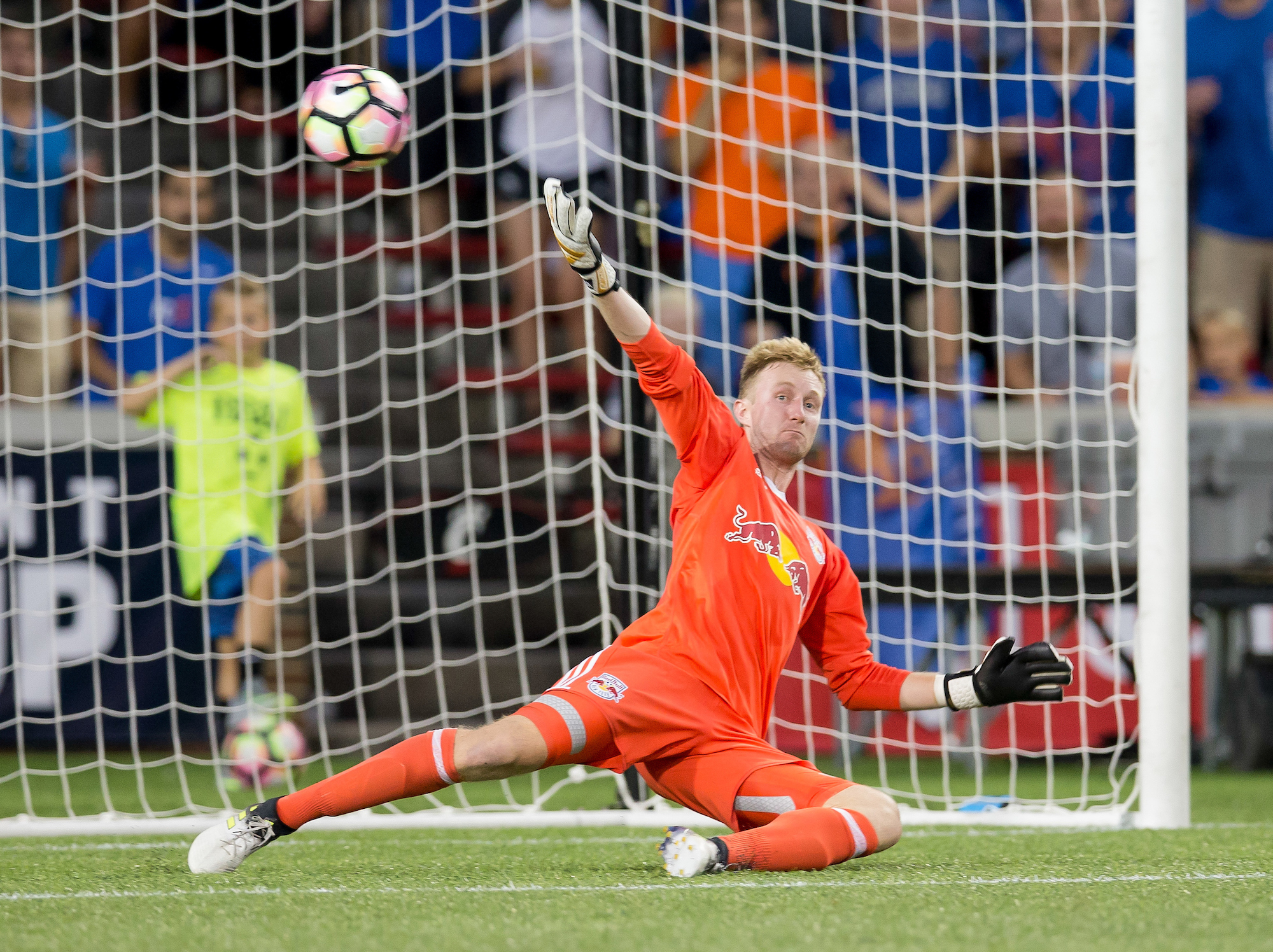 "It was an unbelievable atmosphere, probably even better than Kansas City in the Final," Meara said. "They played at the University of Cincinnati football stadium there and it was packed. It was one of the loudest games I've ever been a part of. We just stuck together and came back.

.@NewYorkRedBulls had to work for it in the Semis against @fccincinnati & their crazy crowd to reach the 🏆 Final. @ussoccer was there. 🎥📺 👇 pic.twitter.com/muBFKBPFCJ

“It was a special night,” Meara added.

He recorded four clean sheets during that 2017 competition.

Meara doesn't know whether he will start against NYCFC. In the 3-1 win over Charlotte FC in Round of 16 on May 25, Coronel was in the Starting XI. Meara had replaced an ailing Coronel in a 2-0 loss at Inter Miami CF on May 22, so perhaps head coach Gerard Struber wanted to give his No. 1 keeper some playing time.

Regardless of what transpires, Meara’s goal is to win the Cup.

Our first match against Charlotte FC was one to remember 🤭 pic.twitter.com/5pLoBunMa3

"Just being that close, having a taste of what it's like to be in a Final, it fuels our fire a little bit,” added Meara, a man who knows about waiting for those worthwhile moments. “We try to pass that along to the young and new guys. We want to win a trophy. That's what we play for. We hope this will be the year."