Second-division strivers Sacramento Republic travel to Carson, California with “nothing to lose” according to club GM and President Todd Dunivant – a man who won the Open Cup with Quarterfinal opponents LA Galaxy back in 2005.
Jonah FontelaJune 13 2022
Open Cup

Todd Dunivant’s first words in an interview with usopencup.com lay his feelings right on the line.

“This is fun,” he said with a shrug and a smile – his team just one win away from a shock spot in the Semis. “We look forward to the Open Cup every year.

“It’s more about attitude and mentality,” added the Republic’s GM of nearly five years (and its President for a little more than one) drilling down about a tournament he won in 2005 when he was among Major League Soccer’s top defenders. “The clubs that care about it and want to add to the trophy case year after year, they push.” 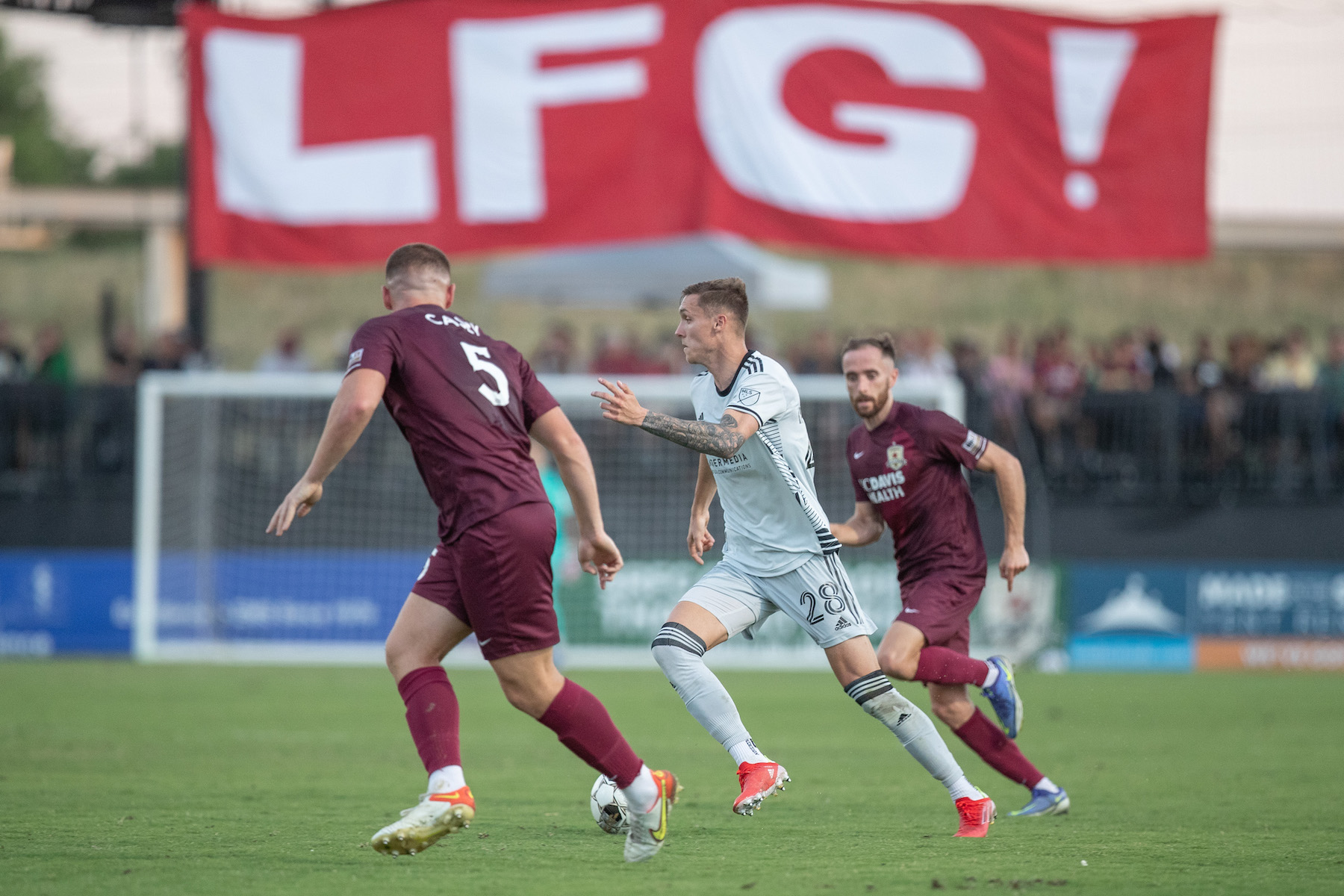 The second-division pro side out of California’s oft-overlooked – and occasionally maligned – capital city have been doing just that in the 2022 edition. They’ve scored 12 goals and conceded just once in four emphatic wins, including a 2-0 Round of 16 upset of MLS’ San Jose Earthquakes.

Now the road to the Semifinals leads straight through the very stadium where Dunivant spent the majority of his sparkling MLS playing career – and where he also became an Open Cup legend.

“I’m so excited for our players to have the opportunity to showcase themselves on that stage, in that stadium. And in a Quarterfinal,” said the 41-year-old who lifted American soccer’s oldest trophy in Carson, California 17 years ago at what was then a brand-new Home Depot Center (it’s now Dignity Health Sports Park). “We’re heavy underdogs. But we enjoy that role. We’ve got nothing to lose.”

“That 2005 [Open Cup] run was magical,” remembered the five-time MLS Cup winner. “It kicked off our MLS Cup run (they won a rare league and Cup double that year). It got us into a mode of knowing how to win in do-or-die situations. We kept teams from scoring and we had quality in Landon [Donovan], Herc [Gomez] and Cobi [Jones] to be able to hurt teams. We could win games 1-0, 2-0 and that’s a pretty good recipe in knockout competition.” 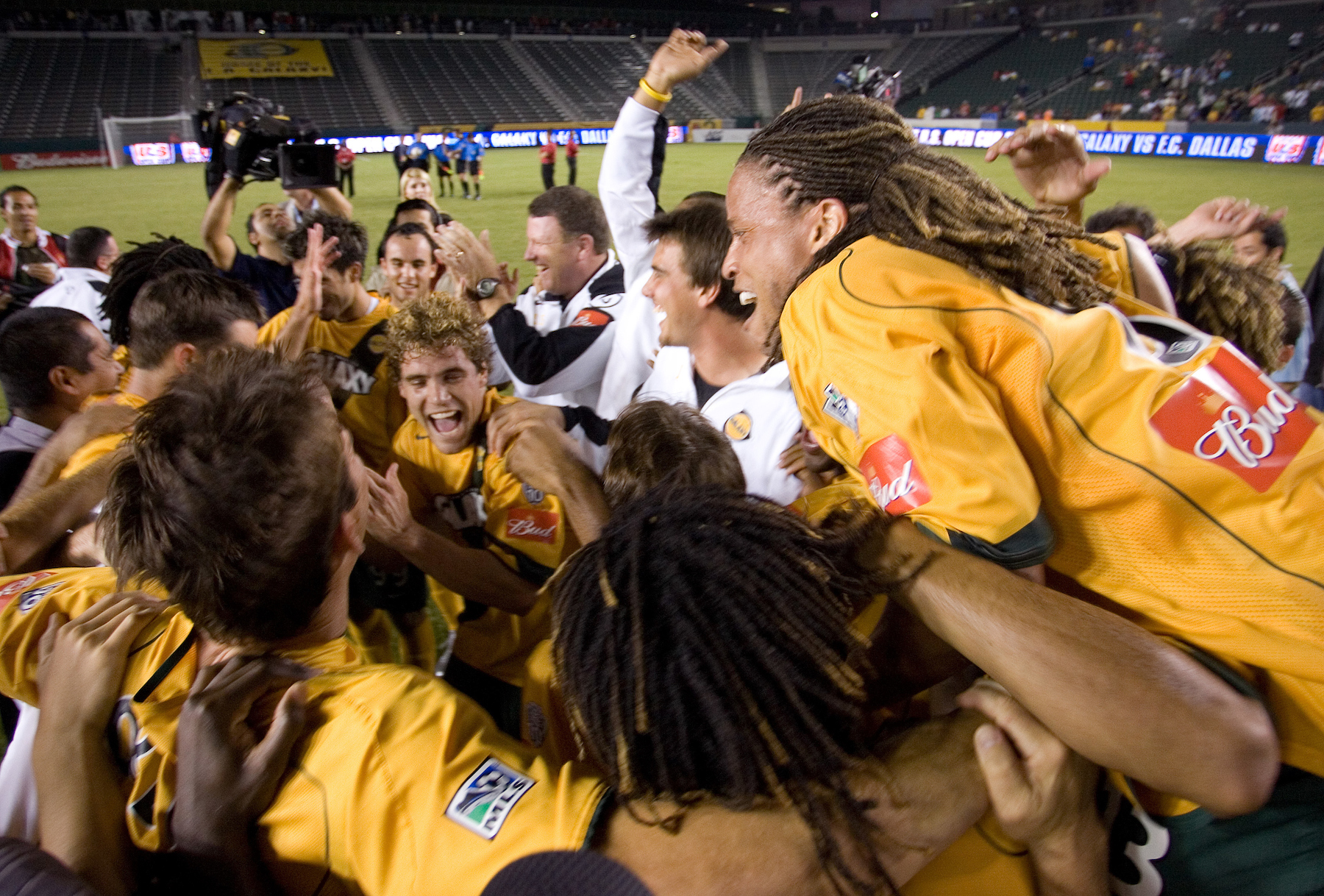 Dunivant began his post-playing career as a front office executive with the now defunct San Francisco Deltas of the NASL. It was a post that “catapulted” him toward the Sacramento job.

“I’m very happy my marriage stayed together through those two years [in San Francisco],” he said, outlining “the impossible task” of helping to start a club from scratch the year after retiring as a player at the age of 36. He was the Deltas’ fifth hire and he wore his share of hats at a club that won the 2017 NASL championship just 12 days before the league folded: “putting together the soccer operation, hiring coaches, recruiting players – I was also in charge of merchandising…and sponsorship.” 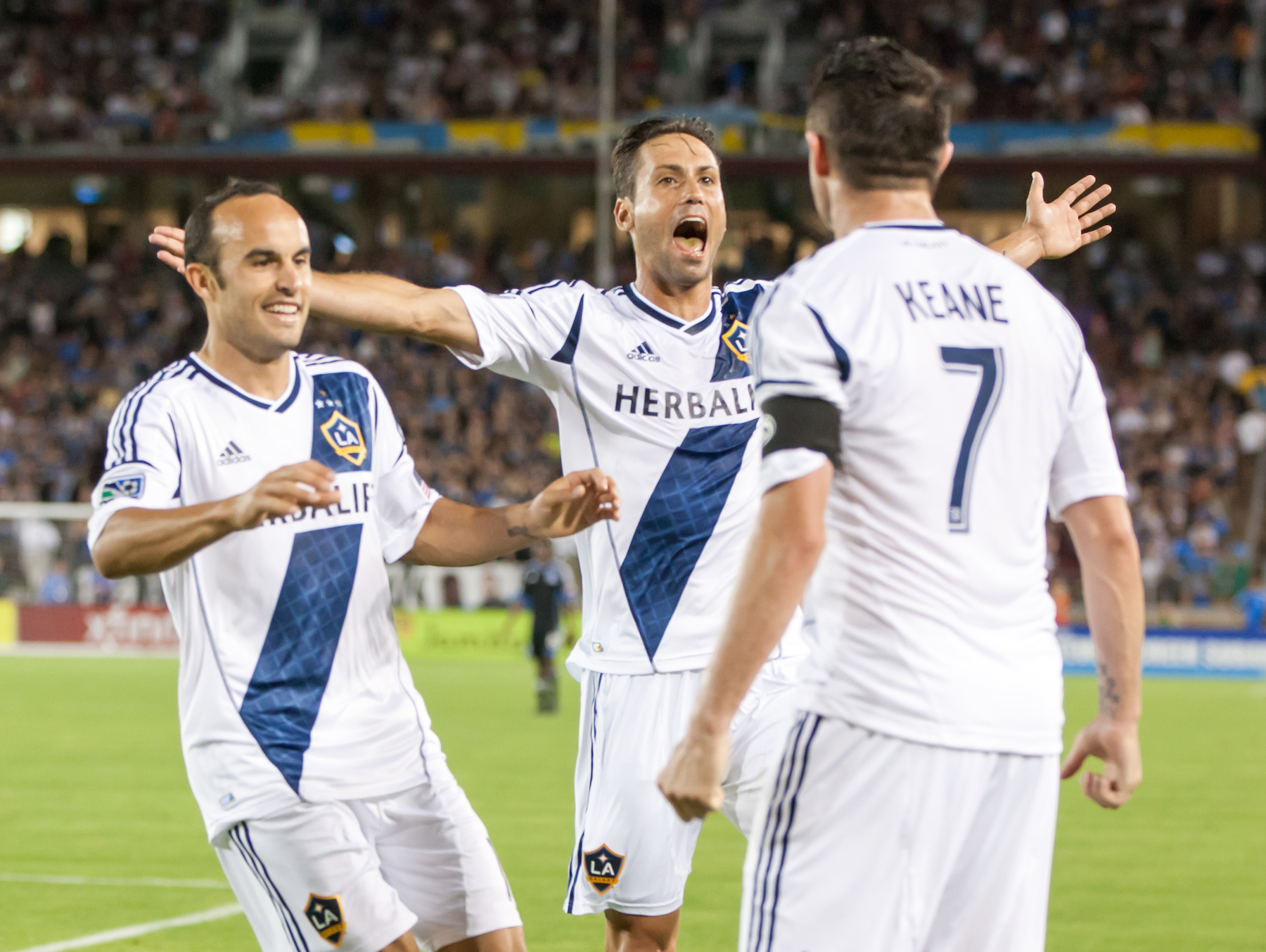 He also knows the fickle nature of the Open Cup better than most. It wasn’t just trophy lifts during his MLS days. “[With the Galaxy] we lost three years in a row in North Carolina,” he said of the infamous trio of Cup losses to second-tier outfit the Carolina RailHawks (now North Carolina FC) between 2012 and 2014.“That’s a case in point, right?” 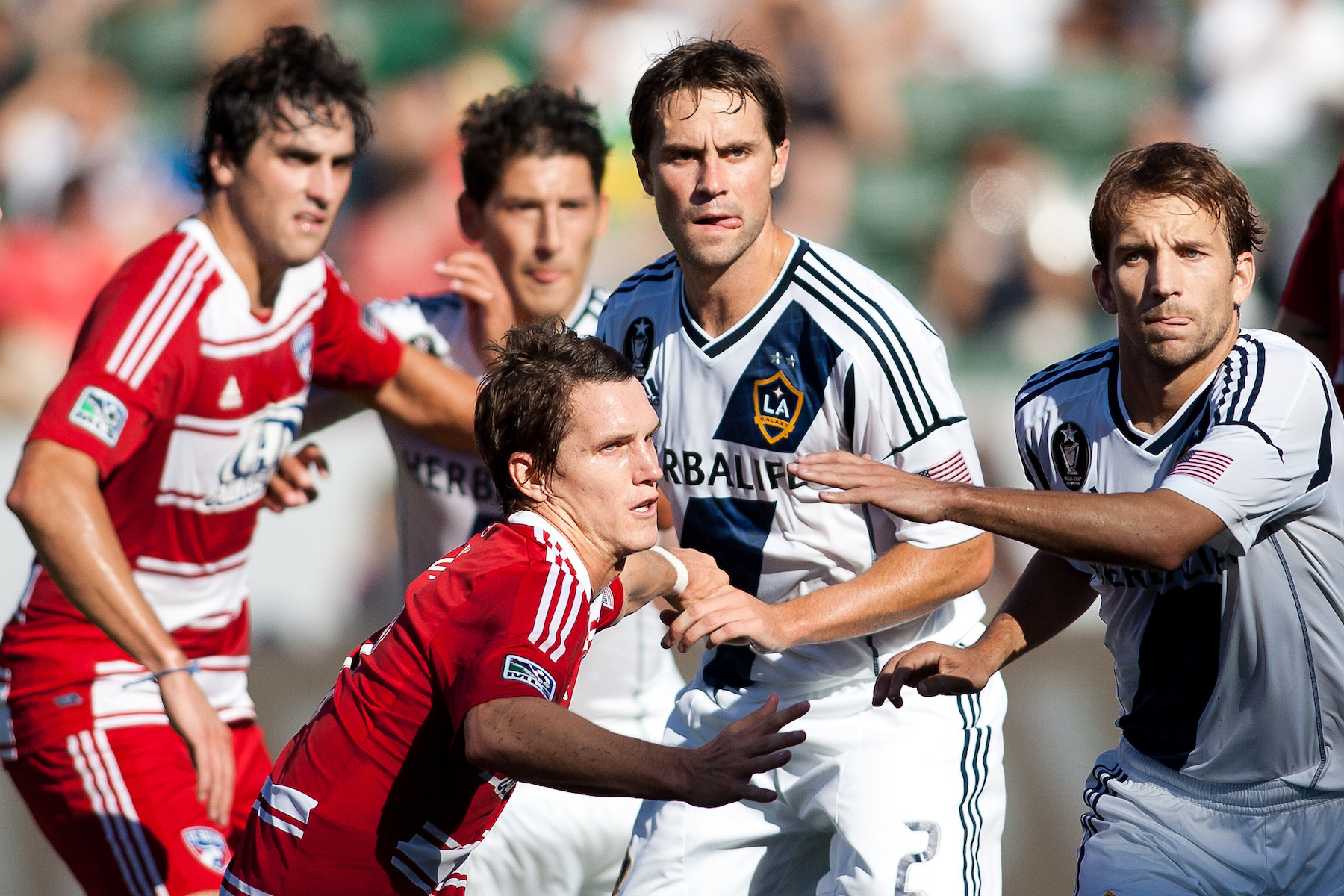 So does Dunivant think his SacRep have what it takes to play the role of David to LA Galaxy’s Goliath in this year’s Cup? He’s certainly set things up to give his men a puncher’s chance.

“Our guys have thrived in this environment up against top competition,” said Dunivant, who began preparing for this year’s Open Cup last September, “sprinkling in” strategic byes in league play in order to give his players a break during busy weeks. “We’re expecting a very, very strong team from the Galaxy. We’re expecting their best. And that makes it a great opportunity for us.”

No Easy Games in the Cup

“All of these teams are tough,” added Dunivant ahead of what will be SacRep’s first Open Cup Quarterfinal. “Just ask all the teams that have been knocked out.”

One of those teams now on the outside looking in are the San Jose Earthquakes, who the Republic beat in one of the last round’s biggest upsets. The Quakes also just happen to be another club where Dunivant spent time as a player  He won the first of his five MLS Cups there in 2003 at the tender age of 22.

Way to go, @Lopez_Roro 🤩@SacRepublicFC's first-ever signing is back & hoping to guide the club to a first Cup Quarterfinal 📚» https://t.co/vppxVCTJ1J #USOC2022 pic.twitter.com/5eRh3bNCXa

A group of the Quakes’ traveling supporters arrived at SacRep’s Heart Health Park and unfurled a banner. It read: Welcome to MLS. Oh…Nevermind. It’s a not-so-subtle reference to the capital club’s foiled bid to join the top flight – something that had seemed a foregone conclusion since their early days a decade ago.

After the final whistle, that banner lay in tatters along with the Quakes’ hopes of reaching the Quarters. The MLS men were outplayed from the start and club hero and captain Rodrigo ‘RoRo’ Lopez sealed the win with what Dunivant called an “absolute rocket” from distance.

“It’s out of our control at this point, but we’re not stuck in neutral,” Dunivant added, outlining plans for a downtown stadium and a desire to increase the club’s profile by “winning games” in league and Cup play. “You saw the excitement in the Cup [against the Earthquakes]. We sold out the stadium on short notice, and on a Wednesday night, and that tells you everything you need to know about Sacramento soccer.”

You do get the sense, reading between the lines, that this second-division side from Sacramento are playing with a chip on their shoulder. That they just might want to prove a point to those teams deemed worthy of MLS status.

“There’s no easy game in this tournament,” he said, a veiled warning to the LA Galaxy. “You have to show up and do the business on the day. And in our game against the Quakes, I wasn’t just proud of our team, I was proud of our city and how the fans showed up in such a big way. It was a night no one who was there will ever forget”

Dunivant is shrewd enough to know that a road test against an in-form and star-studded LA Galaxy will be another matter entirely. But his belief in his team, and the city’s unflagging support, are reason enough for hope.

“The Republic’s in the culture here,” added Dunivant, quick to point out how the club, no matter which division they’re in, are firmly entrenched in the heart and soul of Sacramento. “It’s a big deal compared with some places like Los Angeles or New York – your bigger MLS cities where teams can just blend in.

“What we have is unique,” Dunivant closed with a nod. “And a great opportunity.”