Members of third-division Union Omaha – who took down two MLS teams so far and hope for more of the same in Kansas City in an historic Quarterfinal – see no reason why they can’t go all the way.
Jonah FontelaJune 16 2022
Open Cup

“I expect to win every game,” Union Omaha coach Jay Mims told usopencup.com after a recent training session, high winds off the Nebraska plains making the phone line crackle and pop. “No matter if we’re supposed to or not.”

Just bluster, right? The Open Cup’s newest darlings blowing some hot air into a balloon that’s destiny can only be to burst? Maybe not. Mims, a four-year midfielder at St Louis University in his playing days – who self-describes as “a very competitive guy,” has led his third-division Union Omaha, only two years in existence, past a pair of Major League Soccer sides and into rare Quarterfinal air.

Among the Last Eight

“There’s eight teams left [from an original 103] and we’re one of them,” added the 44-year-old Mims, whose young Owls, more than half of them just out of college and in their rookie year, left both Chicago Fire and Minnesota United’s home fans scratching their heads in previous rounds. “It’s a special moment. A couple games away from, you know, winning a trophy…”

A trophy? Could it be?

We all love the Open Cup because, well, it’s open. To all. It provides us, each year, with underdogs who kick away at the walls separating amatuer from professional and lower-league from top-flight – those deemed worthy and the nameless rest. But don’t we all know, deep down, and with history as a guide, that the impudence of the Cup’s minnows, the comeuppances we delight in, can only go so far? 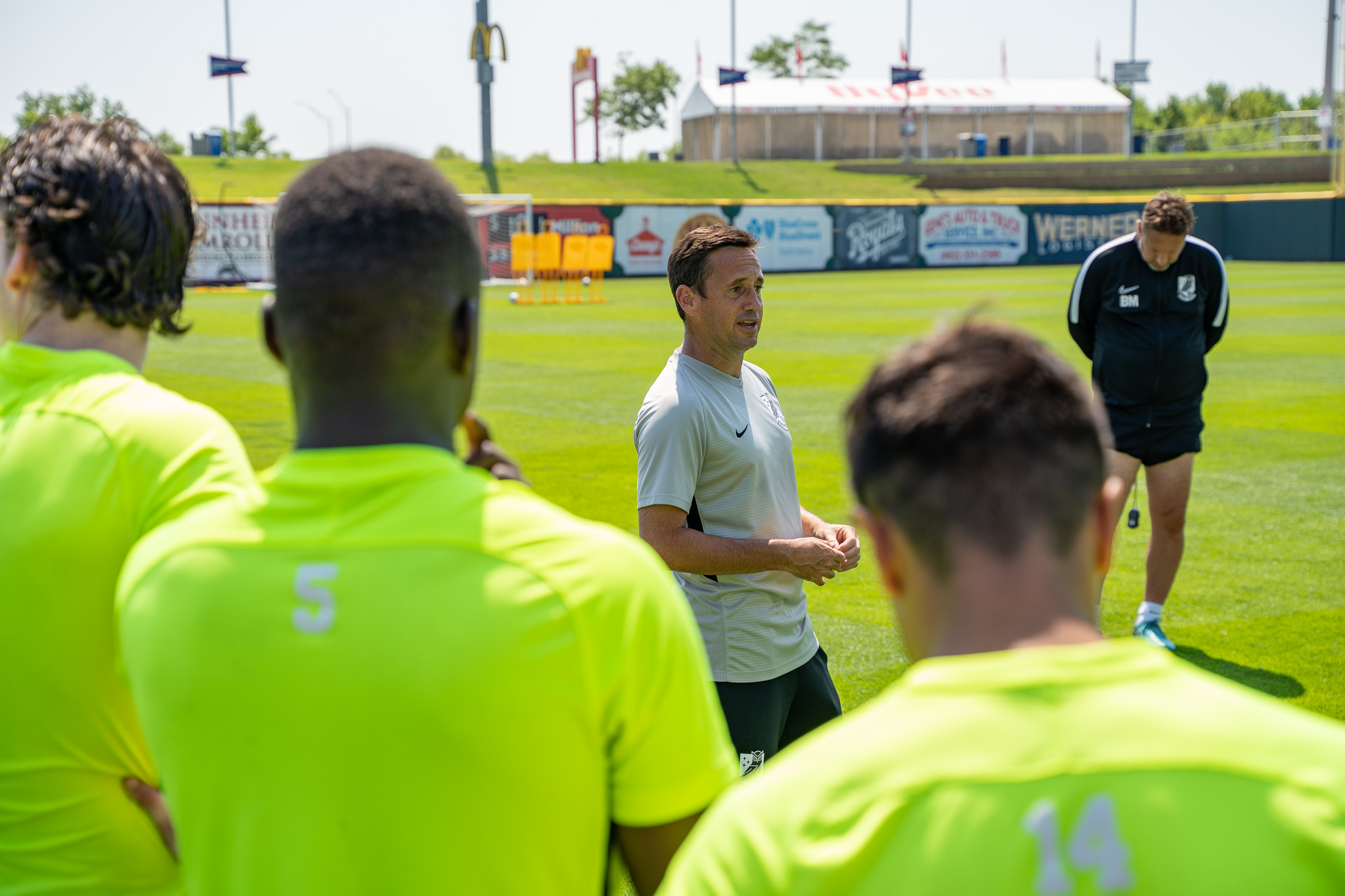 No team outside MLS’ vaunted heights – and guarded walls – can actually win the Open Cup. Right?

“My old coach in Seattle, Nate Daligcon, actually won it with the Rhinos,” said 24-year-old Union Omaha striker and Washington native Noe Meza, referring back to the 1999 Open Cup-winning side from Rochester, NY – who beat four Major League Soccer sides to become the only non-MLS team, since the top-flight league’s founding in 1996, to lift American soccer’s oldest prize. “I was joking with him the other day that we’re going to take that title away and do what they did this year.”

Those storied Rhinos of 1999 aren’t alone in their improbable run. In 2008, the Charleston Battery of the United Soccer Leagues reached the Final. Just because it’s unlikely doesn’t mean it’s impossible – even for a team with a dream from the third-division of American soccer’s pyramid.

🗣 Coach Mims talks about the team's fight after another historic comeback win in the @opencup! pic.twitter.com/FqmUhCEysA

“We can start to taste it at this point,” said Joe Brito, 23, of Bolton, Connecticut – fresh out of four playing years at UNC Charlotte. He scored his first professional goal to seal a 2-1 come-from-behind win against 2019 Open Cup runners-up Minnesota United in the Round of 16. “We’re a couple of games away from creating history and we can imagine what that history would look like. I think we can do it.”

Third division @Union_Omaha eliminate another MLS side to reach the U.S. Open Cup quarterfinals thanks to this volley ☄️

Brito “couldn’t get to sleep” that night for all the adrenaline caused by his sublime volley that sent the Nebraskans to the Quarters – and made them the first-ever side from USL’s League One to reach so far. Meza, also in his first year as a pro and also undrafted out of college, has begun to believe in unlikelihoods: “We’ve made it this far for a reason and so why not think we can go all the way?”

Coach Mims: Man with a Plan

Mims’ fingerprints are all over this team. The hunger. The belief. The never-ending preparations. “He’s always watching game video,” chuckled Brito about the boss who preaches fitness and recognizes that, when his team is prepared and ready to play, they’re a nightmare for anyone on any day.

It’s all contagious. As is the coach’s love of the Open Cup. Union players celebrate after the final whistle in St Paul

“It’s fantastic,” he said of the 109-year-old competition, currently in its 107th edition. “And I think we’ve helped grow the tournament this year and I hope it keeps growing and gets more notoriety and traction.”

This isn’t the coach’s first go-around in the Cup. In 2008, while assistant coach at local collegiate powers Creighton, he founded a Sunday league team and called it 402 FC (after the area code of Eastern Nebraska). “We had a lot of good players who, after graduating from Creighton, stayed in Omaha because it’s such a great city,” he said. “We outgrew the local leagues and so we took a shot at the Open Cup.”

402 FC, with Mims as player-coach, reached the First Round of the Open Cup proper in 2009. “I’m sure Conor was out there with us a few times,” said Mims, recalling his current captain, Conor Doyle, kicking around in the off-season during his one semester at Creighton. 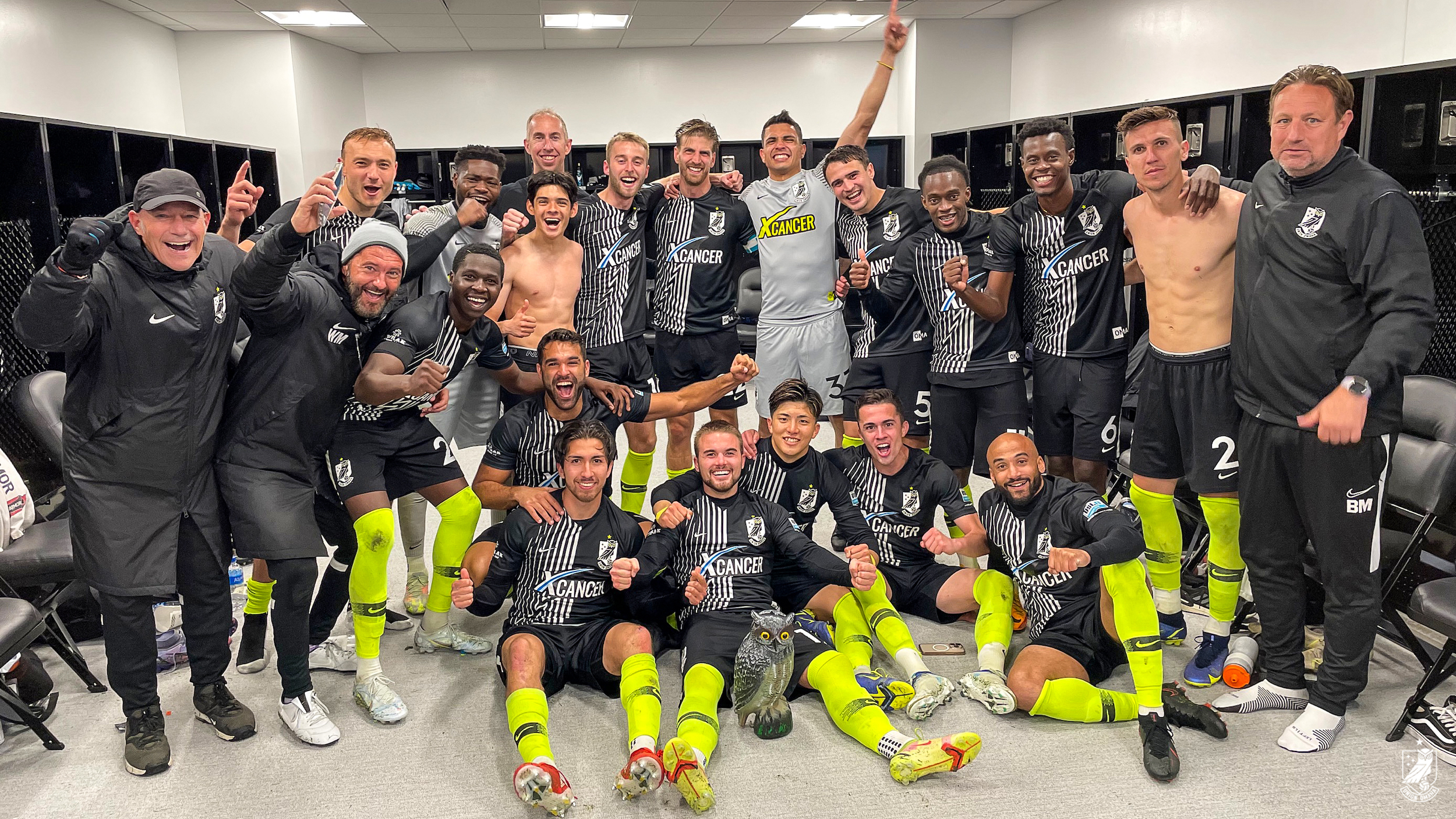 A happy locker room for the USL League One strivers

Doyle went off to England and even won an Open Cup with D.C. United (in 2013) before the two reunited in Omaha for this inspiring 2022 run. “He [Mims] is really the reason I’m here,” said the 30-year-old Doyle, a journeyman and consummate pro. Mims, in turn, holds his skipper in the highest regard: “He [Doyle] is the ultimate pro and can play for my team any day.”

Who’d have thought that the Owls of Union Omaha would still be flying – and hunting – after four Cup games? Who’d have thought they’d walk out of Chicago Fire’s Soldier Field and Minnesota United’s brand new Allianz Field with wins? No one. At least no one outside the orbit of the ambitious Coach Mims and his firm belief in all the possibilities.

“You can feel it online and everywhere really,” laughed Meza, who’s scored twice so far in this 2022 run, talking about the support that’s snowballing for him and his Union men from all corners of the country. “Some of the comments on twitter from the fans of the teams we beat, they’re just ruthless.

“In Minnesota, after we won,” Meza added, shaking his head with a smile, “One of their fans just yelled out ‘Can we have your coach, please?!”

Many of Mims’ younger players are spurred on by being overlooked and having to take the backdoor toward their dreams of playing in the top tier. “That [MLS] is where these players want to be playing – starting for that team and playing in that stadium,” said the coach, who, aside from a decade at Creighton, was also the academy director at MLS club Real Salt Lake for a year. “And I want to coach at that level too. It’s no secret.” 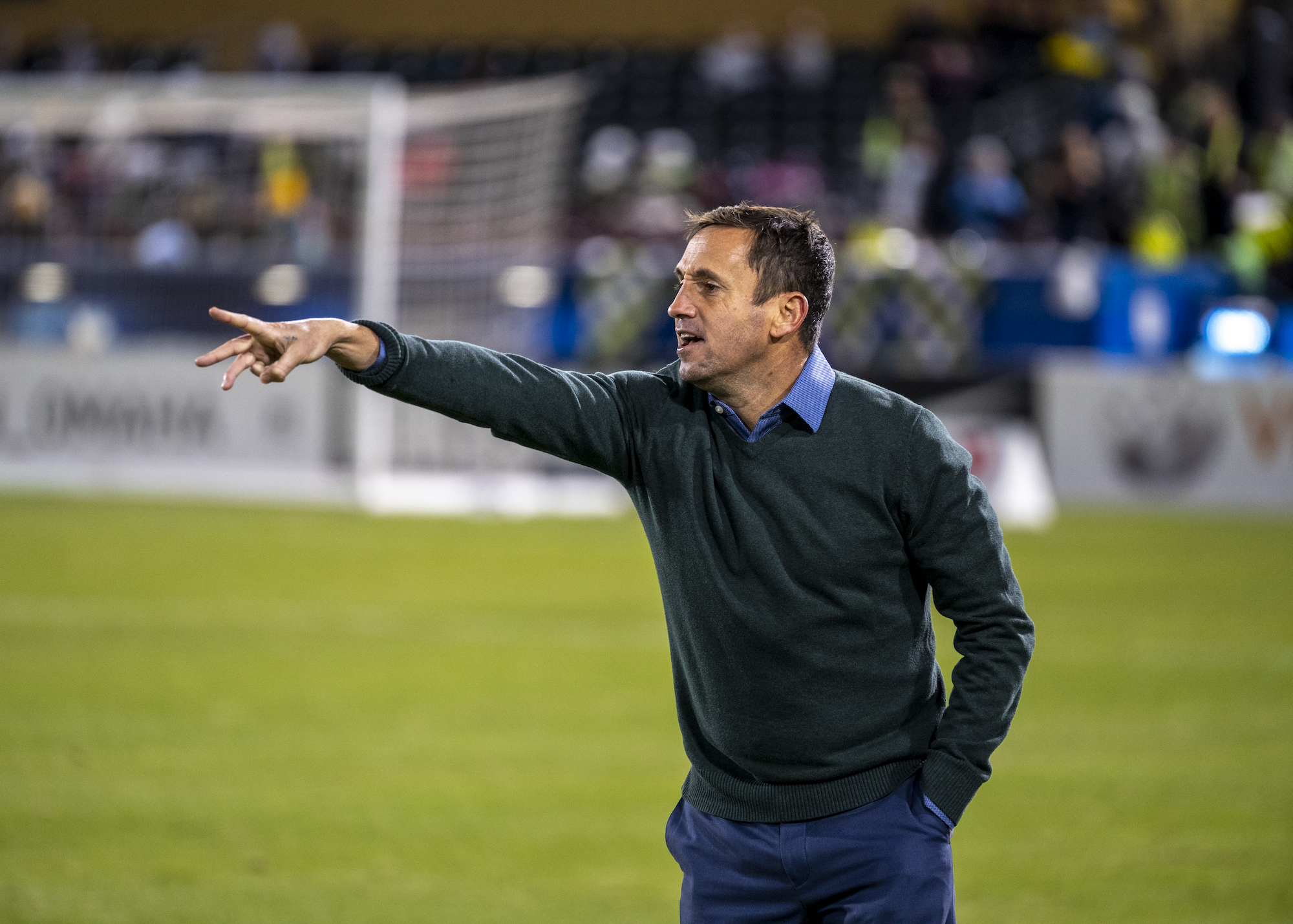 But for now it’s a matter of continuing to show the so-called big boys what they’re made of. Of being unruly houseguests and party spoilers. Ahead of the Quarterfinal with four-time champions Sporting Kansas City, and once again on the road, Union Omaha are without doubt the darlings of the Open Cup. They’re this year’s dreamweavers.

“You see all these fans from different teams supporting us on social media and everywhere – even fans of other MLS teams,” said a disbelieving Brito. “It’s really cool to have, like, the whole country behind us at this point.”

Sporting KC hosted and won the 2017 Open Cup Final at their Children's Mercy Park and are looking to spark their season to life as they sit near the bottom of the MLS standings. Union Omaha won’t be taking Peter Vermes’ side by surprise. And Mims and his men know it.

“But it’s a game, right?” the coach asked rhetorically. “We’re going to do what we do. Watch our tape. Do our scouting. We’ll have a plan. We’re going to get their best team and their best shot when they’re this close to a trophy.”

But a team with a dream, playing without fear, is a beautiful thing. It provides its own energy. 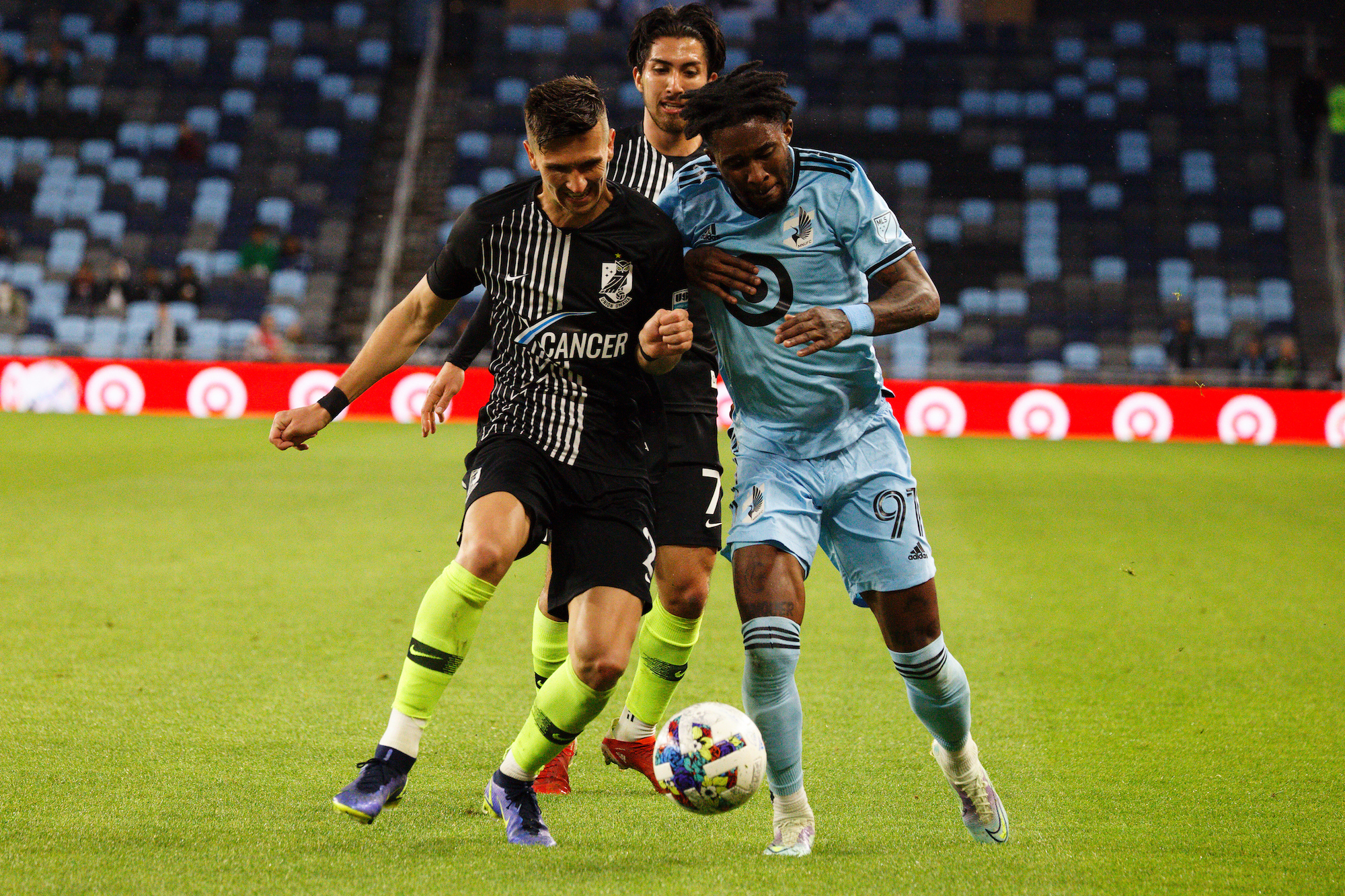 “There’s no reason playing if you don’t think you can win,” said Brito. Meza, clearly learning lessons from his coach, agreed with a nod: “The pressure’s on them [SKC] and they’re the favorites…All we have to do is go out and play our game.”

Sporting Kansas City have the squad depth, the home field, the stadium, far higher salaries – and a history of winning in the Open Cup. They also have that MLS badge on their sleeve, the same one worn by 25 of the last 26 winners of this tournament.

But Union Omaha have something intangible – the support of everyone who’s not a dyed-in-the-wool Sporting KC fan (and probably the admiration and good will of them too).

So the question remains: Is it possible? Will the gods allow it? We’ll all have to wait and see. There’s 90 minutes (maybe 120, and maybe a shootout) between all the possibilities and a place in the Semifinals – and the verge of more history.