BHUBANESWAR, India (Oct. 11, 2022) – The U.S. Under-17 Youth Women’s National Team recorded its largest margin of victory in a FIFA U-17 Women’s World Cup as it opened the tournament with an 8-0 victory against host India. Seven different players scored for the USA, led by a brace from forward Melina Rebimbas while forwards Onyeka Gamero and Taylor Suarez, midfielders Charlotte Kohler and Mia Bhuta and defenders Ella Emri and Gisele Thompson also scored.

The USA will now take on Brazil on Friday, Oct. 14 at 7 a.m. ET (FS2) in the team’s second match of the group stage. Brazil beat Morocco 1-0 in its opening game of the tournament, meaning the USA sits atop Group A in the early going.

The U.S. got off to a flying start against an overmatched India side, pressing high against India’s defense while controlling the tempo immediately. It only took nine minutes for the young Americans to open the scoring as Rebimbas struck a great volley from about 10 yards out after a corner kick that was taken short. The 5-foot-3 Kohler doubled the lead just four minutes later, again off a corner, as she rose above her surrounding defenders and buried a header. Midfielder Riley Jackson assisted on both goals.

Forward Onyeka Gamero added her name to the score sheet in the 23rd minute as India attempted to play out of the back on a goal kick. Gamero stripped a defender and finished her one-on-one challenge against the goalkeeper with a crisp left-footed strike into the lower right corner.

In the 30th , Rebimbas added her second goal of the night with a brilliant left-footed strike from the top of the box. Thompson then capped off the first half with a 39th minute goal, her first at the international level, following a great individual effort to dribble out of pressure and finish with her left foot just inside the right post.

The USA continued its domination in the second half as yet another corner kick resulted in a goal, this time courtesy of Emri as she placed a header in the top right corner for her first international goal. Eight minutes later, the U.S. was awarded a penalty kick following a foul on Kohler in the box. Suarez stepped up and finished calmly for her first goal of the tournament.

The game featured several special moments for U.S. midfielder Mia Bhuta, who entered the match at halftime in place of Jackson and wore the captain’s armband. Bhuta, whose father was born in Mumbai and grew up in Gujarat before emigrating to the USA at the age of 16, is the first player of Indian descent to represent the USA in a World Cup, which she did so at the age of 16.

It got even better for Bhuta after entering the match. In the 62nd minute, the midfielder buried an incredible left-footed shot from distance in the top left corner. She also picked up the assist on Emri’s goal.

USA – Melina Rebimbas (Riley Jackson), 9th minute – Following a USA corner which was played short, Jackson received the ball on the right wing, turned her defender and dribbled past another to get out of pressure, and then sent the a cross into the box. Rebimbas finished with a right-footed volley from 10 yards out to open the scoring. USA 1, IND 0

USA – Charlotte Kohler (Riley Jackson), 15th minute – On another corner from the right, Jackson played a ball into the center of the box where Kohler rose above several defenders to finish with a header from four yards out. USA 2, IND 0

USA – Onyeka Gamero, 23rd minute – As India tried to play out of the back on a goal kick, Gamero pounced to pick the defender’s pocket at the edge of the box and beat the goalkeeper with a low shot from 12 yards out. USA 3, IND 0

USA – Melina Rebimbas, 30th minute – Jackson played a cross into the box from the right side which an India defender attempted to clear, but she accidentally played it right to Rebimbas just inside the top of the penalty box. She settled the ball and fired a powerful left-footed strike that sailed into the left side of the goal from about 16 yards out. USA 4, IND 0

USA – Gisele Thompson, 39th minute – Thompson received the ball just inside the box on the right side and cut inside, dribbling out of pressure with a feint before finishing with a left-footed shot that snuck inside the near post from 12 yards out. USA 5, IND 0

USA – Ella Emri (Mia Bhuta), 51st minute – Bhuta played a great ball into the box off a corner which the 5-foot-9 Emri met with a powerful header into the top right corner. USA 6, IND 0

USA – Taylor Suarez, 59th minute – The U.S. was awarded a penalty kick following a foul in the box on Charlotte Kohler. Suarez stepped up to the spot and converted. USA 7, IND 0

USA – Mia Bhuta (Charlotte Kohler), 62nd minute – Kohler received the ball from Gamero on the right side and played a pass to Bhuta about 25 yards out from goal in the center of the field. She took a touch and fired a curling left-footed shot to beat the ‘keeper into the top left corner of the goal to cap the scoring. USA 8, IND 0

Preview: USA Faces Morocco With Group A Title On The Line At FIFA U-17 Women’s World Cup

Preview: USA Faces Brazil For Next Test At FIFA U-17 Women’s World Cup 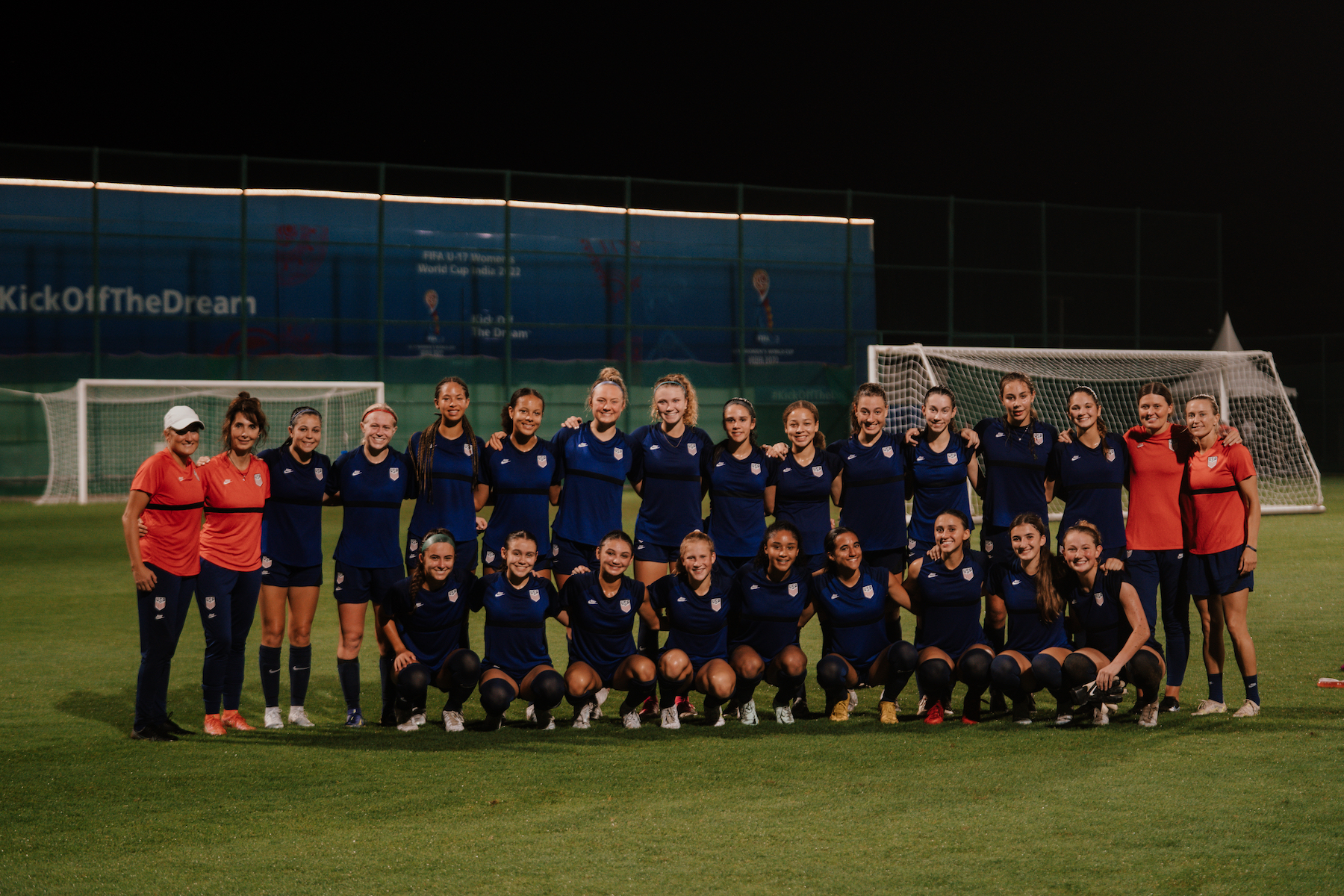 Preview: USA Faces Morocco With Group A Title On The Line At FIFA U-17 Women’s World Cup

Preview: USA Faces Brazil For Next Test At FIFA U-17 Women’s World Cup