Having swapped one Colombia (South America) for another (South Carolina), Luis Enrique Molina is aiming for Open Cup glory and a long-longed-for chance at a pro career.
Jonah FontelaDecember 12 2022
Open Cup

There are dreams worth keeping.

You can ask Luis Enrique Molina of amateur side SCU Heat, who are one win away from reaching the 2023 Open Cup Proper. The midfielder and captain, born in Colombia, has only ever wanted to be a professional player.

But at 24-years-old, and undrafted out of college, it’s a dream that’s dimming.

“People don’t expect players who are out of college to do anything in the professional [soccer] world,” said Molina, who considers his words carefully. “But we’re here because we believe. And if you don’t want to take advantage of the opportunity, or you’re not willing to work for it, you’re in the wrong place.” 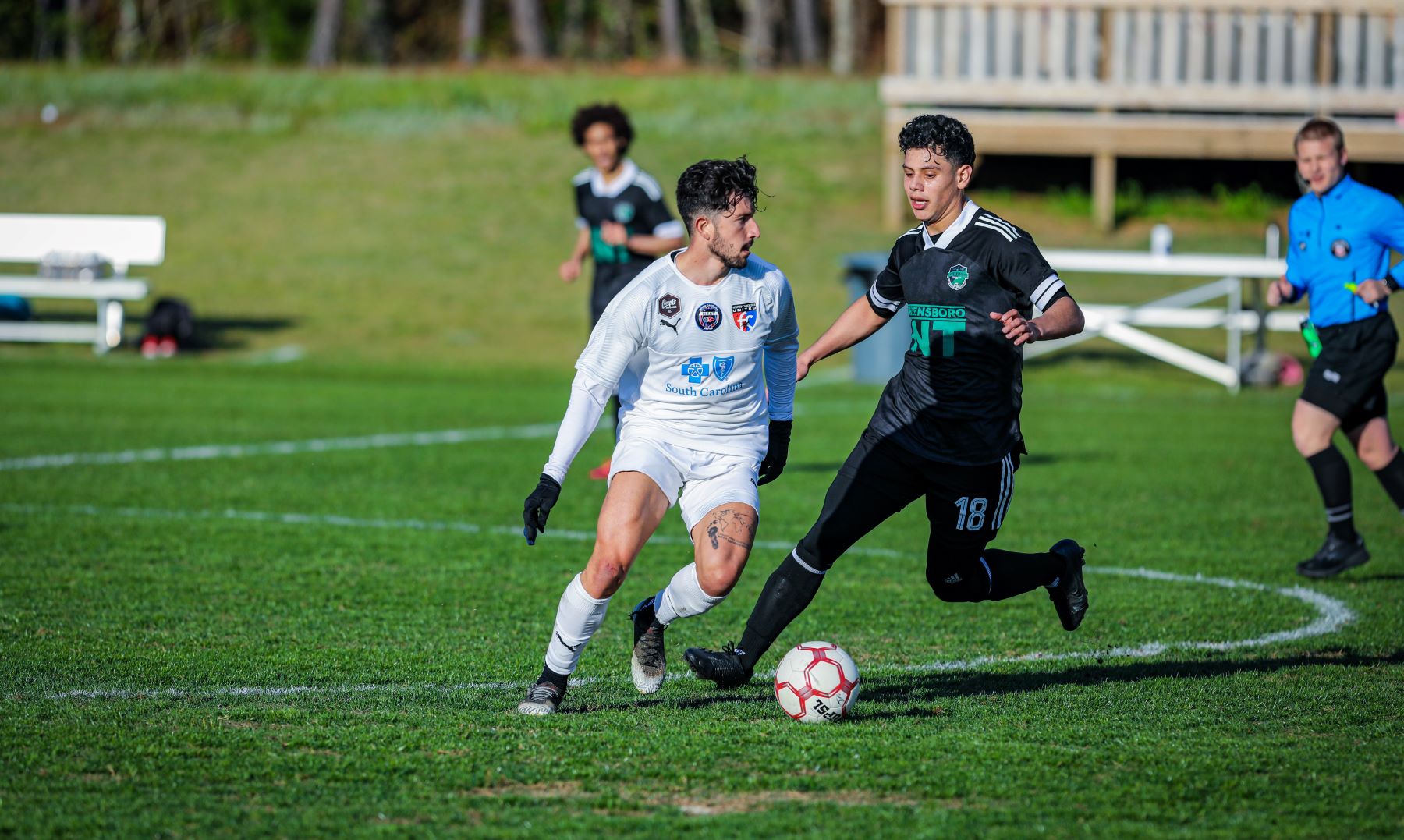 Molina (in white) in action for SCU Heat

Molina, known to all as Kike (pronounced Kee-Kay) was raised in the Caldas region of Colombia. In those early days, in the city of Manizales, he was desperate to forge a career in the sport he loved. “But if you’re not signed by a club [in Colombia] by the time you’re sixteen, it’s pretty much finished for you.”

Stubborn by nature, Molina wasn’t ready to be finished. He traveled to the United States, where he expected to be “signed by a pro club the moment I arrived.” When no club reps met him at the airport waving contracts, he joined up with relatives and attended high school in Greenville, South Carolina.

He excelled on the field and caught the eye of college scouts. Molina eventually attended Division-Two North Greenville University on a full-ride soccer scholarship.

“The people were so amazing there,” he said of his four years at the school. He perfected his English and came to appreciate how Americans, “really want to help if you come at them in a genuine way.”

Still he wasn’t satisfied with focusing on his studies – unsurprisingly with a major in Sports Management and Business. His childhood dream itched him like a rash. “The soccer side of college infuriated me,” he said of the school where the game seemed merely a pastime for most of his teammates. “I wanted to be an athlete first,” he said. “My ambitions were different from my teammates. It was always a part of me.”

Molina interned in the front office of USL League One side Greenville Triumph and played summer-league soccer in Florida with Knoxville Force and Wake FC. But after graduation, the end stared him in the face again – same as it had in Colombia when he was 16. Undaunted, he carried on and ended up, coincidentally, in another Colombia (well Columbia, South Carolina).

His current club, SCU Heat, undefeated in the United Premier Soccer League this year, is a place where the flame of dreams can be sustained for a little while longer. The embers are tended there.

Players, ranging in age from 17 to 28, receive room and board. They live together in three houses owned by the club. They’re expected to work days and play – keeping a high on-field standard – by night.

The club’s a stepping stone up to the pros, or a last chance before life’s demands swallow the dream.

“It’s up to me as captain to hold the younger guys accountable,” added Molina, who’s been a crucial part of a midfield that’s helped SCU Heat dominate the UPSL’s Mid-Atlantic Conference this year and climb through three rounds of 2023 Open Cup Qualifying.

And now, with a home test against high-flying Club de Lyon of Florida on December 17, they’re on the cusp of a place in the Open Cup Proper. And that’s a chance to play against the very pro sides that Molina and his teammates are hoping to reach.

The Dream Remains the Same

“They way I dreamed of playing in big stadiums back home in Colombia, this [SCU Heat] is a version of that for the kids who grow up here,” he said of the club, an incubator of overlooked talent.

“We have players from 13 different countries and it’s a real mix of cultures,” added Molina, whose smarts off the field match his ability on it. Aside from his captain duties, he’s also learning his way as the club’s GM and de-facto marketing manager. 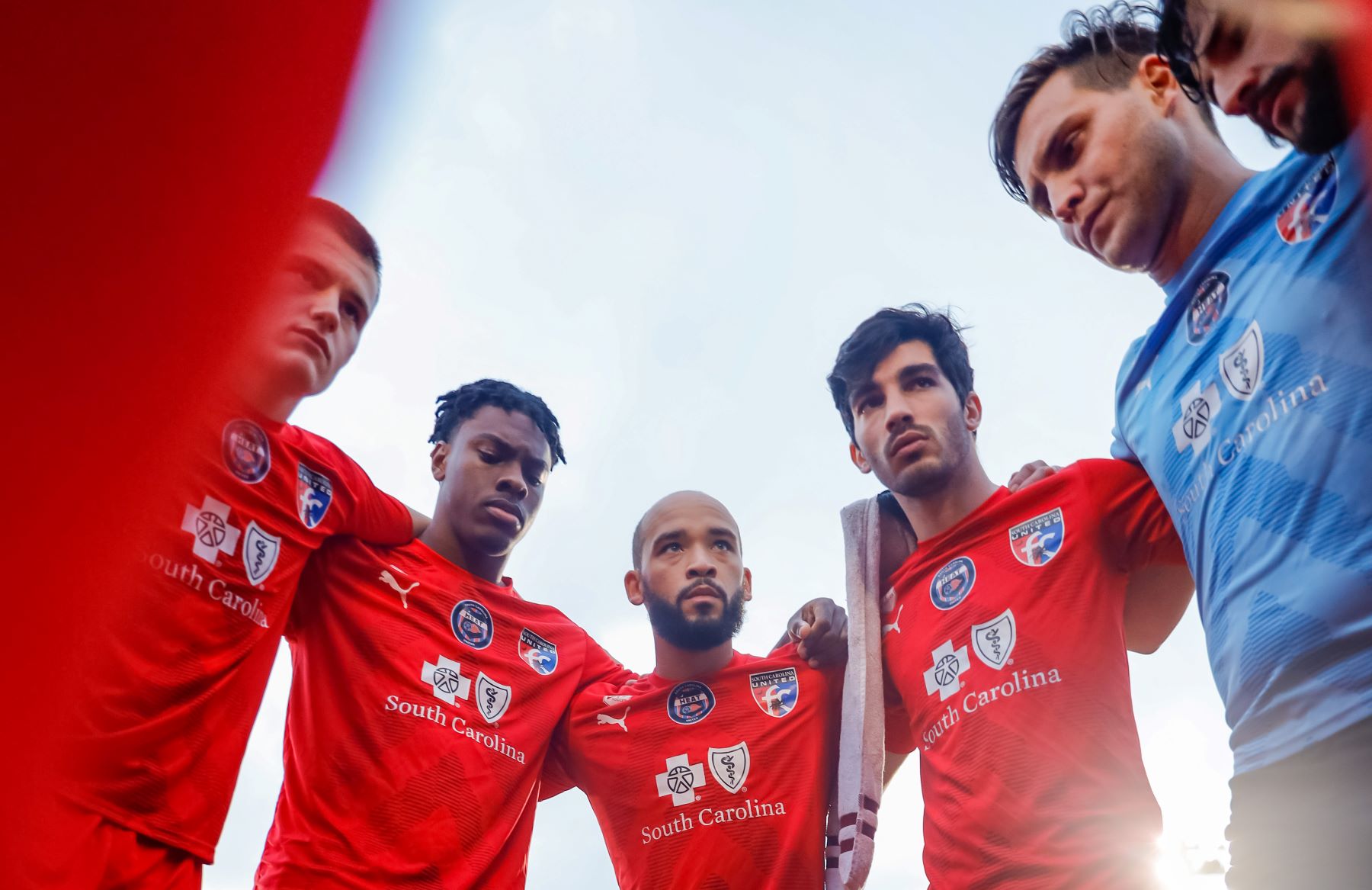 It’s a sign of his maturity that he doesn’t think first of what the Open Cup means for himself. But rather, for his coach, Asher Quave Robinson, and club founder and co-owner Nick Lewis.

“I have to take myself out of it,” Molina said of his bosses, who climb uphill everyday to provide a path, unlikely as it might be, for these players to reach a little farther. “They try so hard to make this club as professional as possible. They give the kids in this city something to believe in.

“He [Molina] is a leader and a great personality,” said coach Robinson, in his second year at the club. “He does the work of two men – the communicating and running and the gritty work too. Whenever anyone is tired, he raises the level.

“He [Molina] sets the standard of what we want our club to be about,” the coach added. 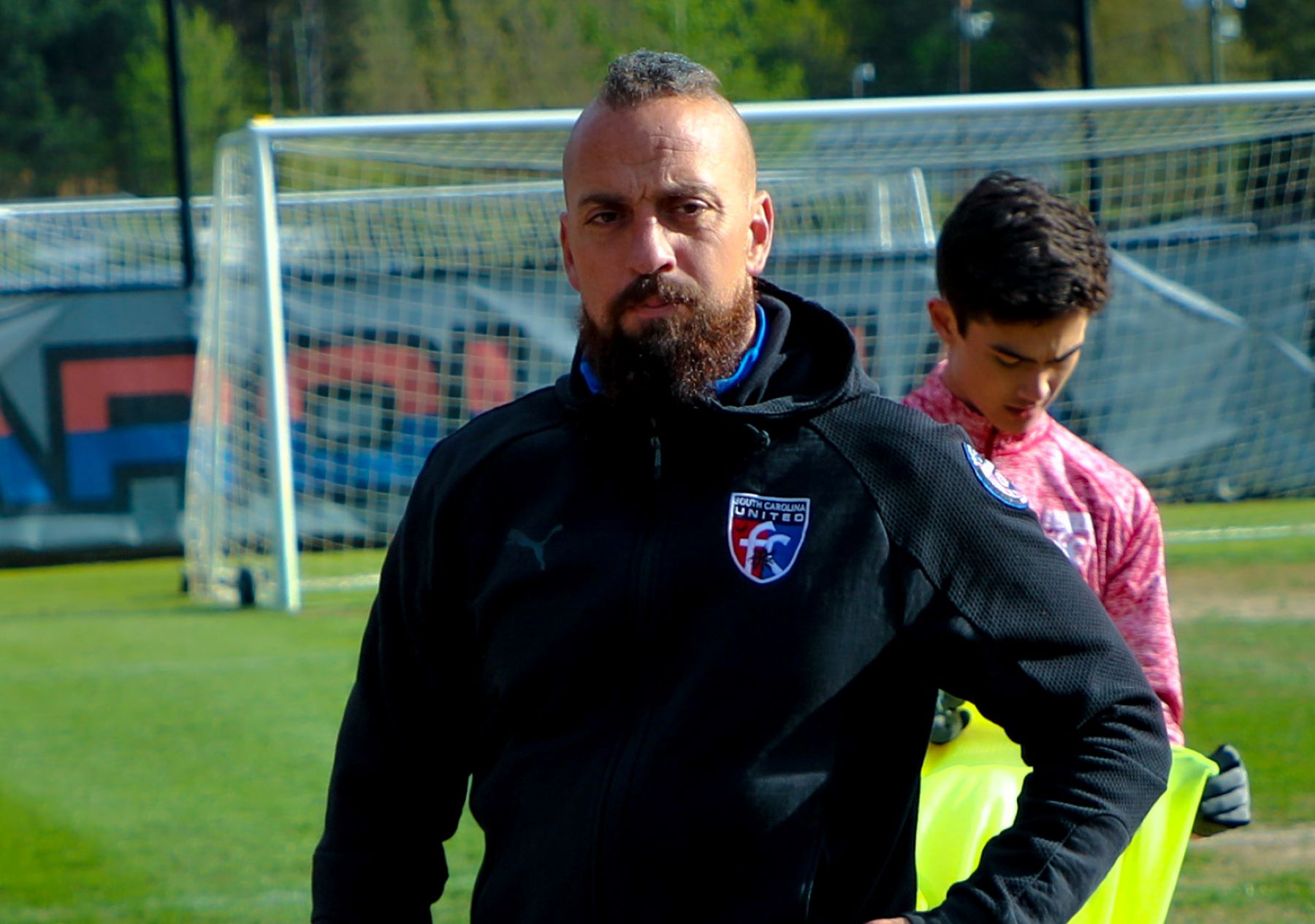 Graduates of SCU Heat have moved on to Rochester NY FC (formerly the Open Cup-winning Rochester Rhinos, who play in MLS Next). Others have gone abroad to play in the Faroe Islands and Denmark and in the USL Championship with Charleston Battery.

“Some of our players have been successful,” insists Molina.

‘Nothing But Opportunity Here’

“The end might come,” said the midfielder, always prepared and looking for opportunities on the field or off. “If you take soccer out of the picture I could probably send more money home to my family…”

There’s a but in there. It’s not spoken. It’s implied. He’s not a pro – not yet. But every day he’s working toward that dream, a star on the horizon. It’s a steadying and consistent signpost from his boyhood. 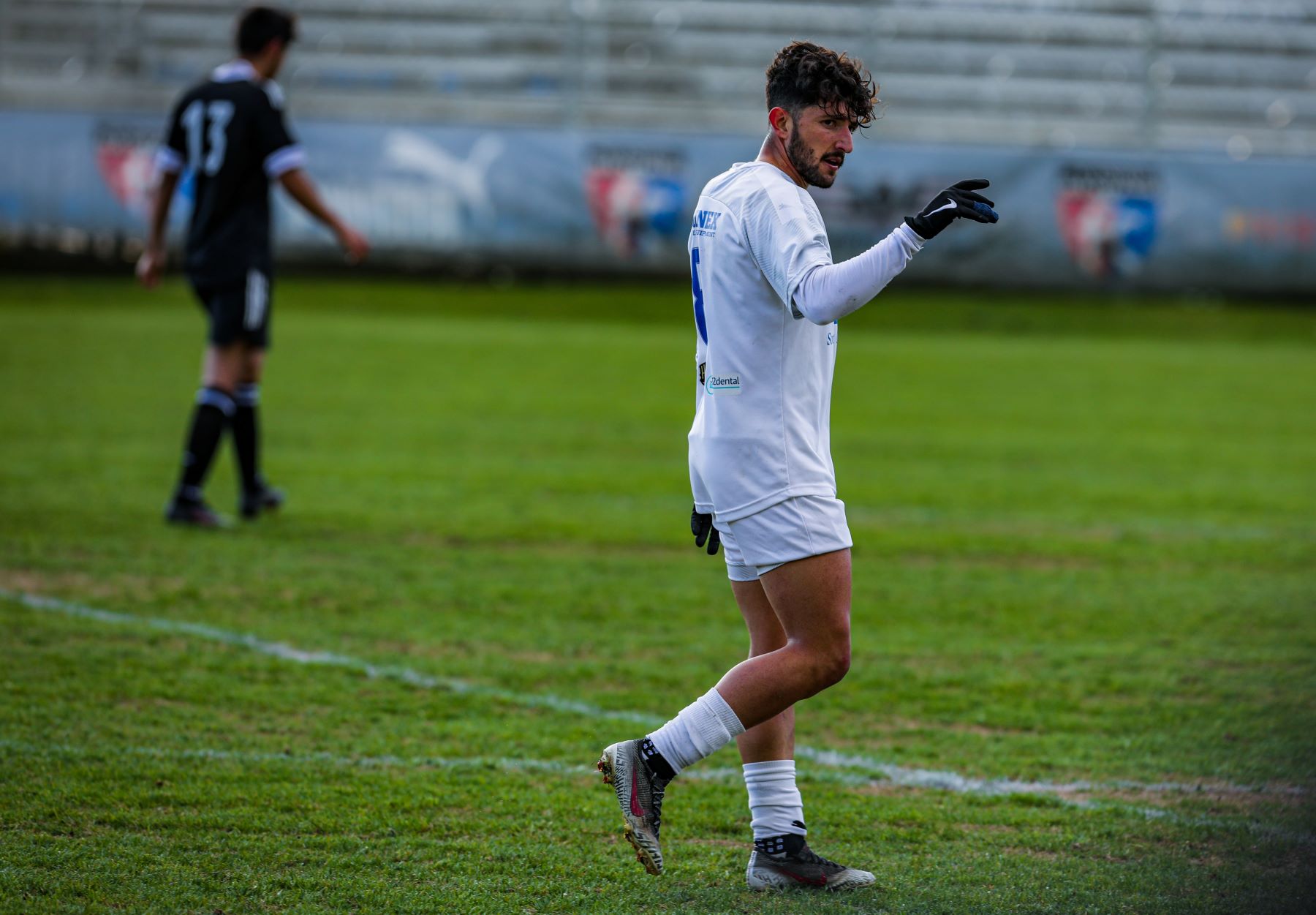 “We all have the same intentions,” said Molina. “We want to grow. There’s no money involved for us. We have nothing else but opportunity here, and that takes the greedy side out of it. It’s a pure intention.

“We want to win and we want to be the best,” said young Molina, who’s put his finger on the essence, even the beauty, of the in-between he’s found himself in. “The winning is the pay.”