CHICAGO (Jan. 6, 2023) – In a year in which she was the leading scorer for the U.S. Women’s National Team and Portland Thorns FC, won the National Women’s Soccer League Most Valuable Player and was named MVP of the NWSL Championship Game, forward Sophia Smith has been voted the 2022 BioSteel U.S. Soccer Female Player of the Year. 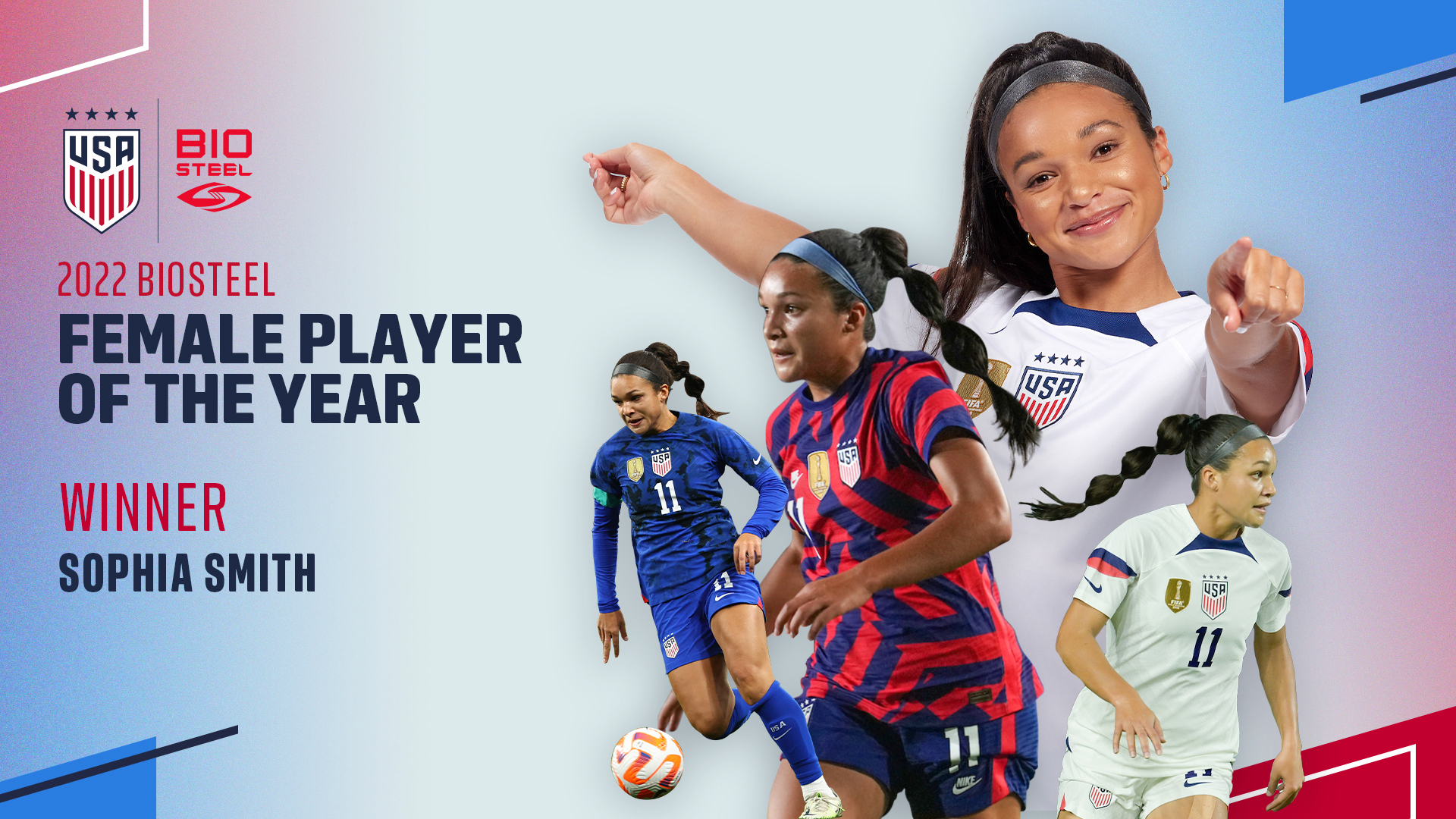 The 22-year-old Smith was the youngest player to lead the USA in scoring since 1993 and was the youngest-ever NWSL MVP. Not counting the Covid-19 impacted 2020 season, this was just Smith’s second professional season.

“Obviously this is surreal, and I’m super humbled,” said Smith. “It’s been a very exciting year, and certainly there’s been some challenges, but just being able to grow and develop in the environments with the National Team and the Thorns, and being surround by such amazing players, players that I have looked up to for so long, has pushed me to become a better player and person.”

“I’ve said many times, if you embrace these environments, you have no choice but to get better and grow, and that’s a testament to the players, coaches and all of the staff. I appreciate everyone holding me to such high standards day in and day out. This award wouldn’t be possible without all those people, and the best thing about it, is that it’s fun too. The journey is so much better when you are doing something so fun and something you love.” 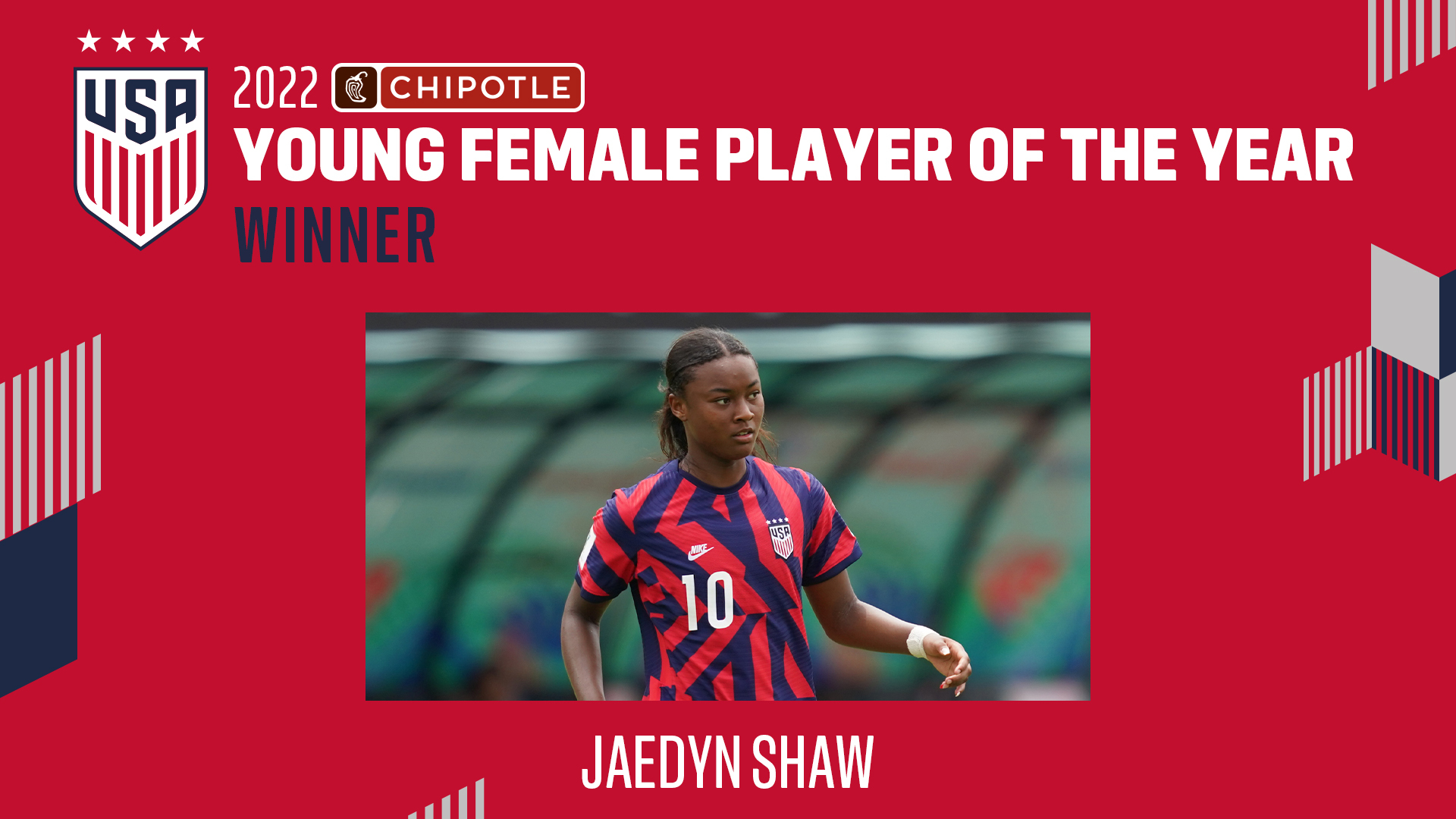 “It means everything to me to be a part of the list of players who have won this award, but it also tells me I have so much work to do to keep improving and growing,” said Shaw. “I just feel super honored and blessed and it’s an amazing way start to the year. I want to say thank you to everyone who voted for me and to all the National Team coaches I’ve worked with since the U-14 level and to my coaches on the Wave. Thanks also to all my teammates who have pushed me and will continue to push me. All of this makes me even more excited to get going with this NWSL season and to get back into camps with the Youth National Teams. I’m just excited for what’s to come and I wouldn’t be where I am today without God’s grace and favor over my life.

Smith, who is the youngest USWNT player to win Female Player of the Year honors since a 22-year-old Mia Hamm was so honored in 1994, scored 11 goals for the USA in 2022 and started a team-high 17 matches. She was second on the team with 1,192 minutes played and she scored her first career hat trick on April 9 vs. Uzbekistan, becoming the youngest USWNT player since 2000 and the fifth youngest to net a hat trick in USWNT history.

She scored 14 regular season goals for the Thorns and then scored in the NWSL title game to help lead Portland to its third league title. Her 14 goals came in 18 appearances with 16 starts. She led Portland in scoring while adding a career-best three assists. Smith’s 14 goals were second best in the NWSL this season and set a new club single-season record, surpassing Horan’s 13 goals during the 2018 season. Smith finished the regular season tied for the most non-penalty goals (11) and the most goals plus assists (17) in the league. During the 2022 campaign, Smith recorded four braces, which is tied for the most braces in a single season in NWSL history, and she was named to the NWSL Best XI First Team.

"This was a big year for Sophia, and she deserves this recognition, but I’m just excited about where she can take her game from here,” said U.S. Women’s National Team head coach Vlatko Andonovski. “She is a special player with special qualities, but the best thing is that has the humbleness, work ethic and drive to keep developing all aspects of her game. As coaches, she’s a joy to work with because she’s always looking for that edge to become better and more productive. As a person, she’s a wonderful part of our team, a fantastic teammate and we’re looking forward to her having another great year in 2023.”

Shaw earned 35.1 percent of the overall vote for the Young Female Player of the Year, just ahead of forward Alyssa Thompson (34.4%), who debuted for the senior USWNT this year at age 17.

Shaw, who turned 18 last November, entered the NWSL via the Discovery Process and signed her first professional contract with the Wave on July 18 after training for six months with the Washington Spirit. She made her pro debut on July 30, scoring 28 minutes into her first game and first start against the Chicago Red Stars. The goal turned out to be the game-winner in the Wave’s 1-0 victory and she got on a plane the next day to join the U.S. U-20 WYNT for its pre-World Cup training camp in Houston, Texas.

Shaw made a late run to earn a spot on the roster in Costa Rica, but then she played in all three matches, starting two, in what was her first FIFA World Cup. She ended the year with seven U-20 caps and three goals, scoring against Costa Rica, Mexico and the Netherlands, the latter two to help the USA win the Sud Ladies Cup in Aubagne, France. Shaw is age-eligible for the 2024 FIFA U-20 Women’s World Cup.

The Texas native not only became the youngest player to score in her first National Women’s Soccer League match, but remarkably, scored in three of her first four professional matches, finishing the season year with three goals -- one with her left foot, one with her right and one with her head -- in seven games spanning 378 minutes played, helping the Wave reach the NWSL semifinals.

Twenty-two of the 25 U.S. Soccer Young Female Player of the Year winners have earned caps with the full USWNT and 15 of them have gone on to play in a FIFA Women’s World Cup. 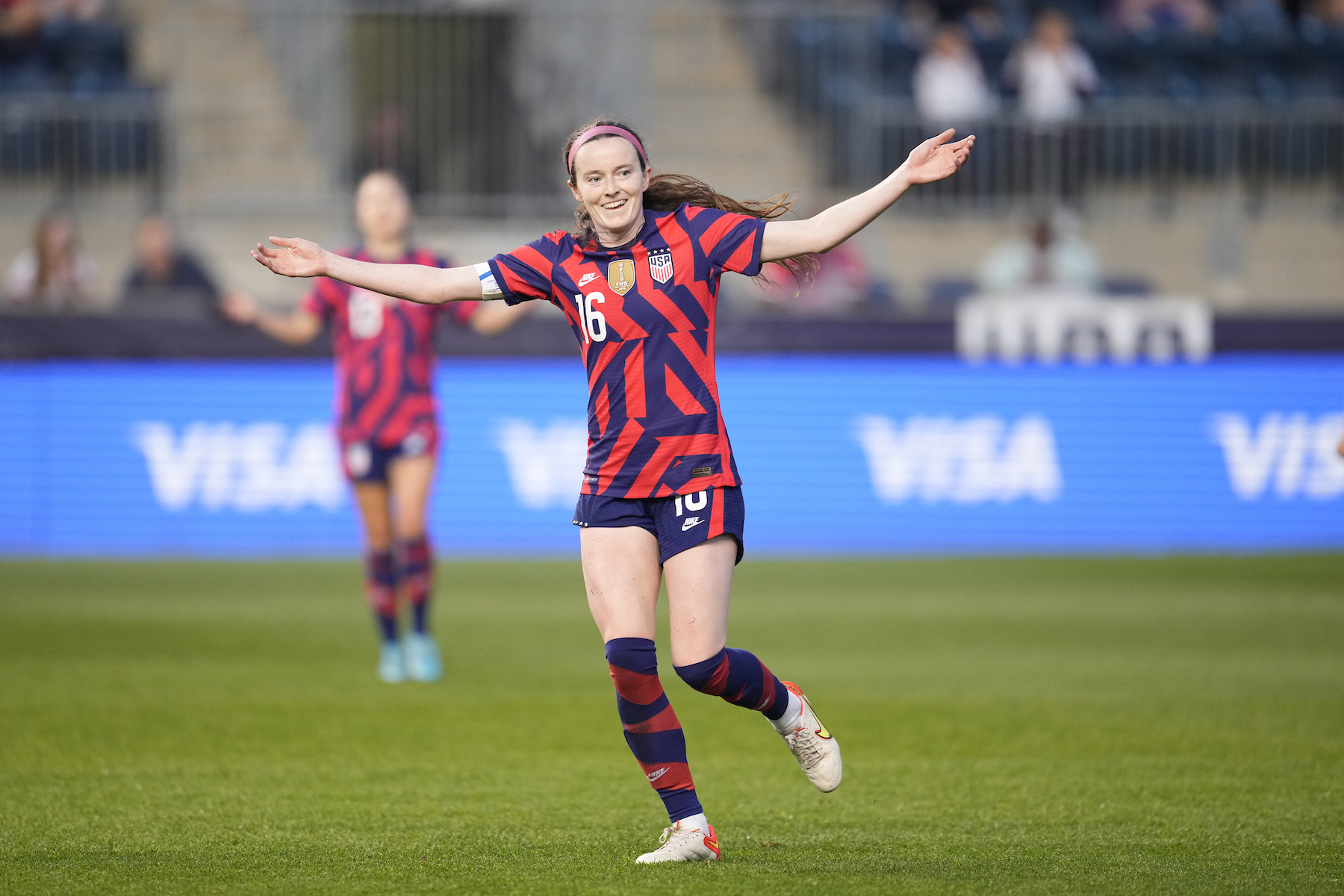 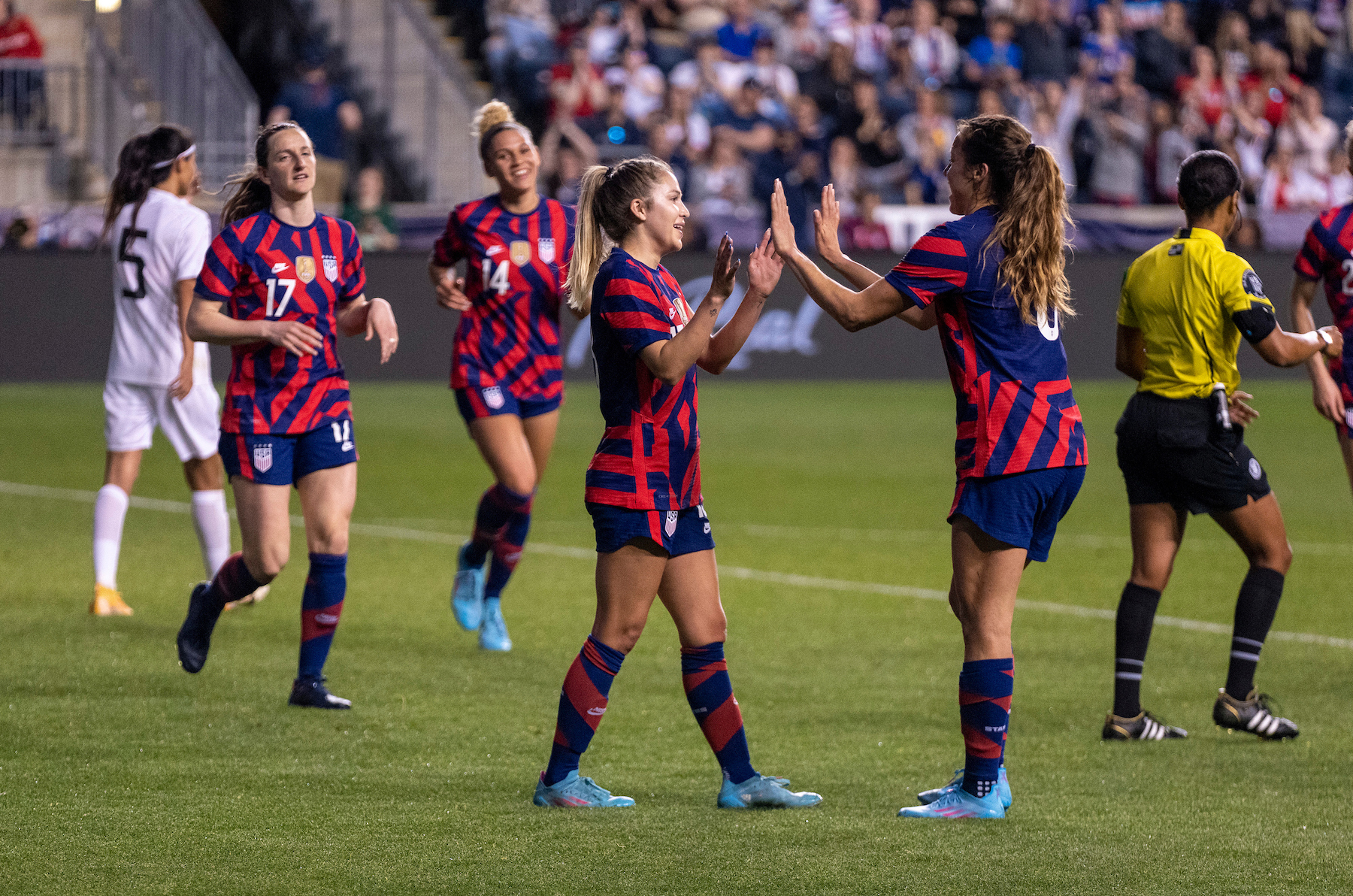 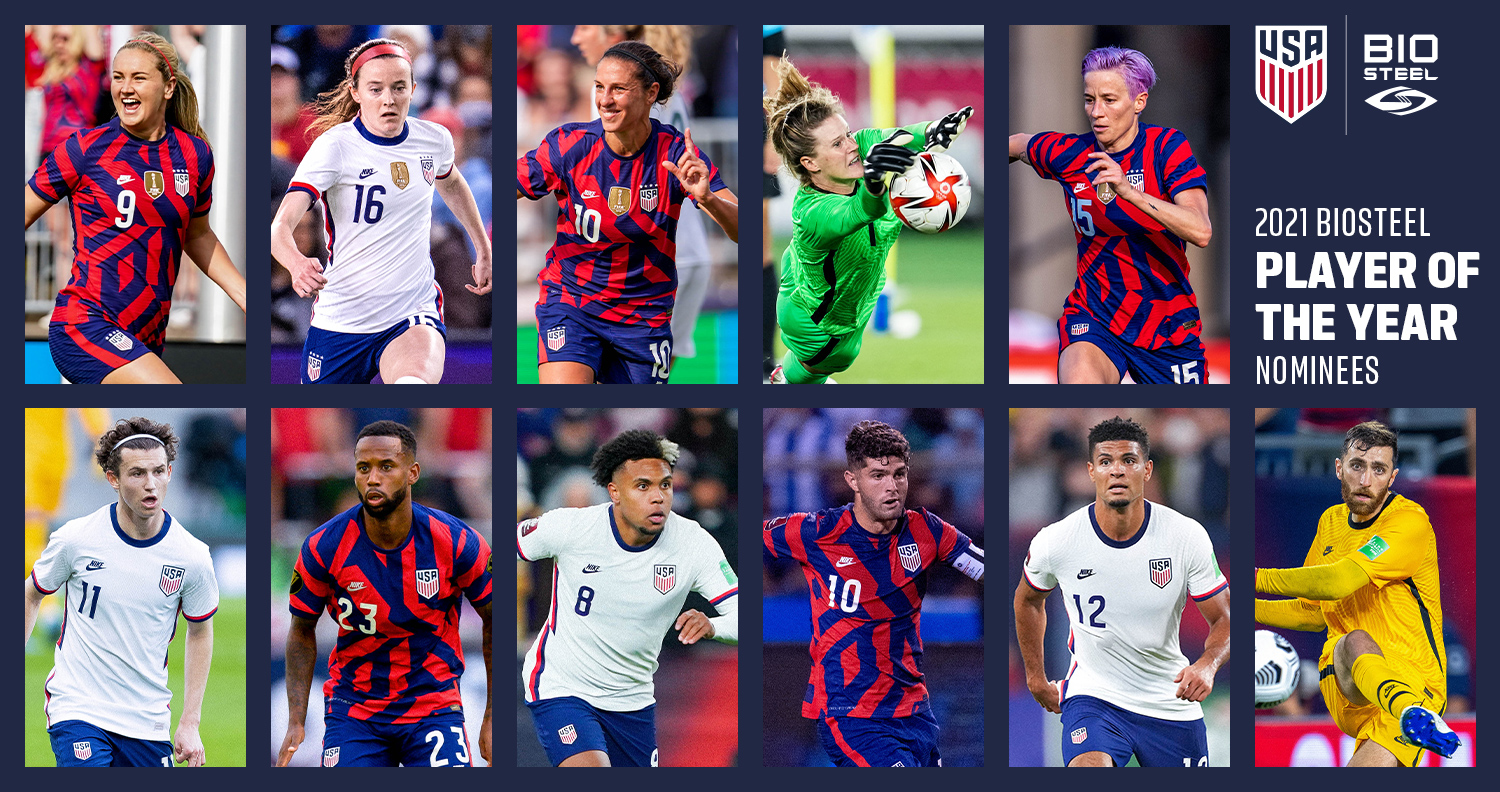