SoCal Sports Complex to Host 2018 Summer Showcase and Playoffs from June 18-30; Advancing Teams Will Stay in Oceanside for New Quarterfinal Knockout Round Format; Championships Set for July 8-11 in Kansas City, Mo., Where First Ever Girls’ Academy Champions Will Be Crowned at Swope Soccer Village
March 7 2018

CHICAGO (March 7, 2018) – The dates for the 2018 U.S. Soccer Development Academy Summer Showcase, Playoffs, Quarterfinals and Championships are set. The premier events concluding the 2017-18 season will, for the first time, see both Boys’ and Girls’ Academy Champions crowned.

After the Quarterfinal Knockout Rounds, Swope Soccer Village, home of the USL’s Swope Park Rangers and all Sporting Kansas City Academy teams, will host the 2018 Academy Championships from July 8-11. Boys’ Semifinals and Finals (U-16/17, U-18/19) will be held on July 8th and 10th, respectively, while the Girls’ Semifinals and Finals (U-15, U-16/17) will take place July 9th and 11th. 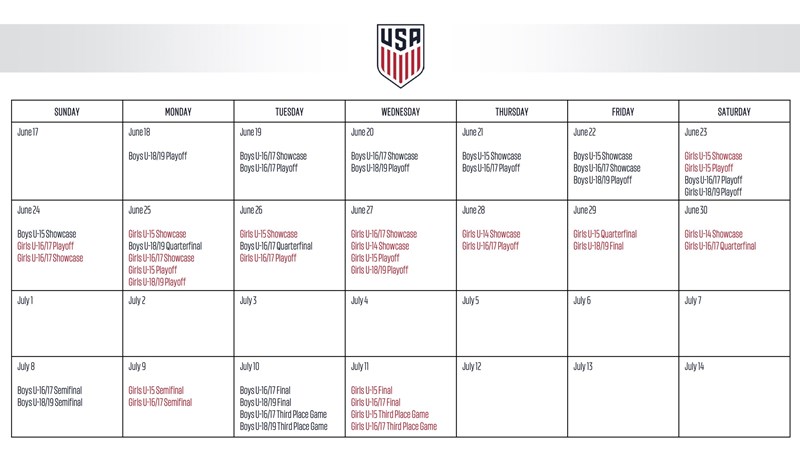 For a complete overview of the 2018 Academy postseason, including kickoff times, click here.

“The 2018 Development Academy summer events will be elevated by the first-time integration of Boys’ and Girls’ DA programming,” U.S. Soccer Development Academy Director Jared Micklos said. “Our goal is to create the optimal environment for players, coaches and referees to perform at the highest level in our country.  We share an excitement and confidence that the San Diego and Kansas City venues will provide two world-class environments for athletes to compete and be evaluated for elite youth, college and professional playing opportunities.”

Per U.S. Soccer Medical and Technical Staff, the Development Academy Playoff, Showcase and Championship competitions will each feature one rest day so maximum of three games can be played over any four-day span. This competition structure has been designed with a focus player safety well-being.

Combining the Showcase, Playoffs and Quarterfinals schedule at the SoCal Sports Complex provides an environment best suited for all Academy clubs, players, scouts and spectators. The format also gives Academy Directors the ability to attend all their club's games. Scheduling all age groups in the same location over the same time also provides opportunities for elite players to play up with older age groups.

The Draw for the 2018 Playoffs will be conducted after the conclusion of the Development Academy Regular season, in early June.

GIRLS U-18/19 PLAYOFFS AND CHAMPIONSHIP

Held entirely at the Oceanside So Cal Sports Complex, the Girls’ U-18/19 Playoff structure will be a 16-team, single elimination competition held June 23-29 with June 24 and 26 serving as rest days. The Final will be played on June 29 at 2:30 p.m. PT.

In order to reduce travel and lengthen the summer off-season to better prepare for the 2018-19 season, the Quarterfinal Knockout Round games have a new format. Previously, teams traveled back to their home environments, where higher seeds would play host to lower seeds who were required to travel. Under the new structure, playoff group winners will continue play in Oceanside, after another rest period following final group games.

The Quarterfinal Knockout Rounds will feature the eight group winners for each of the following playoff age groups: Boys’ U-16/17 and U-18/19; Girls U-15 and U-16/17. The matchups will be based on playoff seeding.

Featuring meaningful, hand-picked matchups, showcase games are for all U-14 Girls’ and U-15 Boys’ clubs, as well as all Girls’ U-15 and U-16/17 and Boys’ U-16/17 teams that do not qualify for playoffs. Showcase games are designed to provide additional, challenging games and another opportunity for players to experience meaningful competition and perform in front of professional and collegiate scouts.

A LOOK BACK AT THE 2017 POSTSEASON

The 2017 Development Academy Championships saw Atlanta United FC and Texans SC Houston emerge as the winners in the Boys’ U-15/16 and U-17/18 age groups, respectively. It was a first-time achievement for both clubs. Atlanta brought home the hardware in their first season in the Development Academy with a 2-1 win against defending U-15/16 Champions FC Dallas, while Texans SC Houston brought back the first Academy title to the city of Houston with a 2-1 defeat of LA Galaxy.

U.S. Soccer Development Academy partner Anthony Travel is proud to be the housing provider for Academy Clubs to book lodging, airfare, vehicle rentals and any other travel needs.  All clubs are required to make their accommodations exclusively through Anthony Travel. Anthony Travel strives to obtain and contract the lowest rate with the best area hotels, while including terms necessary to protect the clubs. Click here to learn more about the benefits of booking with Anthony Travel.

Clubs may book team reservations by visiting the Anthony Travel website, calling 1-800-736-6377. Clubs may also email soccer@anthonytravel.com with questions or for additional assistance.

As Boys’ Academy alumni have progressed to play at elite amateur and professional levels with MLS paving the way, NWSL Clubs have also created Academy teams in an effort to develop the same pathway for future female players to progress to the professional level.