The staff of the world’s top-ranked Women’s National Team are not resting on their laurels.

As the U.S. Women’s National Team continues preparation for October’s 2018 CONCACAF Women’s Championship, which will serve as the World Cup qualifying tournament, the players will do so with the support of a newly-created, dedicated High Performance support team that consists of full-time experts in the fields of sports medicine, sports science and performance analysis to assist players and coaches on a year-round basis.

“One of the High Performance departments objectives is to link the multi-disciplinary teams together more cohesively, so there is more integration of knowledge, of data and of operation,” says James Bunce, Director the High Performance department. “My role is to bring these hugely integral technical and skilled areas together to optimize every area of player health, performance, psychology, conditioning and analysis of team tactical principles to make sure that every player – when they step on that pitch – not only is healthy and fit, but also prepared to win at the highest level.”

So, what exactly is this ‘new’ group, and how does it support the WNT?

Under development since Bunce was brought on in early 2017, the High Performance department is an initiative under U.S. Soccer’s Sport Development umbrella. The High Performance Department is focused on creating the best conditions in the areas of sport science, sport medicine and performance analysis for players, coaches, leaders and referees to develop and perform, through programs that allow them to achieve their ultimate potential.

“Each one of those areas offers expert support to the athletes and coaches in their own right,” explained Bunce. “For example, our athletic trainers are making sure our players are staying fit and healthy on and off the pitch. The sports scientists are working closely with the head coach to make sure that we’re optimizing our training loads and recovery. And Performance Analysts are looking to, for example, use data and information to help support the coach in their game plan and team set up.”

It’s not like the WNT didn’t have some of these functions in the past, it certainly did, but now many positions feature full-time rather than part-time staff, while others are new positions filled by new hires. In addition, the staff now works out of the Federation offices in Chicago when not in training camp or on the road, which provides added benefits, according to Bunce.

At each camp, the High Performance support staff for the WNT consists of a full-time head athletic trainer, physical therapist, sports scientist, sports psychologist, physicians, massage therapists and additional trainers or therapists as needed, depending on the size of the camp. In addition, there is a full-time performance analyst and a technical videographer to film each practice and game.

The task of developing and supporting the staff and processes within the federation for Sports Medicine falls to Senior Manager, Lea Thomann, an accredited Athletic Trainer and Physical Therapist. In establishing policies and standards, Thomann’s aim is to establish a cohesive group of professionals in their respective fields of expertise.

“The Sports Medicine group’s role in the Women’s National Team environment is to recognize, evaluate, treat and manage any injury that occurs,” said Thomann. “That will encompass collaboration with our head athletic trainer and our team physician to assess and diagnose the athletes’ condition, and then it will also encompass the head athletic trainer and our physical therapist with progression in terms of therapeutic exercise and longer-term rehabilitation plans. Additionally, outside of camp, that team is working together with the NWSL and colleges that our players might come from, to support their home environment.”

And while the High Performance department is technically separate from the WNT coaching staff, the two groups work together constantly. In fact, WNT head coach Jill Ellis was instrumental in this department coming together.

“Jill has been fully involved in the formation of this team on a high level,” Bunce noted. “She’s tremendously open and wanting to know more about performance, about pushing the boundaries, about finding more data and finding more information to integrate into her decision-making process.”

In her fifth year leading the WNT, Ellis was part of the recruitment process for all the High Performance hires, “both to make sure they are a cultural fit within the environment, but also so they offer that next level of expertise that she wants,” added Bunce.

Representatives from each specialized technical area sit in on WNT coaches’ meetings to provide data and information, and to bring back to their group whatever requests or questions the coaching staff might have

“Jill’s the head coach. She has the ultimate decision on who’s playing or not playing, how she’s going to technically and tactically set up against an opposition,” Bunce said. “But now she has this team of support staff from the High Performance department that are going to her with real, quantifiable evidence of data and player performance to hopefully help make those decisions easier.” 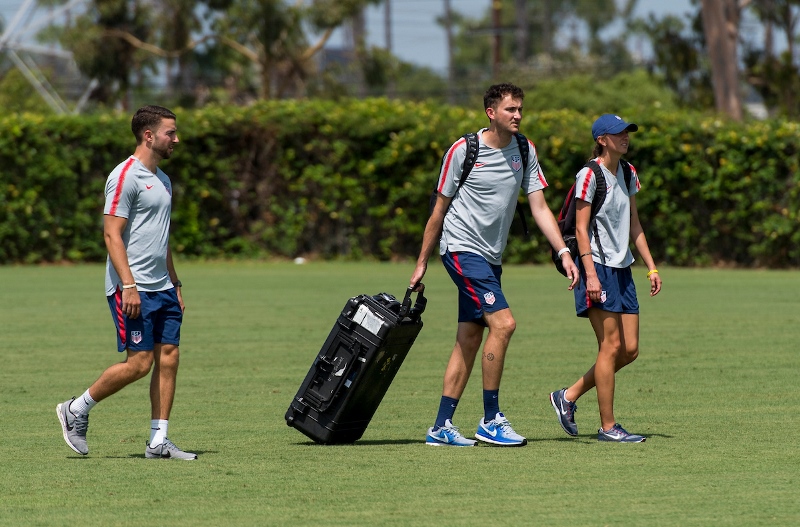 High Performance staffers prepare to set up their equipment at a U.S. WNT training session.

Beyond the Sports Medical and Sports Science divisions, a key element of the High Performance department is the rebranded Performance Analysis side, whose main goal is exactly as labeled, to analyze performance. Utilizing data partners like OPTA, the group can better track individual and team performance and use data and statistical analysis to better understand opposition weakness or areas that the team could potentially exploit.

Recent changes by FIFA now allow for teams to transmit technical and tactical data to the bench during games, whereas previously information could only be shared at halftime or post-game. This was first implemented at the recently completed 2018 FIFA World Cup in Russia.

“We’re able now to use this data to help the coaches, providing them with information that could potentially have an in-game solution,” Bunce explained. “Not only do we have a full-time staff member who is a dedicated and trained performance analyst, but we now have a lot more integrated data both within the Federation and partners externally who are working with us to make sure we are optimizing our data collection and integrating it into the decision-making process.”

As noted, the role of the High Performance experts do not end when a camp or tournament ends. Players have access to the full complement of support staff at any time. In addition, the staff will be in contact with the players’ clubs to extend the areas of support.

“Our Sports Science and Sports Medicine staffs, along with the WNT, are developing strong relationships with the staffs in the NWSL,” Thomann added. “They work together during the off-season and regular season to collaborate on the care of our National Team players. This may include weekly communications with head athletic trainers and other medical staff at NWSL, rehab or management of injury, and supporting or assisting clubs with our National Team players.”

With this department now in place to support the WNT, Bunce anticipates even more growth in an ever-evolving industry, as new research and technologies are introduced.

“Over the next 12 months we’ll look to extend that even more, by establishing even bigger and more ground-breaking projects, research, standards, policies and processes to drive U.S. Soccer to be a world-leader across all those areas including: Sports Medicine, Sport Science and Performance Analysis,” he said.

A similar High Performance team is being established for the U.S. Men’s National Team.

“The WNT are the world champions. They’re a high priority for us as one can imagine,” Bunce noted. “But we’re implementing similar standards across all our environments. We’re working closely with Earnie [Stewart] now on the men’s side to implement the structure behind the Men’s National Team that’s also going to be world class in supporting their environment.”

The High Performance department has also made significant hires on the youth side, bringing on full-time Athletic Trainers and Sports Scientists to the Youth National Teams. Full-time Performance Analysts have been hired for the first time to support the U-17s and U-20s during their respective World Cup Cycles. The department also collaborates with and offers significant support to the other U.S. Soccer Sporting Development areas: Development Academy, Coaching Education, Talent Identification and Referee Programs.

“It’s not just about adding support to the Women’s National Team, but also across all of our National Teams and all members of U.S. Soccer,” he said. “The work that we’re doing is designed to integrate information and build standards, policies and procedures to make sure player experience and coach support in all environments is at the highest level.”

BTC: U.S. Soccer’s High Performance Department is Maximizing the WNT On and Off the Field
Tags
WNT
2018 CONCACAF Womens Championship