Pittsburgh’s Mertz & a Move Back Home

There’s something embarrassing about moving back home after college, but not for 22-year-old Robbie Mertz who’s having a rookie season to remember for his beloved Pittsburgh Riverhounds.
Jonah FontelaJune 7 2019
Open Cup

Robbie Mertz looked around and asked the question: Now What?

Taken in the Fourth Round of the 2019 MLS SuperDraft by the Colorado Rapids, 76th overall, the All-American midfielder’s time in mile-high Denver was up, just a few weeks after it started. It’s a common crossroads for many college stars. It’s not always a smooth transition to the pro scene. It doesn’t always work out.

But Mertz, a native of Pittsburgh, PA, had a card to play. “The first call I made was to the Riverhounds,” he told ussoccer.com. “I needed a place to go and I was blessed that I could call on my hometown team for a chance.” 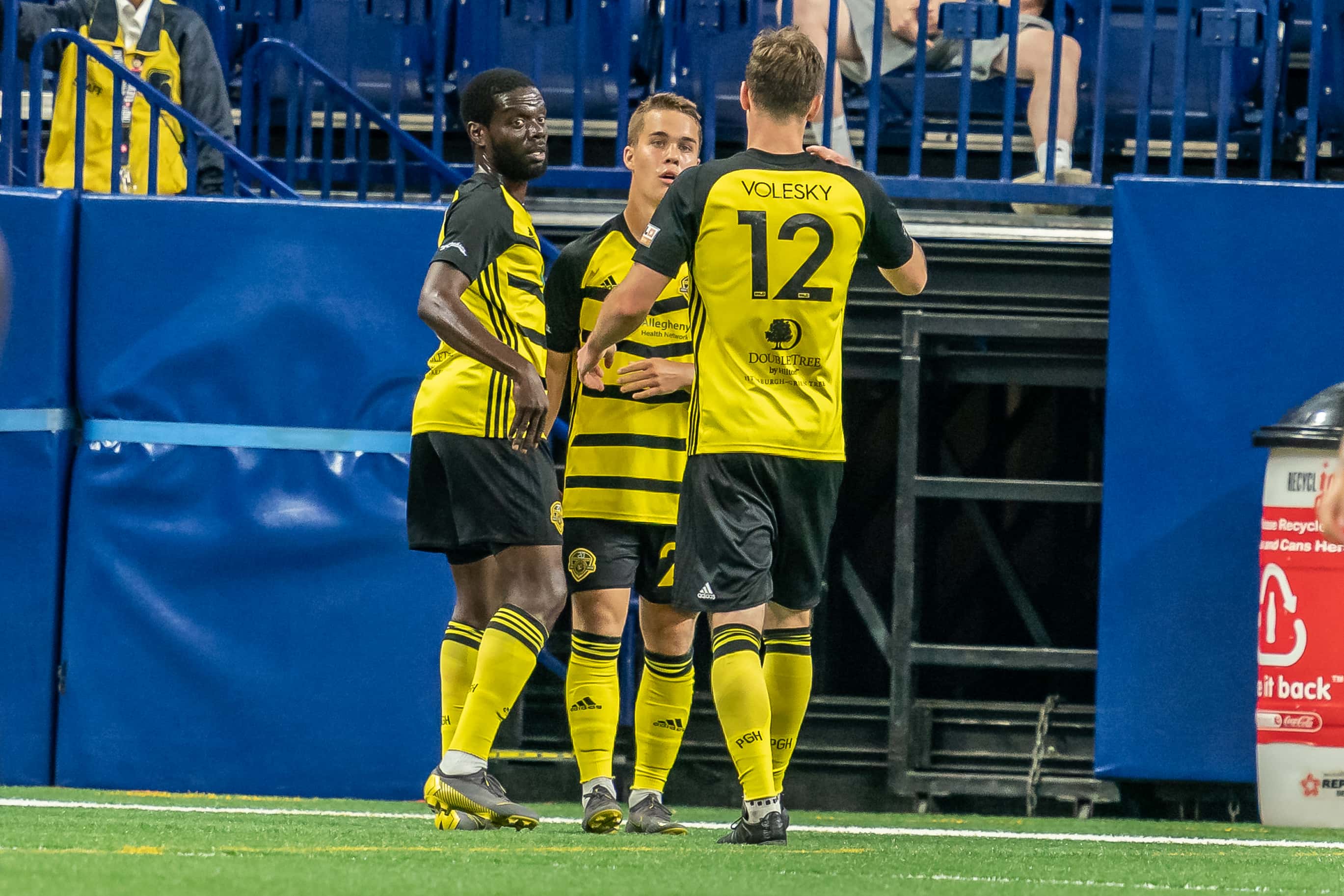 Mertz celebrates his first goal as a pro against Indy Eleven
It wasn’t charitable goodwill for a prodigal son that caused Riverhounds coach Bob Lilley to return the call. Not by a long shot. Mertz, still just 22, has everything you want in a rookie pro. “He’s smarter than a lot of guys on the field,” said the matter-of-fact coach, who’s been with the Pittsburgh USL Championship outfit since last season. “He reads the game and he’s grown a lot as a player, even in the last year.”

Long, Strong Ties to the Hounds

Mertz has history with the Riverhounds, like any soccer-crazy Pittsburgh kid coming up in the last 20 years. He was a ball boy for the club when they played their games at Chartiers Valley High School, before the opening of Highmark Stadium in 2011.
“The club’s been here for about as long as I’ve been alive,” said Mertz, a clever youngster who received as much praise for his academic achievements at the University of Michigan’s Ross School of Business as he did out on the pitch of the U-M Soccer Stadium with the Wolverines. “I went to games as a kid and I was a part of the academy for a little while, so the club was always something that was there for me. It’s been a part of my life and my development as a player.” 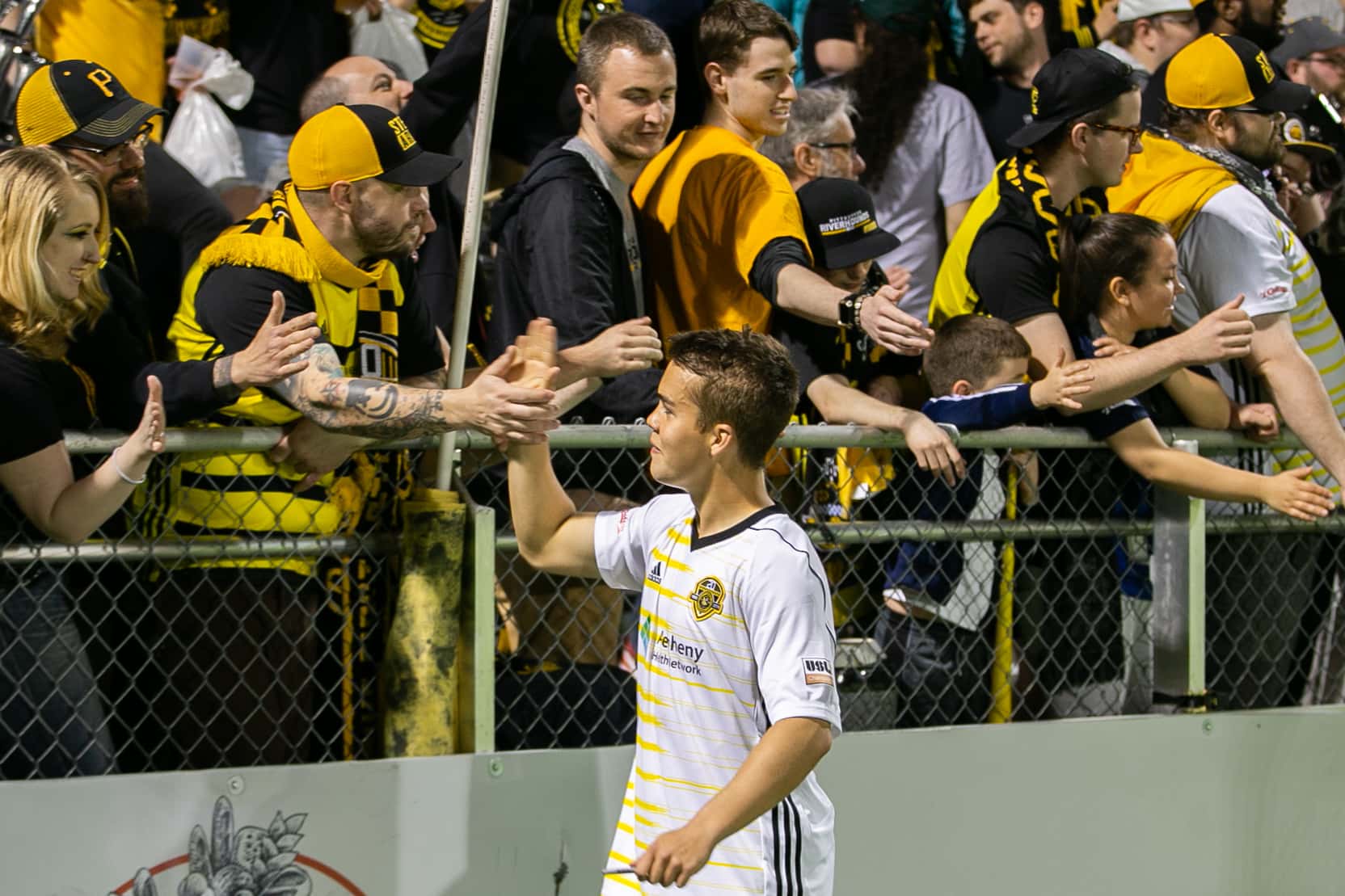 Mertz with the Steel Army supporters in Pittsburgh
He’s home. It’s where all odysseys end up. With the way he’s playing, he may not be there for long. But for now, at least, he’s basking in the sights and sounds of gameday as a freshman professional, supported by friends and family and the comforts of familiar surroundings. “Highmark Stadium’s been a big part of my soccer life,” he said, remembering playing high school state championship games there with local powers Upper Saint Clair. “I won big games there and lost big games there and I think it’s one of the coolest venues in the country. People tailgate right on the [Monongahela] River and head right up into the Stadium. It’s a special place.”

The nimble midfielder, shorter than his listed height of 5-7, joined the Riverhounds officially in late March, three games into the team’s current season. He made his debut as a sub in April against Louisville City and, after missing a game against the Charleston Battery to attend his college graduation, Mertz made his first start. Since then, he’s made three more and looks to be a certainty in Lilley’s midfield, where he’s right at home surrounded by old pros, many of them from shores as far away as Ethiopia and Cape Verde. He started both of the side’s Lamar Hunt U.S. Open Cup games so far in 2019 and is set for another, against Columbus Crew of MLS, on June 11.

It came down to the wire!😱

A late goal breaks the tie and sends the @RiverhoundsSC to victory over @IndyEleven!👏

His first goal, on the road in a league game against Indy Eleven, was a perfect example of what Mertz does best. Striker Christian Volesky made a jinking run through the penalty area and rifled a challenging pass in the youngster’s general direction. Mertz, always thinking, controlled with a clever combination of thigh and abdomen and fired – all in one motion – with his left foot. It was a goal that required quickness of thought and feet both. It looked like a veteran’s goal.

He’ll never be the biggest on a pitch, but Mertz can hold his own
“The details of the game become a little more important at the pro level,” said Mertz about the differences from college to now – being paid to play and with professional expectations every day. “Your position in defending, yes. Speed of play, yup. And there’s a level of fitness that’s just a little higher. I’m starting games now and when you start a game you’re not thinking of the 89th minute, but it’s something to consider.”

With a youth career like Mertz’, playing for some of the top academy teams in the country like Chicago Fire U-23s and California’s Burlingame Dragons, you’d expect some early-round Open Cup action to have come his way. But it hasn’t. This 2019 run with the Riverhounds is his first taste of the blood and thunder of Cup play.
“The games are intense and they all need a winner,” said Mertz, who was part of the side that scored with five minutes left to avoid extra-time against Indy Eleven in the Third Round. “And going up against Columbus Crew, we’re the underdogs. We’ll have that with us. We have nothing to lose and we can just go out and do our thing. In that position you can play a little bit free, which isn’t something you get to do very often.” 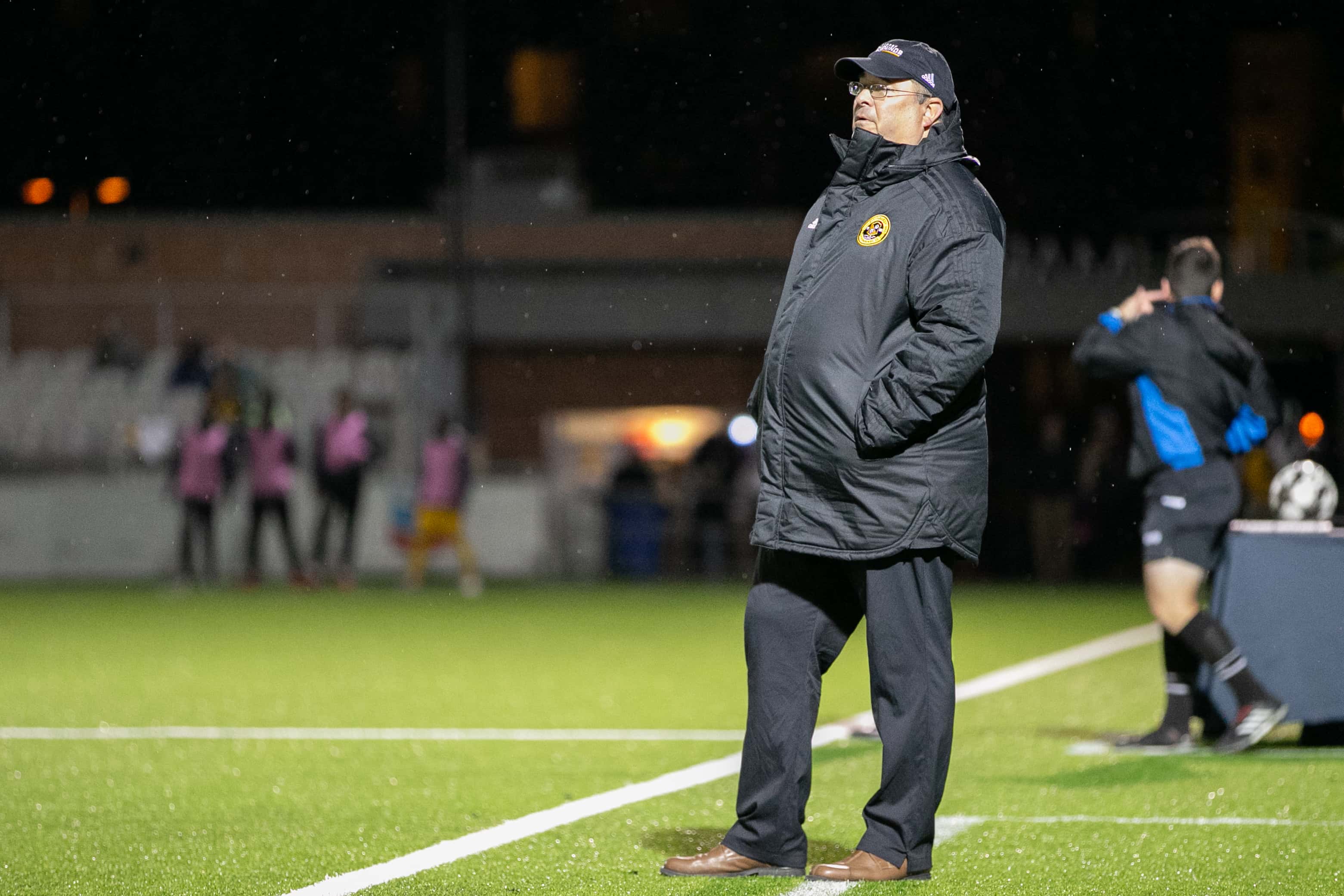 Riverhounds coach Bob Lilley didn’t hesitate when Mertz became available
His experience with the Rapids, that short-lived time up in the thin air of Denver, might serve Mertz well when the whistle blows against the top-tier team from Ohio. “It’s fresh in my mind what it was like,” said Mertz, who carries himself like an old pro even at such a tender age. “The pace of play, how dedicated everyone was at the MLS level. We’ll need to be organized and get through it together, because if you leave spaces and give an MLS team a sniff, they’ll hurt you. That’s just reality.”