With MLS’ Orlando City through to the 2019 U.S. Open Cup Semifinals, usopencup.com takes a look back at the only team from the state of Florida ever to win an Open Cup crown – the 1989 St. Petersburg Kickers.
Jonah FontelaJuly 30 2019
Open Cup

Steve Gogas looked down his bench, a hand shading his eyes from the punishing summer sun. The coach nodded to Gordon Singleton and asked if the knee was good enough to take a penalty. There were ten minutes to go in overtime of the 1989 U.S. Open Cup Final in Saint Louis and the game was deadlocked and destined for a shootout. Singleton looked at the primitive brace holding his left knee together, thought for a moment, and jumped to his feet. “Why not?” he said.

Sometimes, in the Open Cup, heroes are made with a shrug.

“I was definitely not supposed to play that day,” said Singleton, who’d seriously injured his knee in the St. Petersburg Kickers’ final league game before that year’s U.S. Open Cup Semifinal. He had surgery 17 days before the Final to repair a meniscus tear and a 15 percent lateral tear in the ACL – which was followed by a blood clot that landed him in the hospital a second time. “The only reason I was even in uniform that day was because it was the only way to be on the bench. I was really upset about not being able to play, but I wanted to be there and be a part of it.” 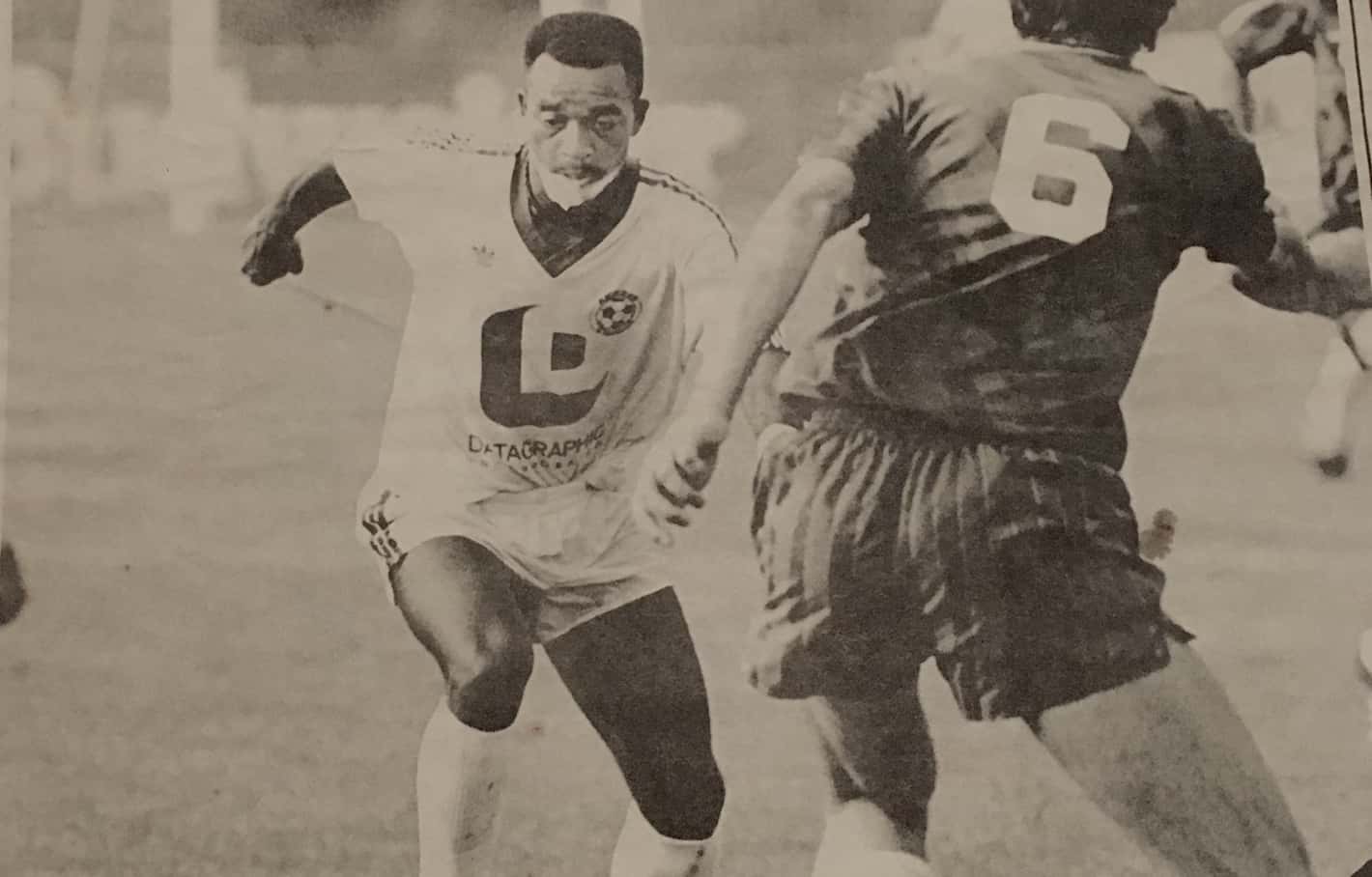 When center-back and man-marker extraordinaire Andy Daxon, wilting in the 106-degree heat of a long day at the Saint Louis Soccer Park, saw Singleton getting up off the bench, he shouted. “Hey, what the hell are you doing?” Singleton remembered. “I just joked to him, ‘don’t worry, get the ball up to me, I’ll score and we’ll go get ourselves a cold beer.’”

And that’s exactly how it went. Andy Daxon, one of three brothers in that Kickers team, sent a long, looping ball up the field from deep in his defensive half. “The ball went really high so I was able to get under it and beat the offside trap,” Singleton told usopencup.com. “ I chased it in all by myself. I was about 12 yards out, coming in off the right and I slipped the ball under the keeper [the outstanding Dragan Radovich, formerly of the NASL’s Portland Timbers and Washington Diplomats] and that was that.”

It was Singleton’s first touch of a game he had no earthly business being in. The seriousness of his injury is no fish tale, bloated and exaggerated by time and telling. “I mean, he was not supposed to play for eight months,” said midfielder Craig Fossett. “And here he is 17 days after the surgery, coming on and winning the Open Cup.” 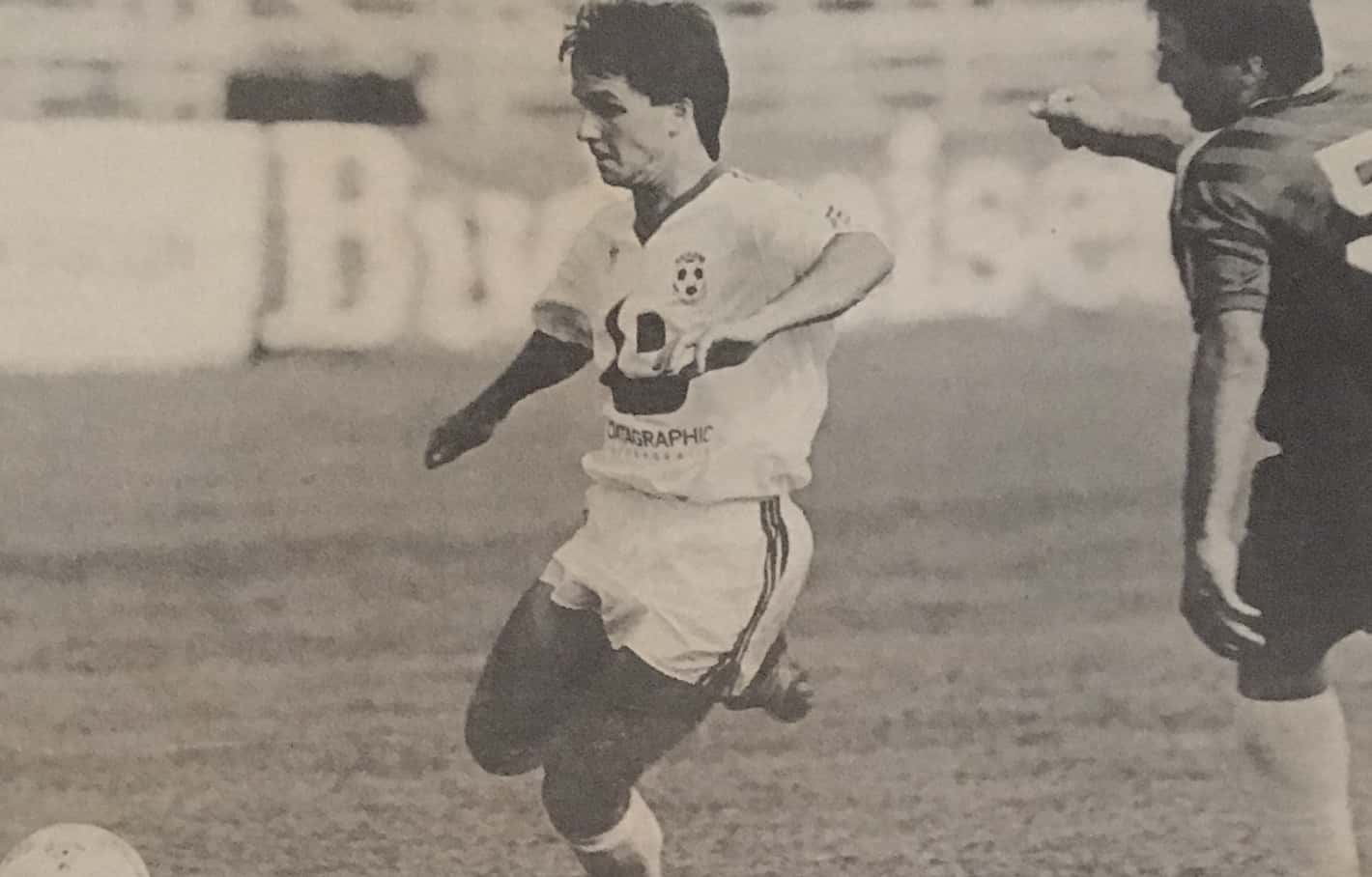 Singleton’s slotted goal made sure the Saint Petersburg Kickers became the only team from Florida ever to win a U.S. Open Cup. It’s a record that stands strong to this day, with MLS’ Orlando City looking to put it to the test with a place in this year's Final. “I earned a nickname that day, the Gimpy Sub, and it stuck to me,” said Singleton 30 years later at an impromptu reunion in a barroom in Tampa Bay. It was a time to remember that moment when a group of friends – most born and raised in the area and energized by the NASL’s Rowdies of the 1970s and early 80s – carved out their own little piece of American soccer history.

“The game was a battle,” said Fossett, the team’s holding midfielder who happily did the dirty work for star player and 1989 Open Cup MVP Tony Valenti, a former USA youth international and twice an All-American at Duke University. “It was hot and the grass was long and nothing was easy that day. The game was right in the middle of the summer. But we were younger and fitter and I think that played into it. You’re fighting for the ball all the time and the grass is heavy and we fought for everything we got.”

After a rout of Genesis FC of Georgia and then FC Dallas, the Kickers were up against two grizzled veteran teams from up North in the Semifinals and the Final. Their Semifinal game was played at home against the Chicago Eagles, a team that would go on to win the 1990 Open Cup and boasted a raft of Polish ex-pros and old campaigners. “That Semifinal must have been played in 410-degree heat,” said Fossett with a laugh about the game that finished 1-1 after overtime and needed a penalty shootout – and a heroic performance by Kickers goalkeeper Brett Phillips – to seal a spot in the Final. “And we made sure that kick-off was right around noontime so the guys from Chicago felt it. They were probably ten years older than us on the average and individually they were definitely better than us.” 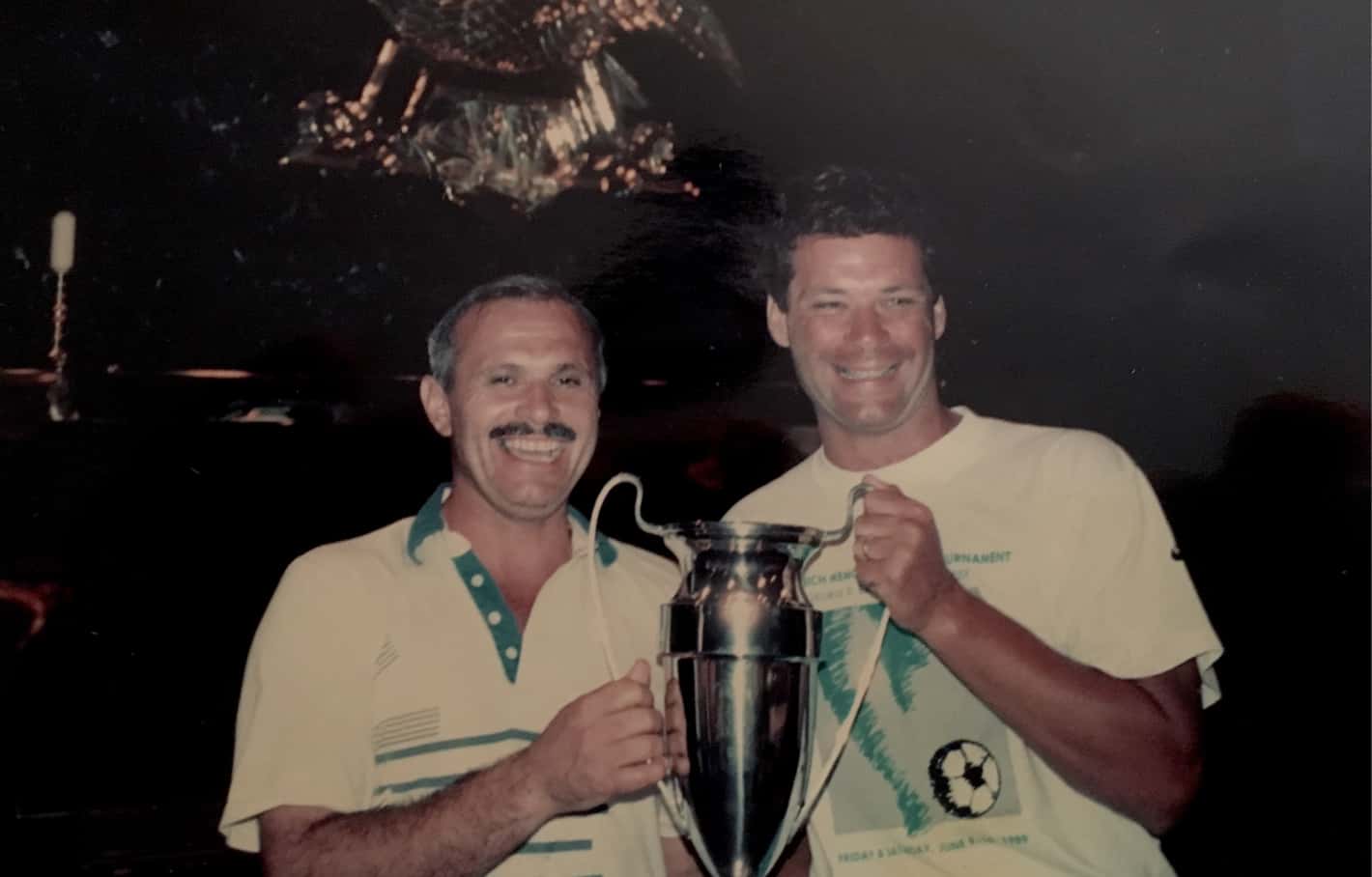 In the end it didn’t matter. Talent wasn’t always the deciding factor in those rough-and-tumble Cups days. Enthusiasm, effort and a tight-knit group counted for much in the semipro days of the 1980s. The Kickers had all of that in spades. “You don’t win something like that just for turning up,” said Jim DiNobile, back-up goalkeeper on that hot day in Saint Louis and the man who ran the team’s grueling training sessions. “We trained our asses off – maybe three times a week. And we didn’t just kick around. We trained hard and did sprints at the end – the whole nine.”

“The interesting thing about the group is that we had a bunch of guys who just bought in,” said DiNobile, now in his mid sixties and retired after 25 years as head coach at Eckerd College. He has a detailed recall of that Final from his perch on the bench. “We were the right blend of experience and ability and youth. We worked so hard and if you have all that, and a few bounces go your way and you never say die, you’ve got a chance in every game you play.”

Long-time Kickers head coach Gogas (of Greek ancestry himself) did all the research he could on the Greek Americans (Atlas AA) from Queens, New York, considered favorites by most on the day. “They had guys whose names you knew like John Lignos [former U.S. international and NASL standout] and Radovich in the goal,” said DiNobile. “It ended up being a pretty conservative game because of the heat – and both teams had chances to score.” 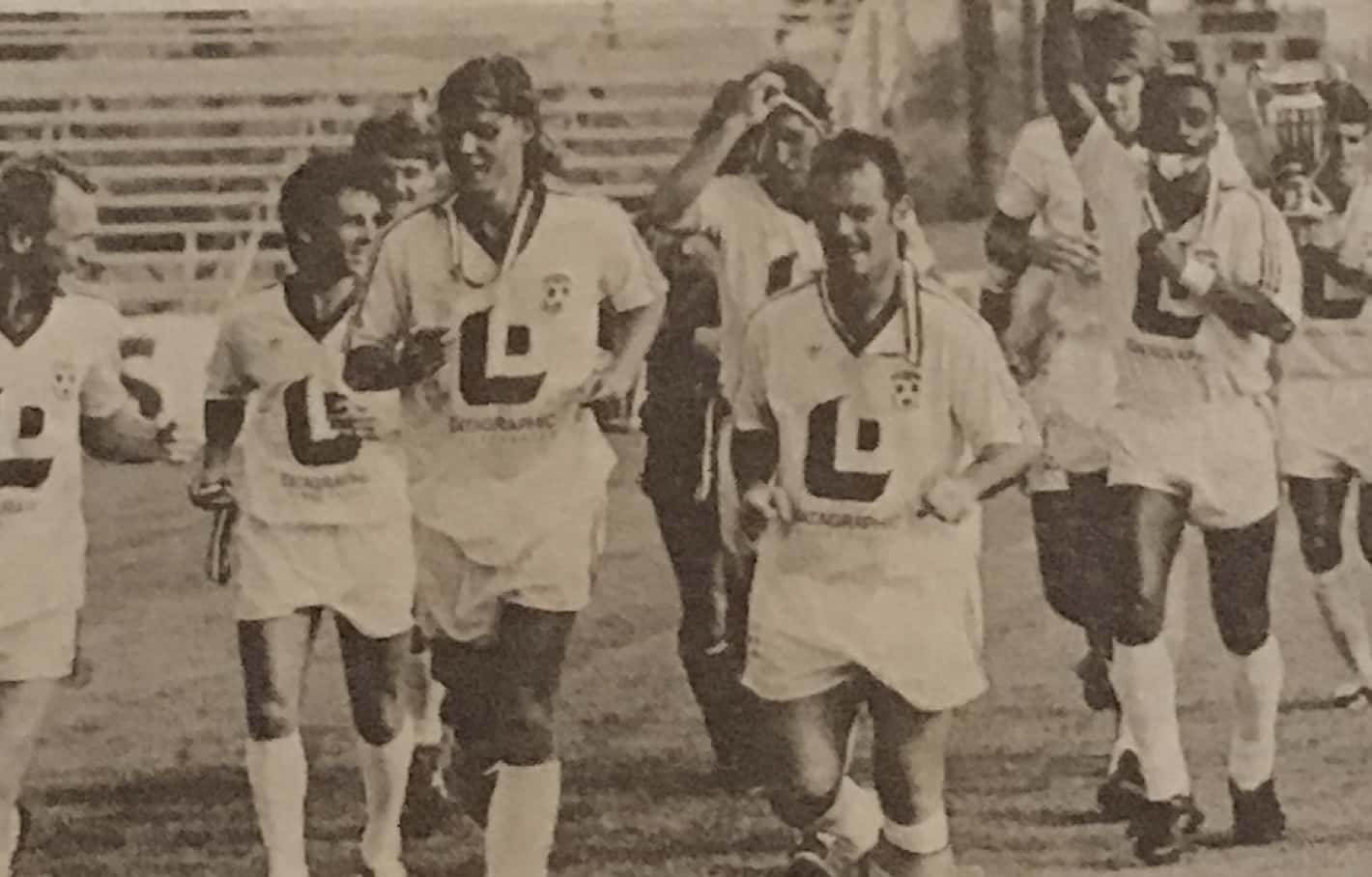 The 1989 victory lap with Singleton front and center and Fossett on piggy-back
Garth Pollonais – a future Trinidad & Tobago international – opened the scoring for the Kickers in the 46th minute with a curling free kick. “The game caught fire here and there,” said DiNobile. “Then it slowed down and settled a bit. It was an even game.” After Lignos equalized in the 80th minute, for once slipping the watchful eye of Andy Daxon, the game headed for overtime. No one wanted an extra 30 minutes in the sweltering heat.

That’s when Gogas looked down his bench and saw he was short of options. Singleton was the only move, with a brace on his knee that looked like something out of a World War II movie. “It wasn’t even my brace,” he laughed. “I borrowed it from [defender] Billy Fautner the day before at training and I was able to take a pretty good penalty kick with it on. But you couldn’t believe this brace – it had all this metal going down the side of it and it was nothing like the sleek little ones you see today.”

You have to wonder if Gogas saw something in Singleton’s eye – a twinkle of confidence maybe. It was a gamble worth taking and the striker himself, who came to Florida from Manchester, England when he was eight and was a reserve in the old Tampa Bay Rowdies teams, was eager to do his part on a day when his teammates – most of them friends since boyhood – worked and suffered and toiled in the unforgiving heat. “It was pure instinct, that goal,” Singleton said about his winning strike. “I didn’t even think about the knee or anything. I just got on the field and it’s like I was right back to where I was three weeks before, before the surgery and the injury.” 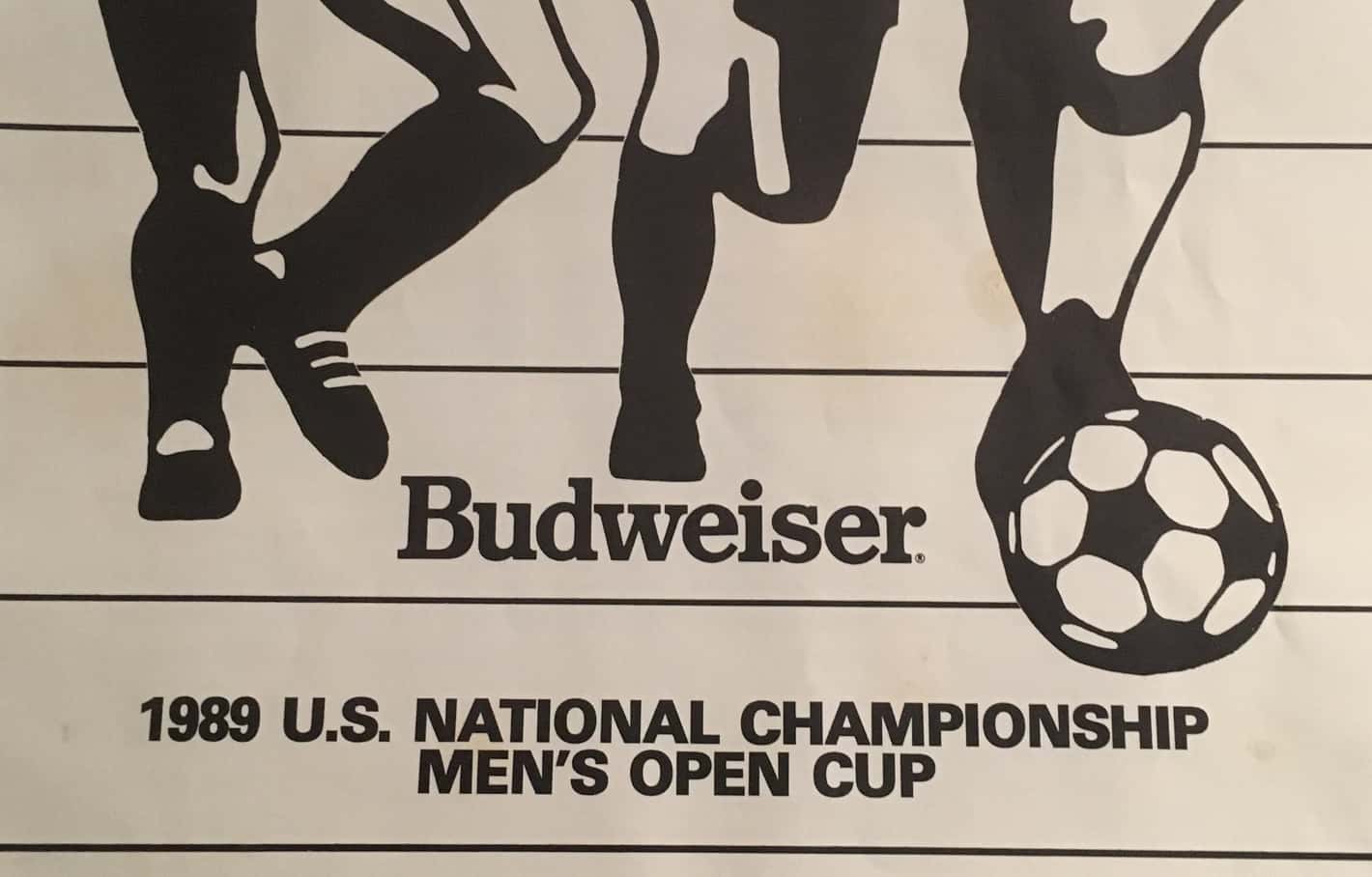 One of the Greeks defenders hit Singleton with a cheap shot after the ball nestled in the net. “I didn’t even notice it,” said the forward, who leapt to his feet and raced back toward the bench – to his friends and his stunned teammates – where he was mobbed. “They were jumping on me and high fiving and it was a special thing. That moment.”

The Kickers had gone close to winning the Open Cup before, and in the latter stages of those tournaments, Gogas often brought in high-octane players from the big colleges to boost the team’s chances. “But in 1989, we told him – we don’t want that this year,” said Singleton. “We wanted to do it with the guys who got us there. We wanted the guys who started it to finish it. We were all so up for it. The pride of being the only team from Florida to win it, that’s still with us.”

The organizers had a room set up at the stadium for a post-game celebration. Sponsored by Budweiser, there were plenty of free suds on offer. The Greek Americans declined to attend, perhaps still convinced Singleton hadn’t beaten the offside trap after all. “[Billy] Fautner was so overheated and dehydrated that we had to take him to the pool and dunk him to get his temperature down before we went to the tent,” Singleton remembered with a chuckle. 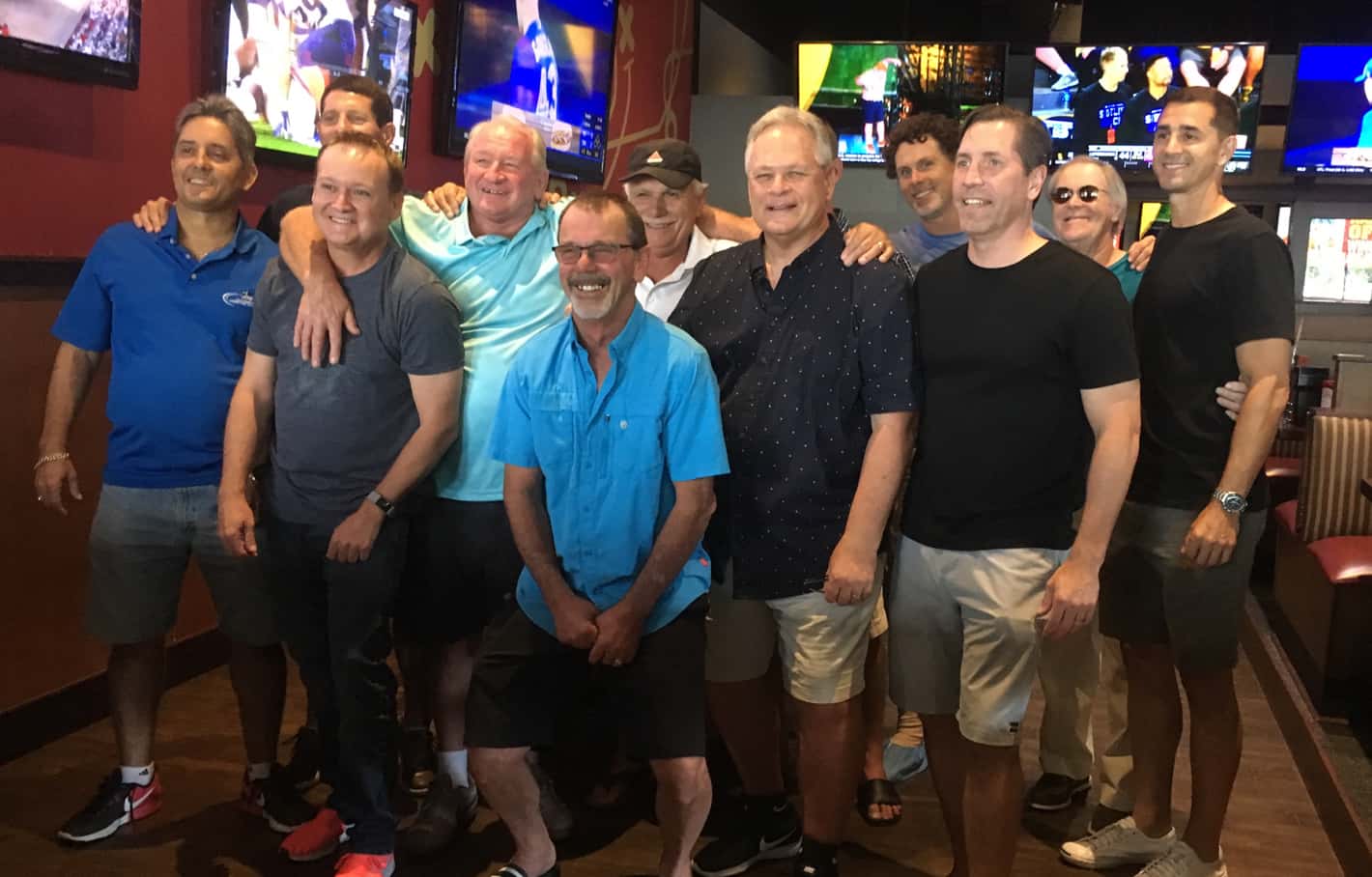 The St. Petersburg Kickers 30 years after their ’89 Open Cup title

“We did a little victory lap, even though there weren’t many fans there,” said Fossett, the guy who always did the most running in the midfield – the heart and soul every championship team needs. “I had to be carried on someone’s back because my legs were just gone. We celebrated and had a few beers and I’m not sure any of us knew really how big it was at that moment.”

“We all took a drink out of the Cup!” said Singleton, remembering how he hardly had a drop of sweat on him and his teammates were all near collapse with exhaustion. “There were big-time people from the Saint Louis Soccer scene there and highfalutin folks from the Federation, but I just remember my teammates and how we couldn’t stop smiling. We went back to hotel after that, and the party really started from there.”