Adam Grinwis – accustomed to the back-up role in Orlando City’s pecking order – has used his past experience in the Open Cup and his lightning reflexes to help drag the Florida underdogs into the 2019 Semifinals.
Jonah FontelaJuly 30 2019
Open Cup
“The less I’m noticed in a game, the better it is for the team,” said Adam Grinwis, Orlando City’s unlikely hero in the Quarterfinal win over New York City FC in the 2019 Lamar Hunt U.S. Open Cup. “But in a penalty shootout the pressure’s off you as a goalkeeper and you go back to when you were a little kid and you wanted to stand in the spotlight. You want to be the hero. And you get the chance to be.”
The shootout had a circus feel to it. It was one of those moments you’ll only get in the Open Cup. NYCFC scored late to draw level 1-1 and the deadlock stuck through 30 minutes of extra time. Having won the coin toss, the visiting captain chose to shoot toward the goal with nothing behind it but empty seats and a handful of New York fans. “I would have done the same thing – it just makes sense,” admitted Grinwis, who was outstanding through the preceding 120 minutes and the whole of Orlando City’s gritty Cup run.

The decision didn’t sit well with the hardcore home fans manning what’s known as The Wall behind the opposite goal. “We started to see a few of them running toward the other goal, the one where the penalties were happening, and me and some of the other players started waving them on,” said Grinwis. The fans were still filtering past a handful of helpless security guards when Tesho Akindele scored Orlando’s first kick. By the time Grinwis got himself set on his line, there was a swollen sea of purple humanity behind him.
“It was like the whole Wall had just switched goals,” said Grinwis, who sent the fans into ecstasy with a save on the Finn Alexander Ring. By the time he stared down NYCFC’s last penalty, the decider, he was deep in hero mode. “I was as focused as I’ve ever been in any game I’ve ever been a part of. I could sense the energy of the fans behind me, but I saved that first kick and then I immediately shifted my focus to saving another one. I was hardly paying attention to what our shooters were doing [only Dom Dwyer missed for Orlando]. All I could do was my job.”

The smile that says it all
Grinwis saved again from Maxime Chanot, low and to his right, and that was that. “That was the most surreal moment of my career,” said the red-header keeper, who was mobbed by his teammates and wore one of the widest, proudest grins you’ll ever see on a soccer field. “Initially, I just went into a kind of shock. I hardly knew the game was over. I asked myself: ‘did that just happen?’ Something just happened and I saw my teammates racing toward me and it was like ‘wow, we’re moving on in the Cup.’”
There are certain moments when there’s one hero and one hero only. In those rare moments, watch that player’s teammates to get a sense of what he means to them – on the field, in the locker room and, generally, in life. The pride on the faces of established stars like Sacha Kljestan, Nani and Dom Dwyer, the gratitude and genuine appreciation on display, told a bigger story than a man doing his job for pay on a given day. And the wide smile Grinwis wore there and then, well, that just said it all. “For 24 hours it felt like a dream,” said the goalkeeper, generously listed at 6-2 in club literature and wearing No. 99 on his back, an indication of his spot in the regular pecking order of Orlando City goalkeepers. “I woke up the next day and asked myself: ‘did that really happen?’ It was such a rare thing to have a moment with guys you genuinely care about. And to have them praise me like that – which is not my goal – it’s just an incredible thing.”

It’s no wonder Grinwis woke questioning the events of the night before. This ain’t the kind of thing that happens to him every day. His is the lot of the back-up keeper, fighting every day to be noticed. To crack the Starting XI. To do his part where and when he can as deputy to regular No. 1 Brian Rowe. Signed by Orlando in 2018 from second-tier Saint Louis FC, he had yet to make a single appearance in the league this year before coach James O’Conner took him aside and told him he’d be counting on him to be his Open Cup keeper for 2019. “It’s a funny position, goalkeeper,” said Grinwis, who’s had much work to do in Orlando City’s run to the Cup Semi. “Usually only one guy plays and if he does well, he stays. It’s rare you get a chance to change that, so when James came up to me and told me I’d be in for the Cup games, I was thrilled. Every game could be your last in the Cup. I had to have that mentality. I saw it as a real opportunity.” 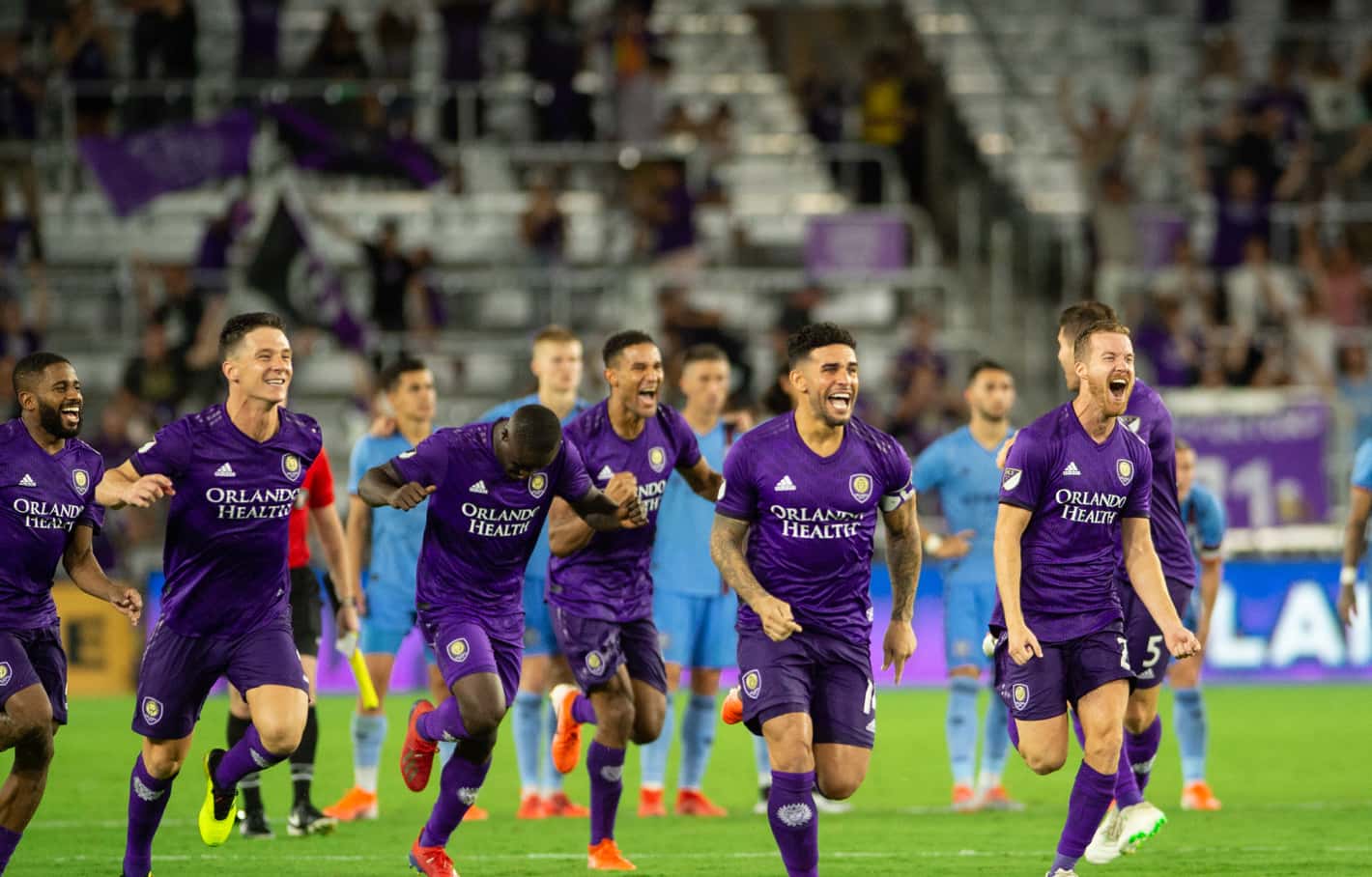 The Orlando City players rush to mob Grinwis in the Quarterfinal
It’s not Grinwis’ first Open Cup rodeo either.  Not by a long shot. He knows the magic – and the built-in opportunities alive in the 106-year-old competition – better than most. The keeper stood on his head back in 2012 when he and a band of spirited amateurs from Michigan knocked mighty Chicago Fire out in a classic upset of the modern-era.
“I was a sophomore at the University of Michigan and it was my first year with the Bucks [then the Michigan Bucks and now the Flint City Bucks], who always took the Open Cup very seriously [the former PDL and now USL League Two side have a long history beating pro teams in the Open Cup]. We won a game and then I kept a clean sheet against the Pittsburgh Riverhounds [second-tier pros] and then: ‘What? We’re playing the Chicago Fire of MLS? I thought to myself, ‘how is that possible?’ I was a kid in college and I dreamed of playing in MLS and now I had a chance to see how I stacked up against a team from the top professional league in the country.”

He stacked up just fine. Grinwis made a raft of saves in what was always going to be a busy day against the one-time MLS and four-time Open Cup champions from the Windy City. He conceded twice in the surreal environs of an indoor warehouse where the Bucks used to play their home games – known as the Ultimate Soccer Arenas. “We took them to overtime and we got a goal,” he said, still not quite believing the eventual 3-2 result. “We beat them. We beat the Chicago Fire.”
“Before the other night [the win over NYCFC] that was the best moment for me – a moment when I realized what was possible on a soccer field. It’s when the Open Cup became so meaningful to me,” said Grinwis, 27, and going through one of the best stretches of form in his professional career. “And, earlier this year, when James told me I’d be his man in the Cup, I was ready. I thought: ‘here we go again!’ 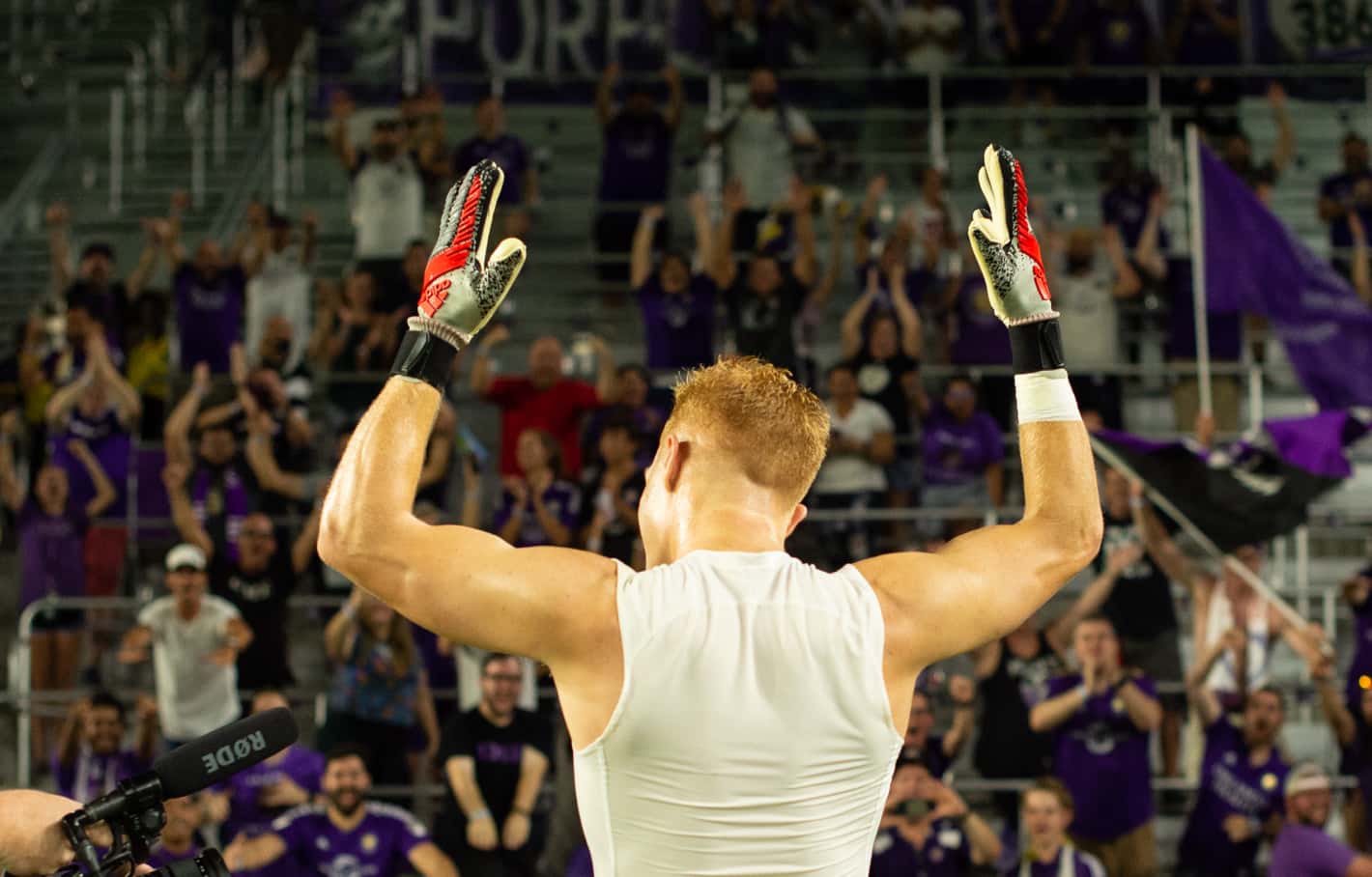 The King of the (New) wall at Exploria Stadium
While not quite the same level as the Michigan Bucks back in 2012, it’s safe to call Orlando City the underdogs still standing in a Last Four that includes free-scoring Minnesota United, defending MLS champs Atlanta United and Gio Saverese’s Portland Timbers – who knocked out MLS leaders LAFC in the last round. “I don’t know what it is,” Grinwis said with a sigh, ahead of a date with the defending MLS champions from Atlanta. “But it’s easy for people to look past us. They cast us to the side. But we don’t think any team is superior to us. It’s not arrogance; it’s belief in our fight.”
Grinwis may be on to something. It’s not always pedigree and reputation – or league form – that takes you to the Promised Land of the Open Cup. Last year’s champs, Houston Dynamo, didn’t even reach the MLS playoffs, but they managed to cobble together some of that grit and fight, the magic and luck you need to go all the way. Orlando City, currently ninth in the MLS Eastern Conference, have a little of that aura about them too. There’s a chip on their shoulder and they’re up for a scrap.

A Sasha Kljestan brace led @OrlandoCitySC to a 3-1 victory over @Memphis901FC
The lions await Thursday's Official Draw (10AM ET on @opencup & https://t.co/PMU8idFRux) to see their Round of 16 matchup in #USOC2019 pic.twitter.com/GQI7Ng3whf

“There’s a different weight to these Cup games,” added Grinwis, looking forward to the date with Atlanta on August 6 [ESPN+], where he has the chance to be the Exploria Stadium’s hero once more. “There’s nothing but top teams left and everything is on the line and you can feel that energy. We have a selflessness in this team and a unity that’s rare. Just look at guys like Sacha Kljestan and Nani – guys who’ve been top pros for over ten years. Look at how they’re fighting. These are the games you dream about.”
Tags
Open Cup
2019 US Open Cup