CHICAGO (Aug. 25, 2015) – Veteran defender Rachel Van Hollebeke has announced her retirement from club and country. Capped 113 times by the United States, she was a gold medal winner at the 2008 and 2012 Olympics and a starter at the 2011 FIFA Women’s World Cup, where she scored the clinching goal in the USA’s 2-0 opening match victory against Korea DPR. She is one of just five players to score for the United States as a defender in a Women’s World Cup.

Van Hollebeke will begin her second career this fall when she starts medical school in her hometown at UC San Diego. Medical school has long been a goal for Van Hollebeke. She was pre-med in human biology when a student-athlete at Stanford and took her medical school entrance exams in 2008. She was accepted into UCSD in 2011 but has been deferring until this fall. Her father, Donald, was a long-time heart surgeon in San Diego.

Van Hollebeke, who turns 30 on Aug. 26, made her first impact on the international scene as a key member of the U.S. team that won the 2002 FIFA Under-19 Women’s World Cup in Canada. She tore her ACL in the championship game of that tournament and would suffer another ACL injury before graduating from high school, the second on the opposite knee on her first day back on the field after the first surgery.

Long-known for her mental toughness, Hollebeke would go on to be a starter for the USA at the 2004 FIFA U-19 Women’s World Cup in Thailand (earning 30 total U-19 caps), and then play extensively for the U.S. Under-21 Women’s National Team (earning 17 U-21 caps). She got her first call-up to the senior National Team in July of 2006 and made her full National Team debut under Pia Sundhage against China at the Algarve Cup in March of 2008.

“I’m sad to be leaving the game because I love soccer, I love my teammates and I love Portland, but it’s also been a passion of mine for a long time to attend medical school, and this is the right time to start that journey,” said Van Hollebeke, who has played the last three seasons for Portland Thorns FC and was among the last 25 players vying for spots on the 2015 Women’s World Cup roster before it was cut to 23. “Soccer has been a huge part of my life, but I am so excited for this next step. I feel ready. I felt a shift this year and it was the right time to begin this part of my life.”

Née Rachel Buehler, she changed to her married name on the back of her jersey at the beginning of 2014, but it was her maiden name that produced one of the best nicknames in U.S. history. Known for her sweet disposition off the field, her crunching tackles and tenacious ball-winning on the pitch earned her the moniker of “The Buehldozer” during the latter part of her career.

Van Hollebeke started 84 of her 113 caps while playing center and outside back and scored five international goals. She is one of six players to play almost exclusively on the back line to earn 100 or more caps for the USA and scored on a header in her 100th cap as she captained the team against Iceland at the 2013 Algarve Cup.

Van Hollebeke grew up in Del Mar, California, north of San Diego, where she played youth club soccer for the San Diego Surf. She would go on to have a decorated career at Stanford, becoming a three-year captain and earning a slew of academic and athletic awards.

Van Hollebeke won league championships in both Women’s Professional Soccer (WPS) and the National Women’s Soccer League (NWSL). She was allocated to the FC Gold Pride for the inaugural season of WPS in 2009 and captained the club to the league title in 2010. She played in 2011 for the Boston Breakers. In the NWSL, she was allocated to the Portland Thorns in 2013, playing every minute of all 20 matches in which she appeared while helping lead the team to the league title in its inaugural season. She played the 2014 season for the Thorns and will end her career at the club when this season concludes. Due to her medical school commitments, she may not be available for the final two regular season games but could be available for the playoffs should the Thorns qualify.

“I feel so blessed to have had the experiences in this game and I’m so thankful to my family, my husband and of course, all of my coaches and the support staff I’ve worked with over the years,” said Van Hollebeke. “My teammates are all like my sisters, and I love them all so much. I will forever be honored to be a part of such an outstanding group of women. In the end, I’m just very thankful to U.S. Soccer for investing in me at an early age and for bestowing on me the greatest honor of representing the United States for so many years.” 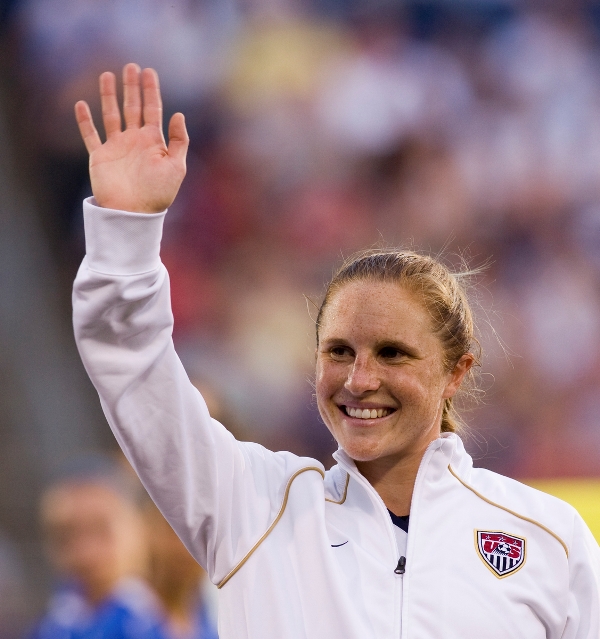