In 1997, when Christie Rampone made her U.S. WNT debut, the movie Titanic was still a few months away from hitting the theaters and the iPhone was 10 years away from revolutionizing the world.

Twenty years later, the legendary international career of U.S. Women’s National Team defender Christie Rampone has officially come to an end. Rampone, who played 311 times for the U.S., will be honored on March 4 in her home state of New Jersey when the WNT takes on England in the second game of the 2017 SheBelieves Cup.

Here are five things to know about the incomparable player known in the latter part of her career as Captain America:

An Unusual Start
Rampone went to college at Monmouth University in West Long Branch, New Jersey, on a basketball scholarship and was the starting point guard. During her senior year, then head coach Tony DiCicco called her to the WNT in January of 1997, just months after the USA had won its first Olympic gold medal. With nothing guaranteed, she chose to miss several basketball games for a shot at the National Team. 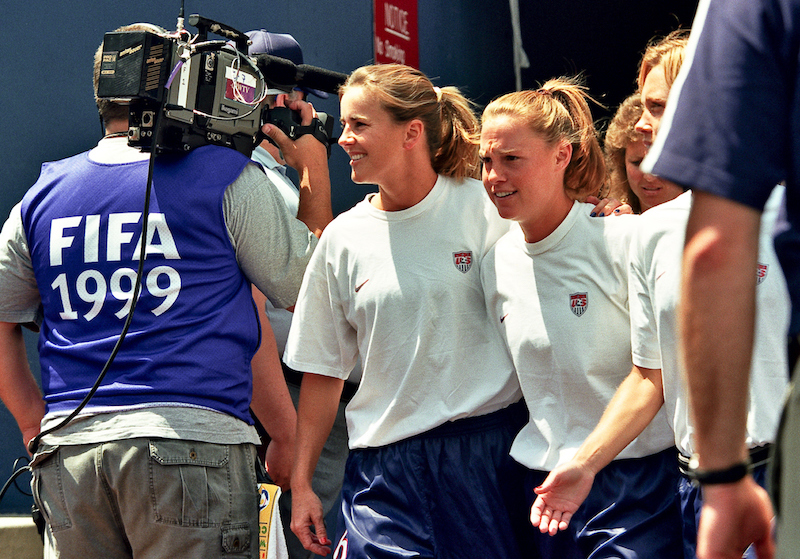 On the soccer field, Rampone also was a high-scoring forward for Monmouth, tallying 79 goals in her college career, but DiCicco was looking for athletic defenders, and she got her initial tryout in the back. After playing well in her first training camp in San Diego, she made the roster for a trip to Australia.

Rampone came off the bench in her first game, playing the second half, then started her second match. Aside from injuries and the birth of her two daughters (Rylie, born in September of 2005, and Reece, born in March of 2010), she was rarely out of the starting lineup for the next 19 years, starting in 272 of her 311 caps. She played 24,011 minutes in a U.S. uniform, second-best in U.S. history. 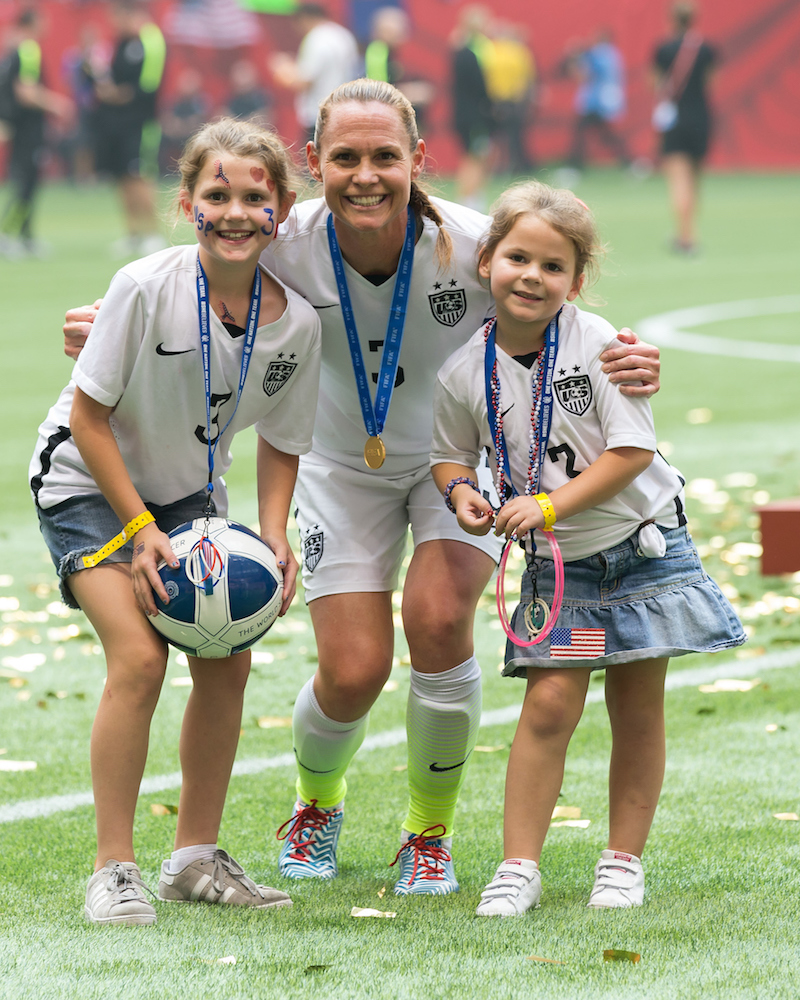 Our Captain America
Rampone was the captain of the team during two gold medal runs and one Women’s World Cup title. She played in 19 total Women’s World Cup matches, tied for sixth best all-time, and played in 22 Olympic matches, more than any U.S. player. During her tenure with the WNT, Rampone captained the USA on 113 ocassions.

“I am very thankful to all the coaches I played for, especially to Tony DiCicco for giving me that first chance, and I am especially thankful to all my teammates. They are inspiring people who helped a shy girl from the Jersey Shore grow as a person and a player and gave her enough confidence to one day be the captain of her country. They are truly my sisters. We went through so much together over the years, all the wins and some tough loses, but we always kept competing, and that’s something I’ll always cherish. To get to stand on top of the podium so many times with them was just amazing.”

That’s a Lot of Hardware
Rampone finishes as the WNT’s only four-time Olympian, a three-time Olympic gold medalist and an Olympic silver medal in 2000. She also finishes as a two-time Women’s World Cup champion, winning in 1999 and 2015, and is the eighth woman in U.S. history with two World Cup titles on her resume. 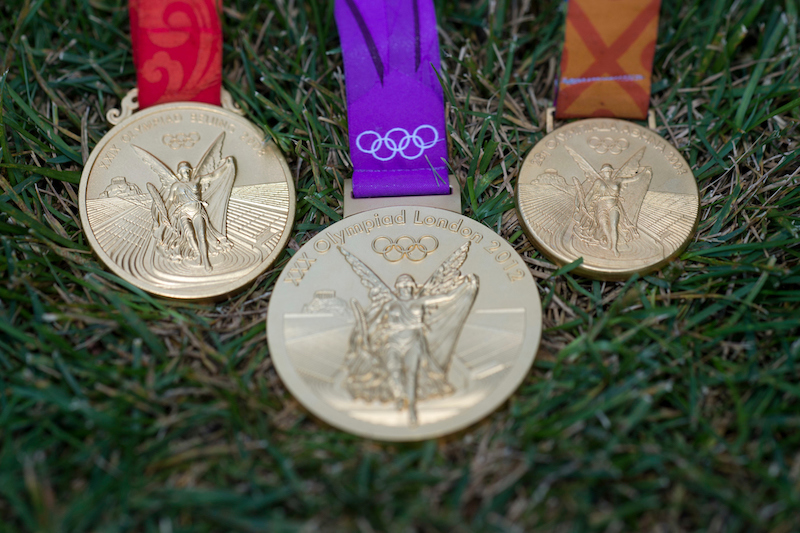 She and Kristine Lilly are the only two U.S. players to have played in five Women’s World Cup tournaments. Rampone was a starter in seven of the nine world championships she played, serving as a reserve only in her first in 1999 and her last in 2015. 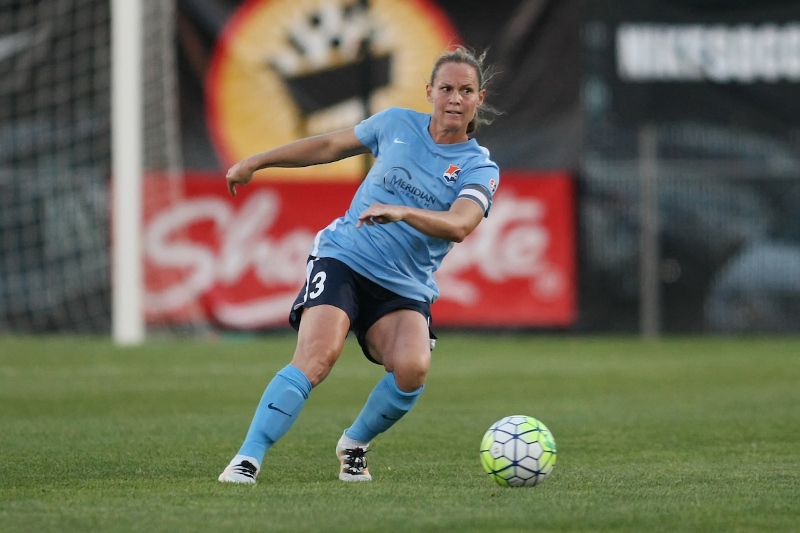 In July of 2009, she took over as head coach of Sky Blue FC and improbably led them to the WPS championship as a player-coach, playing in the championship game despite being three months pregnant.

The Fittest
One thing that every teammate will always say about Rampone is that when it came to fitness, it was hard to top her. Even after having two children, Rampone quickly found her way back to the field, making being a mother and an elite, world-class player, look easier than it was. Following the birth of her first daughter Rylie, Rampone was back on the field 112 days later. And after giving birth to Reece, she was back in 90 days. That’s an example of determination and a commitment to fitness before during and after her pregnancies.

Despite playing into her 40s, Rampone was still one of the fittest and fastest players on the team throughout the duration of her career.

“I’ve always enjoyed intense competition, and with the U.S. team I got to pursue those goals at the highest level, which is part of what kept me going for so long,” Rampone said.