Playing in a Final is something special, and in soccer most players never even get the opportunity.

The current U.S. Men’s National Team roster that heads into Wednesday’s CONCACAF Gold Cup Final against Jamaica has a wide variety of experience in championship matches, and all have slightly different outlooks on what’s ahead against the Reggae Boyz.

One of the youngest members on the U.S. Gold Cup roster, Kellyn Acosta has played a big role in getting the MNT to Wednesday’s finale. The recently turned 22-year-old has appeared in four of the five matches and led all U.S. midfielders with 256 minutes played. Though he admitted to struggling early on in the tournament, Acosta’s performances have grown with every match, with his best coming in the USA’s 2-0 Semifinal win against Costa Rica.

“To be a part of this team going into the Gold Cup Final means everything,” he told ussoccer.com. “We put in a lot of work. We’ve been with each other for over a month, a ton of practices, traveling throughout the cities and we’ve just put a lot of effort into this. I know the guys and myself are excited for the opportunity. We’re going to give it our all and hopefully we can get the result. 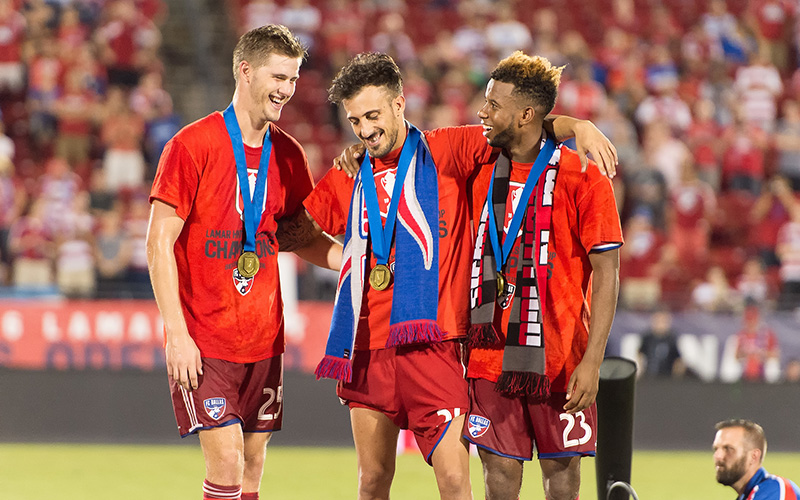 While Wednesday’s game will be his first final with the U.S. Men’s National Team, Acosta has tasted victory in a championship match before, with the young midfielder anchoring the FC Dallas midfield in the club’s 4-2 win against New England Revolution to win the 2016 Lamar Hunt U.S. Open Cup.

Experiencing his first professional final as a 21-year-old, Acosta recalled the mentality he took going into that match.

“It was to be just 100 percent concentrated. It’s a game where a lot of emotions can run around you. I’ve only played in so many finals in my career, so just to be a part of that was definitely chilling, but I was glad to be a part of it. I didn’t want to let the emotions overwhelm me. When I got in the game, I was a little nervous at first, a little anxious, and there was a lot of adrenaline. Once the game kicked off, I just eased my way into it and thought of it as another game. I think that’s the best approach. Obviously it’s a game with a lot of magnitude, but if you go out there and stick to things you know, do what you’ve been doing, then great things will happen.”

With 38 goals, Jozy Altidore is the U.S. MNT’s third all-time leading scorer and his 16 goals in World Cup Qualifying place him second behind only Clint Dempsey. But when it’s come to featuring for the U.S. in tournaments, the striker has been marred by a series of hamstring injuries.

Since coming onto the National Team scene in late 2007, Altidore has missed out on playing a full tournament - due to injury or recovery - on four occasions. The list includes the hamstring ailment that occurred 19 minutes into the 2014 FIFA World Cup, leaving the 2011 and 2015 CONCACAF Gold Cups early and missing out all together on the USA’s run to the Semifinals of last summer’s Copa America Centenario.

While he’s appeared in a few club Finals – notably scoring in AZ Alkmaar’s 2-1 Dutch Cup win vs. PSV Eindhoven in 2013 and winning back-to-back Canadian Cups – Altidore has played in only one championship match all-time for the U.S. Men’s National Team: the 2009 FIFA Confederations Cup Final, a difficult 3-2 defeat to Brazil. 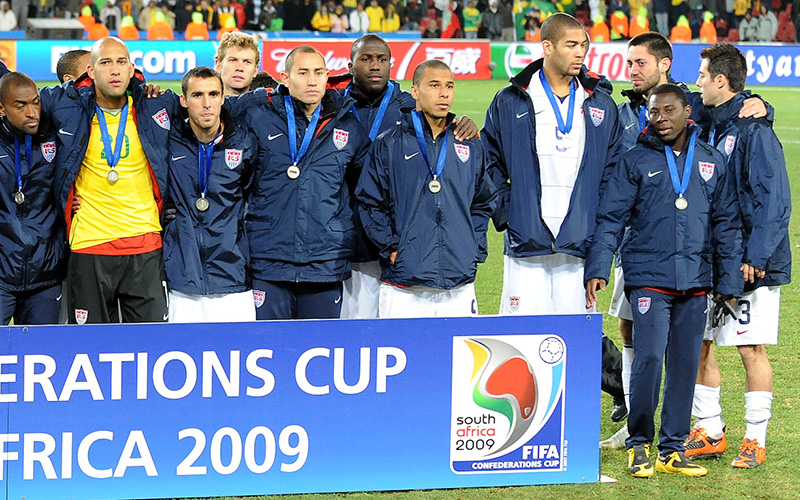 “I’ve been unlucky with injuries, them being untimely, and so for me it means a lot to make it here,” Altidore told ussoccer.com. “I’ve had this tournament circled on my calendar for a lot of reasons, to get back playing with the National Team in a tournament and obviously to win something. It doesn’t come around often that you get these opportunities to win a trophy, so I’m really excited to be a part of the team. I think we have all the attributes, all the tools to make history.”

Altidore has enough experience playing against the Reggae Boyz to know they’re a team that can’t be taken lightly. The veteran forward was on the field for the USA’s first-ever defeat to Jamaica, a 2-1 World Cup Qualifying loss on Sept. 7, 2012 in Kingston. With Wednesday’s opponent already out of contention for next summer’s World Cup, Altidore believes the back-to-back Gold Cup Finalists will be as dangerous as ever.


“Jamaica, as well as in the last Gold Cup, did a good job in making the Final. I expect a tough team, a tough game – a hungry team. They’re not in the Hex, they can’t qualify for the World Cup, so this is essentially a World Cup game for them. It’s a huge game, a huge opportunity for them and their Federation to make strides, so we have to be ready for a really physical team, a fast team, one that’s athletic and a team that’s going to be playing with a chip on their shoulders.”

At 38 years old, goalkeeper Tim Howard is the eldest member of the U.S. MNT’s Gold Cup roster and overall player pool. With 117 caps since 2002, Howard is as well-seasoned on the international scene as he is at the club level, having spent 13 combined seasons with Manchester United and Everton before returning to M.L.S. with Colorado Rapids last season.

“Any time you get an opportunity to play in a Final, you have to grab it with both hands,” Howard said. “You have to get that trophy because it will stick with you for a long, long time if you don’t. I’ve played in a lot of Finals in my career and haven’t won as many as I would have liked, so these moments don’t come very often – they’re important.”

Success in a final came early during his stay in England, backstopping Manchester United to a 3-0 win against Millwall in the 2003-04 FA Cup. He returned to the same match five years later with Everton, but the Blues fell 2-1 to Chelsea at Wembley Stadium. 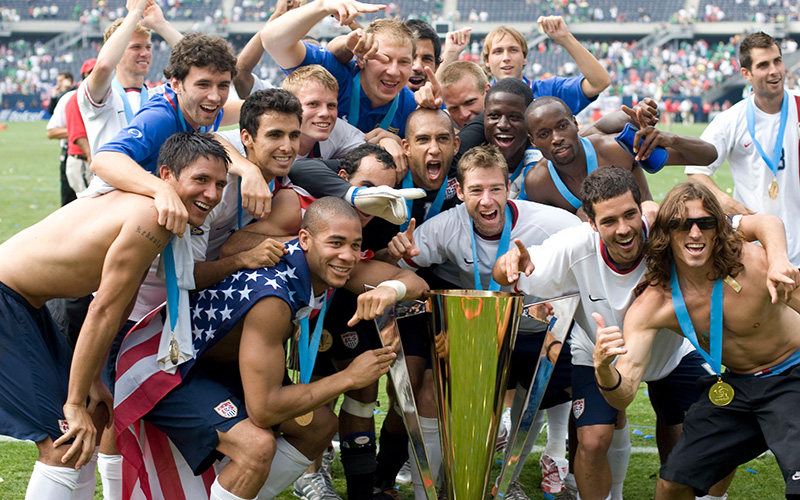 “That’s the icing on the cake. Any time you win a Final, the rest of it is just pure elation. You get to celebrate with your teammates and coaching staff, your loyal, dedicated fans, family and friends – it’s just the ultimate. You put so much into the tournament and it’s just this sense of relief – you’ve got all this pent up energy and anxiety and you get an opportunity to express yourself finally and lift a trophy. You realize there is no more – it’s done, it’s finished. It’s a beautiful moment.”

He’s also faced bitter defeat in a U.S. shirt, serving as the goalkeeper in the 2009 Confederations Cup loss to Brazil and 2011 Gold Cup defeat to Mexico.

That 4-2 loss to El Trí was Howard’s last appearance in a Final at any level, and looking back he pulled no punches about the disappointment.

“Disappointing is an understatement,” Howard said about the 2011 defeat. “We got our butt kicked that day and it’s never easy. You work hard for something, you put in all your effort and you come out on the losing end, it’s a tough pill to swallow. I’ve never claimed to be a good loser, I hope I never am, but those days are tough.” 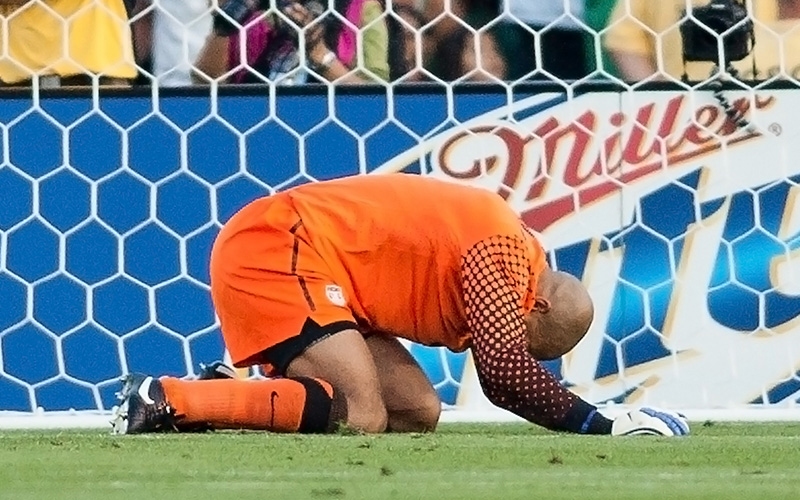 As the elder statesman on the U.S. team, Howard has plenty of advice for some of the younger players that may be experiencing their first championship match on Wednesday.

“I think it has to be a fine balance when you go into a Final. Mentally you have to be focused and understand what’s at stake. I think it’s important to have that heightened sense of anxiety and knowing what that moment means, but leaning on your experience to calm the nerves if that’s possible, play within yourself and not try and do too many crazy things individually. You have to collectively be a solid group and be focused.”

Given all that the U.S. team has been through since two defeats to start Final Round FIFA World Cup Qualifying last November and the return of Bruce Arena as U.S. MNT head coach, what would a win against Jamaica on Wednesday mean?

“It would be a feather in all our caps,” Howard said. “You want to be remembered as a winner, and you can only do that by producing the goods in the big moments. I think this team is ready for it.

“A few months ago we weren’t at this point. Teams go through ups and downs and changes ultimately have to be made, but it’s good to see that not only are we playing good football, which is clearly the most important thing, but it’s also that the camaraderie in this group is very good. There’s a big mix of old – very old in my case – and some good young guys. For us to all get along together and have one vision is a testament to not only the players, but Bruce Arena and his coaching staff.”