No. 1 and No. 2: Sullivan and McCaskill Join NWSL

On Thursday, January 18, 2018, a new chapter began in the lives of U.S. WNT midfielder Andi Sullivan and U.S. WNT forward Savannah McCaskill when their names were called at the top of the 2018 NWSL College Draft in Philadelphia.

With both players currently participating in the U.S. WNT’s January Camp in California, Sullivan and McCaskill were unable to attend the draft, but watched the live stream from the courtyard of their hotel in Los Angeles with a cup of coffee in hand (it was just after 7 a.m. on the West Coast), feeling the anticipation and excitement of someone whose lifelong dream has finally become a reality.

The 22-year-old Sullivan, who led Stanford University to the 2017 NCAA title, became the fifth consecutive No. 1 overall pick to be drafted while concurrently participating in a WNT’s January Camp. The Lorton, Virginia native was taken by her home area Washington Spirit, where she’ll join U.S. teammate Mallory Pugh. Sullivan follows in the footsteps of former NWSL No. 1 picks and USA teammates – Crystal Dunn (2014), Morgan Brian (2015), Emily Sonnett (2016) and Rose Lavelle (2017).

Sullivan will get to return to an area and community that she loves deeply and helped her become the player she is today.

“Returning to the DMV will be very cool,” Sullivan said. “I was on the West Coast for four years so coming home will be special. To be near my family and friends will be fun. This is a place that gave me so much and I’m excited to give back to them.”

Another 1: @sunnysulli becomes the fifth consecutive #USWNT player to be picked first overall in the #NWSLdraft. Congrats, Andi! 🇺🇸👏

The Stanford product is coming off a phenomenal senior year for the Cardinal, after which she won the MAC Hermann Trophy, awarded to the top college player in the country.

“Not many people get to say that they went No. 1 in their draft class, so that’s exciting,” Sullivan said. “It’s been a dream of mine to play professionally and I’ve watched this league for a long time now and I’m almost in disbelief that it’s now my turn to take this next step and join the NWSL. I’m excited to start my professional career.”

Sullivan earned her first cap with the USA back on October 19, 2016, and went on to play in three more games that year for the WNT before an ACL injury during a playoff game with Stanford sidelined her for much of 2017. She returned to the WNT a year later, playing in her first match back on October 19, 2017, when she started against Korea Republic in New Orleans.

McCaskill, who is uncapped with the senior WNT but has earned six caps with one goal at the U-23 level, became the No. 2 selection after a stellar senior year at South Carolina, where she scored eight goals with nine assists in 2017 and led the Gamecocks to their first NCAA College Cup appearance in school history.

“I’ve wanted to play professional soccer since I was a little girl, and our league has been growing and it’s going to be cool to be a part of this,” McCaskill said. 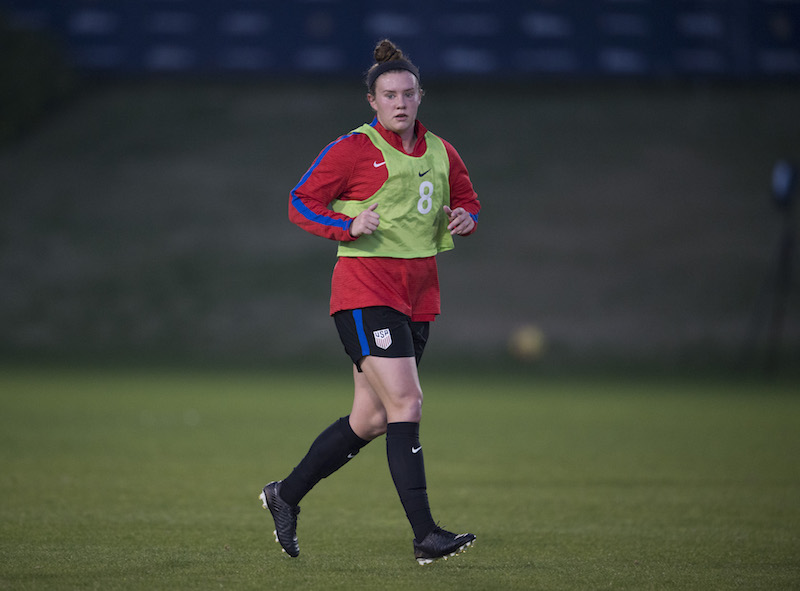 Savannah McCaskill was the No. 2 overall pick in the 2018 NWSL College Draft.

A strong and powerful attacker, McCaskill, an All-American and MAC Hermann Trophy finalist in 2017, has previously trained with the full WNT, but this was her first time named to an official training camp roster by U.S. WNT head coach Jill Ellis.

“The dream is to play for the WNT and play in a World Cup, so being part of January Camp and get a feel of how things work around here and around the best players in the world has been really cool,” McCaskill said. “Trainings are intense and faster but I know this is going to help me become a better soccer player and I just want to learn and take advantage of every opportunity.”

Both McCaskill and Sullivan are part of the 24-player roster currently training in Los Angeles with each hoping to make the final 18-player roster that will dress on Jan. 21 when the USA takes on Denmark at San Diego County Credit Union Stadium to kick off its 2018 schedule (4:30 p.m. PT / 7:30 p.m. ET on ESPN).