Tierna Davidson is not your average 19-year-old, on or off the field.

Davidson, who is considering a major in biomedical computation, bioengineering or human biology at Stanford University, carries herself with a maturity that belies her years.  She speaks calmly and eloquently. She chooses her words carefully and is detailed and thoughtful in her answers. She is also confident and in control. All those qualities were brightly on display during the 2018 SheBelieves Cup, on and off the field. 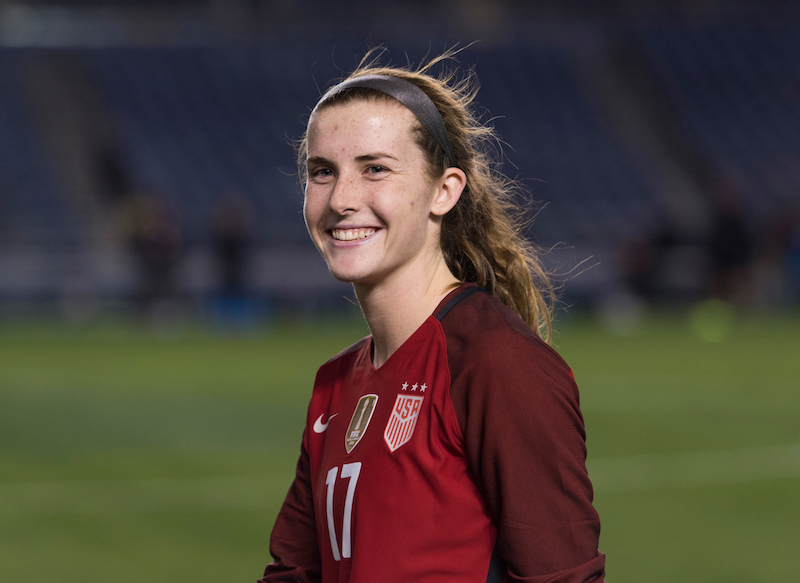 She is a sophomore at Stanford and just 19-years-old

Davidson started and played all 90 minutes in all three games of the tournament. She performed extremely well against three of the world’s best teams, all while playing in the key position of central defense alongside Abby Dahlkemper, no veteran herself with just 17 caps.

At 5-foot-10, Davidson is long and lean, remarkably fluid on the field and seemingly in synch with whatever is going on around her. She was one of only three U.S. players, along with Dahlkemper and goalkeeper Alyssa Naeher, to play every minute of the SheBelieves Cup.

She won balls in the air and on the ground. She chased down players on counter-attacks and gritted out timely clears. With the ball at her feet she was superb, making quality decisions and helping set the rhythm of the U.S. attack, often breaking a line when she darted into midfield with the ball to unbalance the defense. She even made a goal line save with just five minutes left against England to thwart an equalizer during the de facto tournament championship match. If England had scored, it would have won the tournament. 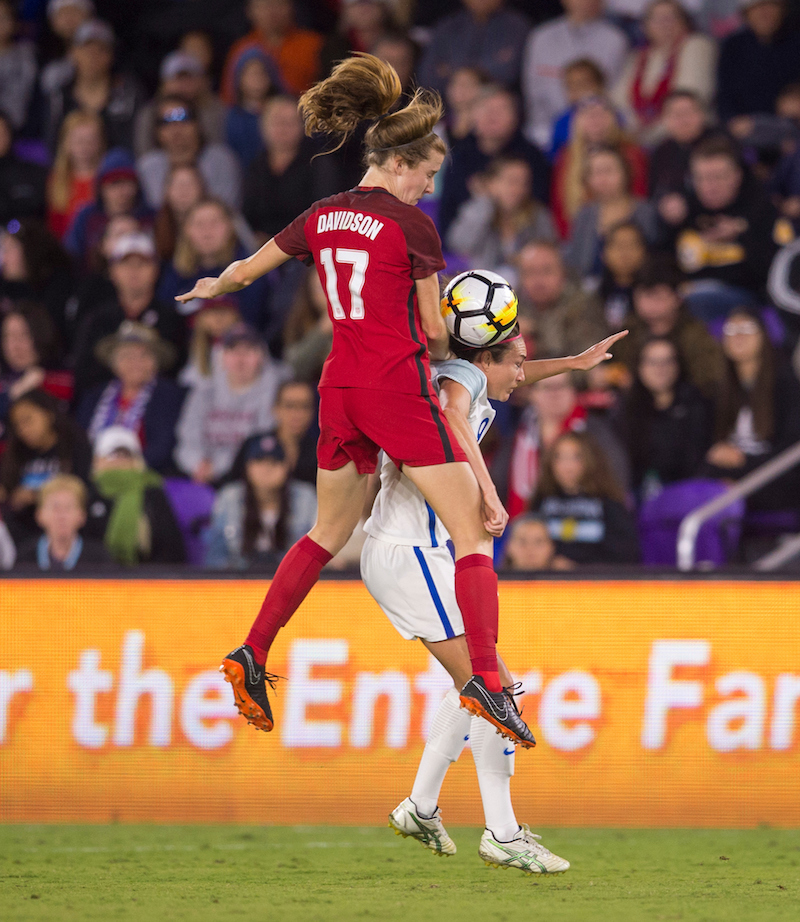 Battling for a ball against England on March 7

Even though she was by far the least experienced starter on the field, Davidson often looked like one of the best players. For those not versed in the 2018 U.S. Women’s National Team, it was likely hard to believe the games marked only her second, third and fourth senior team caps. She grew with every game and against England was a key player in securing the victory that helped the USA win the tournament.

“Tierna was fantastic today,” Ellis said on March 4 after the 1-1 draw vs. France. “Her timing to come across from the weak side and snuff out chances in the box was excellent. Her aerial presence and her composure on the ball were great. She’s a very solid player and her end-point is going to be very high, but I already like where she is. She’s got a great left foot and she was very good today with a lot to deal with.”

Three days later, Ellis once again was impressed with Davidson, this time pointing out how difficult it is for a young defender to excel against this kind of competition in a tournament environment.

“This was her best performance,” Ellis said after the U.S. WNT defeated England 1-0 to earn the 2018 SheBelieves Cup title. “She’s been so solid and calm. I told her that I was so incredibly proud of her. To step in at that age in her first real time with this team and to be at this kind of level of competition, it speaks volumes about her and I’m really excited about where she’s headed because she was fantastic tonight.” 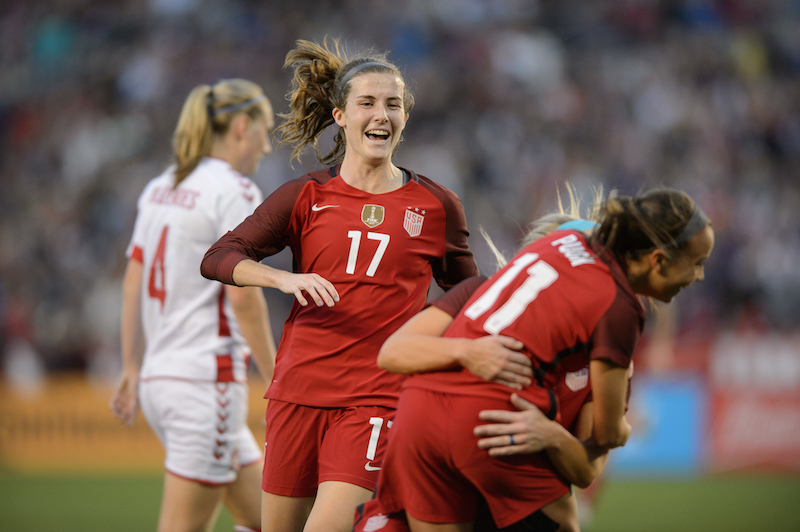 She earned her first cap and career assist with the WNT on Jan. 21 vs. Denmark

With a foot injury to veteran center back Becky Sauerbrunn sidelining her for this year’s January training camp and the friendly match against Denmark on Jan. 21, Davidson was given the starting nod against the Danes in San Diego and earned her first cap. She was the third teenager since 2013 to earn a first cap for the WNT. Mallory Pugh (17 in 2016) and Lindsey Horan (19 in 2013) were the most recent teenagers to debut. Davidson still has two years of college soccer left and has already led Stanford to an NCAA Championship, playing a key role in the Cardinal’s run to the title last season in the same stadium where the USA took down England to win the SheBelieves Cup.

Davidson performed well enough during that January camp in Los Angeles in what was her first extended training time with the U.S. team to earn a spot on the SheBelieves Cup roster and, with Sauerbrunn still recovering, got a chance to perform against the No. 2, No. 3 and No. 6 teams in the world while facing off against some of the world’s most dangerous strikers. The teenager delivered and earned the respect of her teammates.

“Tierna is just a really calm player who is always going to find the best solution in the back,” U.S. WNT forward Alex Morgan said after the England game. “When she initially came in with this team and played outside back and I think it was a bit out of her comfort zone, but they moved her to center back and immediately she looked like a veteran. With Becky’s injury and her not being here for the last couple of camps, I feel like [Tierna] stepped up and matured incredibly fast. If someone were watching I don’t think they would say she’s 19-years-old. She’s was fantastic for us, and [against England] she saved a clear goal right off the goal line.”

While the core of players that Ellis will move forward with in 2018 is mostly set, there is always a chance for a new player to get a call-up, earn a chance to play and show she’s got what it takes to help the team.

Davidson’s performances over just four games are a glowing example of that kind of opportunity. 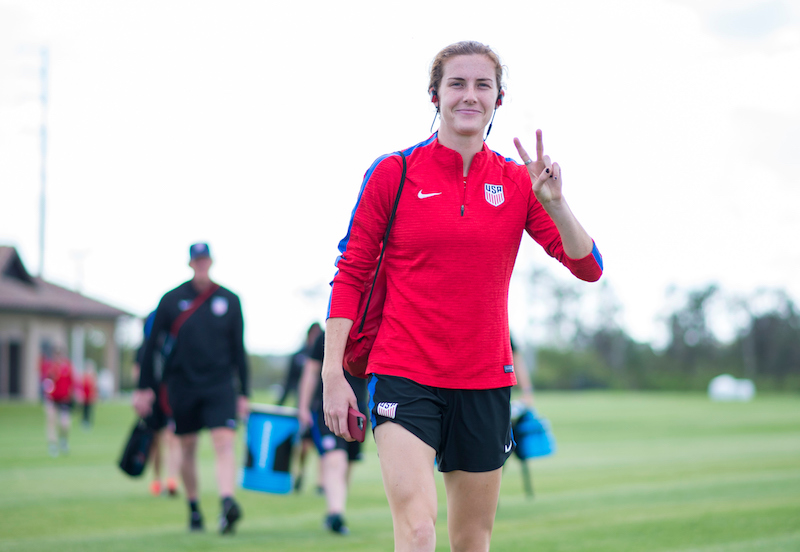 “This was an invaluable experience,” Davidson said after the tournament. “It was the best way to get to know the team, to get comfortable against some world-class teams and to really find my footing within the team. Playing against teams like that kept me on my toes and I got less nervous as the games went on, so in that sense the game slowed down a bit, but of course, I had to speed up my play as well. Before the games, it’s hard not to think about who you’re playing, but once you’re on the field, it’s just another game and another opponent. Whether it’s college players or world-class players, I’m ready to step up to it.”

On and off the field.